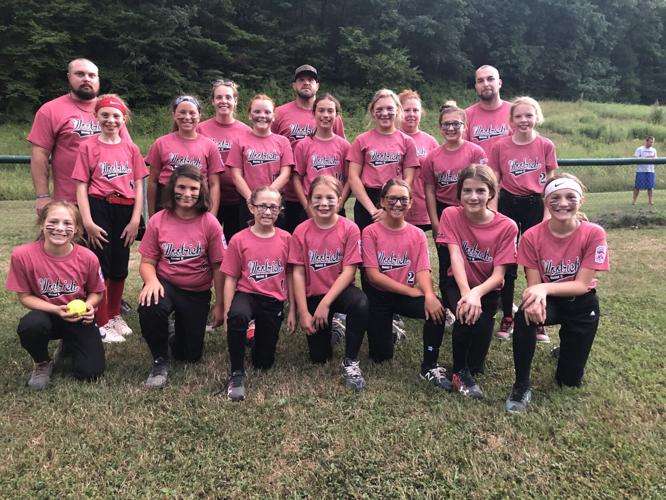 Woolrich’s Minor A team poses for a team picture moments after completing a perfect season with a 14-3 win over Nippenose on July 29, 2020. 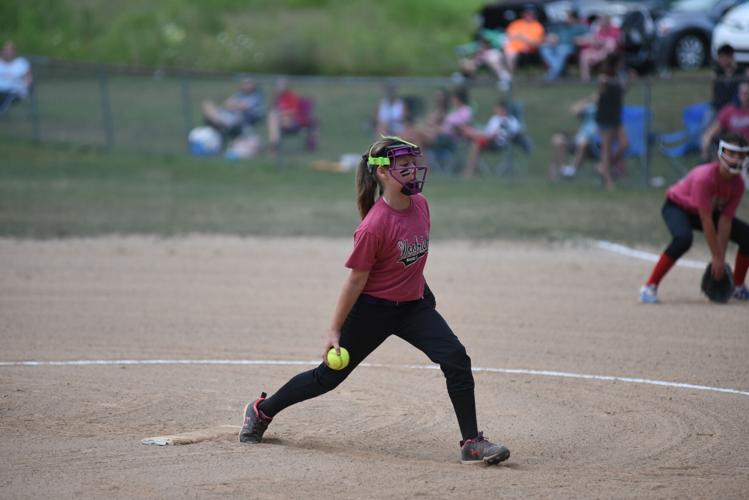 Layla Brumbaugh delivers a pitch for Woolrich during the final game of the season on July 29, 2020. 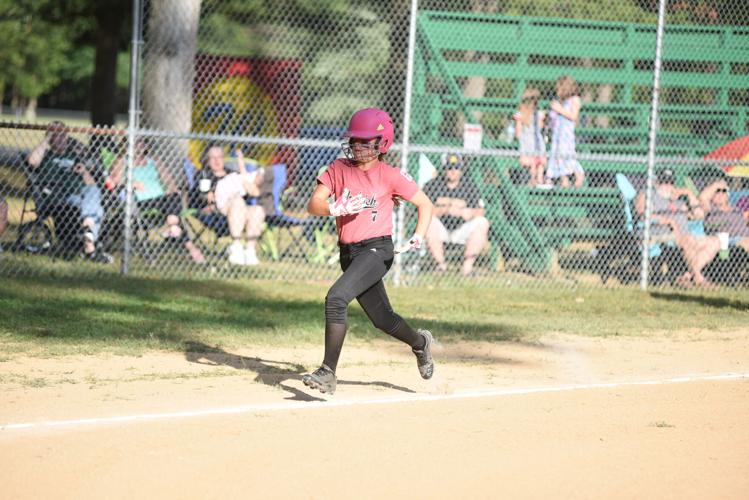 Woolrich’s Audrina Whitman scores a run in the third inning of a game against Nippenose. Whiteman hit three singles to help Woolrich finish a perfect 10-0. 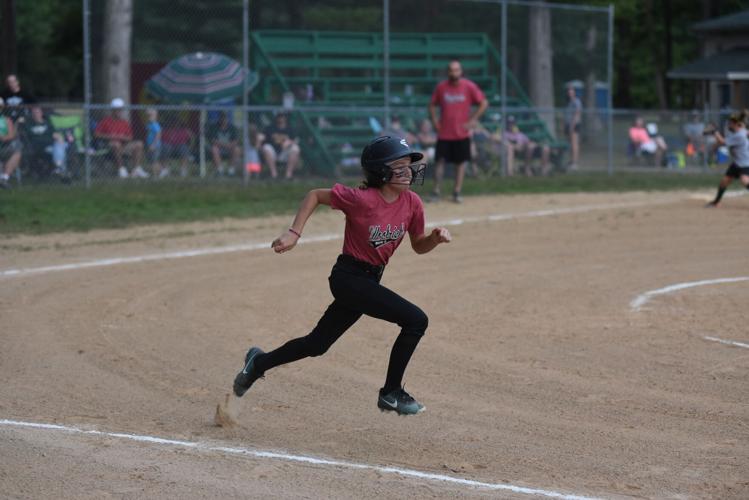 Woolrich’s Jaylynn Stringellow hustles as she attempts to beat out a ground ball in the infield during a game against Nippenose on July 29, 2020.

Woolrich, Pa.—Layla Brumbaugh watched for nine consecutive contests as game balls were handed out to players on her team.

She wanted one of her own and decided to ask her manager before the final game of the season if she could throw an inning. She wanted a chance and she delivered as Woolrich defeated Nippenose 14-3 Wednesday night to closeout the season a perfect 10-0.

After the win, Brumbaugh was given the game ball and cheered by her teammates. She was asked to pitch for the first time all year in the biggest situation and delivered a final win for her team to complete a perfect ten-game run.

“I’m really happy, because I’ve been asking my coach can I pitch,” Brumbaugh said. “I wanted to pitch so bad because everybody when they pitch the got the game ball. I thought I was going to get a game ball, too.”

The intentions were pure for the young softball player, but the dream still required manager Travis Prough’s go-ahead. It would be a big decision as the team’s perfect record hung in the balance.

Brumbaugh worked throughout the week leading up the game and earned her managers confidence to give her a chance. She was supposed to go just one inning but ended up pitching to the fourth.

“She’s been working so hard all season long, practicing how to pitch,” Prough said. “We gave her a shot and it was only supposed to be one inning. She was on fire.”

Brumbaugh, who was so new to pitching she had to be reminded by her teammates to throw underhand, might have been a little nervous to start. She walked the first three batters and faced a bases loaded situation just a few batters into her first start. She didn’t even blink.

Brumbaugh issued strikeouts to the next three hitters. Nippenose scored a run in the first inning but would be blanked the next two as Brumbaugh picked up three more strikeouts over the run. Payton Hull then entered in the fourth to help complete the game.

Brumbaugh secured her first win of the season, helped her team finish 10-0, and was rewarded the game ball at the conclusion for her efforts. It was a dream moment, but one Brumbaugh just wanted to enjoy with her team.

“It’s really good, because I usually don’t get to spend time with my friends,” Brumbaugh said. “I miss my friends with this Coronavirus stuff.”

Brumbaugh did her work from inside the circle, but all the girls came to play. Audrina Whitman hit three singles to dive in five runs. She also scored twice.

“I was looking for anything down the middle,” Whitman said. “I tried to hit those pitches. It felt really good.”

Whitman has been a constant contributor on the team and Wednesday’s game was no different. She connected with a single in the first inning to help her team take the lead for good. In the third she drove in two more runs with the game’s hardest hit ball. In the final inning she capped a remarkable run at the plate with her third single to drive in the final two runs of the game.

“It’s really fun,” Whitman said. “We were trying to do it. We started to feel pressure, but we just had to have confidence.”

Much like Brumbaugh the perfect season was nice for Whitman, but it was more about spending time with her teammates and friends.

“It felt good, because of being at my house all the time,” Whitman said. “I got to be outside.”

Every girl played and contributed to the win and perfect season overall. It was a bright spot in the area and one that helped both sets of teams, coaches, and parents forget about the world for a little bit.

“These girls were given the opportunity to play softball,” Prough said. “These girls had nothing and when they found out we would be playing they came back committed.”

Woolrich was given two weeks to prepare for the season. Once they were given the go ahead to start practice all the members of the team came out quickly and got to work.

Prough could see the progress as all players as they worked to improve. Each team member worked to help with different roles. Each made sacrifices to help each other.

Esports: A new wave of athletes coming to a school district near you