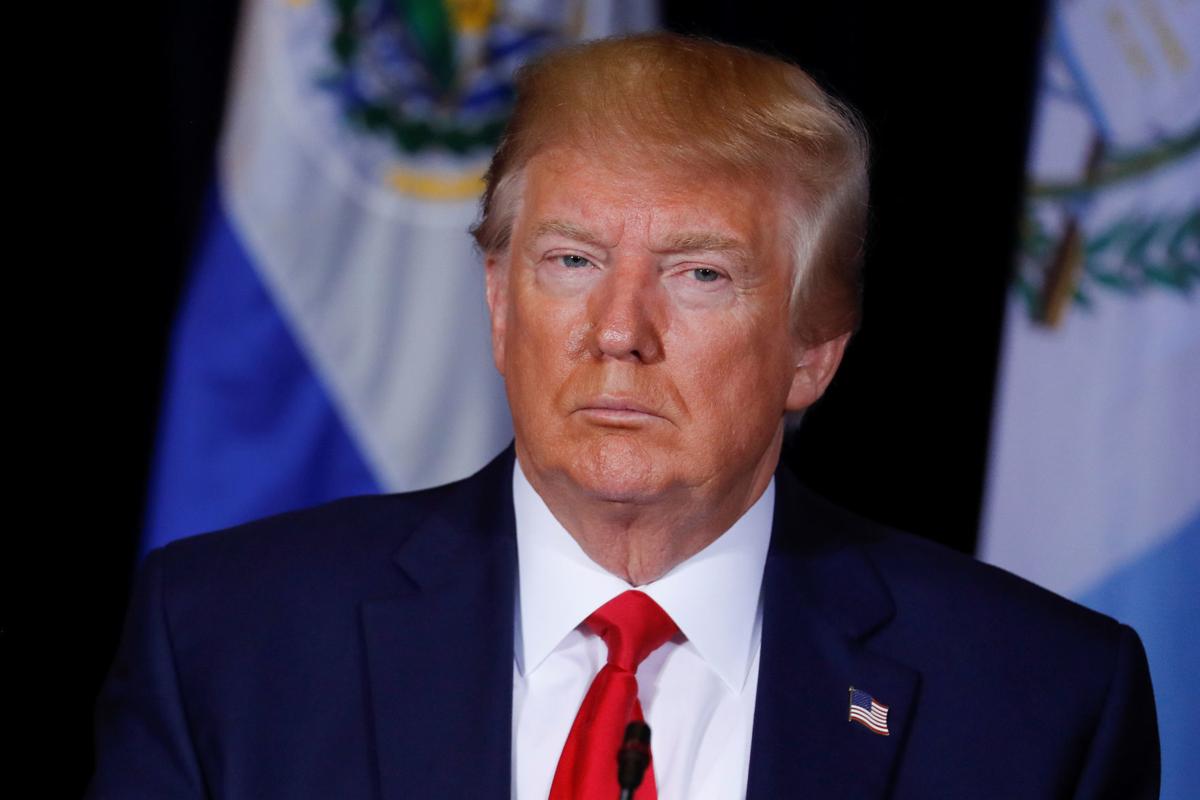 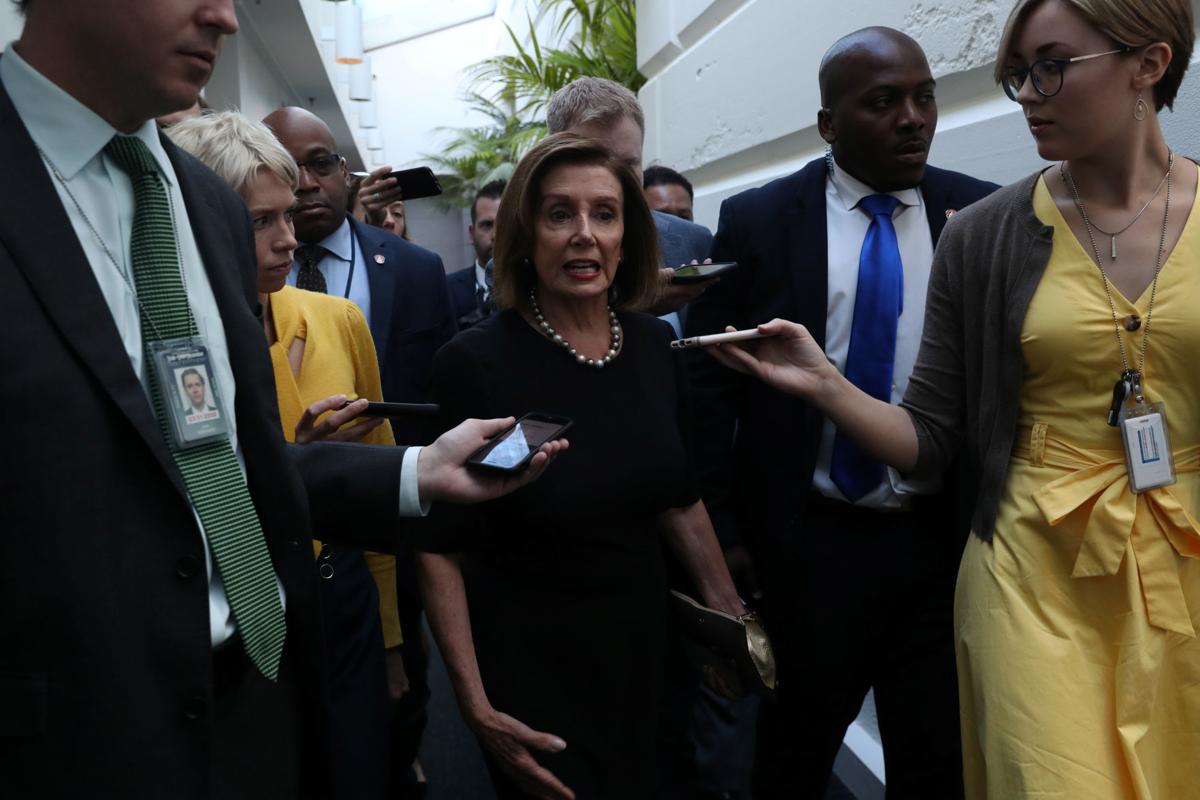 WASHINGTON (Reuters) - President Donald Trump pressed Ukraine's president to investigate a political rival, former Vice President Joe Biden, in coordination with the U.S. attorney general and his personal lawyer, according to a summary of an explosive July phone call released by the Trump administration on Wednesday.

Setting up a dramatic political showdown that threatens Trump's presidency, House of Representatives Speaker Nancy Pelosi on Tuesday said the Democratic-led chamber was launching an official impeachment inquiry and directed six committees to proceed with investigations of the president's actions.

Democrats have accused Trump, a Republican who is seeking re-election next year, of soliciting Ukraine's help to smear Biden, the front-runner for the Democratic presidential nomination, before the 2020 election.

The half-hour July 25 call between Trump and Ukrainian President Volodymyr Zelenskiy occurred after Trump had ordered the U.S. government to freeze nearly $400 million in American aid to Ukraine. The administration only later released the aid.

According to the administration's summary, Trump told Zelenskiy that Attorney General William Barr, the top U.S. law enforcement official, and Rudy Giuliani would speak to him about re-opening a Ukrainian investigation into a Ukrainian gas company for which Biden's son Hunter had served as director.

"The other thing, there's a lot of talk about Biden's son, that Biden stopped the prosecution and a lot of people want to find out about that, so whatever you can do with the Attorney General would be great," Trump said, referring to Barr.

In the summary, Trump never explicitly tells the Ukrainian president that the U.S. aid is contingent upon him investigating Biden, but Trump emphasizes the importance of American financial support before pressing him for action on Biden.

"I will say that we do a lot for Ukraine," Trump said. Trump then said German Chancellor Angela Merkel "doesn't do anything" for Ukraine but that "the United States has been very, very good to Ukraine."

According to the summary, Zelenskiy responds that Trump is "1,000%" right, and thanks Trump for "your great support in the area of defense" and expresses interest in making another U.S. arms purchase.

In raising the Biden issue, Trump tells Zelenskiy that "I heard you had a prosecutor who was very good and he was shut down and that's really unfair." He said he have Giuliani - "a highly respected man - and Barr call him.

"Biden went around bragging that he stopped the prosecution so if you can look into it. It sounds horrible to me," Trump said.

Zelenskiy assures Trump that his next prosecutor general "will look into the situation."

"I'm sure you will figure it out," Trump tells him, according to the summary.

Zelenskiy then volunteers that the "last time I traveled to the United States, I stayed in New York near Central Park and I stayed at the Trump Tower," one of the president's businesses, according to the summary.

"I also want to ensure you that we will be very serious about the case and will work on the investigation," Zelenskiy added.

Trump never actually asked Barr to contact Ukraine, Justice Department spokeswoman Kerri Kupec said, and Barr has not communicated with Ukraine about a possible investigation or any other subject. Barr, a Trump appointee, first found out about the conversation several weeks after it took place, Kupec said.

The House inquiry could lead to articles of impeachment in the House that could trigger a trial in the Senate on whether to remove Trump from office.

Pelosi said the notes of the call confirm that Trump engaged in behavior that undermines the integrity of U.S. elections, the dignity of presidency and American national security.

"The President has tried to make lawlessness a virtue in America and now is exporting it abroad. ... It is not part of his job to use taxpayer money to shake down other countries for the benefit of his campaign," Pelosi said.

Trump has repeatedly suggested wrongdoing by Biden and his son but has offered no evidence to back up the assertion.

Former White House and national security officials have said any summary released by the administration is not likely to be verbatim or transcribed from a recording. Instead, it is likely to be complied from written notes taken by U.S. officials who listened in on the conversation, they said.

Trump has withstood repeated scandals since taking office in 2017. House Democrats had considered, but never moved ahead with, pursuing articles of impeachment over Trump's actions relating to Russian interference in the 2016 U.S. election aimed at boosting his candidacy.

Under the U.S. Constitution, the House has the power to impeach a president for "high crimes and misdemeanors." No president has ever been removed from office through impeachment. Democrats currently control the House and Trump's fellow Republicans control the Senate.

Trump has defended his actions in the Ukraine matter as appropriate and said he exerted no pressure on Kiev involving U.S. aid. Trump denounced the impeachment move on Wednesday as "the single greatest witch hunt in American history."

Biden, who served as U.S. vice president from 2009 to 2017, is leading a field of other Democrats vying for the party's nomination to face Trump, who is seeking a second four-year term in the November 2020 election. There has been no evidence that Biden used his position as vice president to help his son in this matter.

The United States, European countries and others had pushed for the ouster of the Ukrainian prosecutor investigating the energy company because he was not pursuing it aggressively enough. The prosecutor who replaced him, Yuriy Lutsenko, told Reuters on Friday that no wrongdoing was found on the part of Biden's son in his relationship with the energy firm.

Ukrainian officials have not said publicly that they would open any investigation of Biden or his son.

Many Republicans came to Trump's defense and said the absence of a quid pro quo - a Latin phrase meaning a favor for a favor - in the call showed that the concerns of Democrats were overblown. Senate Majority Leader Mitch McConnell denounced what he called the Democratic "impeachment obsession."

But Republican Senator Mitt Romney told reporters he had read the memo and "it remains troubling in the extreme. It's deeply troubling."

Pelosi would not commit to an impeachment timetable but Judiciary Committee Democrat David Cicilline said articles of impeachment could move to the House floor in a matter of weeks, if the allegations against Trump prove true.

"The president of the United States has already admitted the misconduct, Cicilline said, referring to Trump discussing Biden with the Ukrainian leader.

The United States has been giving military aid to Ukraine since Russia's annexation of Crimea in 2014. The $391.5 million in aid at issue in the current controversy was approved by the U.S. Congress to help Ukraine deal with an insurgency by Russian-backed separatists in the eastern part of the country.

Trump on Sunday acknowledged that he discussed Biden and Biden's son with Zelenskiy. Trump on Monday denied trying to coerce Zelenskiy to launch a corruption investigation into the Bidens in return for the U.S. military aid.

The current controversy arose after a whistleblower from within the U.S. intelligence community brought a complaint with an internal watchdog relating to Trump's conversation with Zelenskiy. Even though federal law calls for such complaints to be disclosed to Congress, the Trump administration has not done so.

The whistleblower was concerned that Trump was pressuring a foreign leader to take an official action that would help his 2020 re-election, according to a legal memo released by the Justice Department's Office of Legal Counsel.

The Inspector General's office found "some indication of an arguable political bias" by the whistleblower in favor of a rival political candidate," but determined that the allegation appeared credible, according to the office.

Barr must recuse himself from any Ukraine-related investigations in light of the contents of the call, Jerrold Nadler, the House Judiciary Committee chairman, said.

The Justice Department concluded that the whistleblower complaint did not need to be shared with Congress because the relevant law only covers conduct by intelligence officials, not the president, according to a legal analysis released by the department's Office of Legal Counsel.

U.S. intelligence agencies and a special counsel named by the Justice Department previously concluded that Russia boosted Trump's 2016 presidential election bid with a campaign of hacking and propaganda aimed at harming his Democratic opponent Hillary Clinton.

This article originally ran on curated.tncontentexchange.com.