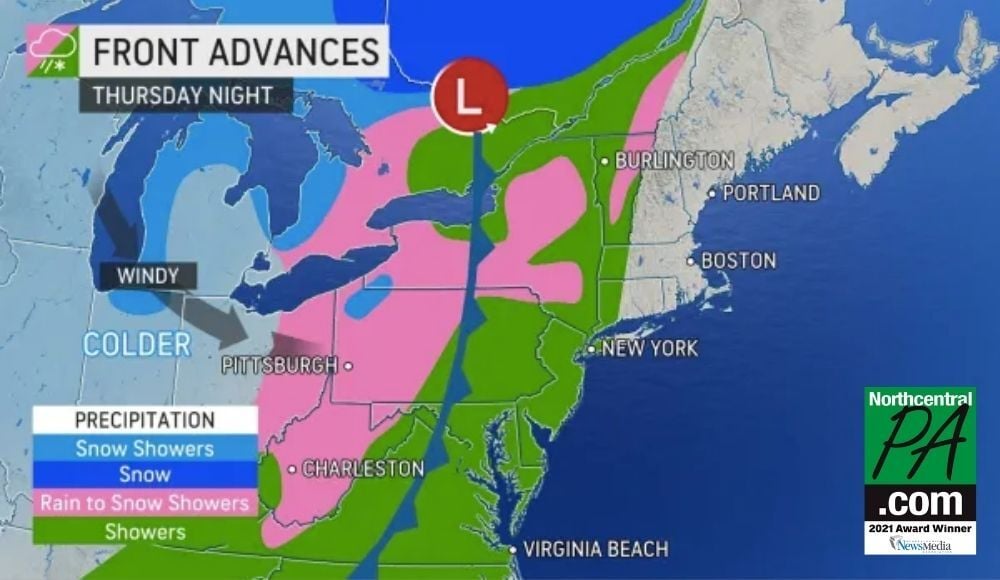 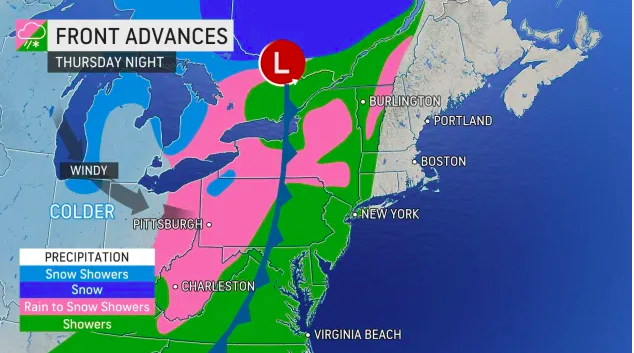 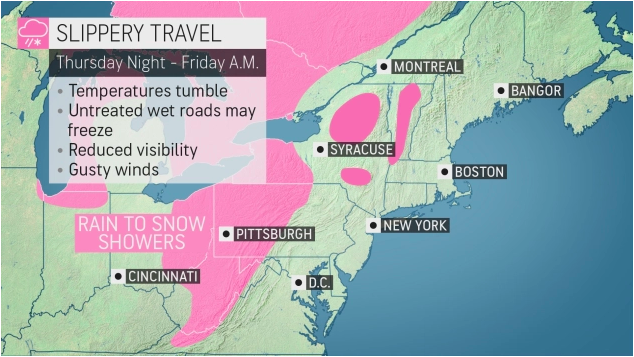 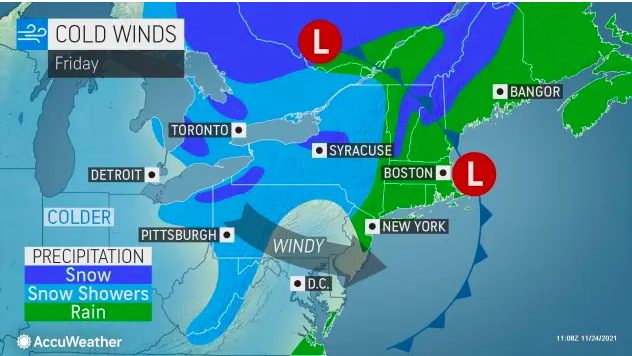 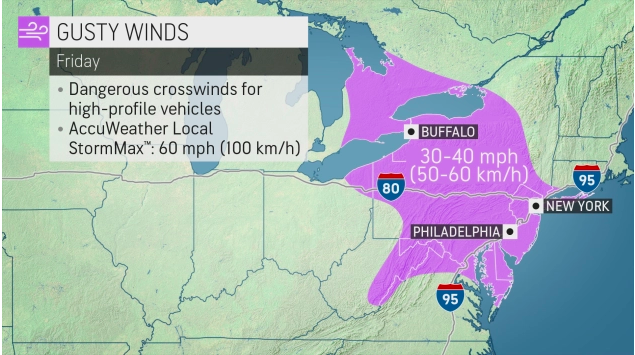 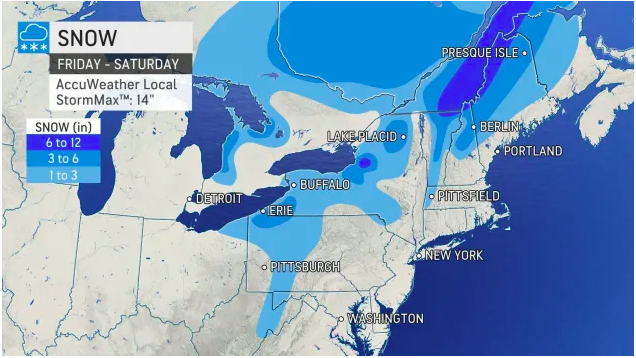 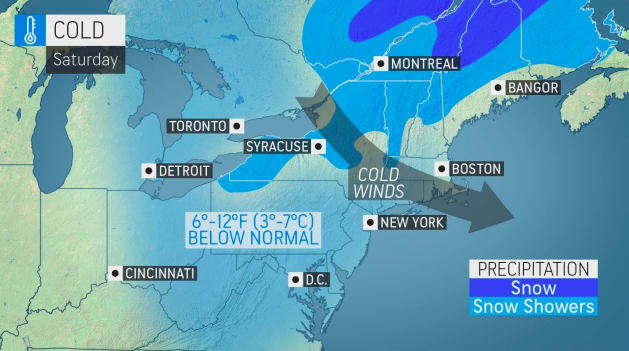 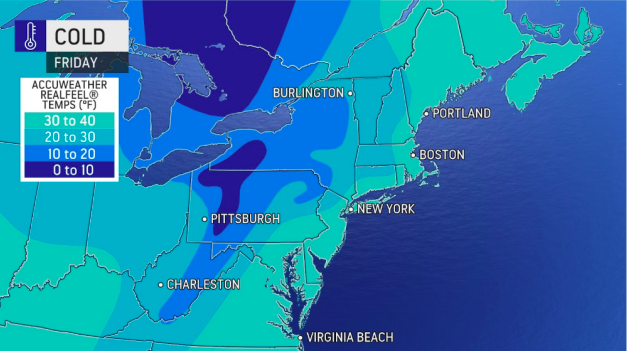 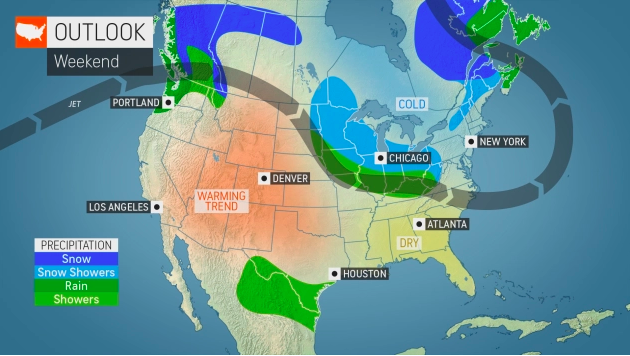 A mild Thanksgiving Day across the Midwest and Northeast will be followed by sharply colder air and the potential for another round of lake-effect snow that could trigger risky and even dangerous travel from the Great Lakes to the central and northern Appalachians. Even in places where roads are free of snow accumulation but wet, a rapid freeze-up could create hazardous conditions for motorists.

The new blast of cold air is likely to bring the lowest temperatures of the season so far across much of the Midwest and Northeast, according to AccuWeather meteorologists. The chilly air may be enough to trigger weather whiplash, as it will follow a brief warmup Wednesday in the Midwest and Thanksgiving afternoon in the East. Temperatures will peak well into the 40s and 50s F during the brief warm spell.

However, a blast of wintry air will sweep southeastward from Canada into parts of the Midwest beginning late Thursday and across the East Friday as a cold front shifts eastward. For example, Indianapolis reached the mid 50s Wednesday and will only dip into the 40s Wednesday night. As colder air sweeps in on Thanksgiving Day, temperatures in Indianapolis may hold nearly steady or fall a bit prior to plunging into the low 20s Thursday night.

Even out ahead of the cold front, some unsettled weather could arrive. Rain showers or perhaps a few hours of steady rain will spread from the Great Lakes and Ohio Valley on Thanksgiving Day to the Appalachians Thursday night and the Interstate 95 corridor of the Northeast Friday. Gusty winds will occur ahead of the system as well as behind it. The strongest winds, perhaps with gusts to near 50 mph, are likely in the Central states. Gusts this strong can make for tricky handling on the highways and may lead to minor airline delays as well.

As the colder air first arrives Thursday afternoon across Michigan, northern Indiana and western Ohio, a few snow showers will develop, but road surface temperatures may not drop fast enough for widespread slippery travel just yet, according to AccuWeather Senior Meteorologist Adam Douty. But, with the aid of darkness, as the cold air continues to pour in and snow showers become more extensive, these same areas and locations farther to the east are expected to dip below freezing Thursday night, he added.

As the cold air flows over the warm waters of the Great Lakes, the air will pick up moisture and unleash clouds and snow, known as lake-effect. "Dry air from high up in the atmosphere and farther west from the Plains may be drawn in this time as was the case early in the week and may limit the amount and extent of lake-effect snow accumulation," AccuWeather Senior Storm Warning Meteorologist Brian Wimer explained, adding that the air is a bit colder and moister than earlier this week.

The same dry air battle may be enough to allow moisture to evaporate on many roads before freezing up, but that may not be the case everywhere. Motorists traveling long or short distances on the roads should expect conditions to change from one place to another in this situation. Stretches of I-80, I-81 and I-90 and others are notorious for varying weather conditions and multiple vehicle pile-ups, especially in situations where snow showers and heavier snow squalls develop.

"As the cold air takes root, bands of lake-effect snow are likely on Friday from northeastern Ohio to parts of western and northern Pennsylvania and western, central and northern New York state," Douty said, and added that the combination of gusty winds and colder air can lead to several inches of snow, areas of blowing and drifting snow and poor travel conditions.

In parts of the mid-Atlantic and southeastern New England, it is possible that some wet snowflakes will mix in with the rain showers late Friday. A couple of snow showers could also roll through these areas Friday night. However, lake-effect rarely reaches all the way to the Atlantic coast, and the advance of dry air may prevent such an occurrence this time as well.

Except in the higher terrain, such as the Poconos, Catskills and Berkshires, any accumulation or icy condition on roads is highly unlikely. Motorists venturing over the mountains should keep alert for changing weather conditions due to isolated snow showers Friday evening.

"Compared to Thursday across the central Appalachians, mid-Atlantic and New England, Friday will feel like the region jumped straight into the winter season, regardless of the scope of lake-effect and any snow shower activity," Douty said.

The period from Friday to Saturday in the Northeast is likely to be quite blustery and cold. AccuWeather RealFeel® Temperatures in the teens and 20s will be common across the interior and the lower 30s along the coast. Holiday shoppers will want to bundle up.

Temperatures may moderate slightly over the weekend but likely not to the extent of prior warmups. There is even the potential for a storm from western Canada to drop across the northern Plains and Midwest later this weekend and into the Northeastern states by early next week. Storms that originate from this region are known as Alberta clippers and when the air is cold enough and enough moisture is available, they can produce a swath of accumulating snow.

AccuWeather forecasters are already keeping a close eye on the potential for a major storm that could affect the Central and Eastern states later next week. The system could mark an end to the lull in far-reaching stormy conditions of late, AccuWeather Senior On-Air Meteorologist Mark Mancuso said.