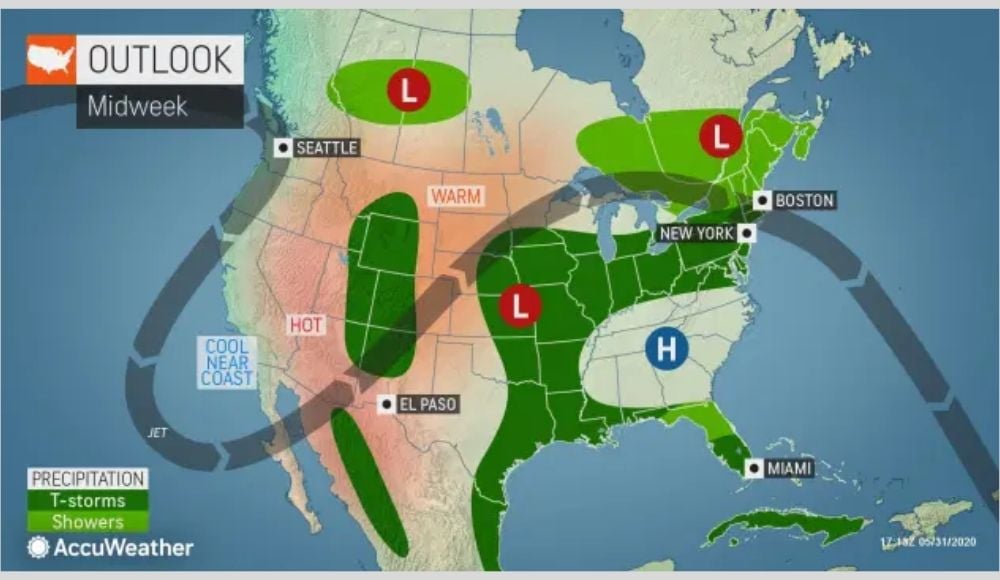 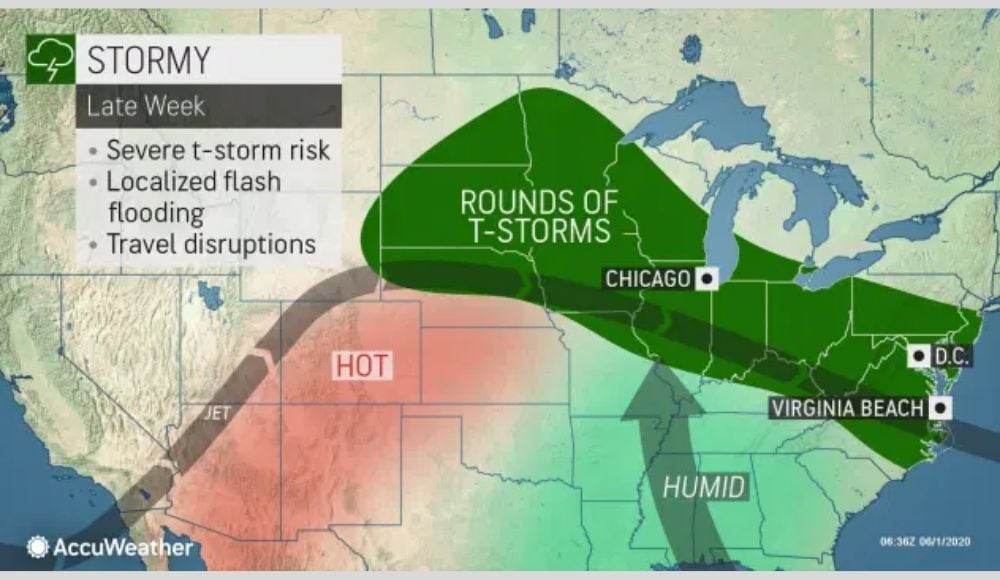 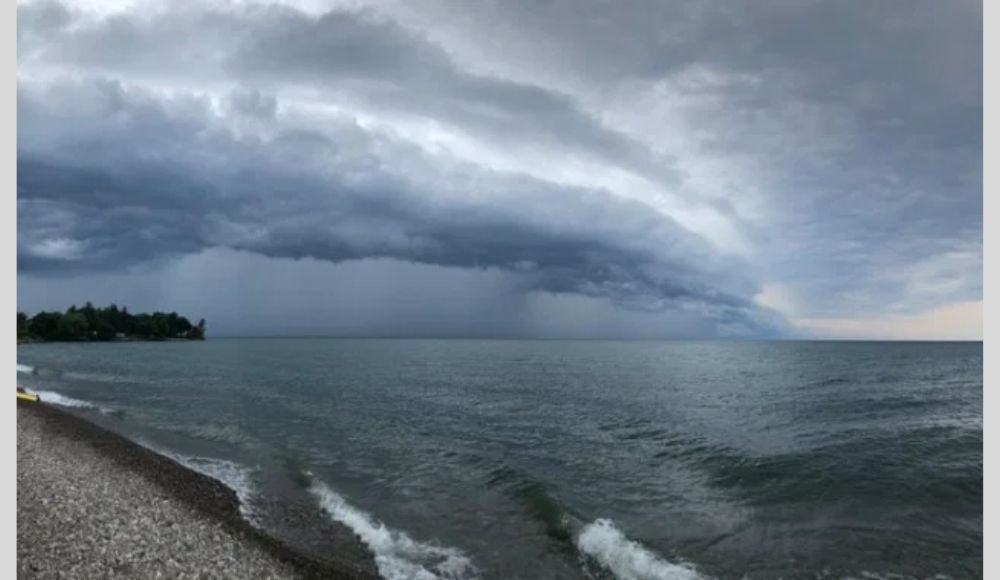 A severe thunderstorm with a 'shelf cloud' moving into Oswego, New York, on Thursday, Aug. 8, 2019. Derechos are often marked by a shelf cloud along the leading edge. Photo by twitter user @RobertBiancoWx 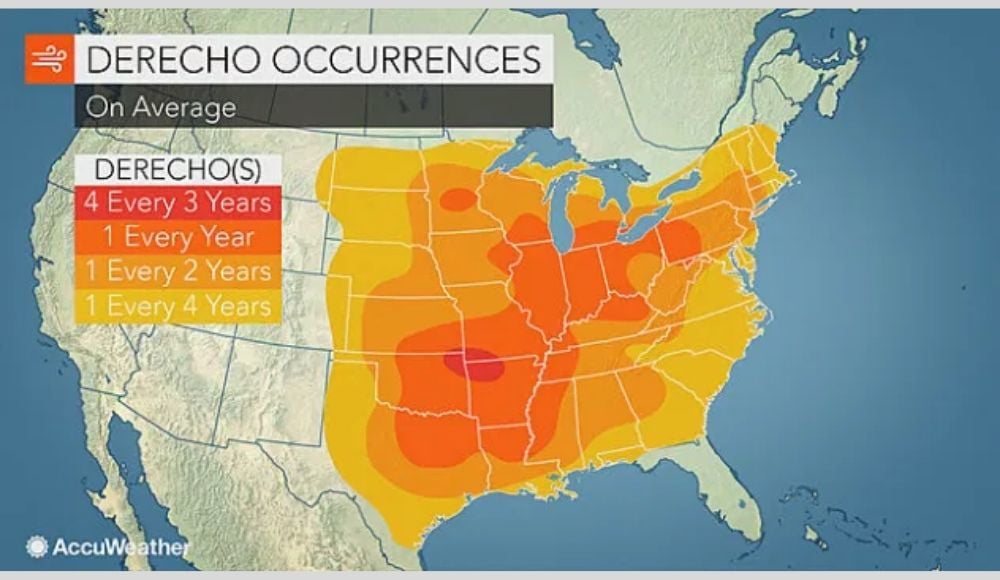 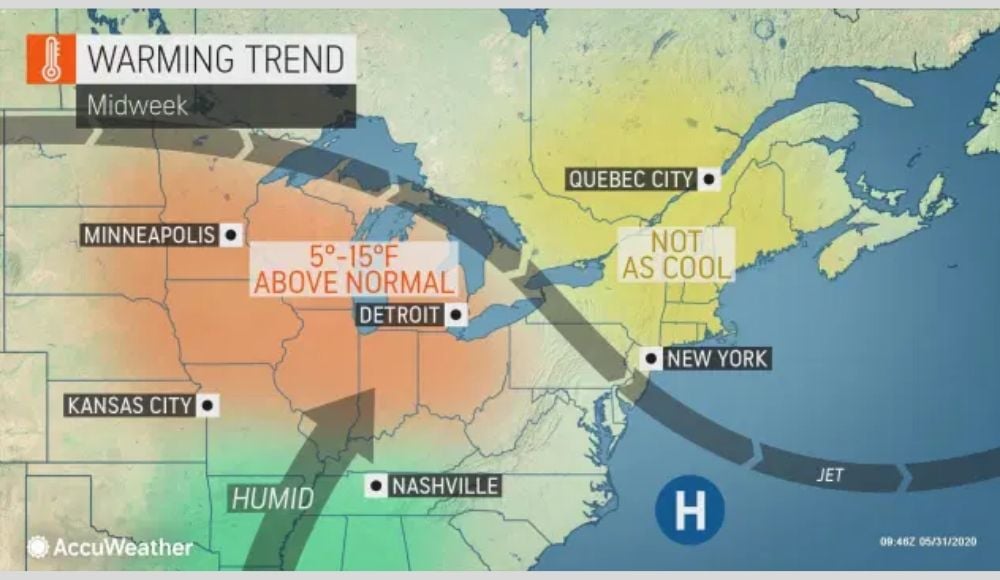 A swath of stormy weather will trace the periphery of a heat wave in parts of the U.S. this week. Residents all the way from the northern Plains to the mid-Atlantic and perhaps even the Northeast will have to be on the lookout for the unsettled weather.

"A ridge, or 'dome,' of high pressure will set up across the south-central U.S. this week. Underneath the 'dome' hot and sticky, but otherwise relatively tranquil weather will prevail," explained AccuWeather Meteorologist Nicole LoBiondo.

"However, near the edges of the ridge, where it's still quite warm and humid, but the influence of high pressure isn't as strong, numerous showers and thunderstorms often develop. Because of this, areas near the edge of the 'heat dome' are said to be in the 'ring of fire.'"

During Monday night, heavy, gusty and isolated severe storms can affect some communities from Montana to northern Wisconsin.

By Tuesday, showers and thunderstorms are forecast to focus from the northern Plains into the western Great Lakes, though they will remain confined to a relatively narrow area.

Regardless, they can still pack a punch for those impacted later Tuesday afternoon into Tuesday night, including around Sioux Falls, South Dakota, and near Des Moines, Iowa, Minneapolis and Chicago. Large hail, downpours and wind gusts to an AccuWeather Local StormMax™ of 80 mph will all be possible.

The 'ring of fire' is expected to become more active as the week progresses. Forecasters say a swath all the way from the Dakotas to North Carolina will see daily bouts of showers and thunderstorms, and that some of them could turn dangerous.

"This pattern is conducive for fast-moving complexes of thunderstorms, which can cause severe weather such as extreme straight-line winds and flash flooding," explained AccuWeather Meteorologist Brett Rossio.

"Sometimes they can even turn into a derecho, a line of severe thunderstorms that bring widespread damaging winds along a path several hundred miles long, sometimes with wind gusts over 100 mph," Rossio said. "These particular derechos are called 'progressive derechos.' They can also last well into the nighttime hours, when people are asleep, adding to the danger they can pose."

Damning report on Pa.’s failure to protect residents from fracking unlikely to result in major reform

Because of the fast-moving nature of these storms, they can catch those outdoors off-guard. With temperatures soaring back to well-above normal, many will be enjoying outdoor activities. Hikers, campers and boaters are often at the greatest risk of being caught without shelter in these storms.

Where storms are strong enough to knock out power, residents could be forced to deal with the building summer heat without fans or air conditioning. Heat is the most deadly weather related threat, according to statistics from the National Weather Service.

One of the most famous and significant events involving derechos is a historic stretch of derechos in July 1995. Four derechos in four days occured from the northern Plains into the Great Lakes and Northeast, killing 14 and injuring nearly 100 more, according the Storm Prediction Center. Many of the casualties were hikers and campers struck by falling trees and limbs. The U.S. Coast Guard responded to hundreds of distress calls across the Great Lakes.

"While derechos still occur across the U.S. every year, the power, severity and huge impact of the derechos of 1995 still serve today as reminder of how dangerous and difficult to predict and warn these summertime threats can be," stated AccuWeather Meteorologist Isaac Longley.

The threat may even continue into the weekend, but will shift its focus farther north and east.

"The heat humidity will continue to expand northeastward during the second half of this week, and by the weekend, the 'ring of fire' may shift farther north into the Great Lakes, Northeast, and southern Canada," LoBiondo said.