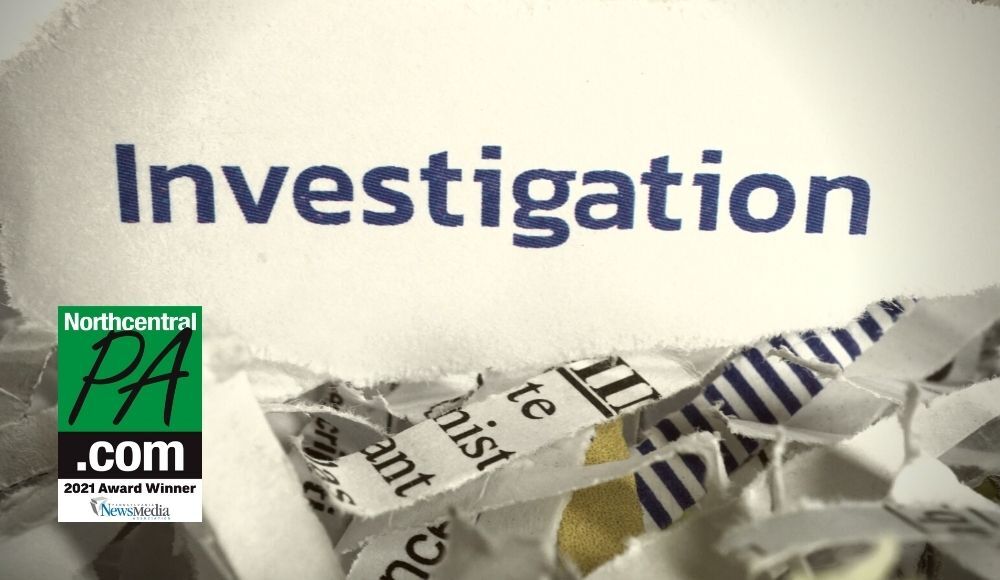 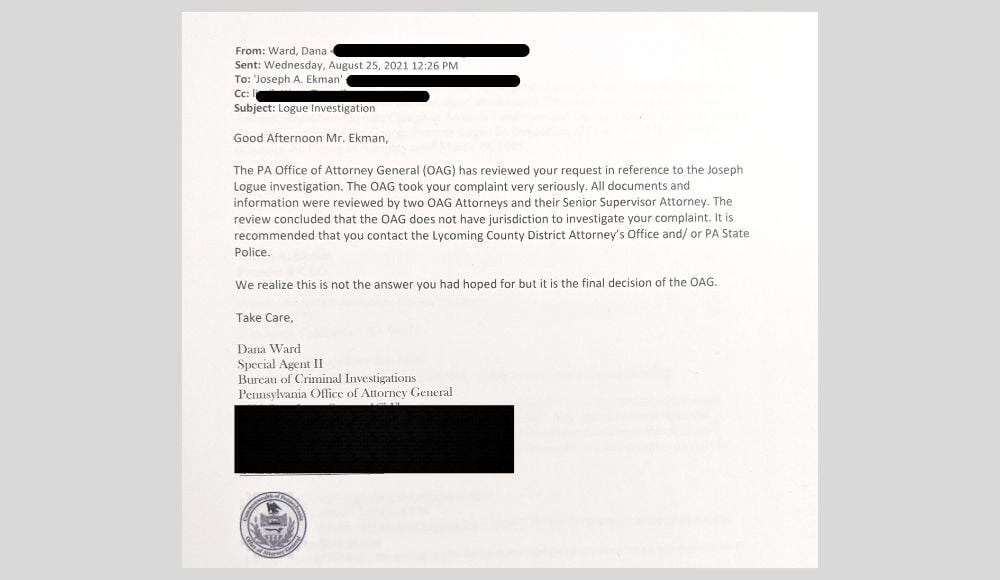 Letter to Mr.  Joseph Ekman from Special Agent II Dana Ward of the OAG dated Wednesday, Aug. 25, 2021. "The OAG does not have jurisdiction to investigate your complaint."

Williamsport, Pa. -- The former wife of a Lycoming County, Pa. businessman who died in May of 2015 is asking for the investigation into his death to be reopened, this time as a homicide.

Lettiere claims fraud against her daughter, unlawful theft and dissemination of files from a personal laptop, and a systematic failure to investigate the circumstances around her husband, Joseph Logue’s, death, which was ruled a suicide.

“We’ve put the dots together,” said Ekman, who relocated to the area for six months to help gather evidence and advocate for Lettiere, his friend and colleague.

The pair started by investigating money Lettiere alleges was illegally taken from her daughter’s inheritance following Logue’s death. Then, they said, evidence grew.

“Navigating the criminal justice system as a private citizen can be daunting and overwhelming,” according to Ekman, who said he and Lettiere have invested their own finances and time to subpoena emails and court transcripts, file Right to Know requests for documents, and hire a lawyer.

The process of opening an investigation

Ekman, Lettiere, and their attorney have contacted the Pennsylvania State Police, Lycoming County DA’s office, and Office of the Attorney General (OAG) in Pennsylvania to share new information they have uncovered; a five-inch thick binder of documents, including emails between some of Logue’s family members and an unlicensed, unregistered private investigator hired to investigate on the family's behalf.

An appointment card from the Office of the District Attorney indicates an appointment was scheduled with DA Ryan Gardner at 9 a.m., September 22, 2021. According to Ekman, a detective from that office canceled that appointment the day before it was to happen.

Gardner told NorthcentralPa.com that he did not meet with Ekman because his office could not open an investigation into the case. “After the acquisition of additional facts, an investigation has to start within its original jurisdiction,” Gardner said, meaning PSP would have to make the determination whether or not they would reopen the investigation.

If they did, the DA’s office would be able to examine the new evidence and either investigate, or refer the case if a conflict of interest is found.

A case review by Pa. Attorney General Josh Shapiro can occur if the DA finds there to be a “real or apparent” conflict of interest, wrote Gary Harki of Spotlight PA in a recent investigative article about the police killing of a teenager in Stroudsburg, Pa.

That family asked the AG to reopen the investigation of their son’s death, killed by a police officer last December, but their request has been denied.

“It’s nearly impossible for the AG’s office to get involved on its own,” Harki wrote.

Ekman and Lettiere found the same to be true in their case.

In a letter to Ekman dated Aug. 25, 2021, Special Agent II Dana Ward of the Attorney General’s Office said the OAG did review their documents. “All documents and information were reviewed by two OAG Attorneys and their Senior Supervisor Attorney,” wrote Ward. “The review concluded that the OAG does not have jurisdiction to investigate your complaint. It is recommended that you contact the Lycoming County District Attorney’s Office and/or PA State Police.”

Ekman said a second appointment with Lieutenant Steven Masteller with Pennsylvania State Police is scheduled for the first week of December, “but it took from August until now to get this second meeting,” said Ekman. “The process is slow.”

The building blocks to alleged homicide

The early stages of Ekman and Lettiere’s investigation began in 2020 upon news of the arrests of Amanda Fenderson, 34, of Montoursville, and former state trooper Johnathan Buynak, 36, of Hughesville. In January of that year, the two were charged with stealing from a family where Fenderson worked as a caregiver. Buynak “investigated” the report.

The names and details from that news story were eerily familiar, said Lettiere.

That’s because in January 2015, Lettiere reported her laptop missing to Pennsylvania State Police in Montoursville, the same time Fenderson was working in her home as a caregiver to Logue. Lettiere filed a police report with Trooper Johnathan Buynak.

The January 2020 arrest of Fenderson occurred while she was working in a home in Wolf Township. Fenderson was accused of stealing personal items, forging a check, and using the family’s debit card to withdraw money without permission.

Trooper Buynak acted as lead investigator, according to police documents. He did not disclose his conflict of interest--that he already knew Fenderson. He had taken Lettiere’s report of the laptop theft from her home where Fenderson worked, and he admitted in a sworn affidavit that he had met Fenderson in a bar before taking the Wolf Township call.

In this case, Buynak again did not follow up on the investigation.

In the end, Buynak pleaded no contest to corruption and conspiracy charges and was terminated as a state police trooper, according to a report by PennLive. He is currently serving probation.

“All of those things were the building blocks for our investigation into what happened to the computer after it went missing, and what we believe happened to Joe Logue,” Ekman said. Lettiere did eventually get the computer back--with a damaged hard drive--from estranged family members via an attorney.

“If DA Gardner took one look at our evidence, we believe he’d have no choice but to refer the case to the OAG,” Ekman said. The reason: conflict of interest between local law enforcement and the Lycoming County judicial system.

How do judges avoid conflict of interest?

Judges who feel they may face a conflict of interest recuse themselves by taking no part in deciding cases that they would otherwise help decide, according to Cornell Law.

“The Due Process clauses of the United States Constitution requires judges to recuse themselves from cases in two situations,” the Cornell Law website said. “Where the judge has a financial interest in the case's outcome, or where there is otherwise a strong possibility that the judge's decision will be biased.”

In a letter to Gardner on October 27, Ekman wrote, “There are many conflicts of interest between your office, your Chief Detective Mike Simpler, Lycoming County Court, and the Pennsylvania State Police. Some of the players may be your friends/colleagues.”

The conflicts he cites include records of contributions in the thousands of dollars to political campaigns; clearly documented examples of nepotism within the Lycoming County court system; and evidence of local judges and litigators fraternizing via committee memberships.

Gardner said he believes Ekman is “fashioning this as a conspiracy theory.”

However, ‘conflict of interests,’ are defined as a situation in which the concerns or aims of two different parties are incompatible, or in which a person is in a position to derive personal benefit from actions or decisions made in their official capacity. This is not unusual in smaller towns, where lawyers practice locally, then get elected to serve in a judicial capacity.

“On the general issue of conflicts of interest, in all communities, but especially in a small community such as Lycoming County, it’s important that the DA refers cases to the OAG when there’s a perceived conflict,” said Lycoming County Commissioner Rick Mirabito. “DA Gardner has a good history of doing this.”

Their evidence has yet to be reviewed by any law enforcement, which Ekman and Lettiere hope will change after they meet with Pennsylvania State Police for a second time in December.

In the meantime, they’ve turned their attention to the Federal government.

“We’re looking beyond Lycoming County, and even the state of Pennsylvania,” Ekman said. “We’ve sent letters to the FBI and the U.S. Justice Department asking for a new, independent investigation.”