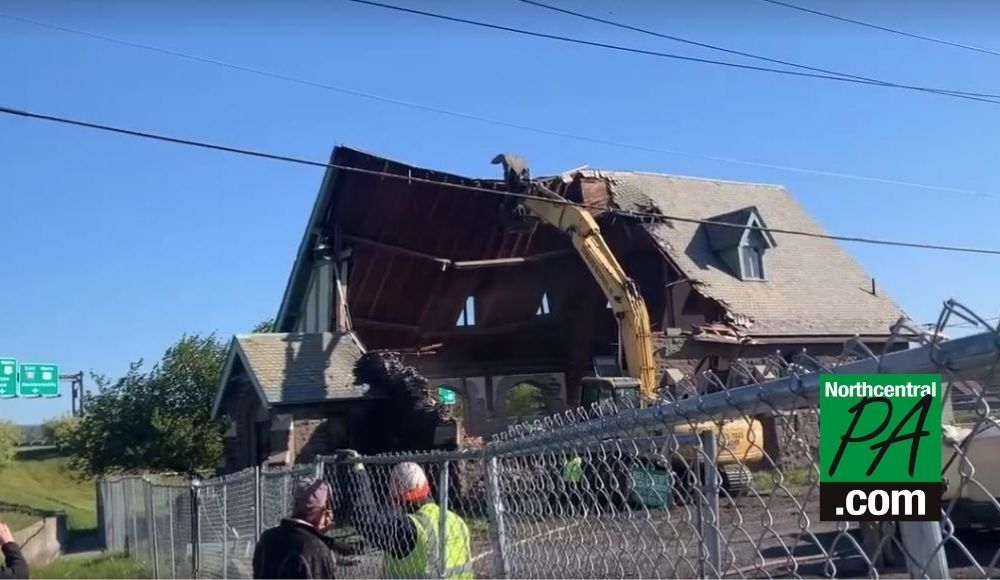 Work crews use heavy machinery to bring down the former St. John's Church which occupied the space since 1908. 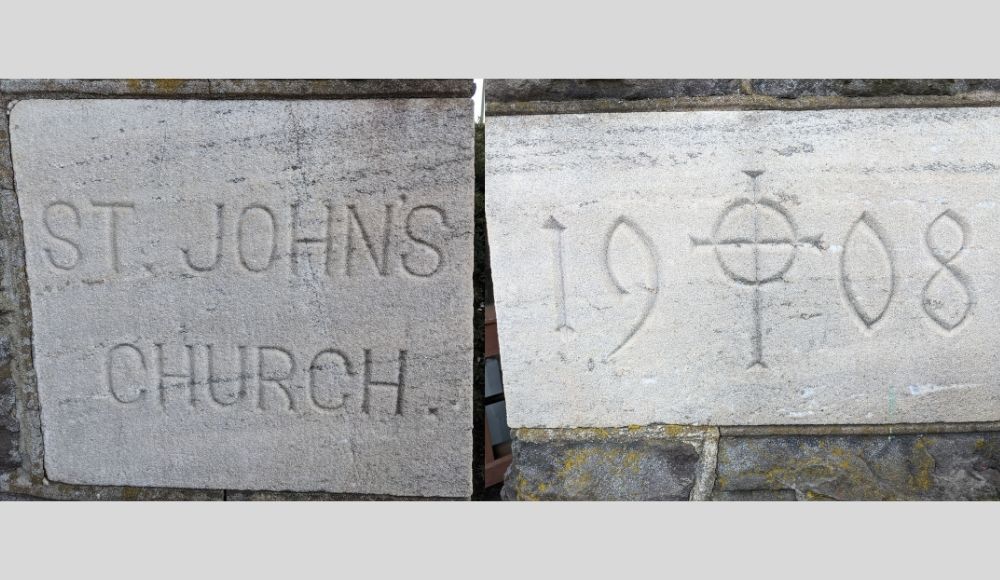 The historic cornerstone that was located on the front left corner of the church, noting 1908.

South Williamsport, Pa. -- For 113 years, this church has stood at the foot of the Market Street Bridge in South Williamsport. It didn't have an imposing spire or looming presence along the riverfront. It was unassuming and beautiful in its simplicity.

As the borough grew up around it, the church became wedged between the northbound and southbound lanes of Rt. 15.

It has been the site of worship for the Seventh-day Adventists for 66 years, but anyone driving by on Rt. 15 northbound or southbound can see the changes coming.

Heavy equipment is taking the church down to make room for a new building: a new location for Muncy Bank and Trust.

It’s progress, not without homage to the past.

Without room to expand, and with a buliding that parishoners said was too cold in the winter, and too hot in the summer, forcing them into the basement during low and high temperature swings; with no kitchen to prepare meals, few classrooms, and no suitable meeting spaces, it became time to make a decision.

Pastor Roy Wheeden came to the area a year and half ago to serve as Pastor for the Mountain View Christian School, and  the Milton, Lock Haven, and Williamsport Seventh-day Adventist churches. There was discussion even before his arrival, he said, about selling the South Williamsport church and using land available at their Mountain View Christian School site just a few blocks east.

But it’s a difficult thing, to sell a piece of history, a sentimental home for the worshippers who called the church home for 66 years.

NorthcentralPa.com spent time with Pastor Wheeden and Muncy Bank and Trust President and CEO Robert Glunk in February of 2021 to talk about the church, and the plans going forward.

The church was a gift of G. Bedell Moore who came to Williamsport from New Jersey when he was 17. Moore gave the church to the community in memory of his father, Rev. Richard Channing Moore, who, according to The Living Church, an Episcopalian newsletter, was the son of the first Bishop of Virginia, and was the Rector of Christ Church

G. Bedell Moore and his business partner Henry Lutcher made their fortune in timber in the Williamsport area in the mid 1800s before moving west to Texas. The congregation, which The Living Church newsletter said had been worshipping in a “small frame building in a very undesirable location for the 25 years of the mission’s history,” appealed to Moore--reportedly a generous philanthropist, according to the online archives of the Texas State Historical Association--to build the church.

Inside the church was a watercolor of stained glass in Tudor Gothic triple windows, an open timbered roof, and detailed carved wood buttresses. Above the altar, a chancel window made of antique glass that cost $2,000 in the early 1900s, designed by D’Ascenzo Studios in Philadelphia, depicts six different scenes or events of St. John’s life. The window was given in memory of G. Bedell Moore, by his sisters. Moore died midway through the construction of the church.

Focused on preservation and future

These relics won’t be gone for good, said Wheeden and Muncy Bank and Trust president and CEO, Robert Glunk.

When the plans first started coming together, Glunk and the architects asked, "Is there a way that we can work with the current structure there?" Unfortunately it was ust not functional, he said.

The bank and the Seventh-day Adventist church leader have worked closely with the Lycoming County Historical Society to save relics, inculding the cornerstone which dates the structure: 1908.

Once the site is ready, Muncy Bank and Trust will build a new structure on a piece of land that includes the entire parcel where the church and a few other buildings stood.

A new sign welcoming travelers to South Williamsport will replace the old sign, using elements from the historic church.

"There is so much heartfelt attachment to this structure," said Pastor Wheeden. "The building is going away, but that doesn't mean this is going to be an end. It's a continuance of the mission we've been doing for 140 years here in Williamsport."

PSP Selinsgrove looking for driver who fled, ran away on foot