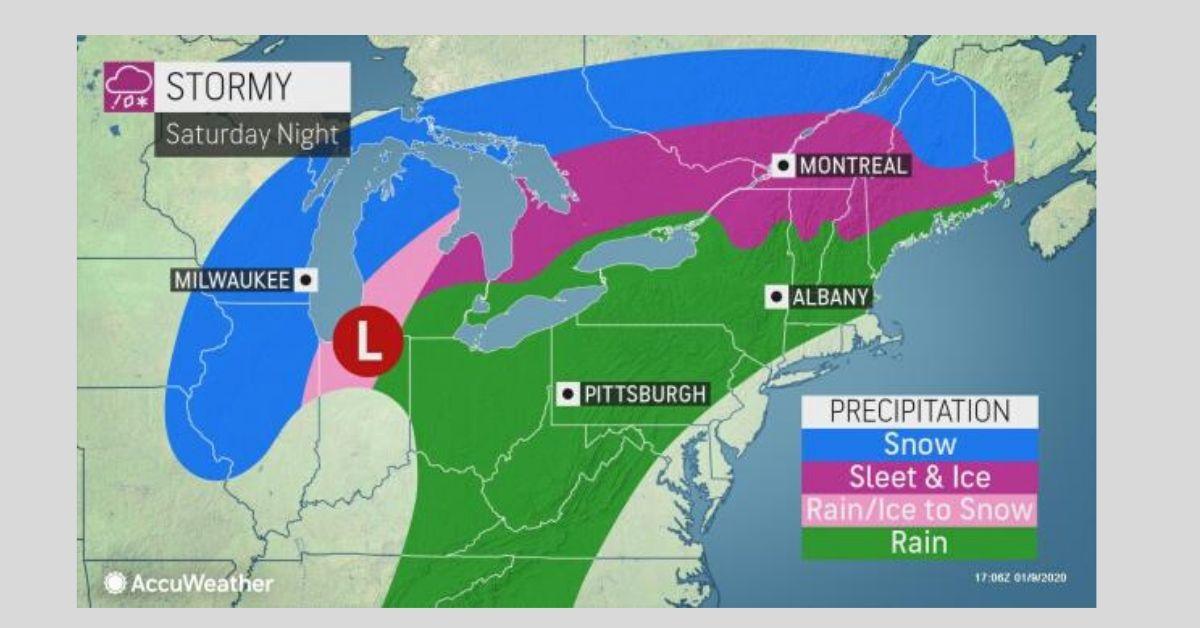 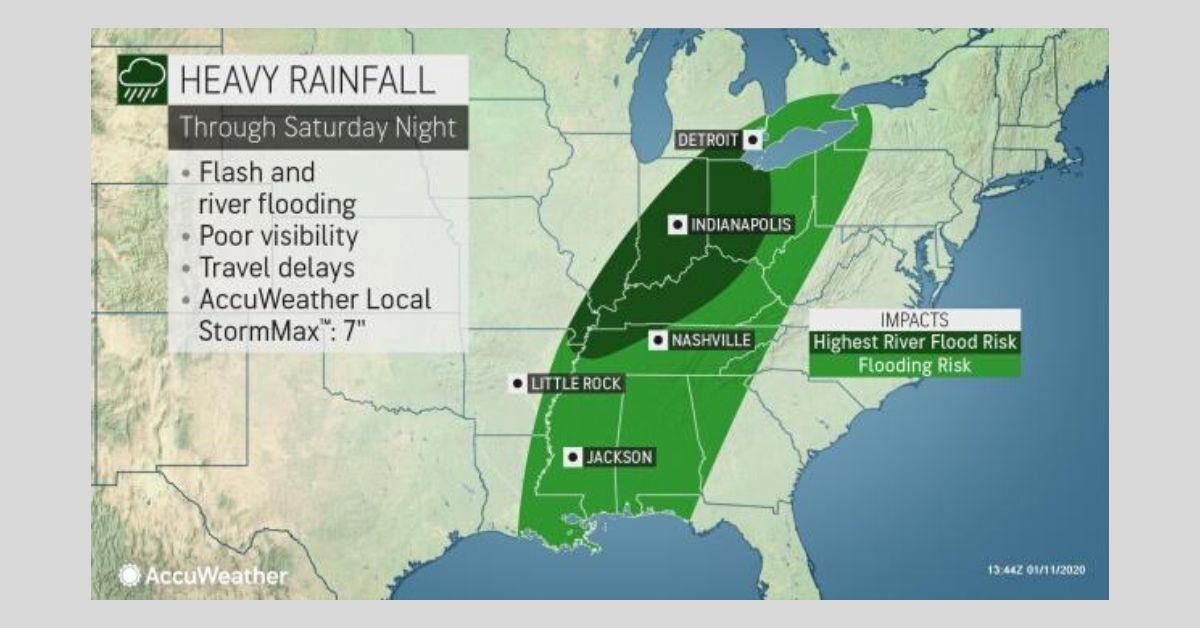 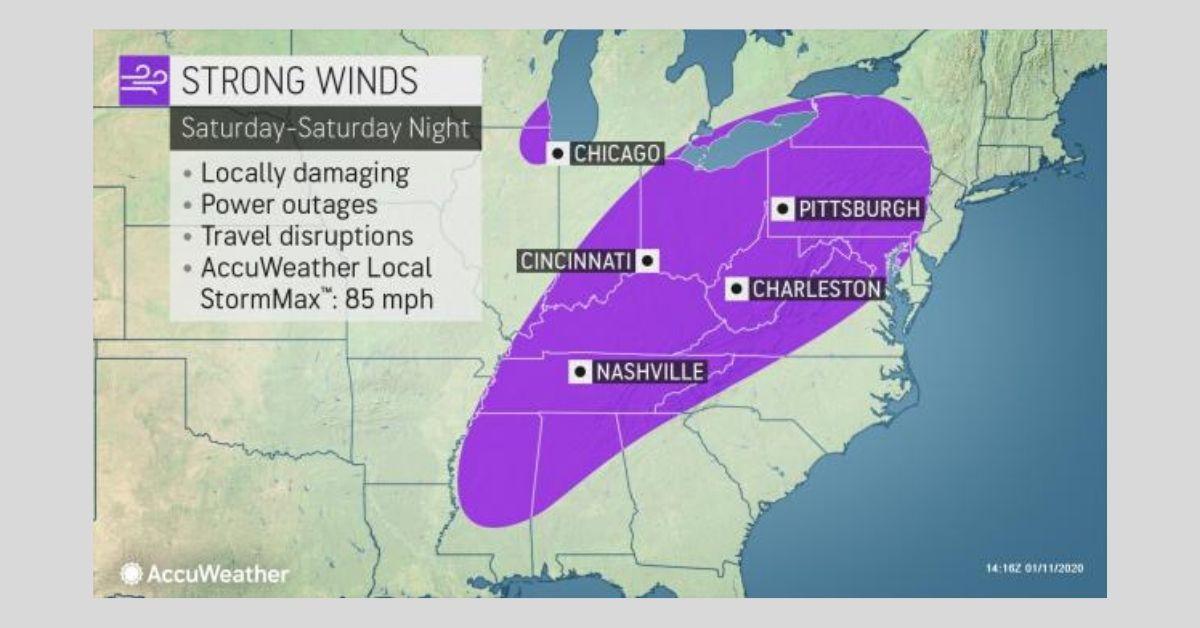 A far-reaching storm will impact much of the eastern two-thirds of the nation with an array of impacts ranging from record warmth ahead of the storm, a severe weather outbreak, a treacherous mix of snow and ice and a wind-driven rain that will drench the Midwest into portions of the Northeast this weekend.

The storm, which developed over southern Plains on Friday, is spreading northeastward through the weekend. The storm continues to draw copious amounts of moisture from the Gulf of Mexico and deposited in the form of heavy rain.

"The core of the heaviest rain on Saturday and Saturday night will be from northern Mississippi to western Ohio and southern Michigan," said AccuWeather Meteorologist Courtney Travis.

Outside of this area, rounds of heavy rainfall are anticipated from the Gulf Coasts of Louisiana and the Florida panhandle into western Pennsylvania and New York.

A general 2-4 inches of rain with an AccuWeather Local StormMax™ of 5 inches is anticipated from northeastern Texas to southern Michigan and northern Ohio.

The amount of rain will also have secondary rivers on the rise over the region. Some rivers in Indiana, Illinois and the Lower Peninsula of Michigan can reach major flood stage.

Motorists should expect hazardous conditions on the highways in the heavy rain zone due to low visibility, excess water on the roads and increased stopping distance.

Some rain will still fall on swollen secondary rivers over the South and could prolong the minor to moderate flooding that has been ongoing over the past week. In some cases, a secondary rise can occur on the rivers and bayous in Mississippi, Louisiana, Alabama and Tennessee.

On Sunday, the rain will push to the Atlantic coast from northern Florida to Maine, but for much of this swath, the rain will be in the diminishing stages compared to that of the Mississippi Valley.

The duration of the rain will be brief in nature, but it can still fall locally heavy for a couple of hours over the Piedmont, mid-Atlantic and New England.

Because winds near the surface and higher up in the atmosphere will generally be blowing in the same direction, strong winds from aloft will also be drawn down to ground level with stiff sustained speeds and powerful gusts expected.

While severe thunderstorms, some with tornadoes, have the potential to cause damage in the South, the strong wind gusts within the rain squalls will also have the potential to knock over trees, break large tree limbs and lead to power outages from the Ohio Valley and lower Great Lakes region to the coastal Northeast.

Gusts frequenting 30-50 mph are likely, with AccuWeather Local StormMax™ gusts near 85 mph. The highest gusts can occur in open areas, along the shoreline of waterways, over high bridges and over the summits of mountains as well as through gaps in the mountains.

The risk of trees toppling over will be greater where the ground is not frozen and heavy rain has saturated the soil.

The strong winds could lead to significant airline delays and can create a considerable amount of turbulence for passengers.

Strong winds will also be a concern on the cold side of the storm.

Winds blowing southwestward across the southern part of Lake Michigan can produce travel delays and even lakeshore flooding in the Chicago area. At the very least, large waves, as high as 20 feet, will be generated by the wind and pound the southwestern shoreline of Lake Michigan.

Such delays could continue east as the storm moves, and cascading issues could lead to delays and cancellations all across the country.