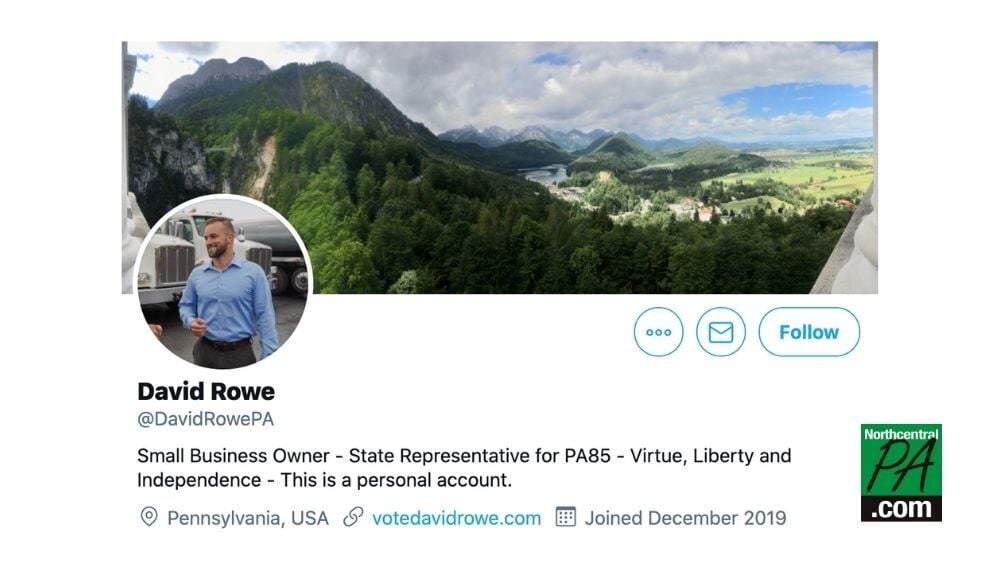 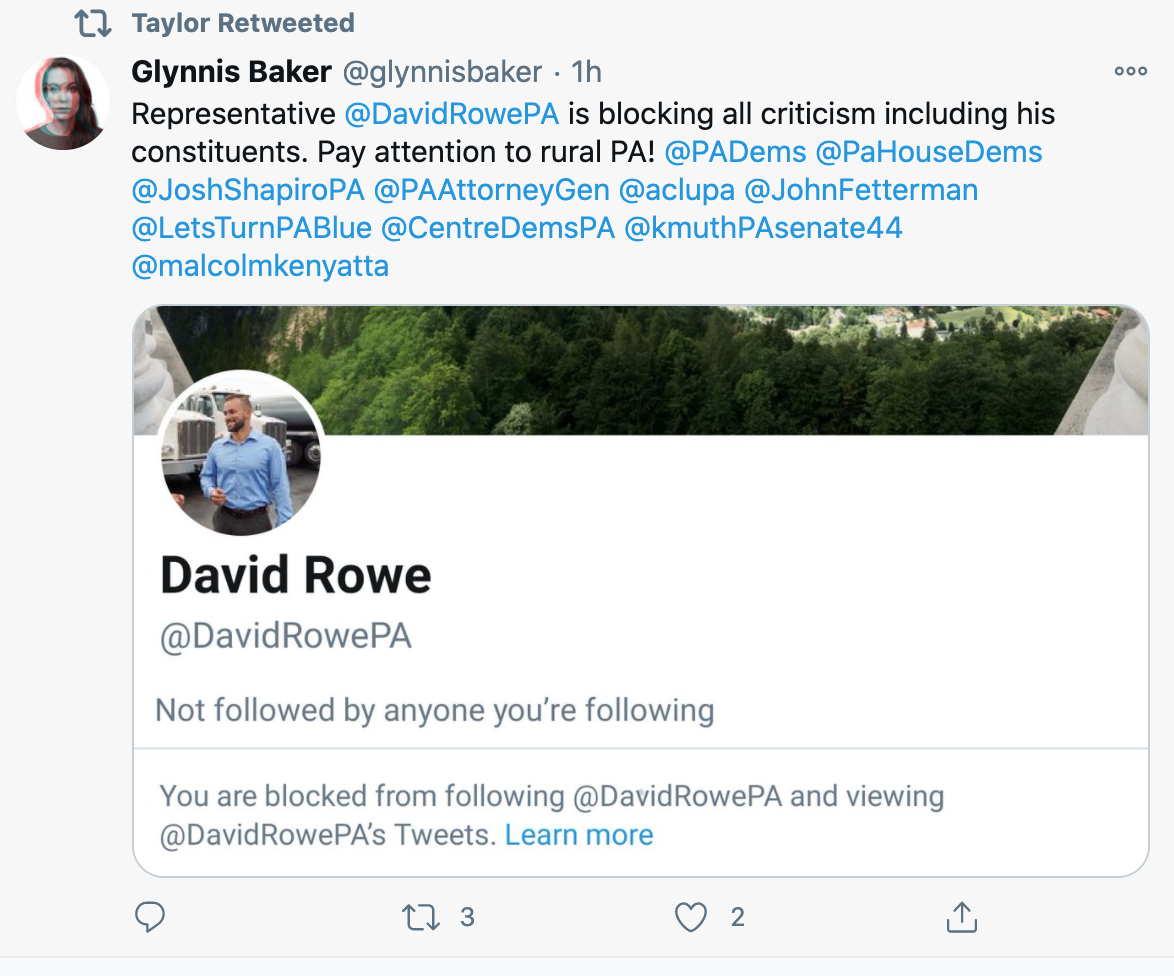 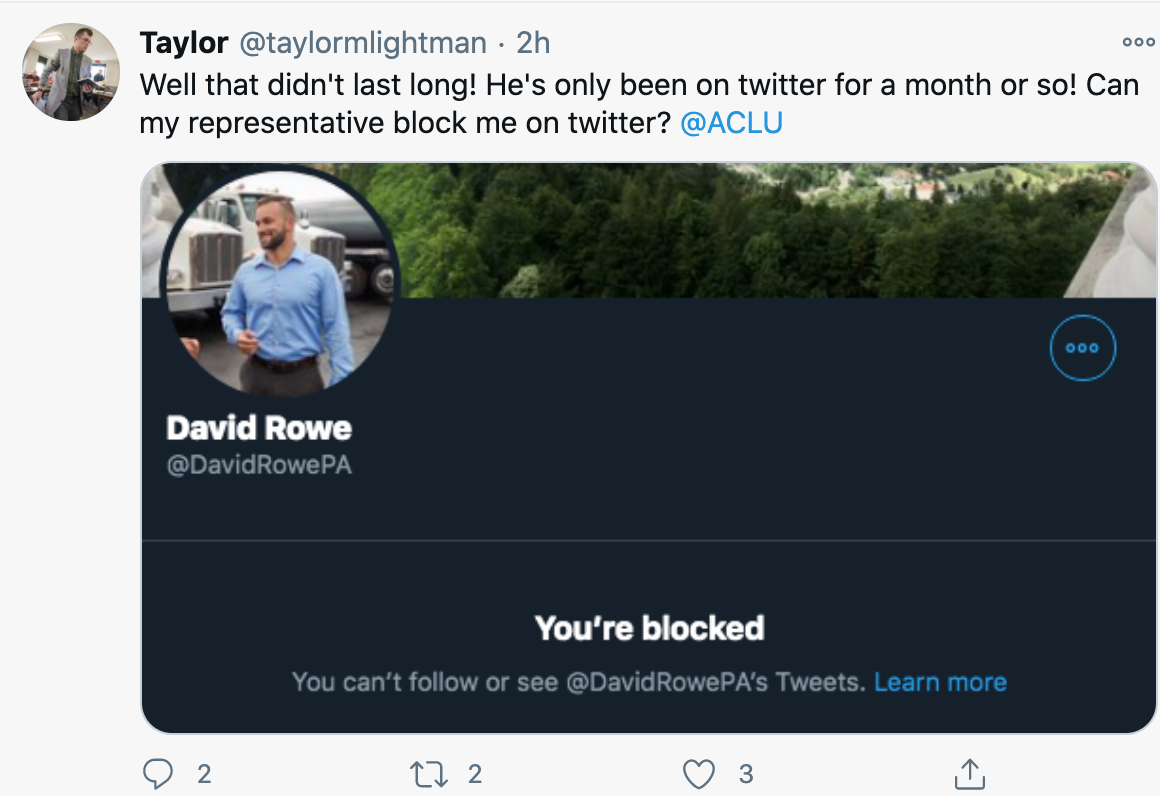 Yesterday, as the U.S. Capitol was stormed by Trump supporters seeking to stop the certification of President-elect Joe Biden Electoral College win, Rep. Rowe posted a tweet regarding the election which drew criticism.

Don’t let today’s events overshadow the fact that @KathyBoockvar admitted Allegheny county violated her guidance regarding mail-in ballots to swing a state Senate race in favor of the Democrat. https://t.co/I8GdWpRXgp

So, is it illegal for public officials to block users on social media? Sometimes.

According to the ACLU, if the social media page "is used by a public official to conduct government business, blocking members of the public from seeing the site or from posting comments may violate the First Amendment" especially if the users are blocked because of the "views they hold or express."

However, "the mere fact that a government official is using a social media site does not mean it is being used for government business or that the First Amendment applies," says the ACLU.

There is a precedent of court decisions which have ruled officials cannot block individuals from their social media accounts, thanks to a ruling against President Trump.

On Jan. 7 2019, The U.S. Fourth Circuit Court of Appeals ruled a that a public official's Facebook Page is a "public forum," and the official is not allowed to block individuals from participating in it because of their views.

According to the court's ruling, as long as a social media page is open to public comment it is a "public forum," regardless of whether or not the page is hosted on a private company–like Twitter or Facebook.

President Trump was subject to the "public forum" rule, when the Second Circuit Court of Appeals ruled the President could not block critics from accessing his account because it constituted a "public forum."

Similarly, New York assemblyman Dov Hikind and Republican congressional candidate Joseph Saladino filed lawsuits against Rep. Alexandria Ocasio-Cortez for blocking them from her Twitter for what she said was "on-going harassment." The Congresswoman settled the lawsuit and apologized for blocking individuals in Nov. 2019.

Rep. Rowe states his Twitter is a "personal account" on his biographical information, which means the "public forum" rule may not necessarily apply. Despite recent court cases, the role and function of social media pages and their use by public officials is a complicated legal issue with no easy answer.

Say thanks to your town supervisors!