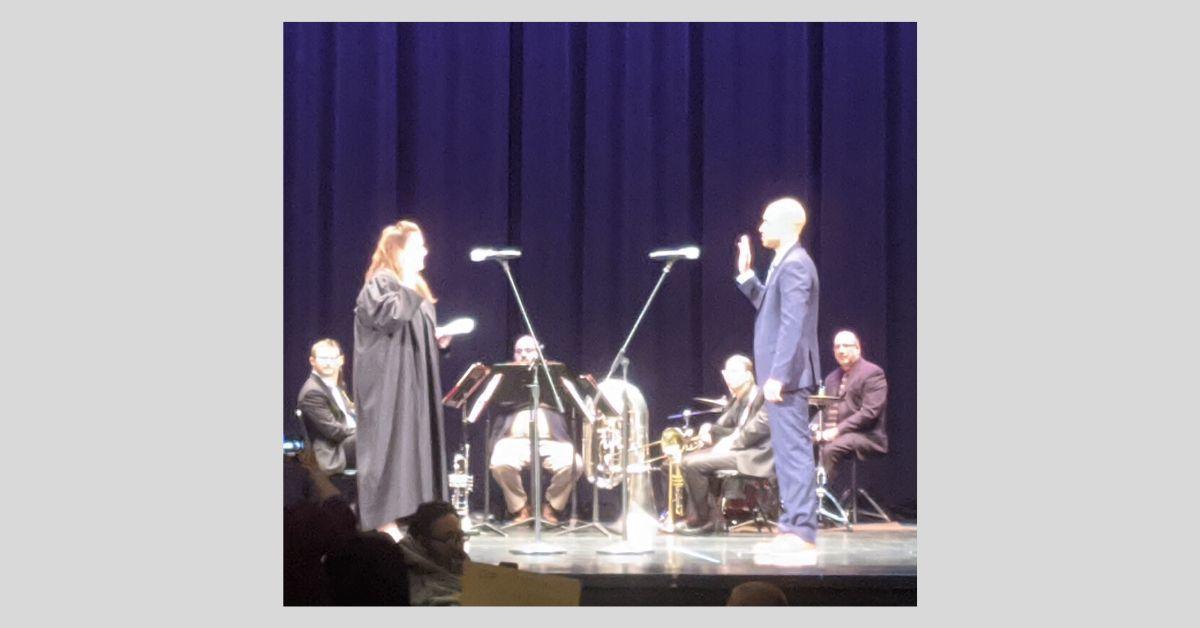 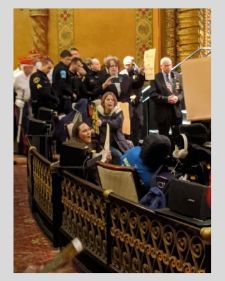 Misty Dion, CEO for the Center for Independent Living (center) at the heart of the demonstration held at Friday's inauguration in Williamsport. 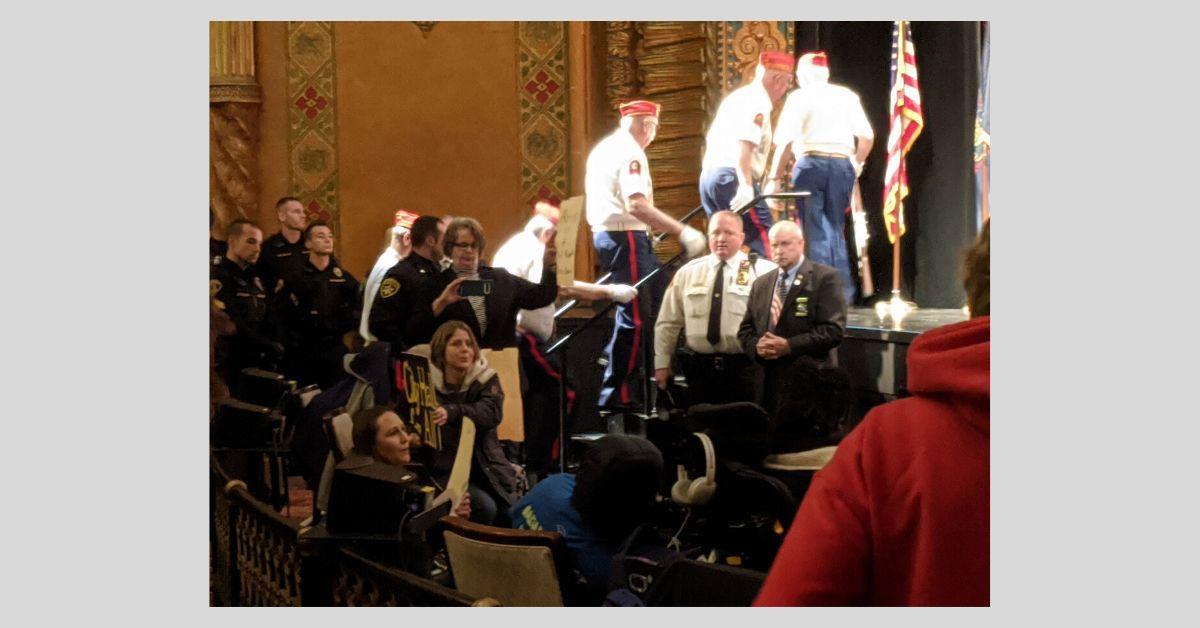 Protesters gathered near the front of the stage to disrupt the ceremony mid-way through the program. Law enforcement circled the group, and the inauguration ended without further incident.

What began as a peaceful and orderly inaugural ceremony on Friday morning in Williamsport to swear in elected and appointed officials turned rowdy as a group of protestors gathered before the stage at the Community Arts Center.

Roughly 30 protesters began chanting “What do we want?” “Access!” “When do we want it?” “Now!” just as Williamsport City Council members took oath. The chanting continued through the remainder of the ceremony, even above the final blessing by Mary Woods and the Color Guard’s retirement of colors.

At the center of today’s protest is a lack of access for people with disabilities, not only to City Hall, but other buildings and amenities in the city and county. “It’s been 30 years (since the Americans with Disabilities Act was passed,) and we’re still talking about the same thing,” said protestor Jerry L. Webb of Williamsport. Webb was with the group, North Central PA ADAPT, who staged the protest.

The ADA is a civil rights law that prohibits discrimination against individuals with disabilities in all public and private areas that are open to the general public, including places of employment, schools, and public transportation.

Why choose the inaugural ceremony to stage the protest, when new members are being sworn in? Why not wait to seek an audience with the new Mayor and City Council members?

“[Mayor Derek Slaughter] has been on City Council, he’s had the power always,” said Webb, pointing out there is no reason that his new appointment would change his ability to hear their message. They think, “it don’t [sic] affect me,” and “they can ignore it.”

Misty Dion, CEO of the Center for Independent Living, Roads to Freedom was at the center of the protest. “It’s my job, as our mission, to help people know their civil rights,” she said. The Center put North Central PA ADAPT members in touch with two civil rights lawyers.

Dion, who has held her position at the Center for Independent Living since 2015, says their goal is to work with the city, but says for two years the group has been ignored by City Council. Dion claims more than $150,000 has been spent on bids for ramps, a security upgrade, and maintenance on the elevator. To have access to City Council meetings, individuals with disabilities must use the rear Police Department entrance to the building. “There are four sets of locked doors to get through,” plus the elevator, she said. In the past, people have gotten stuck trying to exit the building through the four sets of doors.

There are other issues as well, according to Dion. The building has no fire alarms to alert people who are deaf or hard of hearing. Beyond City Hall, the group has tried to raise awareness regarding curbing, right of ways, crosswalks, zoning, and public parks. She says they’ve been ignored.

The future of City Hall has been uncertain for a long time. City Hall’s repair costs have continued to rise and officials acknowledge the building continues to be out of compliance with the ADA.

“In 1979 when we needed new space, they stuffed us in this building that was built in the 1880s and they’ve spent millions of dollars over the past 40 years trying to make us fit in here,” city Police Chief Damon Hagan told On the PULSE in November of 2019.

The issue of allocating taxpayer funds to update a building ony to potentially relocate down the road has been a crutch in moving forward with renovations, but the issue of compliance should not be able to be put off. “If Iived in a neighborhood and the codes department paid me a visit to fix my sidewalks, could I say, ‘well I’m going to wait on fixing this because I might be moving soon?’ No,” said Karen Koch, advocacy coordinator.

As a taxpayer, too, Dion says she finds it “ridiculous” that she should have to get the Federal government involved to protect her basic rights and the rights of others who have disabilities.

In his opening speech, keynote speaker Dr. John Piper, Jr., retired Dean from Lycoming College, asked the audience to stand in reading the Constitution’s Preamble. “The Preamble is the thesis for the constitution,” in which he pointed out the most important part is to “promote the general welfare of the people,” a message which connected with Webb. “I would like to see City Council and the Mayor work together for the general welfare of all people,” he said.

The disturbance certainly caused a reaction from the crowd and prompted additional police presence inside the Community Arts Center. Chief Damon Hagan said he had no prior tip that the demonstration would occur, that the additional officers were in attendance to watch the Mayor and other elected officials be sworn in. After the ceremony he said two would be charged with disorderly conduct but did not name the individuals.

Dion was removed from the Community Arts Center by police and put in a holding cell, but never charged, she said.

Isaac Schriner, an Eagle Scout from Troop 14 in Lycoming County delivered the Pledge of Allegiance for the ceremony. He plans to enlist in the Air Force to help protect American’s rights for this very thing. “Even if I don’t agree with how they went about it, I understand it. This is the right of every citizen,” he said.

Mary Woods, who gave the blessing prayer at the end of the ceremony and had to talk over the protestors’ chanting, said, “It’s hard to get the work done amid interruptions, but interruptions are our work.”

Dion said she does not regret continuing the protest during the prayer and retirement of colors by the Color Guard. “Maybe it was a small inconvenience in your life,” she said, “but you’re talking about people who have been oppressed their whole lives. They’ve never had the opportunity to walk into most places.”

Sorry, there are no recent results for popular articles.

Sorry, there are no recent results for popular images.