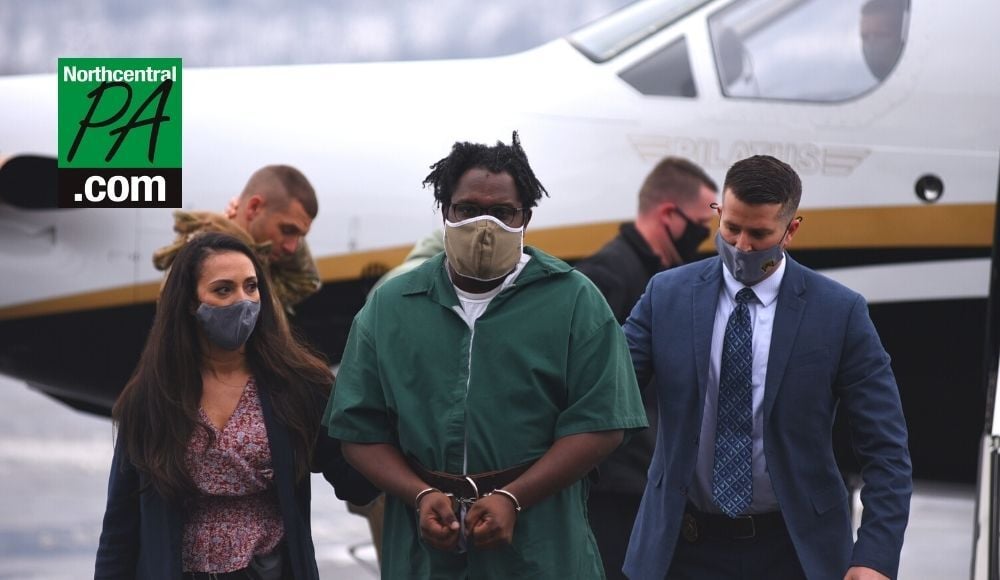 Union County homicide suspect Tracy Rollins is transported from a jet at the Williamsport Regional Airport to a waiting State Police Cruiser. 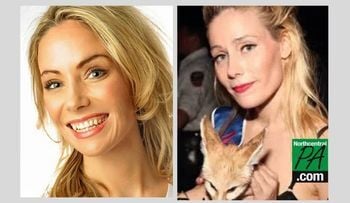 A woman found deceased Sunday along the Mile Run interchange off I-80 East in Union County was identified as Rebecca Landrith, 47, a former model from Virginia.

The return flight arrived around 12:15 p.m., where the suspect was loaded into an awaiting police cruiser and transported to Pennsylvania State Police barracks at Milton.

Rollins was being held at the Hartford Correctional Center in Connecticut on $1 million bail. Now extradited, Rollins faces a felony charge of homicide and a misdemeanor of abuse of a corpse in Union County, where he was denied bail.

Related reading: Homicide suspect to be extradited back to Pennsylvania on Tuesday via Williamsport Regional Airport

Rollins is accused of slaying model Rebecca Landrith, 47, of Virginia, and leaving her body on an I-80 off-ramp near Loganton in western Union County sometime overnight between Feb. 6 and Feb. 7.

Rollins appeared at his preliminary arraignment Tuesday via FaceTime from PSP Milton. He had no questions for the Honorable Judge Jeff Mensch, who presided. Rollins was informed of his charges and rights to a lawyer.

Judge Mensch denied Rollins' bail with the reason listed as "criminal homicide and no ties to the community," according to Union County Court records.

The maximum penalty for criminal homicide ranges from the death penalty to life in prison. In the abuse of a corpse, Rollins is charged with disposing or abandoning the victim's body, which he would face up to an additional 2 years in jail and a $5,000 fine.

The next step in Rollins' case is a preliminary hearing, set for March 5 at 10 a.m. in the Lewisburg courthouse, during which the prosecution will present physical evidence.

Landrith's body was found shortly before 7 a.m. Feb. 7 by a PennDOT worker at mile marker 199 near Mile Run along the off-ramp of Interstate 80 East in West Buffalo Township.

According to an affidavit filed by Trooper Tyler Watson of Pennsylvania State Police at Milton, Landrith, who was a former model, was shot at least 18 times in the head, neck, and chest inside the cab of Rollins' tractor trailer.

Rollins was arrested by state police in Connecticut on February 10 after investigators followed a paper trail to track the suspect down. Through receipts found in Landrith’s jacket, police were able to match dates and times to surveillance footage at several restaurants and convenience stores in Wisconsin and Indiana.

Surveillance footage from those locations showed a man fitting Rollins’ description with Landrith as they traveled through on Feb. 4.

Police also uncovered data from the cell phone number found in Landrith’s pocket after applying for a search warrant granted by Union County President Judge Michael Hudock. The data information matched the locations found on the receipts and surveillance footage from the restaurants and travel plazas where the pair allegedly stopped in their travels.

Reporters Melissa Farenish and Brett Crossley contributed to this article.