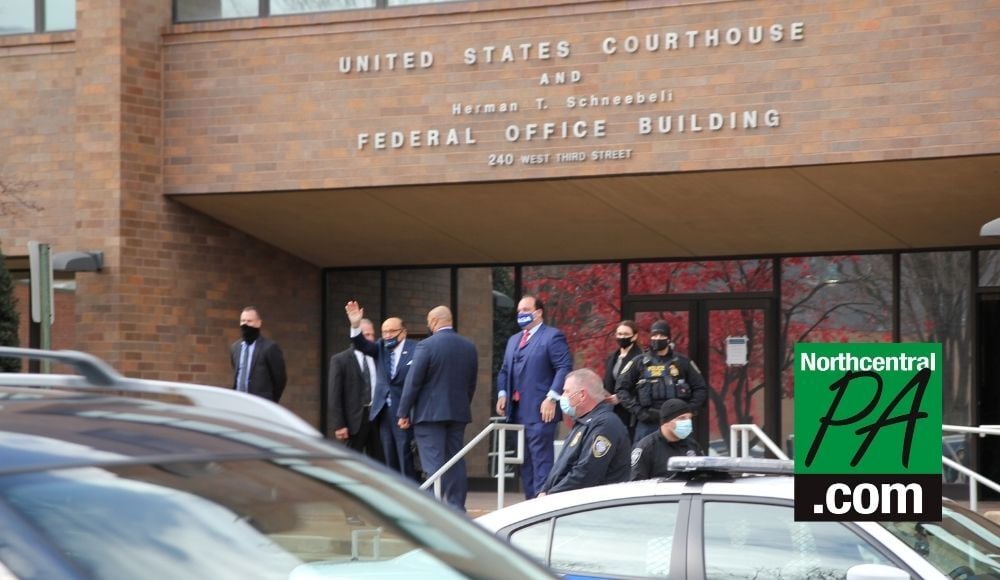 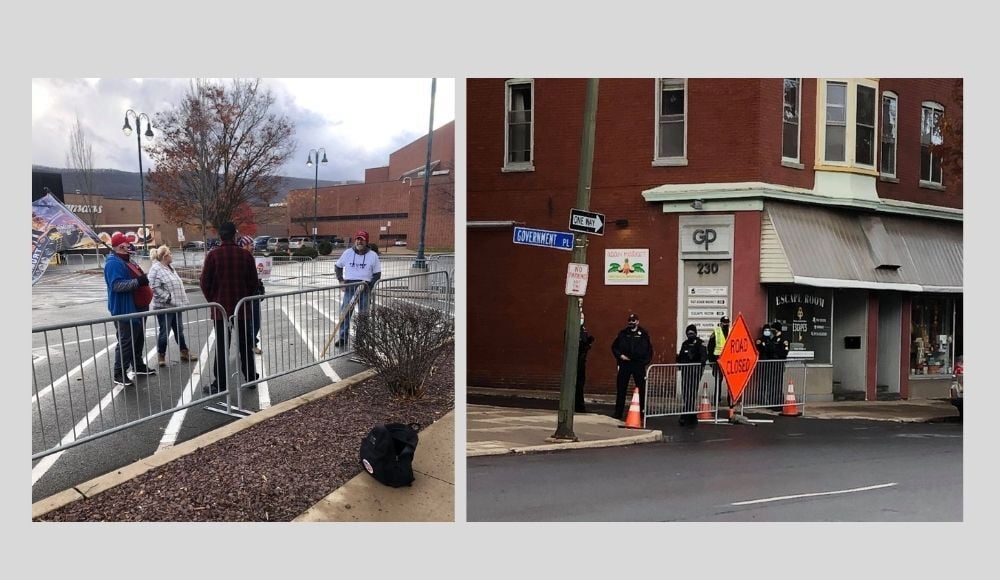 Trump supporters gather across from the Federal Building in Williamsport, while police presence was visible.

Giuliani was joining the Trump team for their last push to hold ballot counts ahead of the November 23rd deadline for the state of Pennsylvania to certify presidential election results.

Though Giuliani has acted as a personal lawyer for President Trump for years, Tuesday was Giuliani’s first appearance in front of a judge for the President.

The Trump team, which lost a total of five lawyers in the four days leading up to the scheduled court hearing in front of U.S. District Judge Matthew Brann, filed an amended complaint as late as Sunday night. The amendments made to the initial case forced the Trump team to ask for a reschedule of Tuesday’s hearing, which was denied.

Giuliani wasted no time in his opening comments to express his complete distrust with the election process. He described the situation as “widespread, nationwide, voter fraud.” He also spent much of his opening statements criticizing democratically run counties, specifically Philadelphia and Allegheny counties.

“It has not been violated in this case, it’s been trashed. It’s been stepped all over, it’s been disregarded here and in some other places in an eerily similar pattern” Giuliani said of the voter process in an unusual 2020 election year. Giuliani also referred to Philadelphia and Allegheny counties as “Democratic Machines.”

Giuliani did submit four exhibits of alleged voter fraud in the form of photos of what he claimed to be Philadelphia and Allegheny counties. The alleged photos showed poll watchers that were supposedly forced to remain behind barriers that the Trump campaign claims was illegal and prevented visible and viable supervision of ballot counting. Giuliani acknowledged that the photographs had only recently come into his possession and added, “if they’re different counties, I’ll correct it then,” indicating he wasn't altogether sure of the source.

Giuliani and his team referenced two plaintiffs named in the suit, from Fayette and Lancaster counties, who alleged the handling of their ballots violated the Equal Protection Clause.

The individual parties based their argument on the claim that because they did not have the opportunity for their ballots to be “cured,” as other were across the Commonwealth, they did not receive equal treatment.

When ballots are filled out incorrectly, such as missing a signature, officials notify voters and allow them to correct the issue and ensure their vote is counted, known as "ballot curing."

Giuliani also claimed the process of ballot curing itself to be illegal.

Daniel Donovan, an attorney for Secretary of State Kathy Boockvar, argued there was no violation of the Equal Protection Clause, because individual counties have their own voting procedures.

A representative for the NAACP also echoed the sentiments of cured ballot being completely legal ballots. “Think about the word ‘cure’” he said. “A ballot that is cured, is fixed. It’s legal. The plaintiffs are complaining that some counties did something that they’re not supposed to in notifying voters that there was a problem. But the votes–the ballots, the cured ballots–is by definition a legal ballot that complies with every applicable requirement cast by a qualified Pennsylvania voter,” he continued.

Judge Brann allowed for arguments from council for upwards of three hours before responding with questions for Giuliani to clarify the stature of the amended complaint.

“You’re alleging that the two individual plaintiffs, Mr. Henry and Mr. Lawrence, were denied the right to vote in violation of the Equal Protection Clause of the 14th Amendment. But at bottom, you’re asking this court to invalidate more than 6.8 million votes, there by disenfranchising every single voter in the Commonwealth. Can you tell me how this result could possibly be justified?” asked Judge Brann.

Giuliani and his team, including GOP lawyer Linda Kearns, seemed to be pushed on their heels during the back-and-forth exchange with Brann about whether the campaign team was alleging fraud as Giuliani remained silent for extended periods of time and tended to flip-flop on whether his team was claiming fraudulent activity as Judge Brann noticed.

“If you’ve acknowledged at the beginning of the hearing that the only issue in the case was the Equal Protection claim related to ballot curing procedure, but you’ve repeatedly spoken now about claims relating to alleged violations of your right to have poll watchers present during the ballot counting process. Your poll watching claims were deleted and they’re now not before this court,” Brann added in reference to the amended lawsuit filed by the Trump campaign on Sunday evening.

Ironically, moments before the initial recess in Tuesday’s federal court hearing, just 87 miles away in Harrisburg, the Pennsylvania Supreme Court ruled 5-2 that the Philadelphia Board of Elections had not violated the Election Code in keeping poll watchers distant from the ballot counting process.

Judge Brann also declined to throw out the Trump legal team's case. This decision gives both parties additional time to file further arguments in writing in the coming days leading up to the court's expected decision on the case.

Homeless in Winter: Area organization takes action to help those in need this season