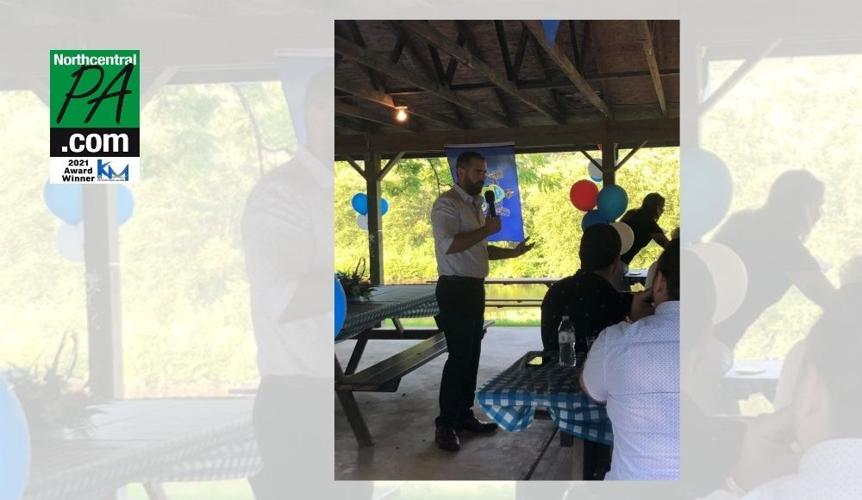 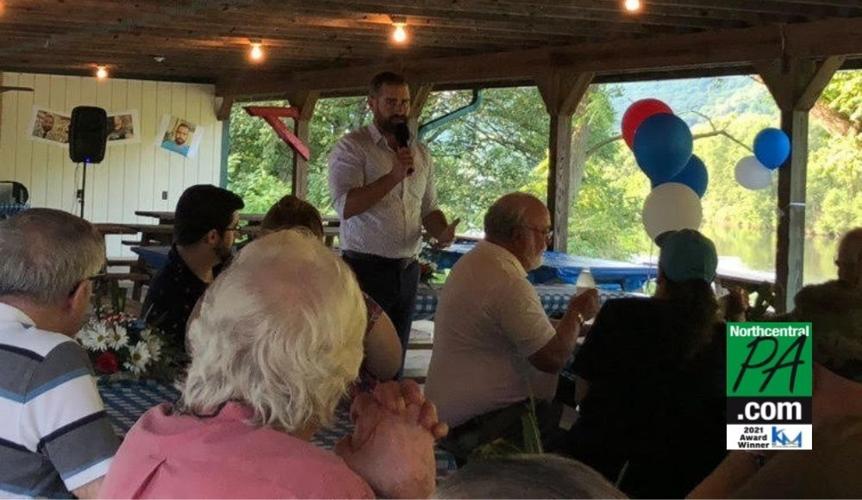 State Rep. Brian Sims (D-Phil.) speaks to guests at an event held for him at Sons of Italy Campground in Lock Haven, July 31.

To many, Brian Sims strikes a posing figure at six feet tall. His physical stature makes him more noticeable than many of his colleagues in the Pa. State house of Representatives, and his messaging stands out in the news, on television, and on social media.

Sims, a Philadelphia state representative, is frontrunner for the Democratic nomination to be the next lieutenant governor of Pennsylvania. Not a stranger to challenging tradition, he came to visit northcentral Pa., but stayed in a very non-traditional way.

Driving his Jeep and utilizing the camping app Tentrr, a campfire and hammock tent were Sims' only accommodations by choice when he drove to the area from Philadelphia the morning of Fri., July 30, for what originally was supposed to be a one-stop event the next day outside Lock Haven at the Sons of Italy Campground, hosted by area resident Dr. Rick Schulze, realtor Brady Carnahan, and his husband, John.

But Sims did not come alone. Almost always in his company is Sims’ black Newfoundland dog, Temper. “So, her full name is Temperance Anne Sims. Anne with an ‘E’,” he said with a laugh.

Sims located a private spot on a farm near Blanchard in Clinton County, just outside Bald Eagle State Park.

“I usually won’t do hotels unless it's super cold out,” he said. But even at a remote campsite in the heart of the state of Independence, Sims was not capable of escaping his own identity.

By his own omission, Sims said that his camp host did some research on him. “You’re a politician,” the camp host said when he discovered who Sims was. He proceeded to thank Sims for his work advancing equity in the state.

Ten years since he began serving as state representative for Philadelphia’s center city, Sims endorsed his choice to replace him in the state house next year, Deja Alvarez.

A meeting and a meet-and-greet at the Old Corner in Lock Haven, hosted by Democrats in Clinton County were on his schedule. From there, Sims made his way down the road for a friendly dinner gathering at Old Farmhouse Eatery and Brewery in Bellefonte, organized by 2022 state house candidate Amanda Waldman.

Sims reminisced about his pre-law days at Bloomsburg University, about why he originally planned to attend Cornell. He joked about the irony of being a male football player at a college historically known for mostly female athletes.

Sims, a former football captain and fraternity member, was responsible for the banning of hazing on the Bloomsburg college campus.

“It was stupid,” he said about hazing.

Sims openly chatted about his family life; about his twin brother, who “looks nothing like me. Has blonde hair, blue eyes, kids,” he joked.

His parents, who live on a man-made lake community (in “Narnia,” Virginia, as called it) were both Colonels in the Army, and he spent most of his life on a military base. His mother usually was the highest-ranking woman on base, he said.

Sims has been seeking the nomination for lieutenant governor since Feb. 15, 2021.

“We have gathered a lot of social and political science from this last election cycle,” Sims said at the the Sons of Italy Campground on Sat., July 31. “And it turns out something is very true. That the people who screamed the loudest, did the least for their candidate.”

There are 700,000 more Democrats than Republicans in Pa., and Sims said he believed the state is not Republican-leaning, but the opposite.

Shapiro is the first Democrat to be elected Attorney General of Pennsylvania.

Sims spoke with passion about the divisive state of politics in the commonwealth.

“Part of the reason Pennsylvania’s Republicans have been so aggressive in these last several years is the reason they attack everything from trans kids, to unmarried parents, to children. They know that they are losing,” he said. “The people of Pennsylvania don’t believe in those divisive, nasty politics. And so things are changing,” he said.

“Respect for people that aren’t like us is a part of the sort of American fabric that was written right here in Pennsylvania, but hasn’t played out in our politics. And that’s changing.”

Like sleeping in a hammock, Sims was also unconventional in another area - he did not ask for money.

“Right now I don’t need your financial support. What I really need is your voice. Your leadership. Your guidance. We’re going to be talking about what it looks like to finally have equality across the state for all citizens of Pennsylvania.”

“We’re going to be talking about what it looks like to respect and protect the people around you instead of being fearful of them,” he said.

Sims took questions from the broad audience, which had attendees as far away as Luzerne County.

At a separate event recently in Marlton, N.J. for Deja Alvarez, his choice to replace him in the state legislature, Sims agreed to record clips supporting the “U=U” (Undetectable = Untransmittable) public relations campaign, and other services provided by Aids Resource, which has offices in Williamsport and State College.

Pa. has had unique experiences with equally unique lieutenant governors like John Fetterman, and Mike Stack, who now is pursuing a Hollywood career.

What were some of the highlights from his return to the area?

“Without question, it's how much everybody wants to talk about that potential for the future here in the region,” Sims answered. “Everyone here has been impacted by the politics of the Trump-era. And everyone here is excited to be impacted by the politics of the Biden-era, but they recognize that right now the work really needs to go into local elected offices, and local candidates.

Sims has received several threats against his life; he said perhaps because of the emboldened way he speaks and campaigns. He said it's the people who can help support his cause.