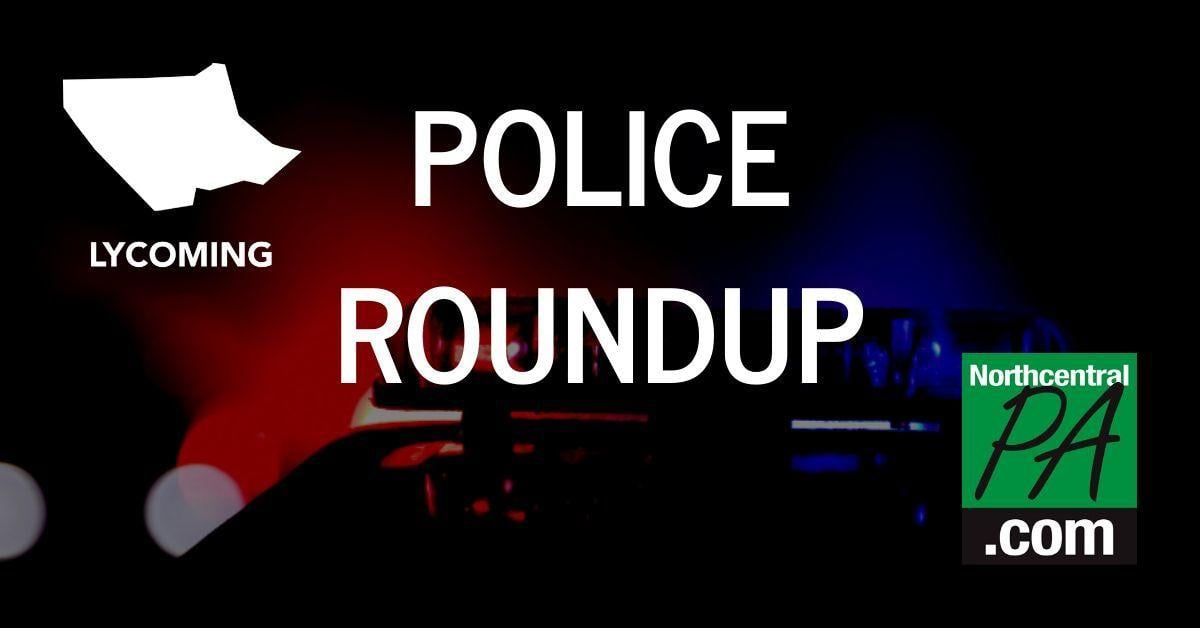 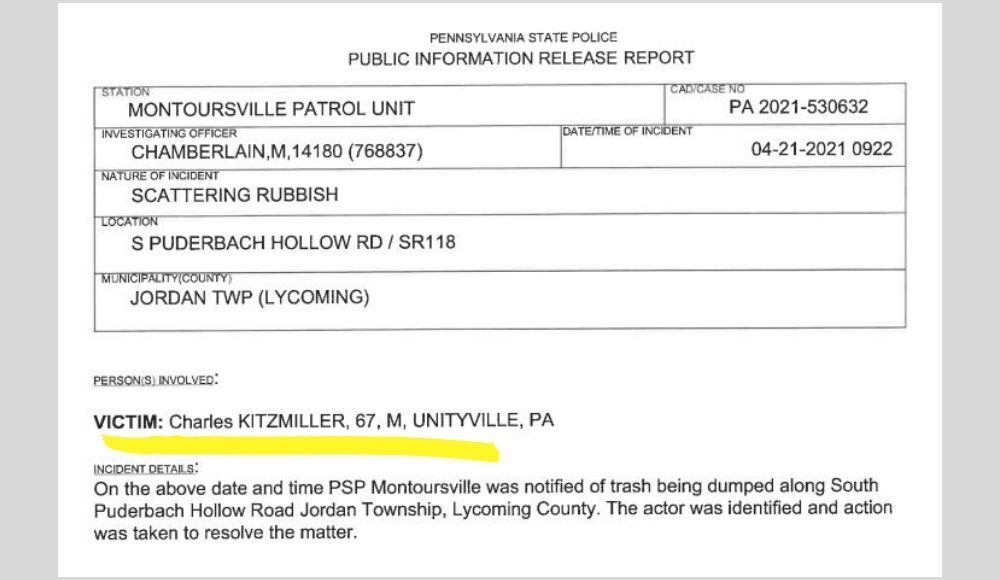 5/5/2021: A correction has been made to an entry in this roundup. Scattering Rubbish, 9:22 a.m. April 21: Charles Kitzmiller of Unityville, Pa. was identified as the victim of rubbish scattering on his property. Kitzmiller was incorrectly listed as the suspect in the original article.

The police report has been included to verify the correction.

PFA Violation, 9:09 p.m. April 25, Bakers Rd., Cogan House Township. Police investigated a possible protection from abuse order violation. During the investigation it was found a violation did occur and Chad Harter, 40, of Trout Run, was arrested.

Theft from Person No Force, 6:30 p.m. April 24, Randall Circle, Loyalsock Township. Police responded to a residence to investigate the theft of a bicycle from a front yard. The incident is pending further investigation.

Harassment Physical Contact, 6:15 p.m. April 23, Moreys Tavern, 2010 E. Third St., Loyalsock Township. Police responded to a report of a fight. Upon further investigation, it was determined one individual was told to exit the tavern and refused to do so. The individual, a 38-year-old man of Williamsport, then engaged in pushing, shoving, punching and kicking three other individuals who were trying to assist with his removal. Charges will be filed against the individual, who police did not name in their report.

Found Property, 5 p.m. April 23, Vernon Ave., Williamsport. Police said a bicyclist found an iPad model A2200 with a cracked screen along Sulphur Springs Road and turned it in to police. Anyone with information on ownership of the iPad may contact PSP Montoursville.

Criminal Mischief Under $1,000, Between 5 p.m. April 20 and 12 p.m. April 21, Becker Hill Rd., Loyalsock Township. Police investigated an incident during which the rear windshield of a Chevrolet Malibu was damaged.

DUI on View Alcohol, 2:08 p.m. April 20, 241 Back St., Upper Fairfield Township. Police responded to a welfare check for Eric Craver of Back Street. Craver fled the scene before patrol units responded and was reported to be under the influence of alcohol. Craver was located at Rite Aid, arrested for suspicion of DUI and was treated at UPMC Williamsport. Charges pending blood results.

Burglary Residential No Force, Between 2 and 3:45 a.m. April 18, Randall Circle, Loyalsock Township. Police said an unknown suspect entered a residence through a window and stole a sunflower shaped key ring, blue in color.

Burglary Residential No Force, Between 11 a.m. and 12:48 p.m. April 16, State Route 287, Cogan House Township. Police received a report that a person was scattering rubbish, including a wooden garage door with glass windows. Further investigation to follow.

Death Natural, 4:42 p.m. April 13, Black Forest Inn, North State Route 44, Brown Township. Police were dispatched to the area of North State Route 44 to assist Tiadaghton Police Department to locate a person reported as missing. The individual was located inside a motel room appearing unconscious and having a possible medical emergency. The individual was transported to Geisinger Jersey Shore hospital to receive further medical attention. The Lycoming County Coroner’s Office later contact PSP to notify them that the individual was declared deceased at the hospital.

DUI Crash Alcohol, 12:39 a.m. April 11, 2100 block of State Route 405, Muncy Creek Township. Police responded to a crash on State Route 405 near Heatherbrooke Estates. The driver, Jamie Moore, 45, of Hughesville, fled the scene and further investigation found her highly intoxicated at her residence where she admitted to driving, police said. Moore was taken into custody for suspicion of DUI. Charges are pending blood results.

Theft of Items from Motor Vehicle, Between 10 a.m. and 2:30 p.m. March 26, Mr. Tire, 1950 E. Third St., Loyalsock Township. Police said someone stole a pair of Rayban sunglasses from a victim in the lobby of Mr. Tire. Anyone with information may contact PSP Montoursville.

Drug Possession, 5:11 a.m. Feb. 28, W. Third St., Williamsport. Police said Chelsi Hess, was transported to Lycoming County Prison and was found to be in possession of narcotics while going through intake. Hess is incarcerated at SCI-Muncy and charges are pending.

Theft All Other, 8 a.m. Feb. 8, Randall Circle, Loyalsock Township. Police are investigating a case of identity theft that occurred sometime in February 2021. The victim reported that unauthorized charges were made using her identity in the amount of $1,300. The charges were made for an emergency room bill.

Theft by Deception ID Theft, Between Feb. 14 and March 17, 1900 block of Walters Rd., Loyalsock Township. Police said an unknown suspect used a victim’s personal ID to make a false claim for pandemic assistance from the Department of Labor and Industry. The victim was able to deny the claim.

Anyone with additional information on these incidents may contact PSP Montoursville at 570-368-5700.

Woman sentenced for possessing 16 heroin bricks with intent to deliver