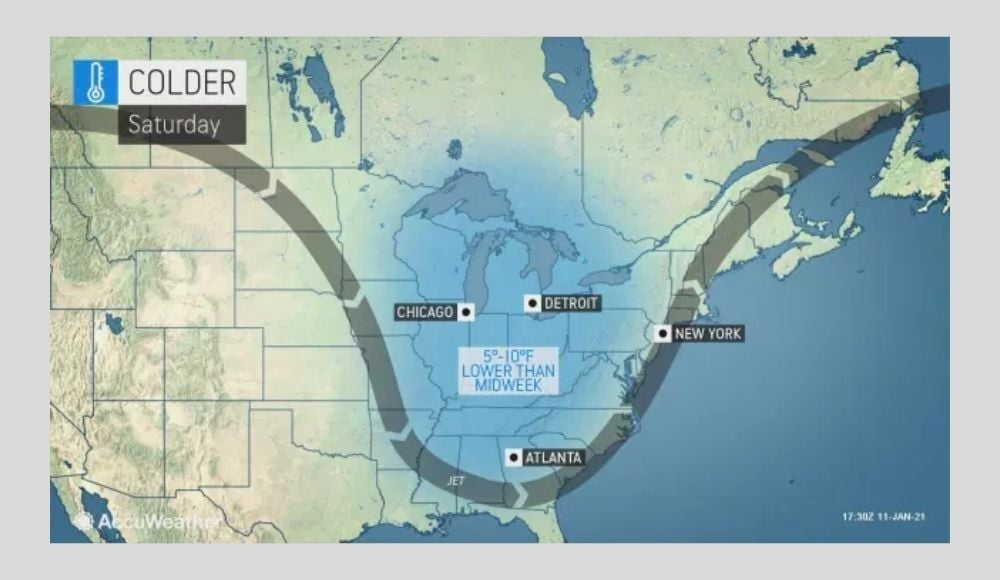 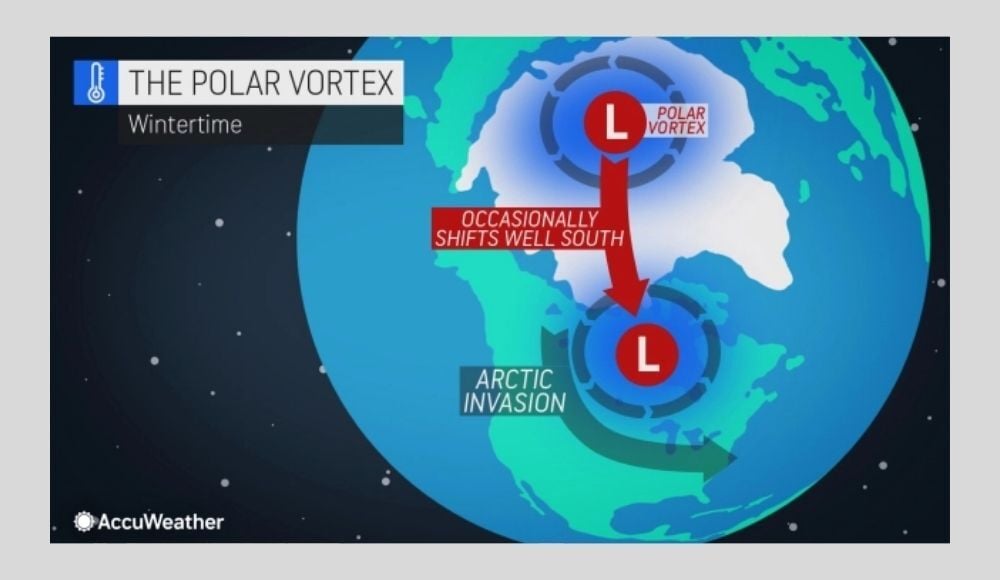 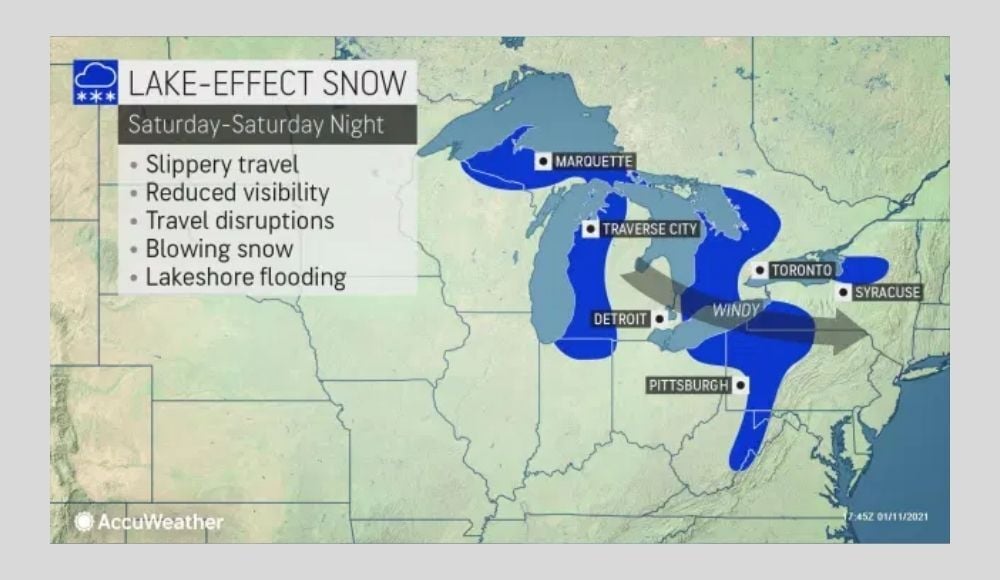 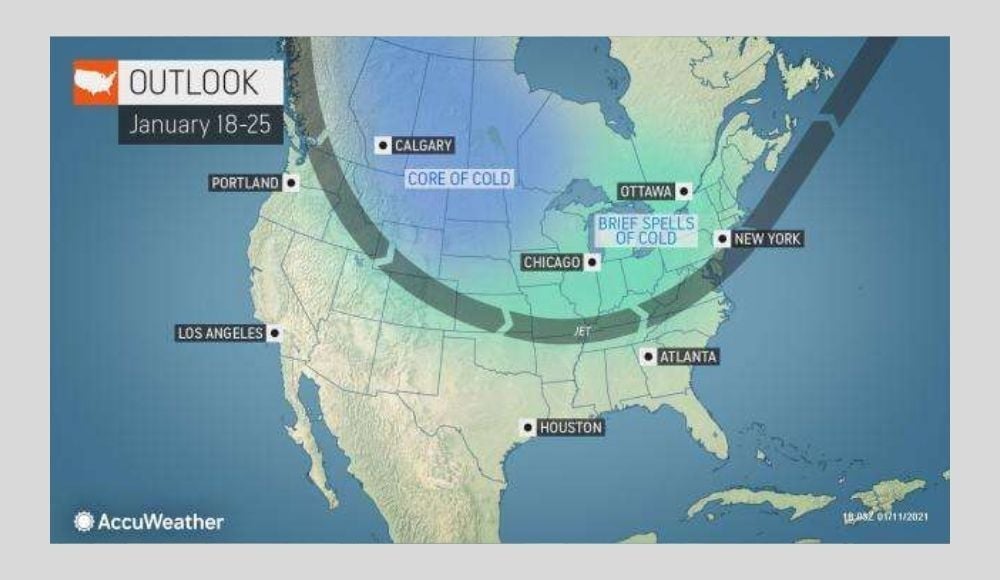 A change in the weather pattern later this week could set the stage for more snow across the East Coast for the month of January, with some help from a familiar winter friend - the polar vortex.

Above-normal temperatures has been one of the weather stories across much of the East Coast so far in 2021. During the first 10 days of January, Raleigh's temperatures were around 2 degrees F above normal, while cities like Syracuse, New York, Cincinnati, and Washington D.C., recorded temperatures around 5 degrees above normal.

The abnormal warmth is forecast to hold on for most locations through the middle of the week. In fact, temperatures are expected to soar into the lower to middle 50s during the latter half of the week for locations from Nashville to Washington D.C., which is 10 degrees above normal for the middle of January.

But, the milder March-like conditions are not anticipated to stick around much longer with AccuWeather meteorologists predicting the return of a more typical winter chill by the end of the week.

Temperatures will start tumbling in the Northern Plains and Midwest on Thursday, but the cooler air will likely reach places like the Ohio Valley on Thursday night and Friday. The cold is due to reach New England, the East Coast and even down into the southern Appalachians by late Friday or Saturday.

Temperatures are predicted to fall as much as 10 degrees from their peak moving into the middle of the week. The first wave of cold air will merely send temperatures back to average.

The return of the cold is, in part related to the weakening of the polar vortex, which is a storm that holds over the northern latitudes of the globe, usually keeping the coldest air locked up in the Arctic.

As the polar vortex weakens, sometimes it is able to drift southward, bringing a dose of Arctic air with it.

Exactly how far southeast the polar vortex is able to drift will determine the intensity of the cold across the Central and Eastern states, as well as how long the cold air will last.

"The latest indications are that the core of the cold air will set up over Central Canada with some southward extension into the North Central states," according to AccuWeather Senior Meteorologist Alex Sosnowski.

"Arctic air that reaches the Eastern states during the second half of January is likely to be brief and fragmented, rather than a steady persistent stream that lasts for weeks and certainly not as extreme as major dips of the polar vortex over the years," Sosnowski said.

The presence of below-freezing temperatures is likely to increase the chance for snow in the eastern-third of the United States, and especially the Northeast.

The first round of snow could arrive with the push of cold air late this week. While a brief burst of snow could happen to end the week across the Northeast, the lake-effect 'snowbelt region' is most likely to experience more persistent snow.

As the cold air rushes over the Great Lakes, snow squalls could be possible downwind of the lakes throughout the weekend.

A dip in the jet stream across the eastern half of the country is likely to hold on for much of the third week of January. As such, cold air will remain in place and the opportunities for snow will continue.

It's not out of the question that more storms could trek across the northern tier of the country and deliver quick bursts of snow, or that a storm could follow the jet stream and impact the East Coast early next week.

"The weather pattern setting up across the East suggests the potential for a big storm to develop in the Plains and potentially impact the mid-Atlantic or Northeast around Jan. 18 or 19," said AccuWeather Long-Range Expert Paul Pastelok.

Pastelok went on to explain that there should be plenty of cold air in place ahead of the storm. It is because of this, that the snow potential could cause things like difficult travel, power outages and virtual school and business disruptions.

Should the storm slow down, it could hit the nation's capital on Inauguration Day, Wednesday, Jan. 20.

Woman says 'copy' of herself must have smashed car windows on Christmas Eve: Montoursville PD