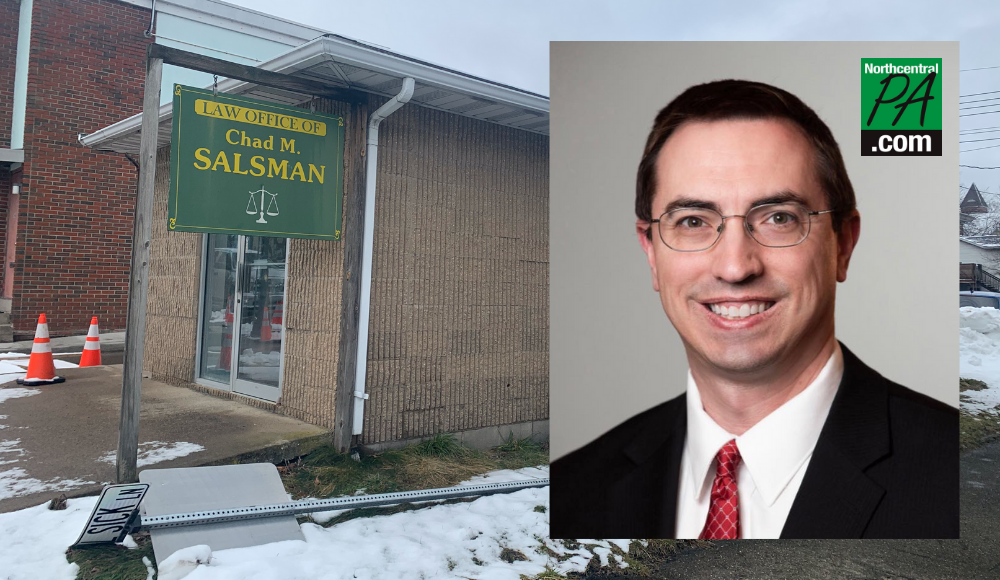 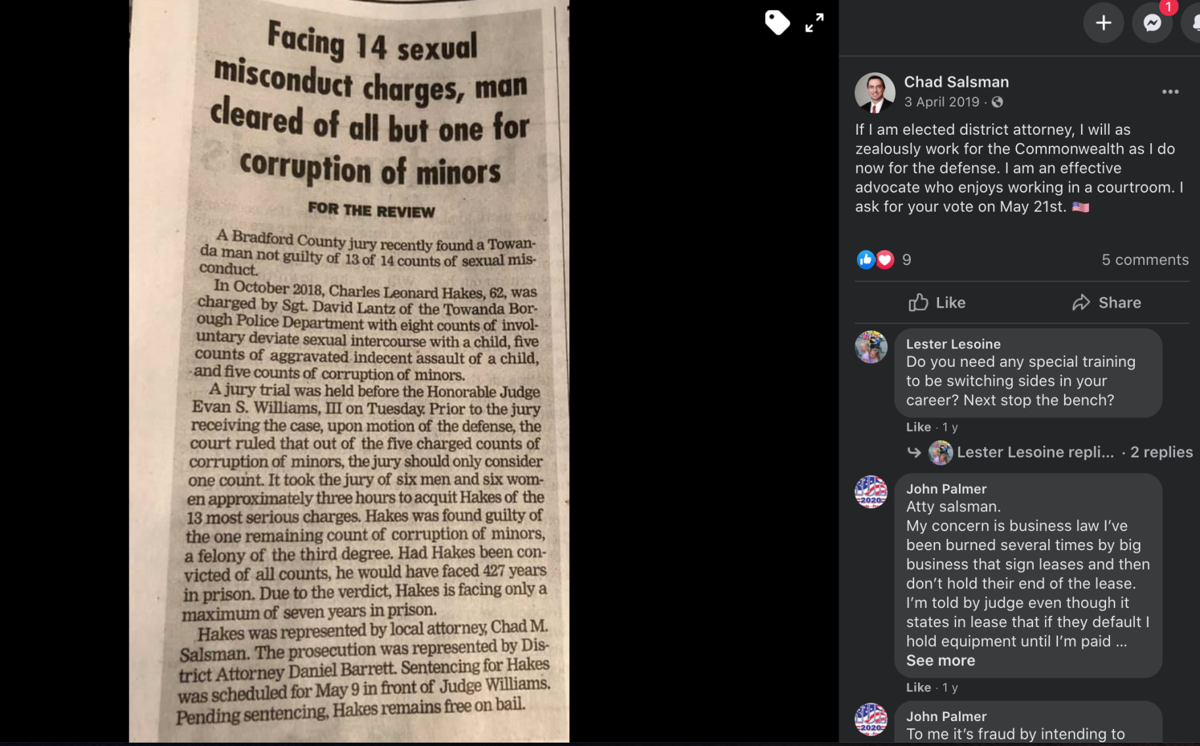 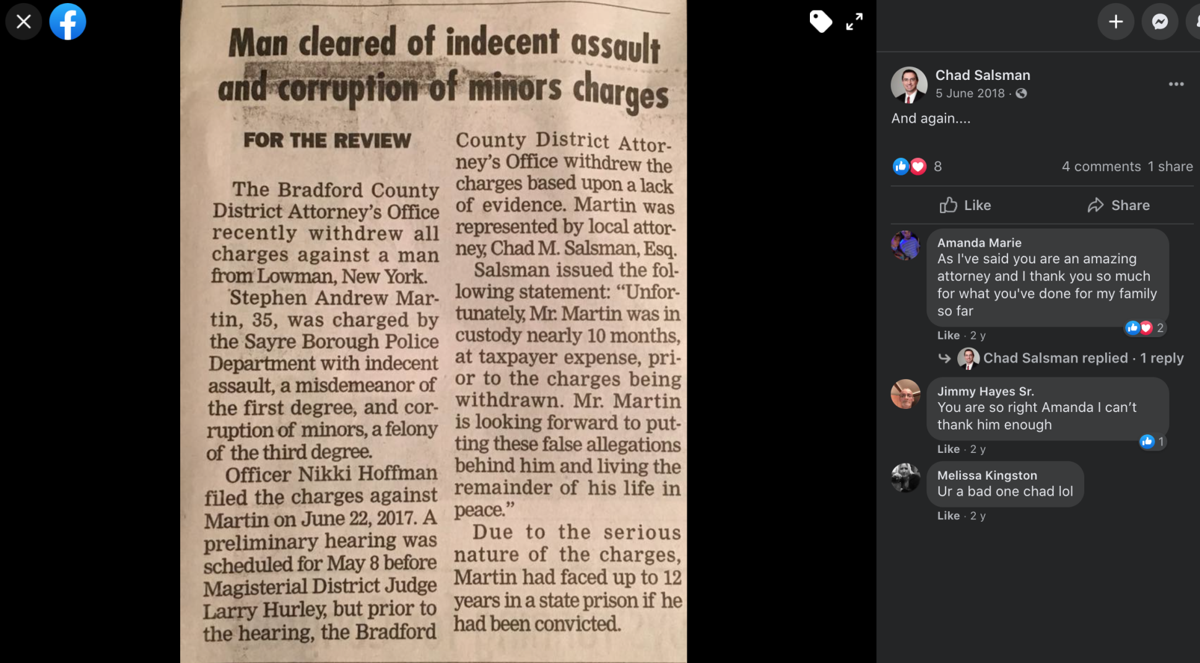 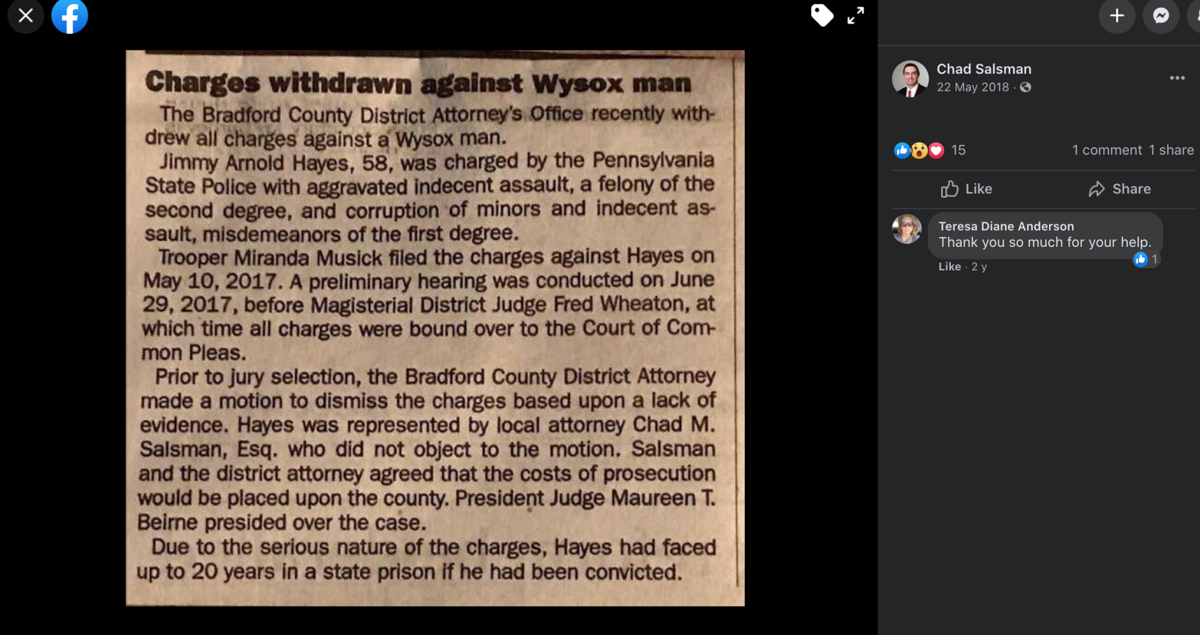 The YouTube video, which has since been removed from the site, was sent to NorthcentralPa.com in the form of a news tip from a concerned Bradford County citizen. The video was created and posted by a man named Robert LeVesque, who claims to have worked for individuals who he alleges are involved in drug and sex trafficking, and to have received multiple tips and statements from victims.

In the video LeVesque alleges that Bradford County was a major human trafficking hub, and further alleged connections between a local motorcycle club and District Attorney Chad Salsman.

Human trafficking is a well-documented issue in Central Pennsylvania, particularly along major roadways like Route 15 and Route 80.

In 2018, an article published in the Daily Review by Brianne Ostrander detailed the county’s “secret problem” of human trafficking "tucked away beneath the atmosphere of friendly, sleepy, farm town Pennsylvania." The article, which was referenced in LeVesque's video, explains the crimes are “difficult to prove and hard to prosecute” noting the prevalence of “sex trafficking in the form of adults selling their children for sex in exchange for amenities.”

In recent years, advocacy groups have worked to educate the public on human trafficking, warning signs, and how to help. In 2019, On the PULSE News produced a three-part series detailing human trafficking. The series interviews a survivor who was trafficked by her mother, local officials who formed a task-force, and leaders of advocacy organizations that provide support to victims of trafficking in Lycoming County.

NorthcentralPa.com was in the process of investigating the claims made in LeVesque's video when Salsman’s office was raided by police on Dec. 22.

PSP Towanda would only state the investigation is being handled by the Attorney General’s Office. The Attorney General’s Office would not comment on the investigation. The search warrant for Salsman’s office was not filed with any courthouse in Bradford County. A right-to-know request has been filed for a copy of the search warrant for the DA’s Office.

On Dec. 23, WNEP16's Elizabeth Worthington reported that “Salsman is under investigation for accusations of inappropriate behavior while he was acting as an attorney for parents in Susquehanna County Children and Youth cases.”

Salsman has publicly touted his success in defending clients charged with sex-related crimes.

Using his Facebook page, Salsman has posted images of multiple articles detailing individuals he has represented. Charges were dropped for each defendant, and each case dealt with “corruption of minors” charges.

One of the posts links an article about a man Salsman represented who was facing 14 sexual misconduct charges. The man was found guilty of one. Salsman posted a photo of that article along with a pitch for his campaign for District Attorney.

A different case resurfaced in a criminal affidavit filed in Wysox Township as recently as Dec. 2, 2020. In the police document, Jimmy Arnold Hayes, 60, of Towanda, is charged with multiple felonies for alleged sexual abuse of minors less than 13 years old.

The name Jimmy Arnold Hayes also appears in one of Chad Salsman's Facebook posts from 2018.

Hayes’ case was one that Salsman posted about on Facebook, including a photo of a news article titled, “Charges withdrawn against Wysox man.”

The PSP affidavit filed on Dec. 2, 2020, again naming Jimmy Arnold Hayes, involved the same minor-aged accusers as the 2017 case which Salsman posted about on Facebook.

According to the affidavit, in the course of the investigation of recent allegations against Hayes, it was discovered that one of Hayes' accusers had been medically examined in Feb. 2017. The findings of the medical examination were consistent with the child's allegation of sexual abuse, according to police, and “greatly supports [the accusers’s] claim with physical corroboration by a medical professional.”

The medical examination of the accuser occurred in 2017, prior to Hayes' charges being dropped. Police did not know about the examination nor did they enter it as evidence until the case was reopened in Nov. 2020 as a result of new accusations by one of the accusers from 2017.

The final lines of the Hayes affidavit state that the Bradford County District Attorney Chad Salsman “has recused himself of prosecution” and the case “has been referred to the Pennsylvania Attorney General.”

Prior to serving as District Attorney, Salsman served on the Wyalusing School Board, of which Salsman is an alumni, for 13 years while working as a defense lawyer. He has both worked with organizations that support children throughout his career, and has a long record of defending cases involving sexual abuse of minors dating as far back as 2009.

Salsman is not the first official of Bradford County to be investigated.

In 2016, the Pennsylvania Judicial Conduct Board filed judicial misconduct charges against Michael G. Shaw, who served as a judge for the Bradford County Magisterial District "for having sex with the girlfriend of a defendant, sending her salacious texts, and letting his own lawyer practice before him without telling the other parties."

In 2007, Common Pleas Judge John Mott lost his bid for retention after his wife, Brenda Mott was sentenced in January 2006 for stealing $520,000 from the local water and sewer authority.

Salsman did not return our requests for comment. As of Jan. 3, the office phone line for Salsman’s Private Law Office states it is “permanently closed.”