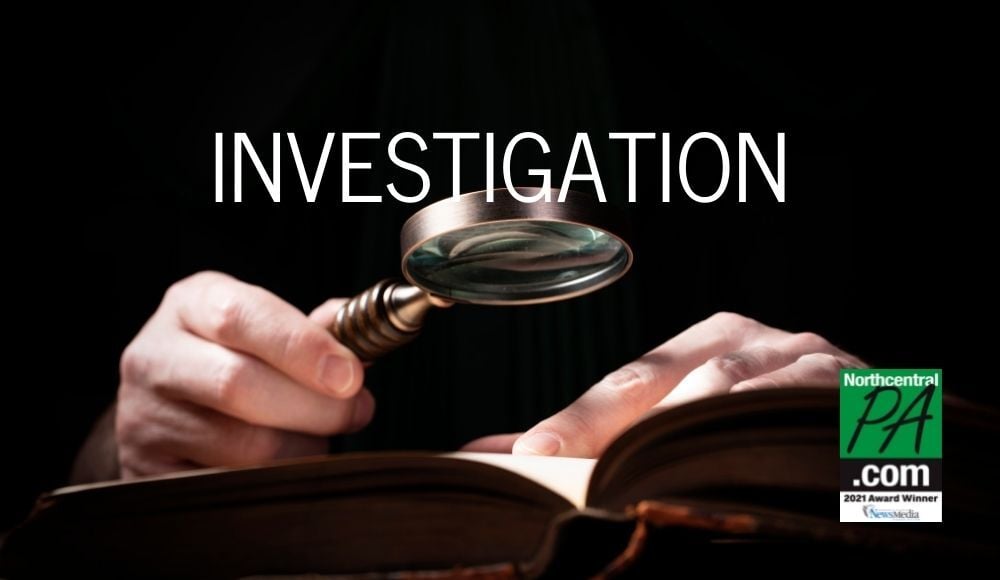 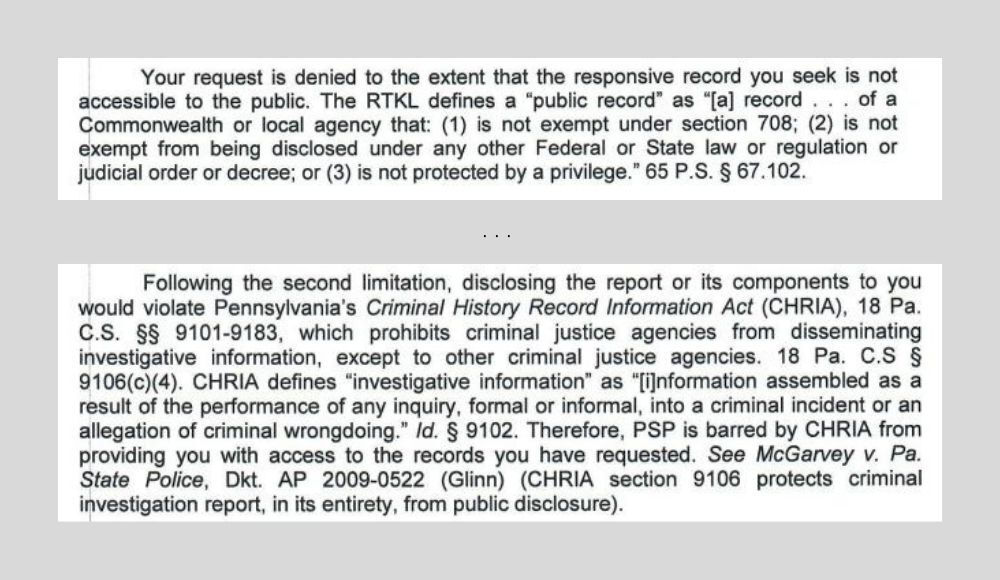 Exerpts from the RTK denial issued to Lettiere on Mar. 6, 2020 from the Bureau of Records & Identification in Harrisburg, Pa. 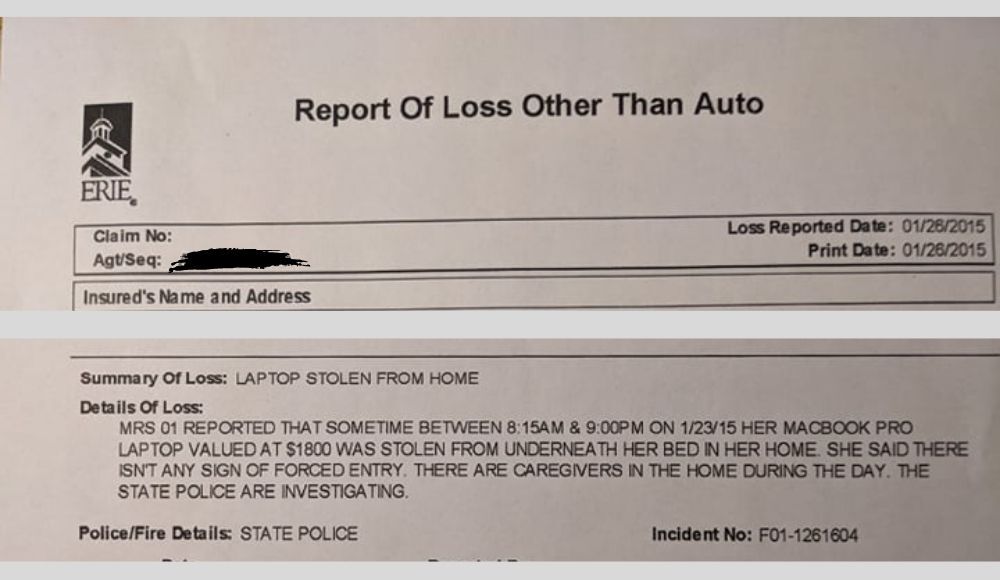 The Details of Loss regarding the alleged theft of a Macbook Pro from a Trout Run, Pa. home, reported on Jan. 26, 2015.

Williamsport, Pa. -- When Joseph Ekman, founder and CEO of California-based Hartnell De La Guerra Corporation and Chairman of the Board for About The Kids Foundation, read news coverage in January 2020 about suspended Pennsylvania State Trooper Johnathan Buynak, 36, connected with crimes allegedly committed by Amanda Fenderson, he said he noticed what he believed to be an error in the narrative right away.

The January 2020 news coverage was about Buynak's surrender and criminal charges that included theft, impersonating a public servant, obstruction, and official oppression.

Buynak's story was intricately weaved with that of Amanda Fenderson, 34, of Montoursville, who had been accused of of stealing personal items from a family for whom she was employed, forging a check, and using the family's debit card to withdraw $60 without permission, according to a police affidavit filed January 22, 2020.

The inaccuracy, Ekman claimed, was in a detail about how Buynak and Fenderson met. According to the affidavit, in 2019, Buynak was off duty and met Amanda Fenderson at the Brandon Cafe on Washington Boulevard. "They talked and exchanged phone numbers during the interaction and later communicated through text and phone conversations," wrote PSP Central Internal Affairs Division Corporal John D. Powis in an affidavit.

From California, Ekman called his his friend Lisa Lettiere in Montoursville, Pennsylvania, who he personally knew to be familiar with Ms. Fenderson.

According to Lettiere, Fenderson came to work in her home as a caregiver sometime in 2013 as an employee of Maxim Healthcare based in Muncy.

On January 23, 2015, Lettiere said she called Pennsylvania State Police in Montoursville to report the theft of her Macbook Pro, and filed a claim with Erie Insurance.

The Erie Insurance Report Of Loss Other Than Auto filed January 26, 2015, said, "sometime between 8:15 a.m. and 9 p.m. on Jan. 23, her Macbook Pro laptop valued at $1800 was stolen from underneath her bed in her home. She said there isn't any sign of forced entry. There are caregivers in the home during the day. State Police are investigating."

The caregiver in the home was Amanda Fenderson; the state police trooper who came to investigate the missing laptop was Trooper Johnathan Buynak.

Ekman and Lettiere said they couldn't help wondering, after reading the 2019 news reports about Buynak and Fenderson, was there a much earlier connection?

The documented history of Buynak and Fenderson

Police documents from Jan. 22, 2020 written by Corporal Powis outline Buynak's criminal activity that spanned the period of July 26 to Aug. 24, 2019.

On July 26, 2019, Trooper Johnathan Buynak responded to a report of a theft and forgery at a home on Rabbitown Road in Wolf Township, Powis reported.

The family accused their child's caretaker, Amanda L. Fenderson, 34, of Montoursville, of stealing personal items, forging a check, and using the family's debit card to withdraw $60 without permission, according to the affidavit.

At the time of his investigation into the alleged theft, Buynak did not disclose a conflict of interest: he already knew Fenderson on a personal level. Corporal Powis wrote that the pair had met in early 2019 at Brandon Cafe in Williamsport.

Buynak proceeded with the case as the lead investigator, the affidavit said.

Buynak's police report about the alleged theft from the Rabbittown Rd. residence referred to Fenderson as "Suspect #1," not by name, and failed to include documentation of investigative actions, any narrative, or interviews with Fenderson.

Three days later while he was on duty, Buynak allegedly went to the home and gave the owner $60, saying it was money from Fenderson being returned as part of a criminal investigation, according to the affidavit.

Fenderson was taken into custody on Aug. 8, 2019, for an unrelated incident on July 27, 2019, and charged with second degree felony burglary court records stated.

On Aug. 9, 2019, the Wolf Township family left a message on Buynak's state police voicemail that a prescription pill bottle belonging to them was found in Fenderson's possession when Montoursville Borough Police arrested her. Buynak never returned the call, nor would he return three additional calls made by the homeowner, the affidavit stated.

While Fenderson was in Lycoming County Prison on Aug. 10, 2019, Buynak sent her message vouchers and exchanged personal, social messages with her through the prison text message system, wrote Powis.

Only after Buynak arranged bail for Fenderson and allowed her to stay in his home once she was released on bail, was the criminal investigation reassigned to a Criminal Investigation Unit Member at Troop F - Montoursville, according to the document.

A second set of charges

The Rabbittown Rd. accusation against Fenderson is not the only time Buynak and Fenderson have been linked with criminal activity, however.

In a second set of charges, Buynak is accused of impersonating a public servant to obtain financial gain.

A week after Buynak paid $772 to an agency to bail Fenderson from jail, Fenderson introduced Buynak to her friend, Thomas Dysktra.

On Aug. 22, 2019, Fenderson told Dykstra that she was working with Buynak on an undercover state police drug investigation. Buynak and Fenderson allegedly convinced Dykstra to withdraw $400 from his bank "to help with the investigation because requests for funds within the Department were slower than expected," according to the affidavit.

The next day the pair convinced Dykstra an additional $300 was needed for the investigation, which he allegedly produced from his personal bank account. And again on Aug. 24, he withdrew another $200 and gave it to Fenderson.

"On this occasion, Dykstra informed them he would not provide any additional money to either of them and questioned to validity of the undercover police investigation," Powis wrote.

Do you have information?

Ekman is seeking information from people who may have employed Amanda Fenderson as an in-home caregiver, and who also filed a police report with Trooper Buynak.

Ekman said he can't help but ask the question: Are there others?

"I'm asking if there are other families who employed Amanda Fenderson, and who gave a police report to Trooper Buynak, to contact me," he said. "How many other 'non-incidents' are out there?

According to Lettiere, no information was ever provided from the PSP regarding the investigation of her missing laptop. She alleges an investigation did not occur.

Ekman and Lettiere said they have attempted to access the original incident investigation report allegedly made by Buynak on January 23, 2015. Their request for information Right To Know pursuant to Pennsylvania's Right-to-Know Law (RTKL) was filed with the Office of Open Records in January of 2020.

The request for documentation was denied. According to correspondence from PSP headquarters in Harrisburg, the request was denied "to the extent that the responsive record you seek is not accessible to the public." Grounds for denial listed in the letter included "complaints of potential criminal conduct other than a private criminal complaint"; the documents "reflect the findings and conclusions, as well as the actions, observations and notes of investigating troopers ... all of which are exempt from public disclosure"; "the report also contains identifying information, all of which are exempt from public disclosure."

Ultimately, according to the letter, disclosing the requested incident number, FOI-1261604, the incident number allegedly assigned to the theft of the Macbook Pro, "would violate Pa.’s Criminal History Record Information Act which prohibits criminal justice agencies from disseminating investigative information, except to other criminal justice agencies."

Buynak appeared with his lawyer in court again on Friday, July 23 for a motion to compel discovery. He faces further court dates on Aug. 31 for an omnibus motion, and again on Sept. 17 for criminal pre-trials, according to the calendar of events listed in a docket.