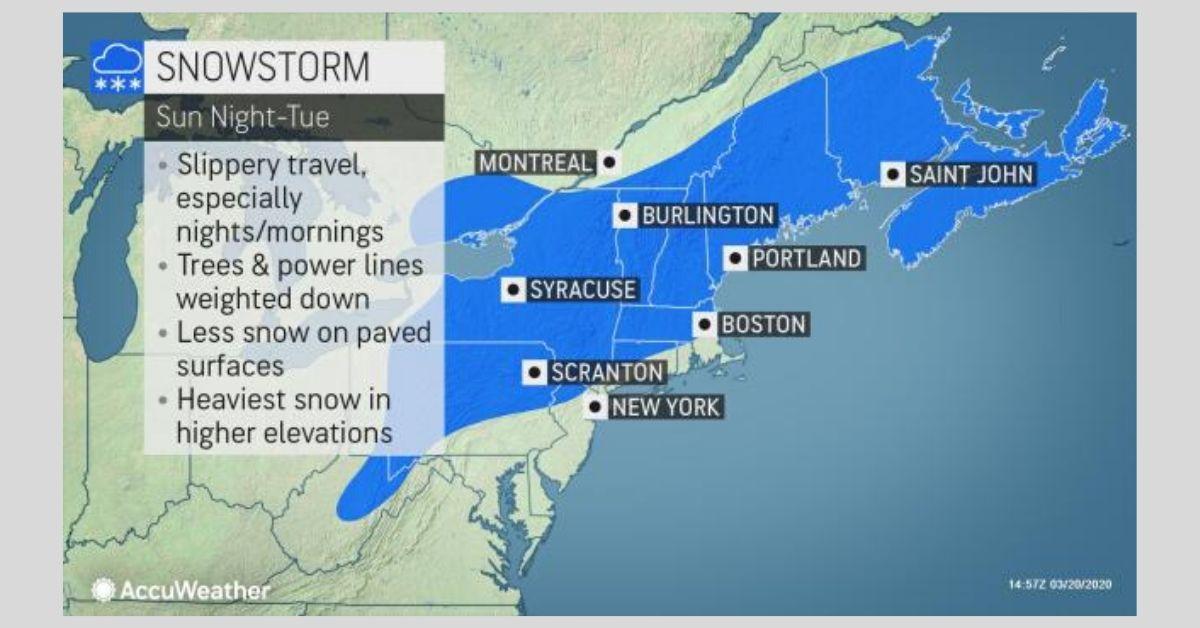 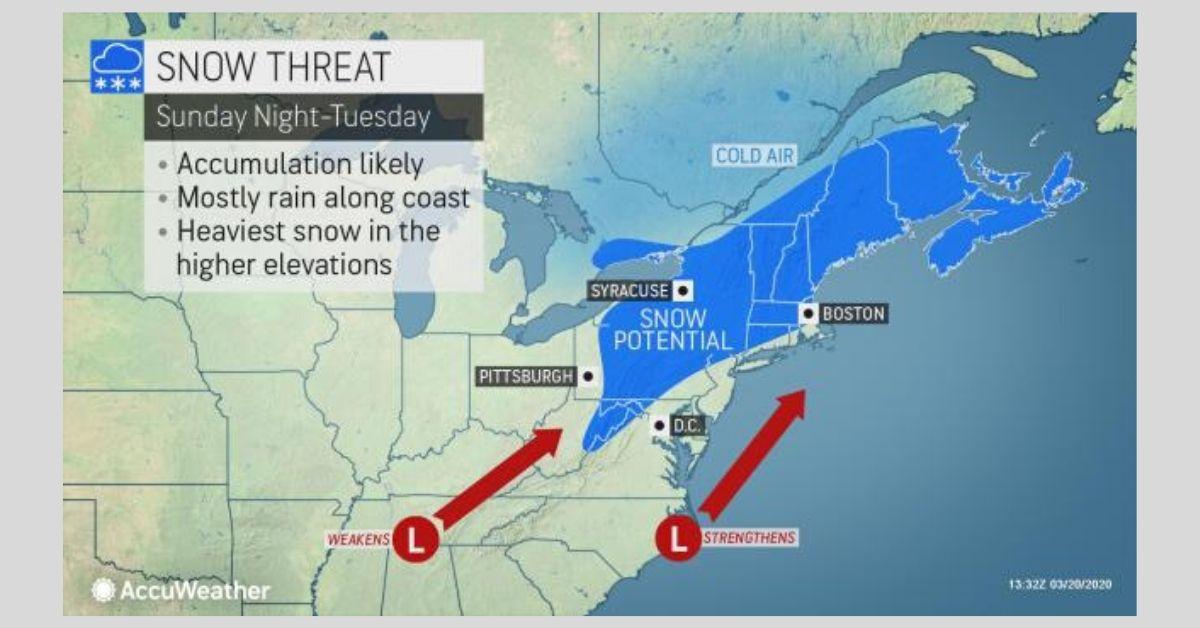 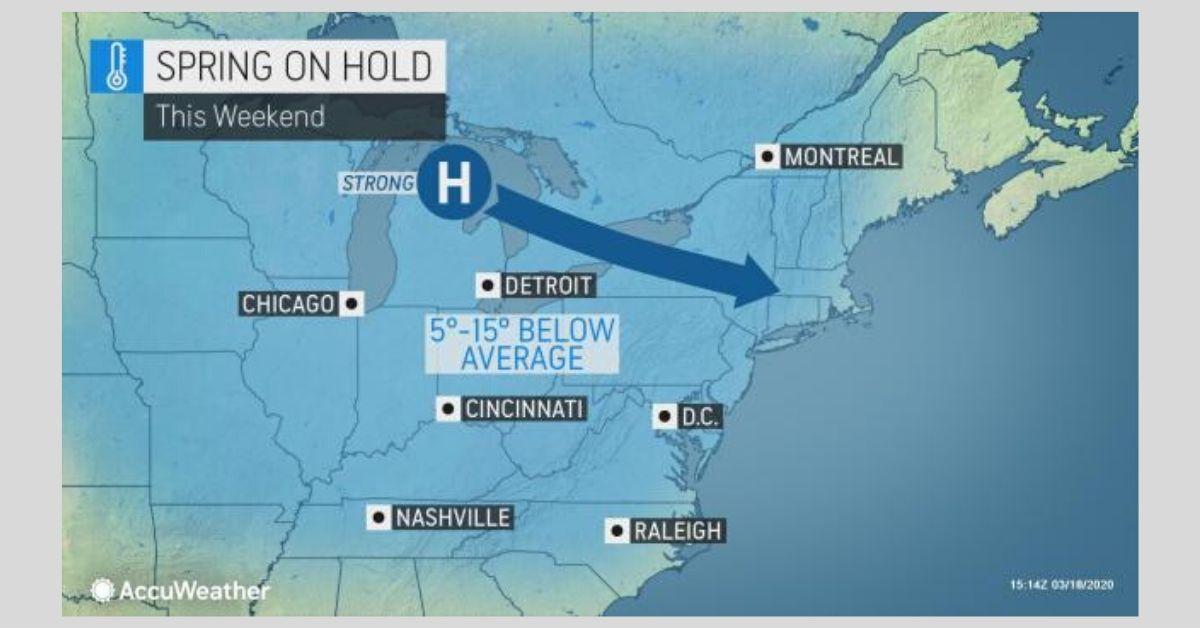 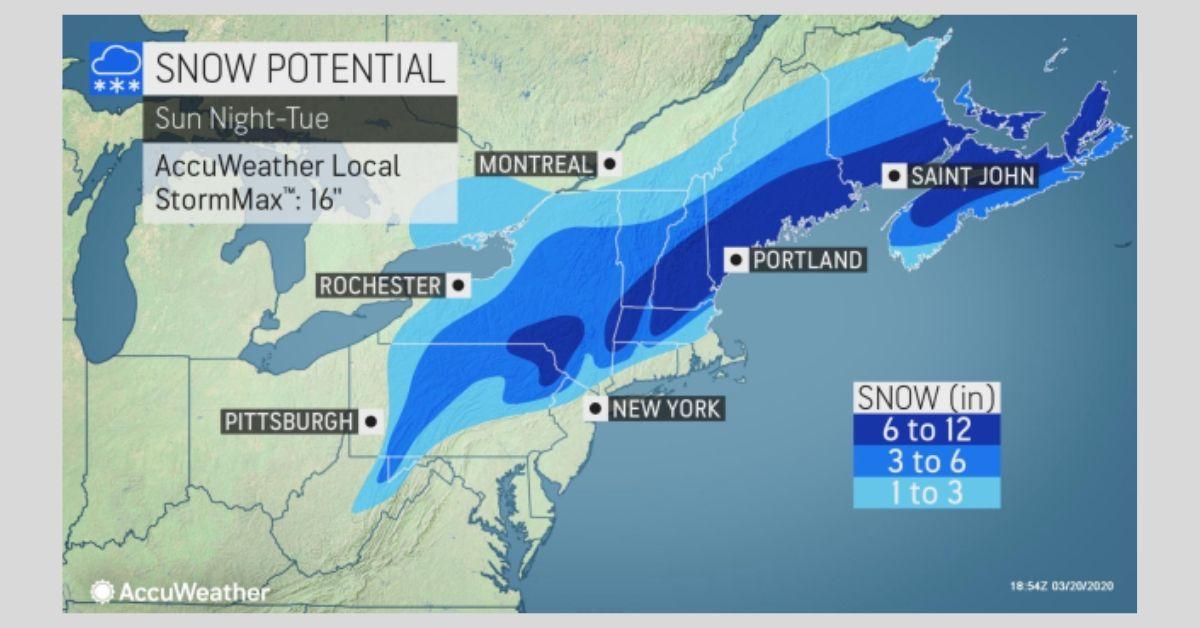 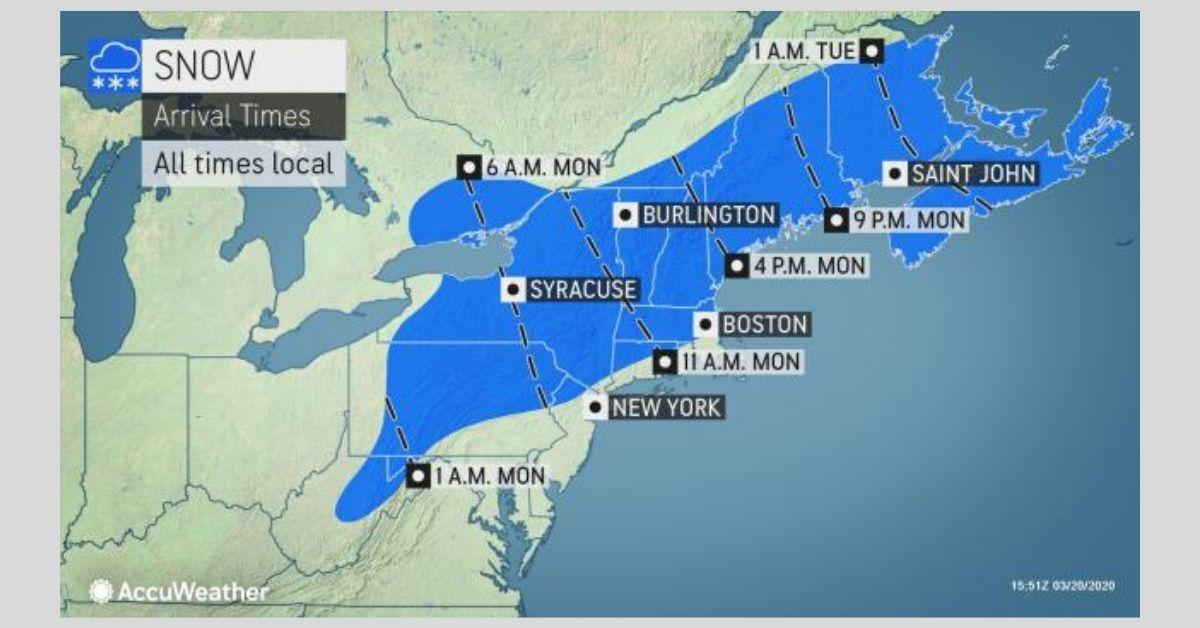 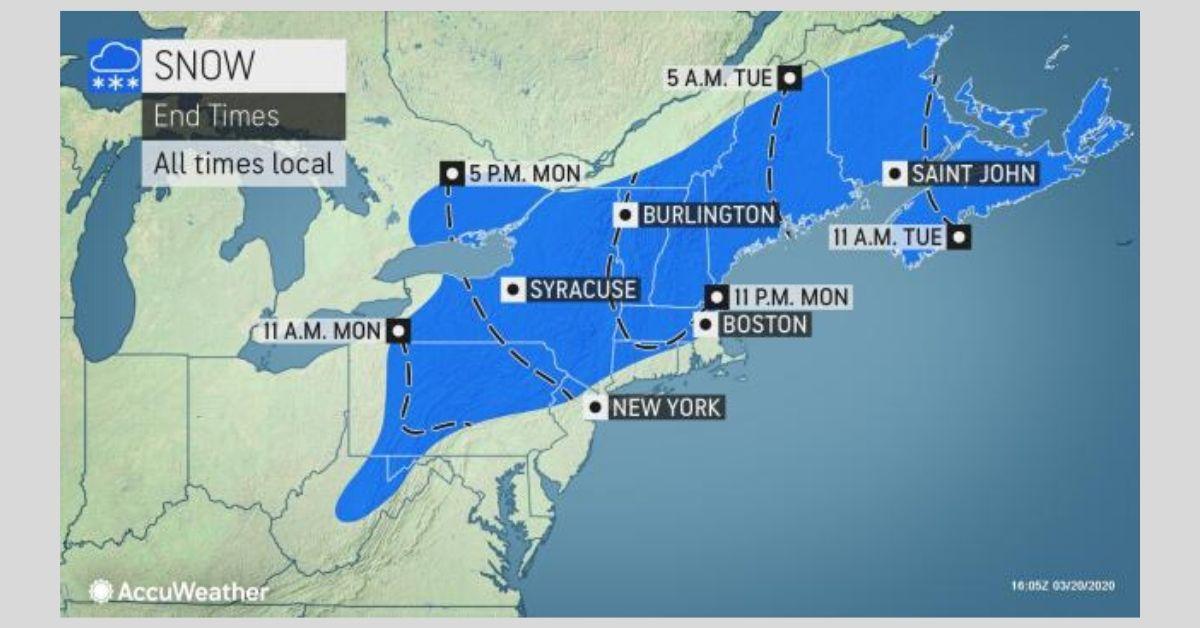 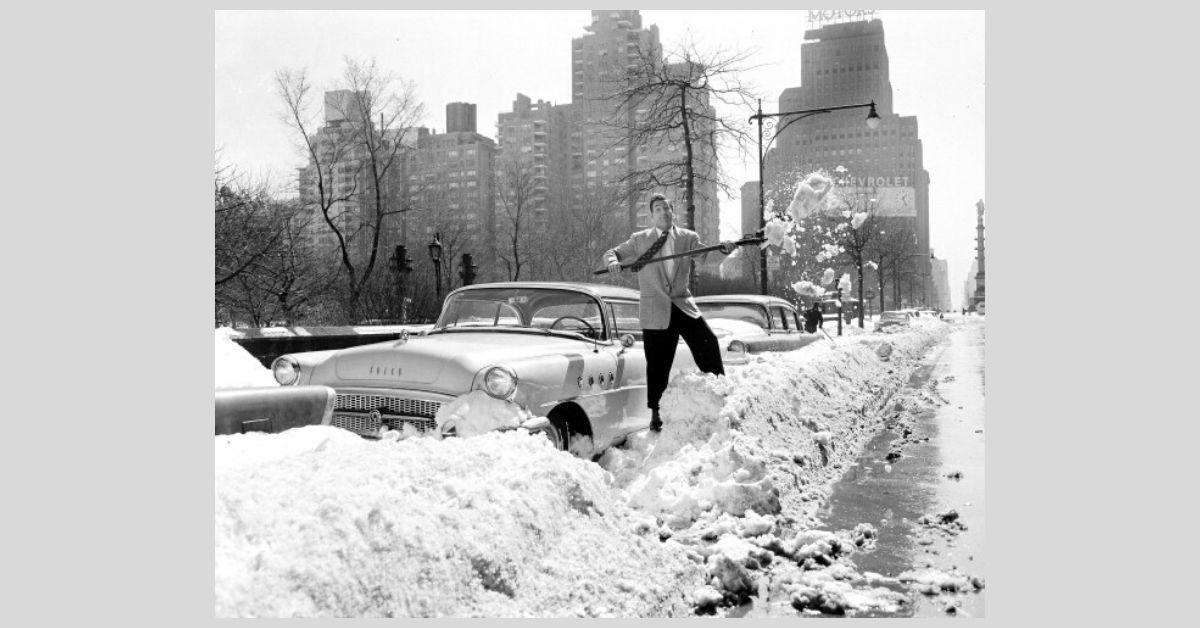 The snowstorm was no joke for television comedian Ben Wrigley who has to shovel show away from his car on Central Park West at 61st Street in New York, March 20, 1956. The staggering snow-clearing job got underway in the city following the 24-hour blizzard. Source: AP Photo/Jacob Harris 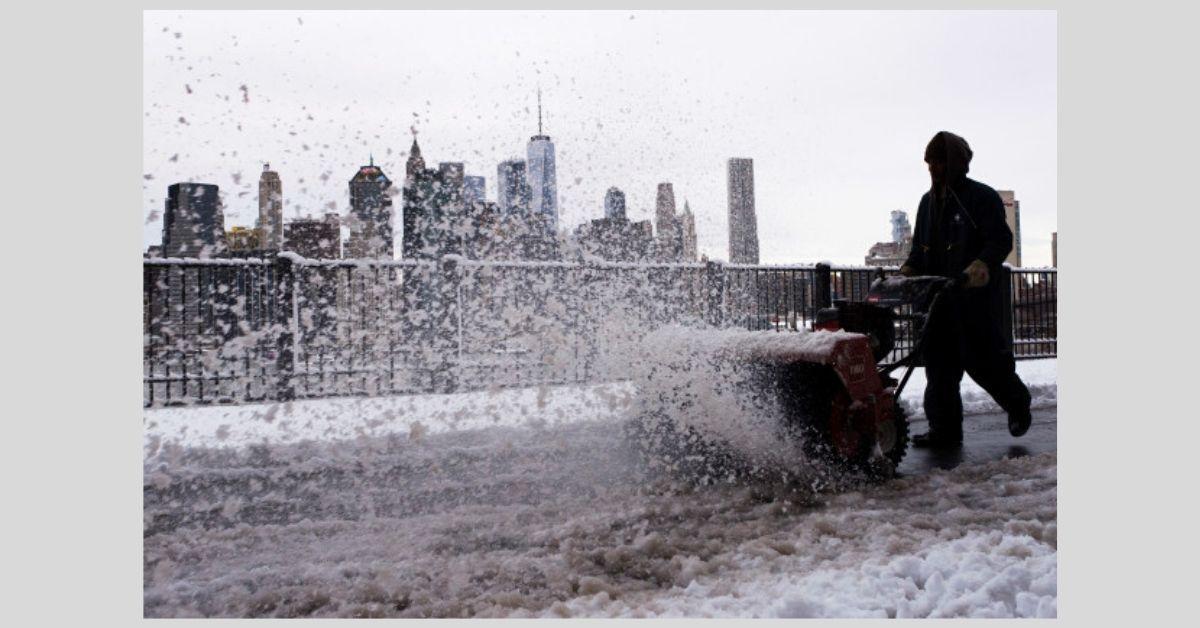 Even though spring is officially underway, the odds are increasing for a spring snowstorm across the interior Northeast during the first part of the coming week.

Millions of Americans might think the idea of winter weather is just a joke given the snow drought that parts of the Northeast have experienced this year. However, there's even a chance, if a storm materializes, that some cities could end up with more snow during spring than the entire winter season.

"The old man may be serious this time with accumulating snow likely, mainly over interior locations, just when millions may have thought that spring had a stranglehold on the region," AccuWeather Senior Meteorologist Brett Anderson said.

The setup is likely to unfold as a double-barreled storm system taking aim at the region, according to AccuWeather forecasters.

The first storm will travel from the lower Mississippi Valley on Sunday to the eastern part of the Ohio Valley on Monday. However, a second storm is forecast to develop along the North Carolina coast during Monday and travel northeastward, just off the mid-Atlantic and New England coasts from late Monday to Tuesday morning.

Just enough cold air is expected to linger from this weekend to allow the primary form of precipitation to occur in the form of snow from the mountains of West Virginia and northwestern Virginia to central New England.

"The heaviest accumulations with this upcoming spring snowstorm will likely be in the higher elevations above 2,000 feet. This includes the Catskills, Berkshires, southern Green Mountains and White Mountains, where some spots may see a foot or more," Anderson said.

"It felt like mid-to late-May on Friday," AccuWeather Chief Broadcast meteorologist said of the warm air enveloping the Northeast. "Believe you me, it's going to feel more like winter as we get into Sunday."

A general 3-6 inches of snow is forecast from the mountains of northern West Virginia to central Maine and northern Connecticut. Lesser snow is anticipated over the valley locations in this swath, on the order of 1-3 inches.

An AccuWeather Local StormMax™ of 16 inches is forecast over the highest terrain.

The majority of the snow is forecast to fall on non-paved and elevated surfaces such as grassy and forested areas as well as car tops and decks. But, for a time, the snow will likely come down hard enough to create slippery and slushy conditions on roads, especially over the higher elevations. Rayno said he thinks the best chance for accumulation to occur will be during the nighttime hours.

Bridges and overpasses may be especially slick anywhere the snow falls after dark and into the first few hours of daylight. Areas most likely to become slippery the fastest would patches that do not receive direct sunlight, such as the north side of buildings and gaps in the mountains.

"The worst driving conditions across interior Pennsylvania, including sections of I-80 and I-70 will be later Sunday night and through Monday morning when the sun is not a factor and temperatures are near or below freezing," Anderson said.

The I-95 corridor from Washington D.C., to Philadelphia, New York City, and Boston should have just wet roads through this, even though wet snow mixing in during the height of the storm or near its conclusion is possible over the coastal mid-Atlantic and likely in southeastern New England.

"You look at Boston," Rayno said, "I think it [the snow] will be just off to the west and north." He didn't rule out the possibility of some wet snow mixing with rain in Boston resulting in "an inch or two" of accumulation.

"The Massachusetts Turnpike could be a real mess the way things look now from Monday night to the start of the day Tuesday," AccuWeather Senior Meteorologist Joe Lundberg said.

There is a remote chance that the coastal storm could strengthen and track in such a way as to bring a period of heavy snow to the I-95 mid-Atlantic and southern New England areas.

"The chance of accumulating snow around New York City and Philadelphia is probably on the order of 10%," AccuWeather Meteorologist Dean DeVore said.

If the coastal storm remains weak or does not hug the coast, then light, non-accumulating snow or even rain may fall throughout the Northeast.

"At least for those over the interior Northeast, it is not quite time yet to put away the shovels and snowblowers," Anderson said. "Despite that spring will have officially gotten underway, it is still March and March has offered plenty of winter storms in the past."

There have been accumulating snow events in New York City well into April, for example. A storm on April 7, 2003, brought several inches of snow to the New York City area.

Accumulating snow on roads has occurred during the middle of March in the Big Apple as recently as 2018.