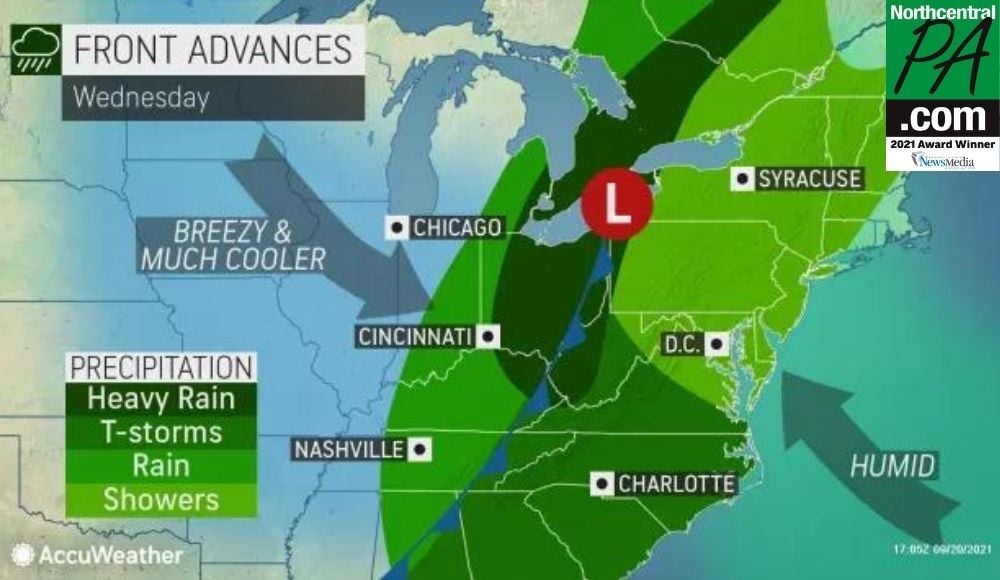 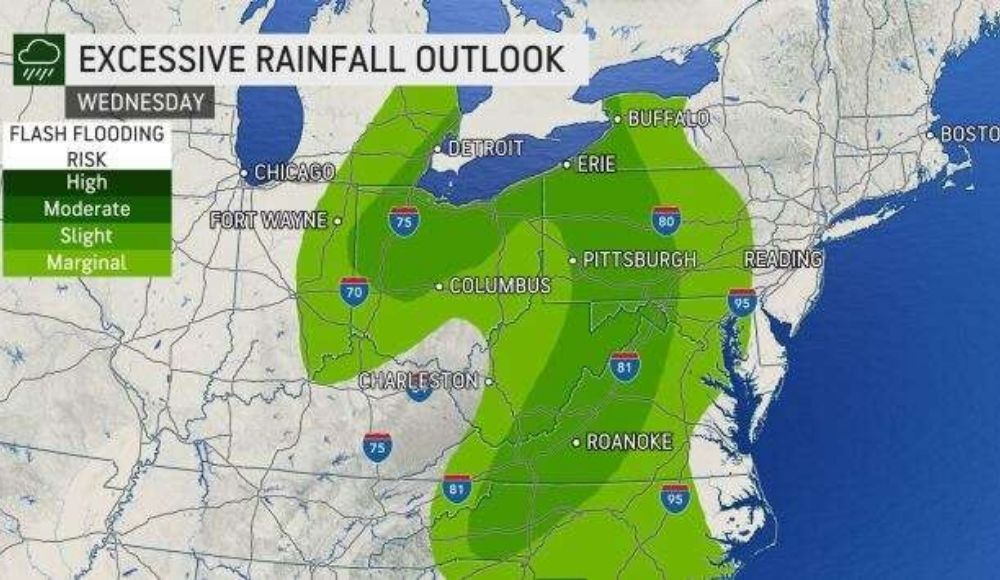 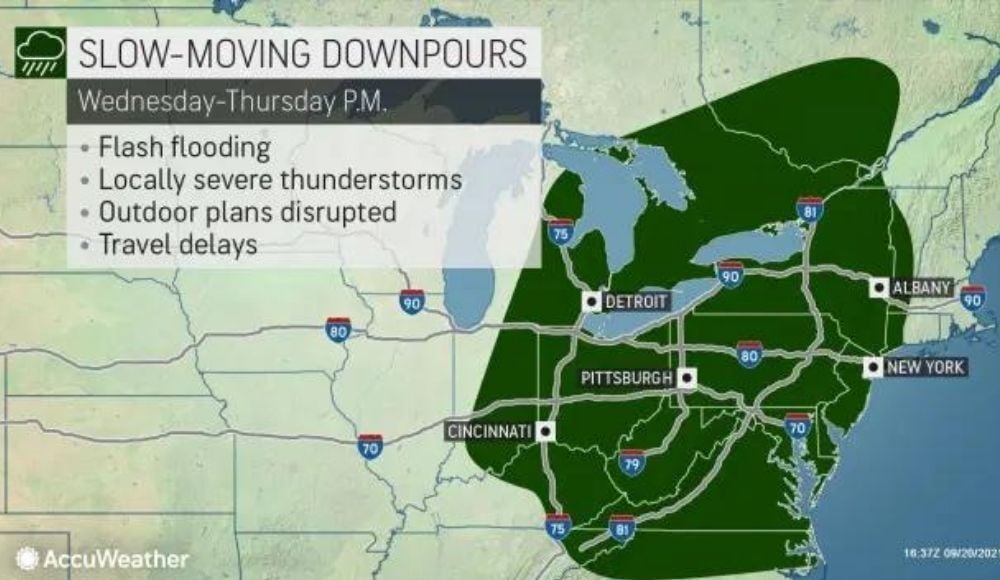 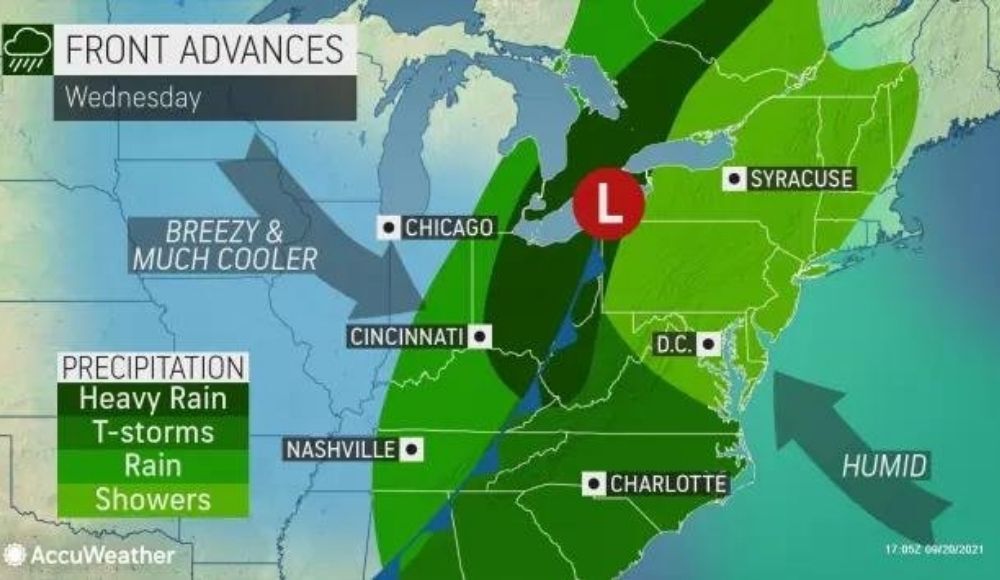 AccuWeather forecasters are warning that a "firehose effect" could unfold and produce 1-2 inches of rain per hour for several areas from Wednesday to Thursday.

After a tumultuous start to the month following the devastating effects of Tropical Rainstorm Ida, a more tranquil weather pattern took hold of the Northeast during the middle of September. However, AccuWeather forecasters say that periods of steady rain and thunderstorms will renew the risk for flash flooding through the latter part of the week.

A cold front that was near Chicago and St. Louis Tuesday morning will move eastward through the week. However, the front will be very slow in its trek, and the rain associated with the front will pose problems farther to the east starting at midweek.

"The risk of flooding will increase through the day on Wednesday and will persist into Thursday as an area of low pressure develops," said AccuWeather Meteorologist Matt Benz.

In addition to the developing low pressure causing the front to slow down, an area of high pressure off the East Coast will create a bit of an atmospheric roadblock. This will cause the rain to last longer in any one location, further enhancing the flood threat. Both the duration and intensity of the rain will be factors for any potential flooding.

"Plenty of deep, tropical moisture will get ingested northward along the cold front where rainfall rates can be enhanced with any embedded thunderstorms," Benz added.

"As the front slows, heavy rain associated with it can pivot over portions of Ohio, Michigan, Indiana, Pennsylvania, western New York state, West Virginia, western Virginia and western Maryland," AccuWeather Senior Meteorologist Alex Sosnowski said. Some areas could be under a zone of heavy rain for an extended period,

"A 'firehose effect' can occur which means rain may pour down at the rate of 1-2 inches per hour or more for several hours," Sosnowski added.

This effect is most likely to occur Wednesday from southeastern Michigan and eastern Indiana to western Pennsylvania, and over the central Appalachians during Wednesday night.

Rainfall of this magnitude is not only likely to trigger rapid flooding in urban areas, but very fast rises in water levels can occur along small streams and some of the rivers in the region.

"The steep terrain in the Alleghenies intertwined with communities along streams in western Pennsylvania, West Virginia and western New York will be at a heightened risk for dangerous flash flooding in this situation," Sosnowski said.

Given the slow nature of the front, it will likely take until Thursday for the heaviest rain to reach the East Coast. The greatest risk for heavy rain will be Thursday in New York City, Philadelphia, Baltimore and Washington, D.C.

"Because of low evaporation rates in September, compared to the middle of the summer, the ground has remained moist in the wake of Ida in areas farther to the east," Sosnowski said.

For this reason and due to a large number of paved surfaces farther east in the mid-Atlantic region, enough rain can pour down fast enough to trigger flash flooding Thursday.

Although a few showers or some drizzle can develop farther east Thursday, it won't be until Friday that the front crawls into New England and reaches cities such as Portland, Maine, and Boston. The rain can even linger into at least early Saturday in New England before the front finally moves offshore.

This second system will reinforce the cool air that the will be ushered in by the first front. With fall officially arriving Wednesday, Mother Nature will be adhering to the calendar.