On November 18, 2019, the Senate voted 38 to 11 to send Senate Bill 147 (Laughlin-R-Erie) allowing hunting on three Sundays a year to the Governor for his action.

The bill authorizes one day of Sunday hunting in deer rifle season, one Sunday during deer archery season, and one other Sunday of the Game Commission’s choosing.

The bill wipes away what the PA Federation of Sportsmen and Conservationists said was a 337-year old “blue” law prohibiting Sunday hunting to help Pennsylvania catch up with modern-day wildlife management.

[Blue laws were a series of state laws adopted over the decades to prohibit a wide variety of commercial activities on Sunday, including closing food and department stores. Most have since been repealed.]

“Today was a historic vote. We are now just one step away from increasing recreational opportunities for the thousands of Pennsylvania sportsmen and women who enjoy hunting,” said Sen. Dan Laughlin (R-Erie), prime sponsor of the bill and Majority Chair of the Senate Game & Fisheries Committee. “This has been a long time in coming and is truly a tribute to the thousands of hunters and the many organizations who have supported this effort.”

“This bill is a result of collaborative effort of the major stakeholders that had an interest Sunday hunting. And will not only create opportunities for hunters- men and women, young and old to get out into Pennsylvania’s great outdoors,” said Sen. Jim  Brewster (D-Allegheny), Minority Chair of the Committee and prime cosponsor of the bill. “Also, it will generate additional revenue that we can hopefully use to solve CWD [chronic wasting disease], which is fatal to deer and elk.”

“Weekends are the only free time for many hunters,” Sen. Laughlin said. “Those two days are essentially the only time that most working men and women can get out into the woods. The same could be said for many young people, the ones who represent the future of the sport. Lifting the ban will give them increased opportunities to pursue the activity that they love.” 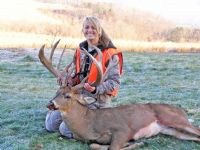 No word yet on whether the Senate will take up the other long-standing wildlife issue-- allowing the Game and Fish and Boat Commissions to set their own licensing fees.

This issue is squarely in the Senate’s court.

The Pennsylvania Wilds is known for quiet. Residents worry fighter jet training will disturb the silence.