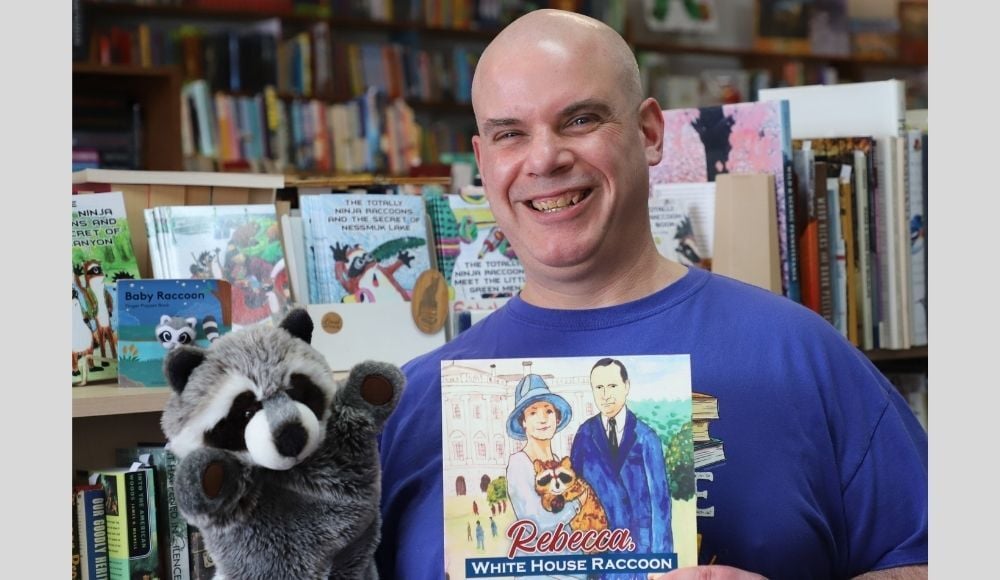 Author Kevin Coolidge is all smiles as he holds a copy of his newest nonfiction picture book for children 5 to 8 years old, Rebecca, White House Raccoon and a raccoon puppet, both available at his bookstore, From My Shelf Books & Gifts, in Wellsboro. 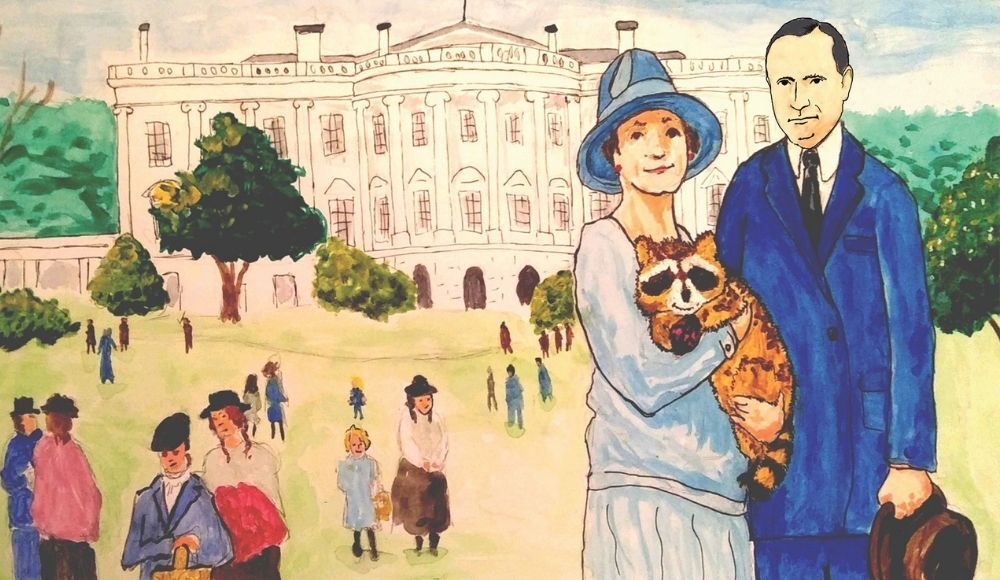 Wellsboro, Pa. – Rebecca, White House Raccoon, a nonfiction picture book for children, is now available for purchase wherever books are sold - including From My Shelf Books & Gifts and kevincoolidge.org, both owned by the book's author, Kevin Coolidge. The book tells the true story of Rebecca, a raccoon kept as a pet by President Calvin Coolidge and First Lady Grace Coolidge.

"Everything in it is true, even about Rebecca going on vacation with the President and First Lady in South Dakota," said Coolidge, who also authored the Totally Ninja Raccoons children's book series.

The book is intended for children aged 5 to 8, but Coolidge believes that older kids and adults who love history, animals, or both will enjoy it, too. The picture book includes colorful illustrations by Chris Jones under the pen name Jubal Lee. Jones also creates the illustrations for the Totally Ninja Raccoons series.

While the Totally Ninja Raccoons series is full of fantasy elements and mythical creatures including the elusive Bigfoot, the ninth book in the series remains a work in progress.

"I'm still working on the next book in the series. It has been harder to write fiction now than nonfiction with the pandemic and everything else that is going on,” explained Coolidge.

Coolidge also answered two of his most frequently asked questions:

About Rebecca the Raccoon

Rebecca was the most famous raccoon to grace the White House. A supporter who thought she would be great to eat for Thanksgiving dinner gave her as a gift to President Coolidge. Instead of eating her, the Coolidges adopted Rebecca and gave her a collar imprinted with the words "White House Raccoon." Her diet included shrimp and persimmons, but eggs were her favorite food.

Allowed to roam freely in the White House, Rebecca often visited the Oval Office and would play with White House visitors. She loved hide-and-seek and the bathtub. Mischievous and intelligent, she was known to unscrew light bulbs, open cabinets, and unpot houseplants. She attended White House events such as the annual White House Egg Roll, where she chased eggs across the lawn. A special wooden house was built just for her.

When the Coolidges left the White House, so did Rebecca. So she wouldn't be lonely, she went to live with other raccoons at the Rock Creek Zoo in Washington, D.C.

Kevin Coolidge is available for school presentations for kindergarteners to fourth graders. He discusses the writing process and encourages fun in literacy.

UPMC listed among the world's 135 most ethical companies