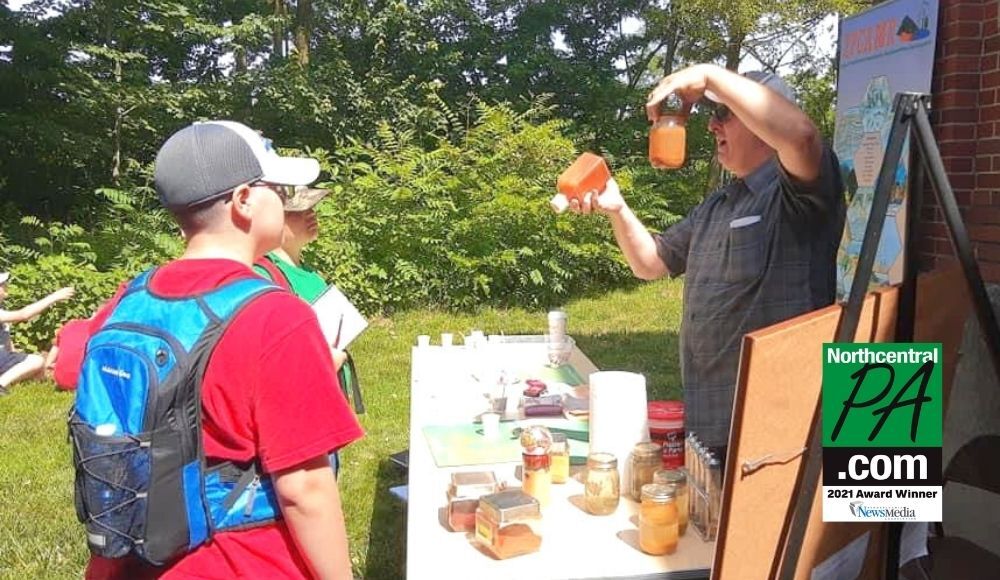 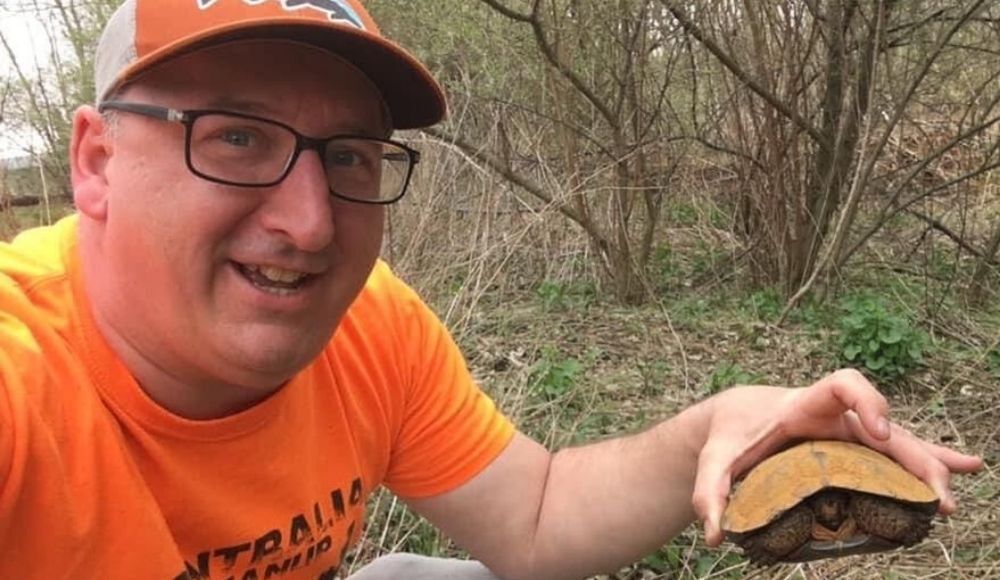 Bobby Hughes, of EPCAMR, holds up a wood turtle while sampling the Espy Run AMD Treatment System in the Nanticoke Creek Watershed. 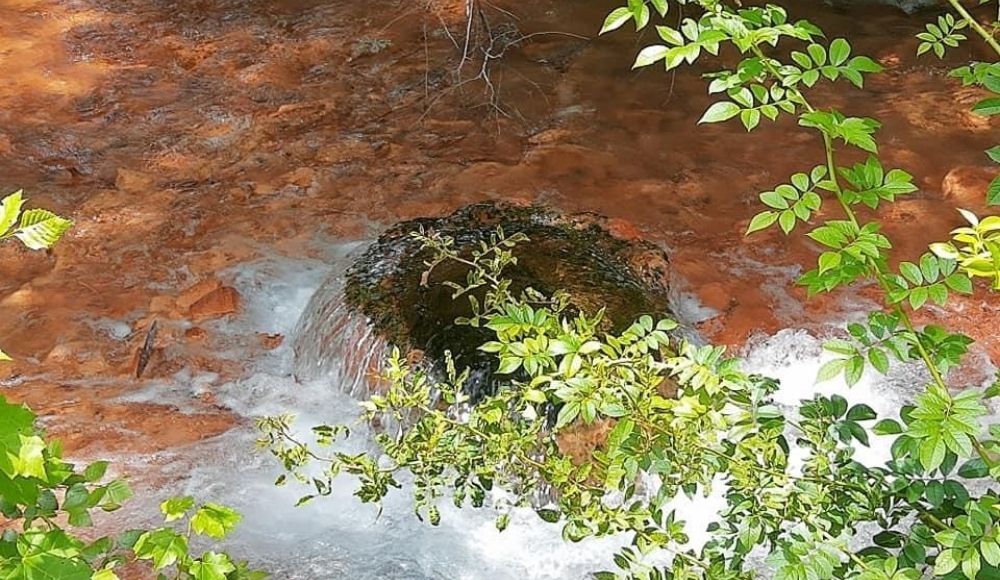 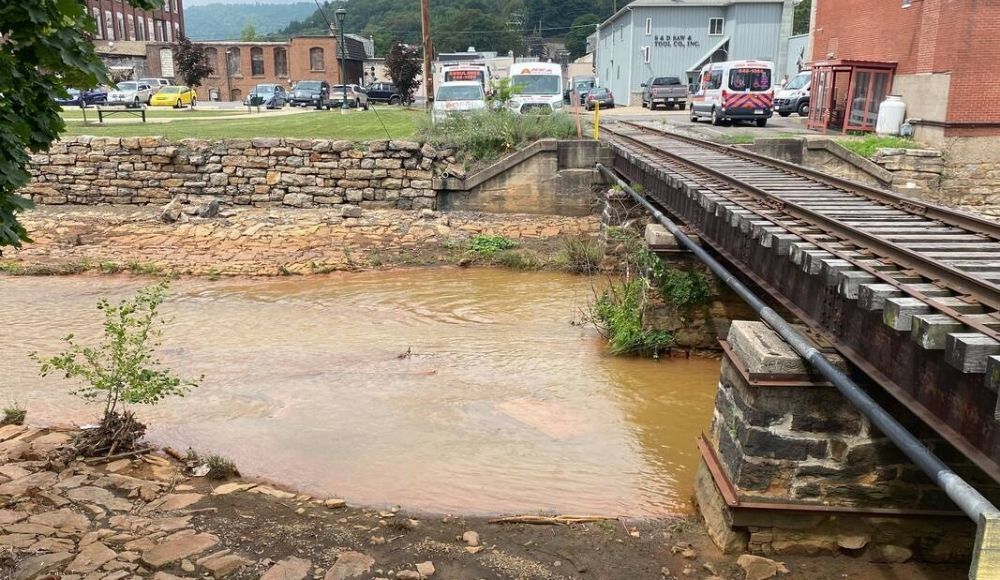 The Shamokin Creek, polluted and impaired by abandoned mine drainage contaminants, flows through the city of Shamokin. 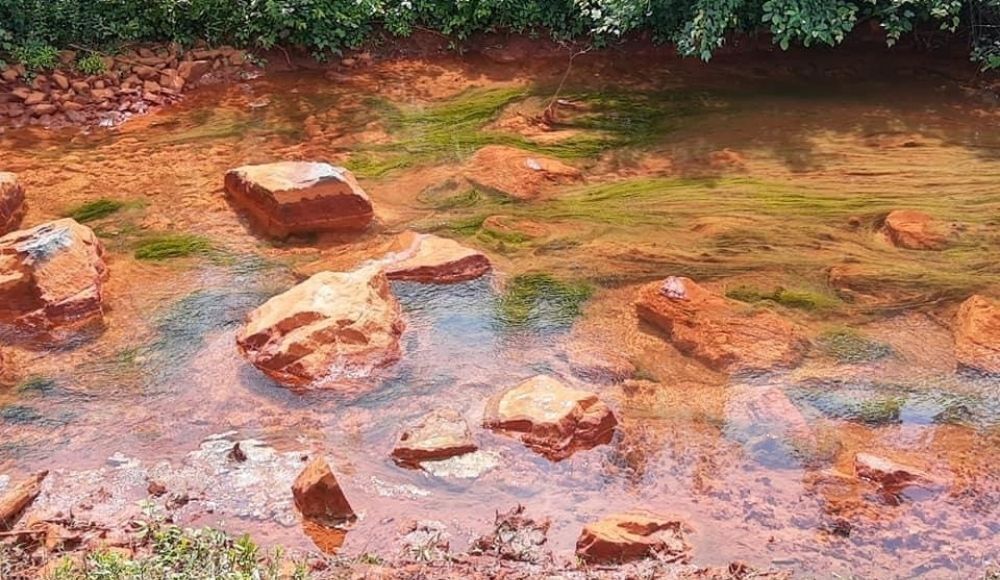 The Nanticoke Creek, in Luzerne County, flows orange with AMD before it reaches the Maelstrom Oxidizer AMD Treatment System downstream. 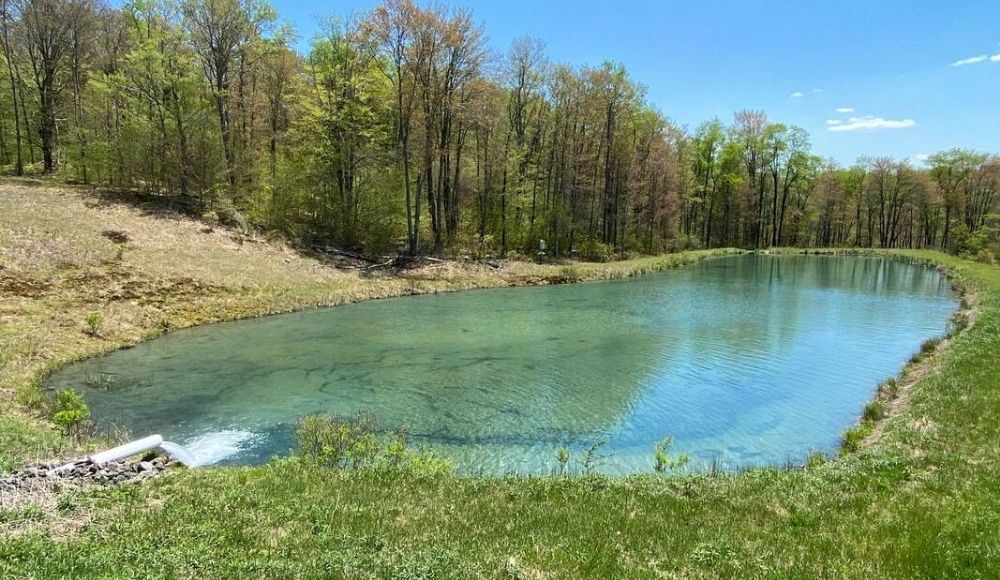 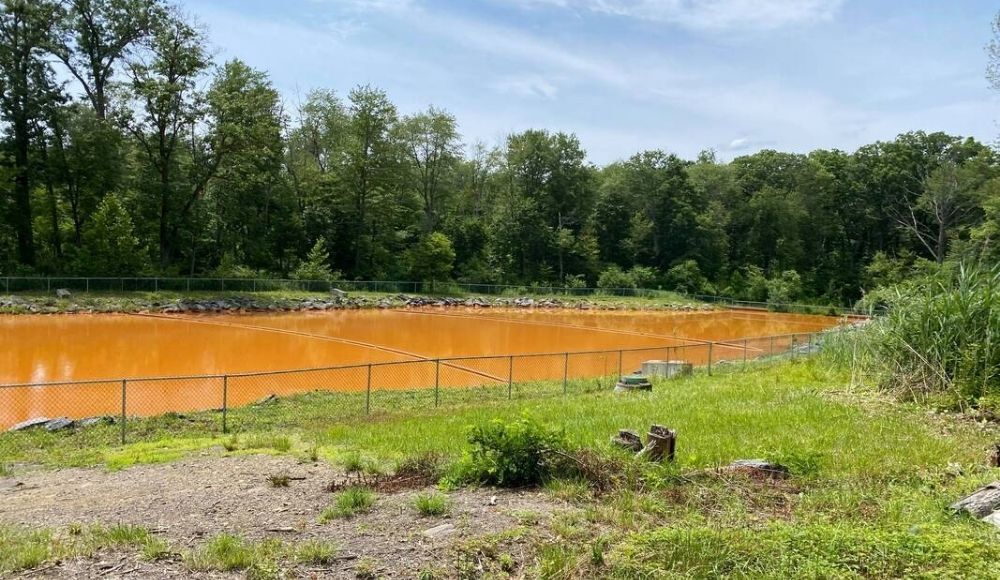 Two creeks flow steadily toward the North Branch of the Susquehanna River in the same general region of Northeast Pennsylvania.

One is stained such a bright shade of orange that it can be seen via the Google Earth mapping system. The other is an inviting crystal clear – with no visible unnatural coloration – mirroring what you’d expect in a glass of water you’re about to drink.

Yet, both waterways have elevated acidity loads, lack typical diversity of aquatic life and suffer from being victims of abandoned mine drainage issues – which impact 5,500 miles of documented streams in the state, and many more still to be recorded.

“Looks can be deceiving,” said Bobby Hughes, executive director of the Eastern Pennsylvania Coalition for Abandoned Mine Reclamation (EPCAMR). “You don’t always have water that looks excessively orange or yellow or red. Until you can test the water for pH and dissolved compounds – such as iron and aluminum – you really can’t know for sure.”

Solomon’s Creek, in Luzerne County, is an 8.8-mile tributary impacted by high levels of acidity and iron, among other elements.

“Solomon's Creek receives 32 million gallons a day of mine water,” said John Levitsky, water specialist with the Luzerne County Conservation District. “On average, 12 tons of iron and 42 tons of sulfates a day go to the river from two mine discharges.”

Check out this video, compiled in 2012, in which Catawissa Creek Restoration Association President Ed Wytovich provides an overview of AMD issues impacting the Catawissa Creek at that time:

The Catawissa Creek is a 41.8 mile tributary of the Susquehanna River that flows through Luzerne, Schuylkill and Columbia counties. Runoff from abandoned mine tunnels have drastically impacted pH acidity loadings and discharges a dangerously high amount of dissolved aluminum that is detrimental to the aquatic environment within the watershed.

“The dissolved aluminum stays clear at a very low pHs until you get to around 5.5 in pH,” said Hughes. “Some of the tributaries of the creek aren’t impacted by mine drainage, so when those higher pH waters come to the confluence with the lower pH in the Catawissa Creek, then you see aluminum dropping out and leaving a chalky covering on rocks and the streambed.”

Aluminum dropping out of the water is extremely detrimental to fish and other creatures within the aquatic ecosystem.

“We have done electrofishing surveys where we have looked through a fish’s gills and the gill slits, and in areas of higher aluminum, we have been able to take a pencil and pull out the aluminum hydroxide that’s in there coating their gills when they are trying to osmo-regulate the water through their bloodstream to oxygenate their blood,” said Hughes. “It impacts their ability to get the oxygen out of the water that they need, and causes them to get out of there quickly and seek refuge in more suitable water quality and habitat areas of the cleaner feeder tributaries. The aluminum can bio-accumulate in their systems, which obviously isn’t healthy for them to survive and/or thrive in those polluted conditions.”

The middle Susquehanna watershed was home to numerous mining operations, many of which dug deep veins into the valley floors and flanks of the mountain ridges to extract the coal reserves.

“We want people to understand that as clean water naturally comes down a mountainside, it gets to an area where there has been mining, and at that interface on the landscape, water goes into the mines and enters an underground network of mine runoff flowing through the abandoned flooded haulage ways, crosscuts, rooms and rock tunnels,” said Hughes. “People don’t realize the staggering volume of water underground and how connected – or disconnected – these mine pool complexes can be from one area to the next. The extent of where this water is coming from is just vast, and we are doing a lot more work to find out where those pools are located, how we can connect to some of those pools and discharges so we don’t have to propose installing as many treatment plants.”

As the water works its way underground, through layers of coal, pyritic materials and other elements in the geologic rock structures of the Pottsville and Llewellyn formations (coal-bearing), it begins to erode that material, and as the water works its way back to the surface, the dissolved metals and minerals it is carrying interacts with the air and drops out in the conveyances and stream channels causing the AMD pollution to the stream and ecosystems of the Susquehanna River.

“I always tell kids at our environmental education programs that it is like a bike that is left out in a big rain – what happens to the chain on the bike afterward? Automatically, the kids will reply that the chain get rusty,” said Hughes. “That’s the same kind of process going on with the mine drainage in its simplest form. We get all this rust deposited in our streambeds, and it impacts the ecological integrity and stream health within our river systems. With our bikes, it's as simple as a can of WD-40 to remove the rust and start riding again. It's not that easy to treat our polluted waterways in a similar fashion.”

Levitsky admitted that the scope of the abandoned mine drainage issue is enormous.

"We have billions of gallons of mine water under the Wyoming Valley alone, where tons upon tons of Anthracite coal was taken out and now it's all replaced with mine water,” he said.

Thankfully, there are groups such as EPCAMR with decades of experience in addressing these issues, improving awareness within the public and securing funds to develop some passive and active treatment systems.

“EPCAMR provides a boots-on-the-ground approach to this problem. We are mapping out underground mines, at the surface we are dealing with a whole slew of factors, including floodplain management, aquatic connectivity and other issues as we attempt to create a holistic assessment of the situation,” said Hughes. “We so greatly value the volunteers and partnerships we have created over the years that have helped us make real headway in certain areas.

“My staff is extremely talented, innovative, creative and love interacting with youth and our community leaders and volunteers to build capacity within our past mining impacted watersheds.”

Still, he admitted, the scope of the problem can be overwhelmingly massive – especially in securing the finances needed to address abandoned mine drainage concerns.

“Cost is a major factor because there isn’t enough money in the state or federal government to cover these 5,000-plus discharge locations we have in Pennsylvania unless we bring in private groups that can capitalize in some way in the use of this water in capacities such as geothermal, hydroelectric or turbine power generation,” said Hughes. “Even by recovering the metals as rare earth elements or pigments as a few examples of the recycling and recovery of the metals have shown great potential in Pennsylvania.

“We are trying to stop talking about abandoned mine drainage as a pollutant, and start talking instead about it as a resource.”