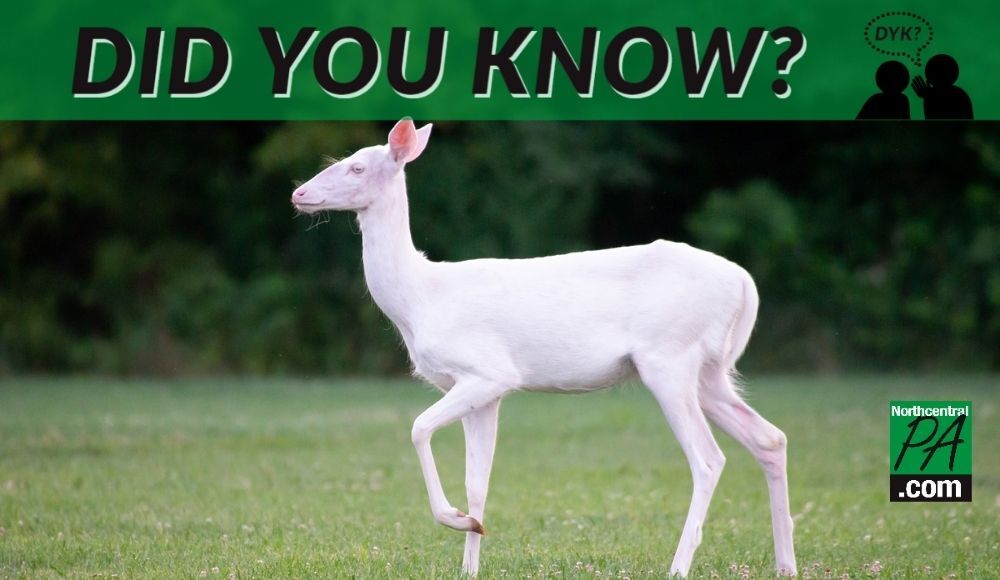 The albino deer gallivanting around a field in Montoursville. Photo by Steve Bagwell. 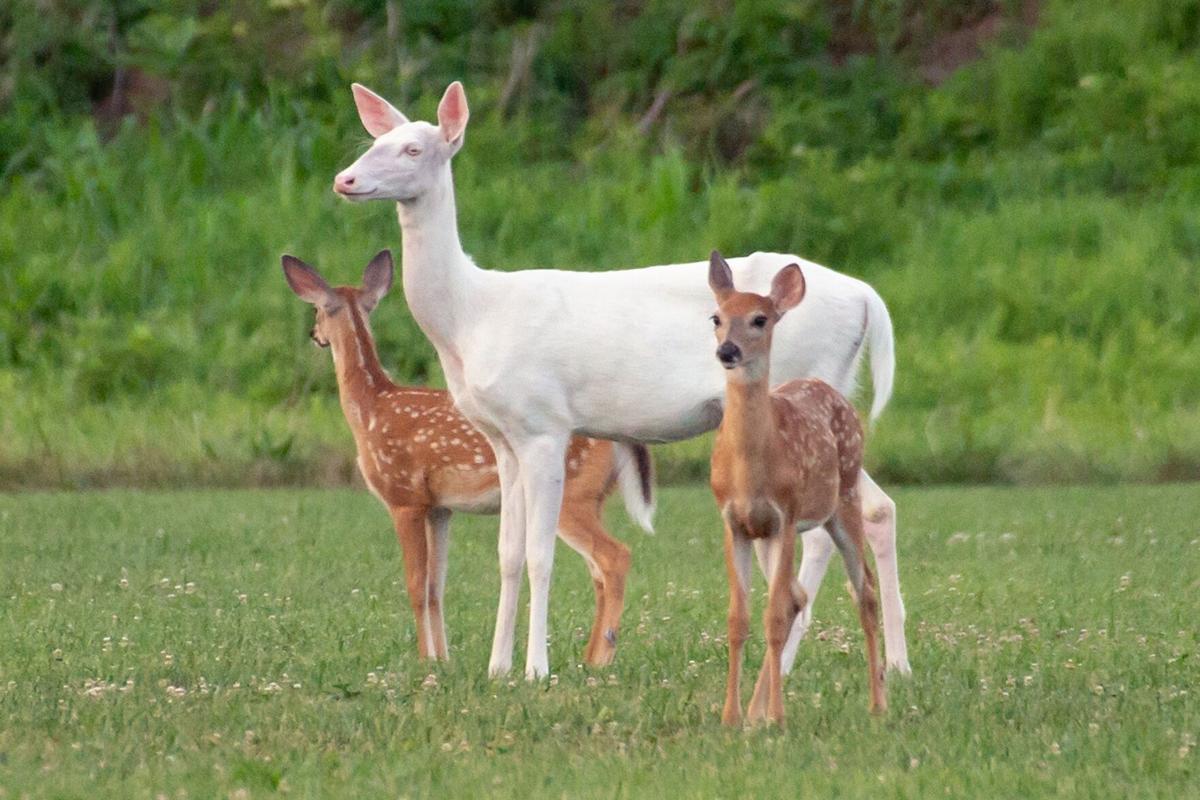 The white deer with two fawns in Montoursville, Pa. Photo by Steve Bagwell. 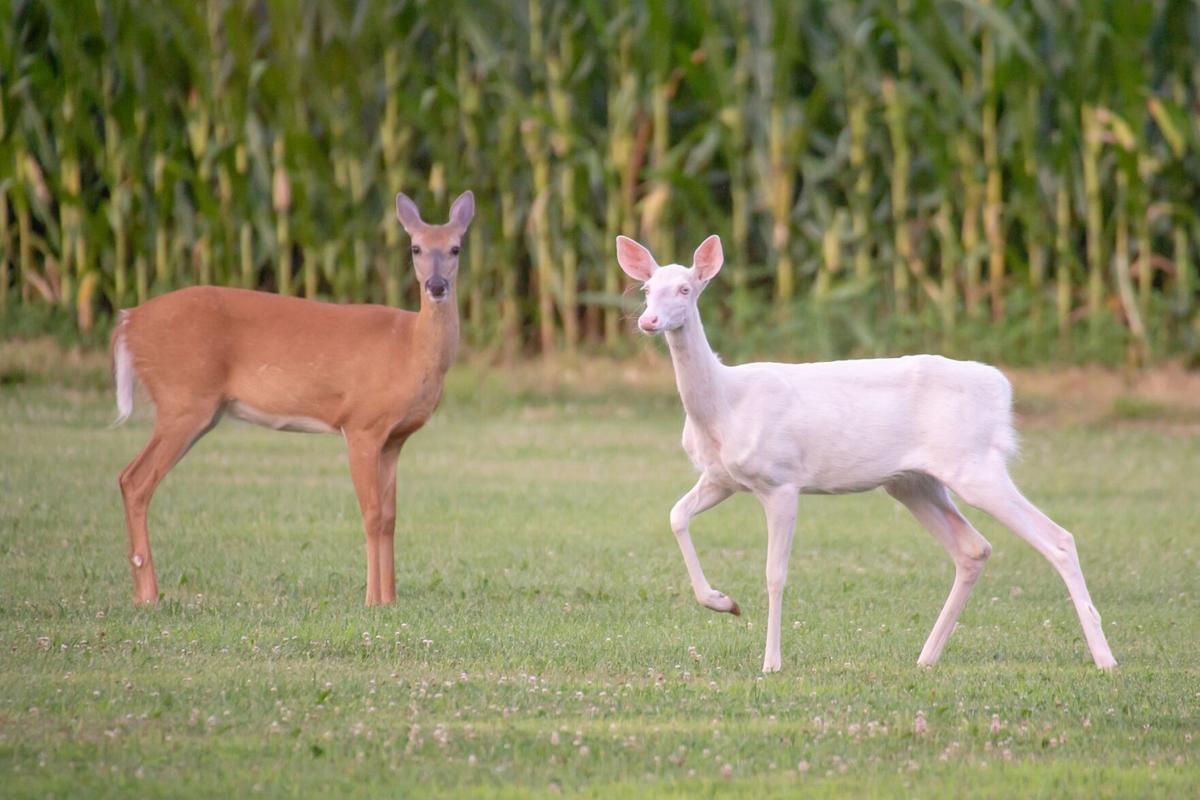 The albino deer next to a brown deer in Montoursville. Photo by Steve Bagwell. 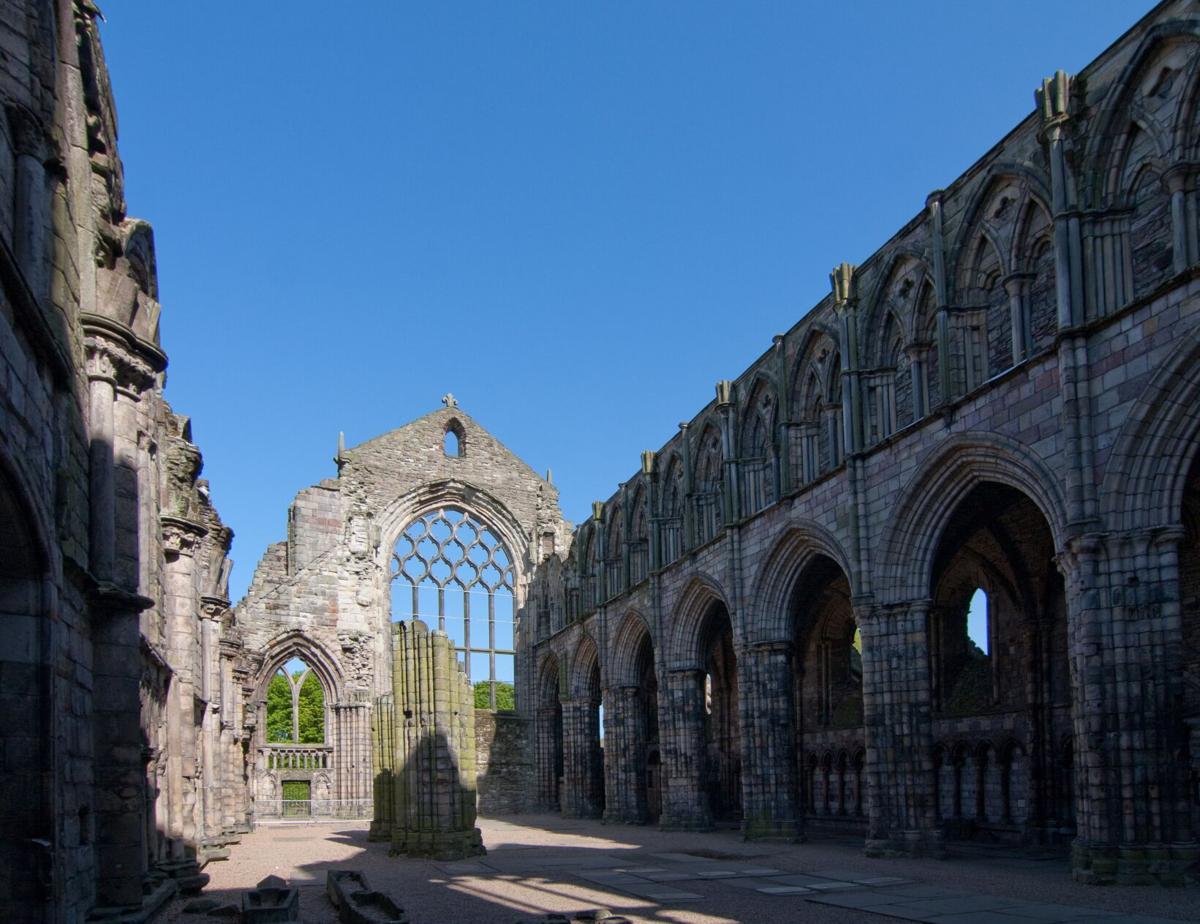 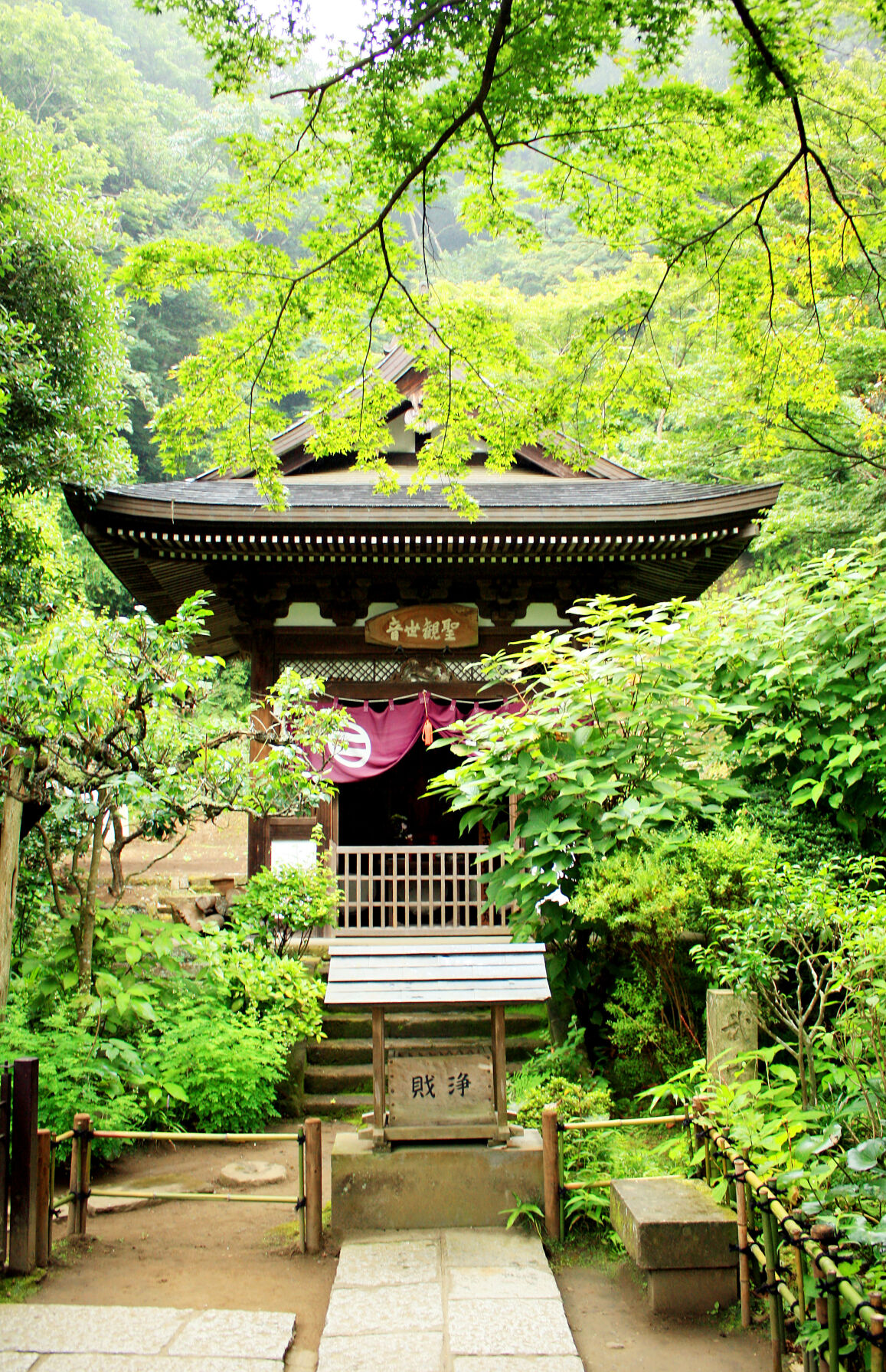 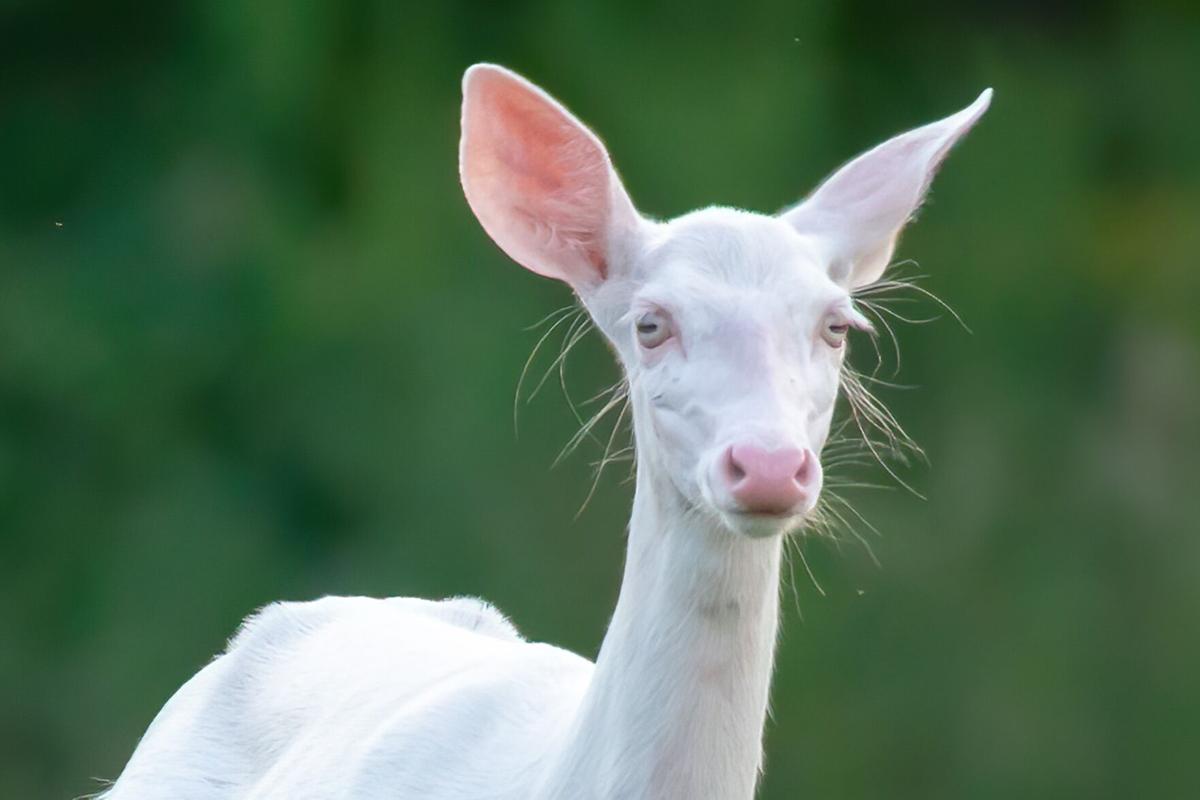 A close-up of the white deer. Photo by Steve Bagwell.

Montoursville, Pa. -- A new resident of Montoursville has become talk of the town this summer. An albino white-tailed deer was first spotted trying to (unsuccessfully) blend-in with Lycoming County’s deer community in June.

Questions regarding the deer’s unique coat and accusations suggesting it was the product of a local stylist who got carried away during the COVID shutdowns, have largely gone unanswered by the deer, so NorthcentralPa decided to set the record straight.

It’s not a bad dye job. The deer’s unique white coat is a rare, natural genetic trait called albinism. Albinism is a recessive trait found in many animals and humans. Albino animals, like the Montoursville deer, inherit the albinism trait from both parents, instead of the gene for normal coloration. Albino animals do not produce color pigments for skin, hair and tissue which is why they appear white.

It’s really, really, rare for a deer to be albino. It’s estimated that only 1 in every 20,000 deer are albino. Sometimes deer can have white patches of fur. These deer, called Piebald, are more common and studies estimate that 1 in every 1,000 deer is Piebald.

White deer have captivated people for centuries. Most myths and legends depict the white deer as something to be respected and impossible to be caught.

Native American tribes believed white deer were sacred and viewed them as spiritual symbols. A Chickasaw legend, “Ghost of the White Deer,” describes the creature as magical. The Seneca, Roanoke, Algonquin, Nanticoke, and Pocomoke tribes all relate sightings of the Great White Deer.

In Japan, there is a legend that white deer emerged from a cave to listen to the founder of the Engakuji Temple give a speech on the day it opened. The temple was founded in 1281 and is a school of the Rinzai sect of Zen Buddhism.

In England, King Arthur is said to have unsuccessfully hunted a white stag for years. This legend helped to turn the animal into a symbol for the one who got away (see also: my ex).

A Scottish myth tells the story of King David I, who was kicked off his horse and charged by a white stag or “hart,” as they used to be called. The King held the stag’s antlers, asked God for help, and animal’s antlers are said to have transformed into a large cross. King David is said to have founded Holyrood Abbey at that very site in 1128.

Even in modern times, white deer become important symbols that are revered and protected by local communities.

In 2012, the killing of an albino stag sparked uproar in Leland, WI. The stag was part of a small population of white deer in the area which were treasured by the locals. The town’s residents had agreed not to hunt any of the white deer. After a hunter from out-of-town shot the white stag, which was the third member of the Leland white deer herd to be killed, an organization called Protect the White Deer was formed to ensure the safety and preservation of the rare animals.

In Montoursville, residents seem to have grown fond of their new neighbor. Sightings of the albino deer have become a source of excitement for children and adults, alike.

Witches and rows on the Susquehanna River Sunday