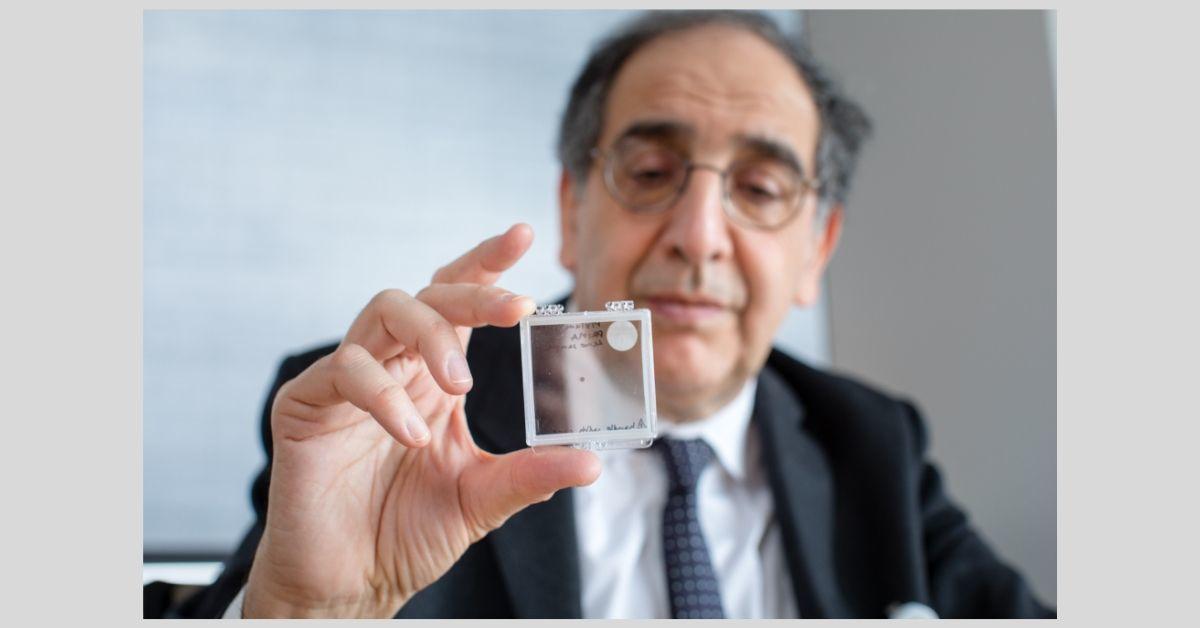 Jose Alain Sahel, M.D, holding a plastic case containing the PRIMA implant. The little grey dot in the center of the plastic case is the implant itself. Source: UPMC 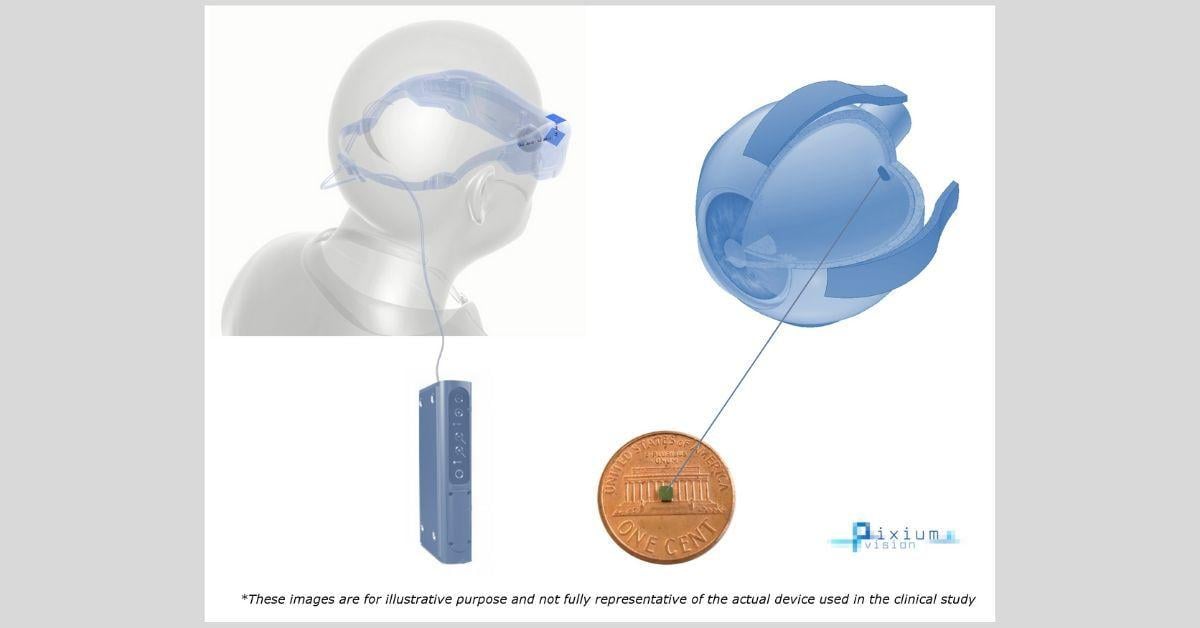 A graphical representation of the PRIMA system, showing the size of the implant compared to a penny. Source: Pixium Vision 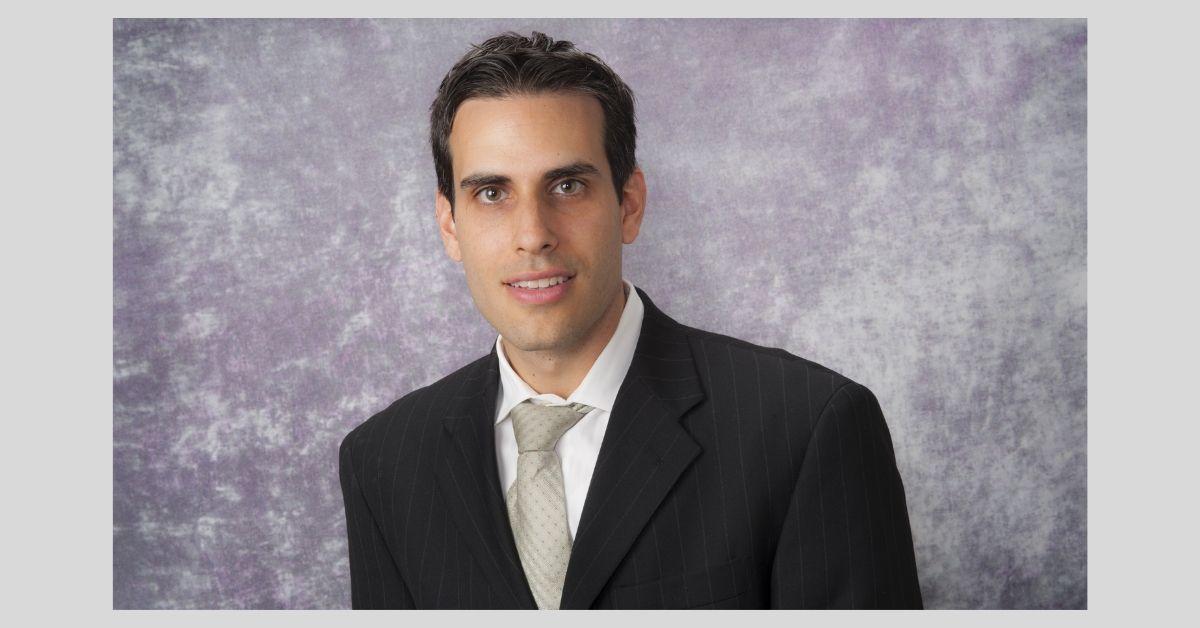 Joseph Martel M.D., the implanting surgeon at the UPMC Eye Center and the Pitt School of Medicine. Source: UPMC

As part of a clinical trial aimed at restoring partial sight to patients with advanced age-related macular degeneration (AMD), a disease which causes permanent blindness, UPMC has implanted the first patient in the United States with a new wireless retinal device called PRIMA. The device is also being tested in France.

AMD is the leading cause of blindness in people aged 50 or older, and developing treatments is considered especially urgent due to a significant aging population in the United States.

"Vision research has advanced dramatically in the recent past and UPMC is at the forefront of this revolution. This is the first of many such breakthroughs led by UPMC and Pitt that will benefit patients with vision loss in our community and around the world,” said José-Alain Sahel, M.D., director of the UPMC Eye Center, Eye and Ear Foundation chair of ophthalmology, and distinguished professor at the University of Pittsburgh School of Medicine who initiated the trial at UPMC. “We are proud to be the first center in the United States to test this next generation retinal implant that could help treat an incurable disease like AMD.”

PRIMA is designed to restore sight in patients blinded by retinal degeneration. It consists of a 2x2 millimeter, 30-micron thick miniaturized wireless photovoltaic chip, placed under the damaged retina and works in tandem with augmented reality glasses that have a built-in miniaturized camera and infrared projector.

The chip acts like a tiny artificial retina, made up of 378 tiny electrodes that convert infrared light from the glasses to electrical signals that are carried by the optic nerve to the brain. After receiving the implant, patients undergo an intensive rehabilitation program that trains their brains to understand and interpret the signals from the implant in combination with their remaining natural vision. Compared to earlier-generation implants, PRIMA is wireless and has significantly more electrodes, which allows for the transmission of more visual information.

A short video explanation of the PRIMA system is available here.

"This is an incredibly exciting first for us at UPMC and I’m honored to be a part of it,” said Joseph Martel, M.D., the implanting surgeon at the UPMC Eye Center and the Pitt School of Medicine, and the principal investigator of the trial at UPMC. “I’m grateful to our patients who have volunteered to participate in this trial, without whom this would not be possible.”

In March 2019, UPMC broke ground on the UPMC Vision and Rehabilitation Tower at UPMC Mercy, which will provide advanced specialty clinical care and innovative programs for visually impaired patients once it is completed. It also will be the home for the vision research program at Pitt and UPMC.

The PRIMA implant was invented by Daniel Palanker, Ph.D., professor of ophthalmology at Stanford University, and licensed and developed by Pixium Vision, a spin-off from the Paris Vision Institute. Sahel is a co-founder of Pixium and holds shares in the company.