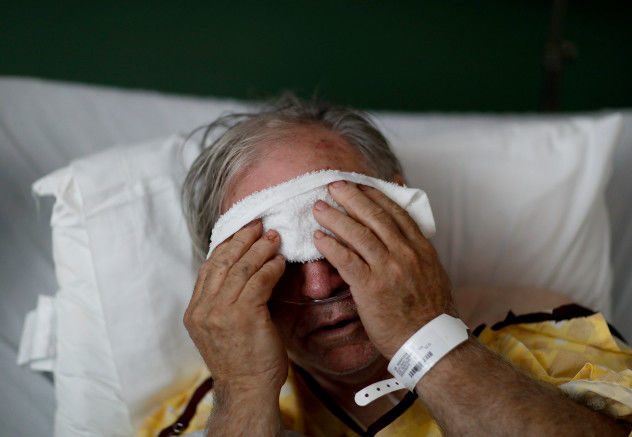 Henry Beverly, 73, places a cold compress on his forehead while battling the flu at Upson Regional Medical Center in Thomaston, Ga., Friday, Feb. 9, 2018. "I believe if I stand up right now I'd just collapse," said Beverly after days of battling the flu. Beverly came to the emergency room earlier in the week and was scheduled to go home after being treated before his symptoms took a quick turn for the worse. "I felt like my body was just going to blow up. A lot of people don't realize what the flu really is. It takes a lot to put me on my feet. I believe I would have died if I went home." AP Photo/David Goldman 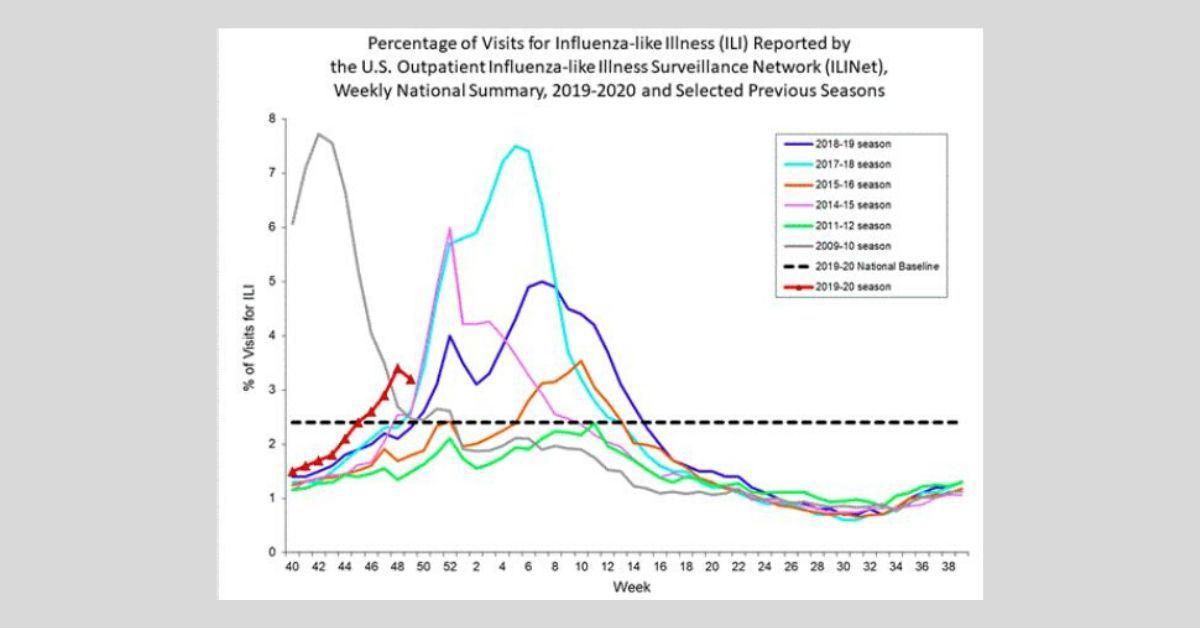 The 2019-20 flu season continues to be more active than normal, with Influenza B the leading type of virus among patients nationwide. But patient visits were down compared to the previous week in much of the country, indicating the early Influenza B wave may reach a peak and start declining in the coming weeks, according to researchers at the Biocomplexity Institute at the University of Virginia who work in a research partnership with AccuWeather.

However, those researchers expect that eventually an Influenza A wave will arrive and cause considerable infections later in the season.

This percentage is down from 3.5 percent last week but still above the national baseline of 2.4 percent for the fifth straight week, according to the CDC.

Last year, levels of ILI in the U.S. were at or above baseline normal for 21 straight weeks, the longest above-baseline flu season since the CDC started keeping such comparable records in 2007-08.

It’s worth noting, though, that there may be updates to the current data subsequently, considering Louisiana, which had “remarkably high influenza activity” the previous week reported no activity this week. Other states with increases in cases last week also showed surprising decreases this week.

“Often the most recent report gets backfilled over the following week, so some of the dips we currently see may be corrected upwards,” said Dr. Bryan Lewis, a professor at the University of Virginia.

Last week, more than half of the states in the nation were at the highest level in the last decade for this time of year. That number fell to 19 states this week, but all regions of the country are in the “very active” transmission phase of the season with rapid growth by the first week in January, noted a report from the University of Virginia researchers partnered with AccuWeather.

“The proportion of Influenza A is increasing but is still in the ‘slow and steady' state, so I don’t think it’s clear that A will begin surging yet,” said Dr. Lewis. “I think these coming weeks will see Influenza B slowing and peaking in the South and growing in the North and then start to slow. I suspect that A will start picking up at the end of December, as it often does.”

Influenza B still causes significant illness in those stricken; however, hospitalizations and death are less frequent than with Influenza A.

If there is a second peak to the 2019-20 flu season later this winter, it would resemble the 2018-19 double-peak season, which saw a small rise in cases early followed by a larger boost later in the season (see chart).