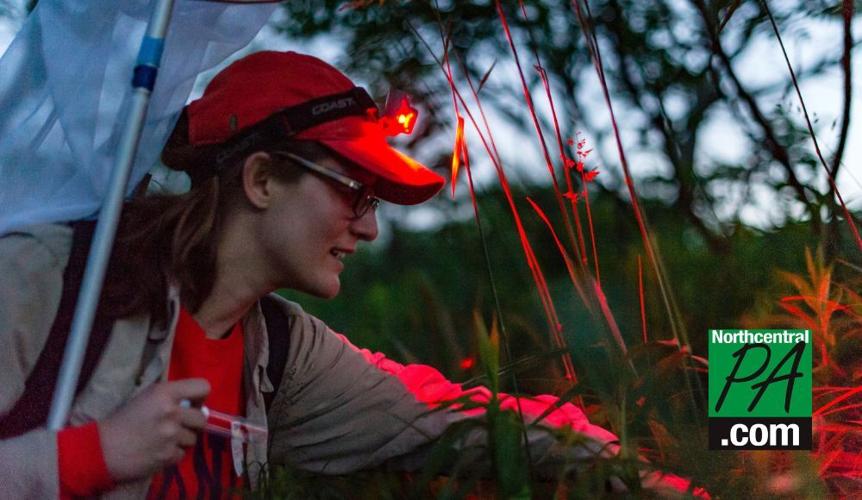 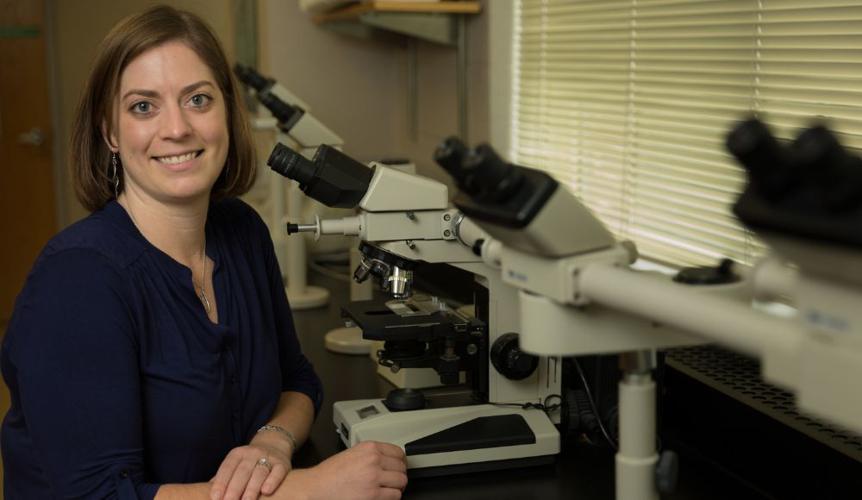 Moria Chambers takes a moment away from a microscope for a photo.

One in three firefly species in North America may be at risk of extinction, according to a study by the Xerces Society for Invertebrate Conservation. One explanation for the decline may be the way fireflies react to common bacterial pathogens found in their environment.

A team of Bucknell University researchers, considered the first to study that interaction, have published a paper on their findings in Ecological Entomology, a journal of the Royal Entomological Society.

Professors Sarah Lower and Moria Chambers, biology, and Professor Owais Gilani, mathematics, teamed up with a trio of biology students to assess how pathogens and environmental characteristics affected survival after infection in a local firefly population.

They compared two groups of fireflies: one healthy and one infected. The researchers injected a group of fireflies with four common bacterial strains found in their native habitat and then compared their response to fireflies injected with a sterile saline solution.

The team found that infection with higher doses of the pathogen Providencia rettgeri — a bacterium commonly found in both water and land environments — had an increased risk of death for fireflies caught later in the season compared to those captured earlier. Seasonality did not significantly impact mortality with any of the other three pathogens they tested.

The results highlight the importance of taking into account the host, pathogen and environmental factors when investigating infection outcomes in wild-caught fireflies.

“We don’t know very much about how fireflies interact with microbes that are associated with them,” Lower says. “They have a long life cycle and spend up to two years as a larvae living in and on top of the soil, which has a ton of microbes. They’re carnivores, so they’re also encountering microbes through their own diet, and what their prey has eaten. And so hopefully, this study can help us learn more about firefly ecology.”

Lower noted the concern that firefly populations are declining and efforts to raise them in captivity have proven challenging for most species. This study should also aid those efforts.

“You can get them to lay eggs in the lab, you can get them to hatch out, but the larvae go downhill from there,” she says. “So trying to figure out more about how fireflies interact with their microbes could be helpful in these captive-rearing experiments.”

The fireflies’ response to the different bacterial strains was also compared with that of fruit flies, which were also injected with the same pathogens to provide comparable data about an insect that is commonly raised in the lab.

“One of the really striking findings, from my perspective as someone who has studied fruit flies for 15 years, is that two of these bacteria are really potent in fruit flies and kill fruit flies at really low doses. However, when we inject fireflies with a much larger dose of the same two pathogens, it’s like they were injected with sterile saline,” Chambers says. “There is not an increase in mortality.”

“That suggests that there’s something about their immune system that is allowing them to survive these infections,” she adds. “They have something that the fruit flies don’t have. There’s something different about the environment in these fireflies.”

The researchers conclude that doing more studies on fireflies might help them learn more about some of the different things that can allow them to fight bacterial pathogens.

This study is part of a bigger project funded by The Pittsburgh Foundation that examines differences across life stages of fireflies.

The researchers are planning to see if their findings extend to other local firefly species that live in the same habitats and how these infections influence energy stores within the firefly by using imaging to measure body condition over time.