Most of us are aware that in 1942 the government seized the town of Alvira and surrounding towns, evicting the residents and bulldozing the farms to build The Pennsylvania Ordinance Works, a TNT manufacturing and storage facility for the war effort.  (You can read more about that here.)

But did you know they also took over the steel plant in Danville, Pa.? Unlike the residents of Alvira however, Danville sought to negotiate with the War Department. The Bethlehem Steel Company had "curtailed activities here within recent months to the inability of obtaining re-rolling rails."  Realizing the need for a new industry, the Chamber of Commerce approached the War Production Board.

In 1942, Danville Structural Steel was owned and operated by Bethlehem Steel.  Built in 1847 as the Rough and Read Mill, it had changed hands many times over the years, before being purchased by Charles Schwab in 1928. Schwab turned the plant over to Bethlehem Steel in 1930 when he became president of the Bethlehem corporation.

Headline in the Danville Morning News, May 8 1942
(It was on March 7, 1942, that the residents of Alvira was told they had six weeks to vacate their property)
An article in the Danville Morning News on May 8, 1942, explained that the U.S. Navy purchased the Bethlehem Steel operations in Danville, and that Rheem Manufacturing would provide the management and labor personnel.
The article stated that approximately 100 men would be employed when the operations began on July 1, with an additional 400 expected to be hired by the end of November 1942.
"Nor will the plan operate as just a war, or emergency industry.  It will be a permanent one, and will continue to operate once the period of the war-time emergency is over," promised Mr Long, who had been appointed as Plant Manager. (The plant closed almost immediately at the end of the war.) 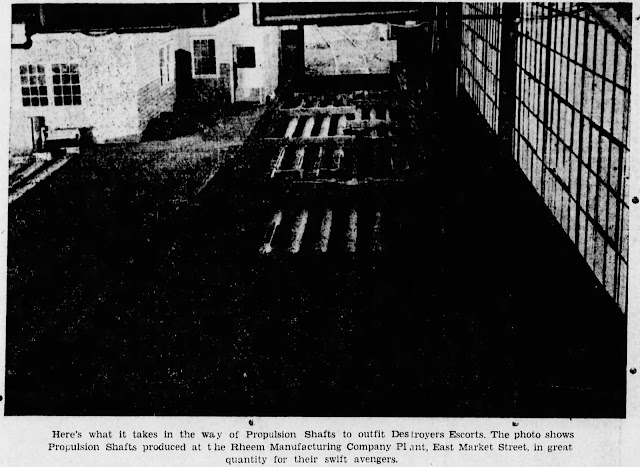 Rheem Manufacturing had plants in Chicago. Illinois; South Gate, California; Newark, New Jersey; New Orleans, Louisiana; Houston, Texas; and Baltimore, Maryland, as well as in Sydney, Australia.
"Participating in an all-out fashion in the battle of war production, the Rheem Company - in its many plants - is making bombs, forgings for shells, depth charges, building ships for Maritime Commission, producing power boxes, and making cartridge cases in large quantities," according to the May article in the Danville Morning News. 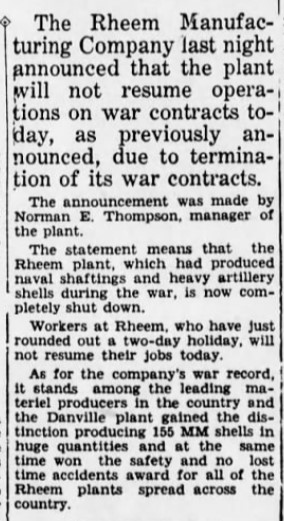