In 1925 Harry Houdini came to Williamsport, not for a show, but to reveal the falseness of another sort of show - Psychics and mediums who claimed to be able to speak with the dead.
"Never in the whole world, has there been found a genuine medium", declared Harry Houdini, famous magician and mystifier, who appeared last evening in the Pine Street Methodist Church (in Williamsport) in the first of the Ministerial lecture and concert course.  He gave a most convincing address and expose of fraudulent spiritualistic phenomena before a capacity audience" - newspaper article recounting Houdini's lecture in Williamsport. 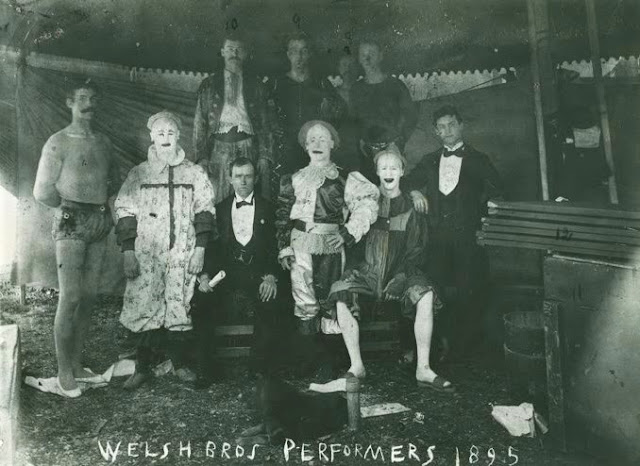 1925 wasn't Harry's first visit to Williamsport, he  (on the far right in the photo above) had been here in 1895 with the Welsh Brothers Circus.  The Welsh Brothers traveled all over Pennsylvania in 1895, and the "Houdini's Cabinet Trick" was soon a leading attraction.
"In 1895 I was engaged by the Welsh Brothers' Circus, a circus which traveled almost exclusively through the State of Pennsylvania, and for the services of Mrs. Houdini and myself I received the sum of £4 weekly, railroad fares and board. - Harry Houdini By Harry Houdini The Magician Annual , 1909-1910, published in London 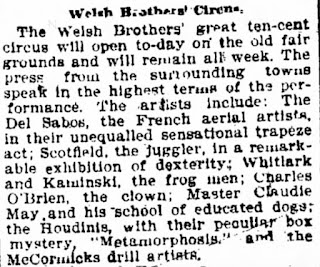 The Williamsport Sun Gazette, July 1st 1895
"By the late 1800’s fairs had been held in two locations in Williamsport; one in the Vallamont section and the other in Memorial Park near the site of Bowman Field Baseball Stadium. "
https://lycomingfair.net/history-of-the-fair/
A Description of the cabinet trick ran in the papers, including this account in the Pottsville Miners Journal - 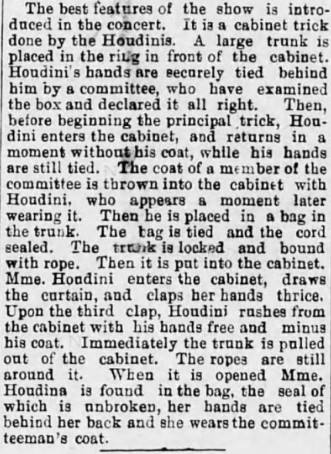 Houdini's Cabinet Trick, as described in
Miners Journal
POTTSVILLE, PENNSYLVANIA
Thursday, June 6, 1895
Houdini went on to become one of the most famous performers of his time, and remains a legend for his magical feats, still today.
Harry  Houdini Begins a Battle With The Spiritualists
In 1913, his mother died.  It was through her death that Houdini  became aware of the spiritualists, and their claims that they could speak with the dead, for a fee.  Outraged by the victimization of the bereaved, Houdini spent the next 13 years in a highly publicized battle with the spiritualists.
"As the world’s greatest trickster and illusionist, Houdini had little patience for anyone who claimed to be in possession of supernatural powers. Beginning in the 1920s, he embarked on a second career as a professional skeptic and debunker of psychics, mind readers, mediums and other “Spiritualists” who purported to be able to contact the deceased. "
https://www.history.com/news/10-things-you-may-not-know-about-harry-houdini
"In 1923, he took time off from his magic act to travel across the country giving lectures against mediums. His book, A Magician Among the Spirits, would be published the following year. Later in 1923, Houdini joined a panel that was put together by Scientific American Magazine, which offered a reward for any medium that could prove their psychic gifts were genuine. Months after joining the committee, Houdini heard the committee had deadlocked over a medium named Mina Crandon. He immediately set out to debunk Crandon by attending one of her séances, at the end of which he is said to have remarked, "I've got her; all fraud." To prove it, Houdini created a special "fraud preventer" cabinet, a crate with a slanted top with openings for the medium's head and arms. The second séance, this time using the cabinet, was not successful and Crandon did not receive the cash prize."
https://www.thegreatharryhoudini.com/occult.html
Houdini's $10,000 Challenge 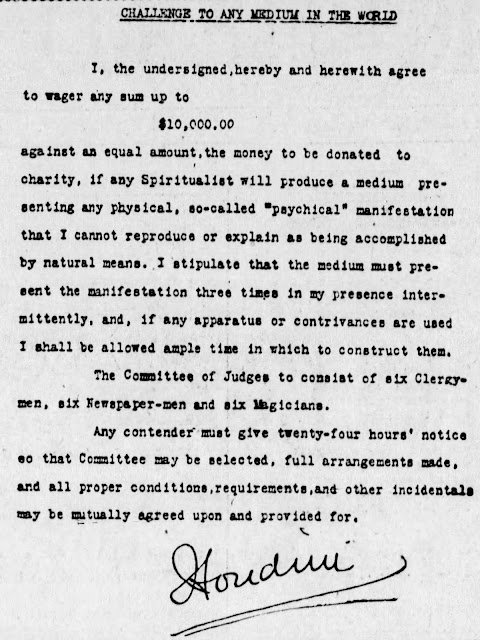 His Lecture At the Pine Street Church In Williamsport Pa
October 9, 1925

Williamsport Sun-Gazette
WILLIAMSPORT, PENNSYLVANIA
Monday, October 9, 1944
At the end of his remarks in Williamsport, Houdini mentioned his visit to the city more than 20 years earlier.  One of the Welsh brothers, whom he had performed with here, said that he had never seen any town change as much as Williamsport.  Houdini said that he, too, "felt that the changes which have effected here since his last visit were unusual.  "
Houdini's first visit would have been during the beginning of the lumber boom - by 1925 when he returned, there would have been a new row of mansions, now referred to as Millionaires Row, which had been built between 1860 and 1920.

View the full article here:
http://houdini.org/wiils200.jpeg
At conclusion of Houdini's lecture, which included slides and a variety of simple knot tricks, and other tricks that may have been used by spiritualists.
He then took questions from the audience, and a local man, later identified as Frederick Steck, claimed to be able to speak with the dead.
"It was while he was trying to explain certain phenomena to Williamsport people that an extremely amusing and at the same time ludicrous  attempt was made by a local man, who claims to be in touch with the "spirits" every evening, and it is understood, gives seances in some rooms in Market Square.
When Houdini asked for the man's name, he appeared to dodge the issue and claimed he was really in touch with departed people.  Houdini said he was not, that no person could be, to which the local man replied "Oh I ain't?  Well, you don't know who I am."
Finally the man's name was revealed by himself as Frederick E. Steck, and with Houdini endeavoring to remain his courteous self under extremely trying conditions, a rapid fire of conversation was carried on between the man who has studied magic and spiritualism under the worlds greatest teachers, who has appeared before crowned heads in every country of the globe, and a man who locally claims to be legitimately in conversation with the spirits"
The end of the article is cut off, and I cannot find the original version, but it appears that Houdini reminded the man of his $10,000 challenge, and we know that challenge was never completed by anyone.