Home
News
Calendar
Community
Life
Politics
Sports
Features
Business
Education
Obits
Jobs
"We Three Kings," originally known as "The Kings Of Orient," was written by John Henry Hopkins for a Christmas pageant to be held in New York. He then took the carol home to Vermont with him that Christmas, where friends and family performed it in their annual dramatization of the Christmas Story. He then published it in his book 'Carols, Hymns & Songs' in 1863. In 1928 it was published in the Oxford book of carols, where it was referred to as "one of the most successful of modern composed carols." "The composer of the beloved song "We Three Kings", John Henry Hopkins Jr., was rector at Christ Church Williamsport from 1876-1887. During his tenure at Christ Church, he baptized 1,100 people and prepared 546 for confirmation."
John Henry Hopkins, Jr. (1820-1891), was born in Pittsburgh, Pennsylvania. After working at a newspaper in New York City, he went on to study law at the University of Vermont.  Like his father, he left the study of law and entered the clergy, graduating in 1850 from the Theological Seminary in New York City. Hopkins then became the first church music instructor at General Theological Seminary and was the founding editor of the Church Journal (1853-1868).

Through these positions he became recognized as a leading Episcopal church musician. Following his ordination in 1872, Hopkins served as rector of two parishes: Trinity Church in Plattsburg, New York (1872-1876) and Christ Church in Williamsport, Pennsylvania (1876-1887).

Rev. Hopkins wrote the hymn, “We Three Kings”  in 1857, for an elaborate Christmas pageant that was presented at the Seminary in New York that Christmas. Hopkins traveled from New York to Vermont every Christmas, where his father, John H. Hopkins. Sr., was the long time Episcopal Bishop for the State of Vermont.

It is thought that Hopkins, a bachelor, wrote the carol with his nephews in mind, as the Hopkins family performed a dramatization of Matthew chapter 2, and the entire Christmas Story, every year. "We Three Kings" was sung by the family for the next two years, and was so popular with family and friends that by 1863 it had been published by Rev. Hopkins in his first collection of “Carols, Hymns, and Songs.” (See the entire book online here)

"We Three Kings" was the first Christmas Carol written in the United States to be included in the book "Christmas Carols Old and New," a prestigious and influential book of carols published in the UK.  In 1916 the carol was printed in the hymnal for the Episcopal church. We Three Kings was also included in the "Oxford Book of Carols" published in 1928, which praised the song as "one of the most successful of modern composed carols."

“Because the wealth of USA Appalachian and other folk carols was yet to be discovered, this carol for almost a century was regarded by hymnal editors as the sole USA contribution to the repertory of English language carols,” wrote hymnal editor Carlton R. Young.

Hopkins also wrote the lesser-known carol, "Gather Around The Christmas Tree." His other publications include "Canticles Noted with Accompanying Harmonies" (1866) and "Poems by the Wayside" (1883), as well as a biography of his father, John Henry Hopkins Sr.

Hopkins delivered the eulogy at the funeral of President Ulysses S Grant in 1885. 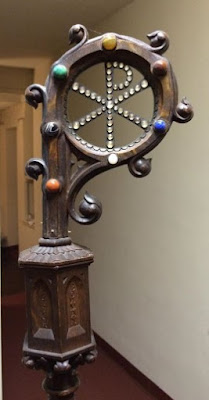 This Crozier, at the Christ Episcopal Church In Williamsport, is reported to have been designed by John Henry Hopkins while he was a rector here.