Home
News
Calendar
Community
Life
Politics
Sports
Features
Business
Education
Obits
Jobs
H. Beam Piper - The Science Fiction Author Who Created the Cannon Tradition At Lycoming College Football Games.
A folklorist and friend of Henry Shoemaker, Pipers first published Science Fiction story took place in Williamsport Pa. He went on to write stories that were sold to Walt Disney, and reportedly inspired George Lucas' Ewoks.  During his lifetime, his work was met with mixed reviews.  After his death, his work developed a cult following.
An antique weapons expert, with a large collection  of his own, he was brought in by Lycoming College to help clean and identify the guns donated from the Grand Army Of the Republic Hall.  In the collection was a cannon... and the rest is Lycoming College history.  (Be sure to scroll down and read John Hunlingers account of the cannon being fired for the first time - it is hysterical)

"The Spark grew brighter. He was more than a something that merely knew that it existed. He was a man, and he had a name, and a military rank, and memories. Memories of the searing blue-green flash, and of what he had been doing outside the shelter the moment before, and memories of the month-long siege, and of the retreat from the north, and memories of the days before the War, back to the time when he had been little Allan Hartley, a schoolboy, the son of a successful lawyer, in Williamsport, Pennsylvania."
- Time & Time Again By H. Beam Piper
Listen To A Radio Dramatization Of The Story Here:
https://archive.org/details/OTRR_X_Minus_One_Singles/XMinusOne56-01-11033TimeAndTimeAgain.mp3#
(It's only a few minutes long)
Read a More Detailed Account Of The Life & Works Of H. Beam Piper Below. 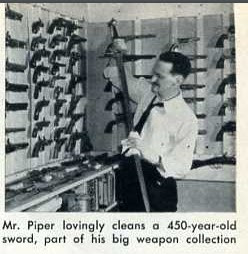 His collection of more than 100 antique and modern weapons, ranging "from a 450-year old French sword and a 400-year old Spanish poiniard with a gold inlaid blade. to a small brass cannon once mounted on a pioneer Is blockhouse during the Indian fighting and a nine-millimeter pistol of the type used by German SS troops in World War II" formed the background of his non- science fiction mystery, "Murder in the Gunroom".  He posed with his collection for a newspaper article.

"Beam started doing volunteer work at the Museum after the Grand Army of the Republic Hall moved a bunch of material to Lycoming College. The college didn't know what to make of the stuff, so they looked for an expert in old guns, and somebody said, "Hey, how about Beam Piper?"

So Beam was helping clean and identify the guns. In the collection, they came across a sentry cannon, circa 1850, and while they were cleaning it up Beam got a gleam in his eye and said, "You know, there's no reason this couldn't be fired."

John wasn't certain. The sentry cannon was a cast-iron gun and he wasn't sure it would take a charge of gunpowder. Not that this mattered one whit to Beam, the elder statesman and authority, so they got some black powder and took the cannon outside. They loaded the cannon up, using Kleenex for wadding, and then nervously looked at each other as they realized that now one of them had to actually light the damn thing. The prospect of an unfortunate explosion had them scared sh**less.

And up strode Beam Piper, gleefully, match in hand...

After that, he became the designated cannon-firer at home games when the Lycoming College team scored a touchdown." 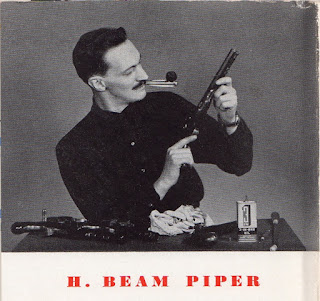 Photo from the dust jacked of Murder In The Gunroom by H. Beam Piper

His first published story appeared in the 1947 issue of Astounding Science Fiction. He went on to write some of science fictions "most popular and beloved stories", and many believe his Little Fuzzy series inspired the Ewoks of Star Wars. He also wrote Lord Kalvan, Otherwhen, Space Viking, and a series of Paratime Police Stories, among many others.

During his lifetime, his writing received mixed reviews and received no awards.  After his death, he would gain a great cult following.

In 2011, author John Scalzi wrote Fuzzy Nation, which he described as "a twist on an older Sci-Fi Classic, Little Fuzzy by H. Beam Piper. Scalzi says he kept fans of the original work and the Piper estate at the forefront of his mind when selling Fuzzy Nation. "I'm also raising the profile of H. Beam Piper.  Here is somebody who was a pretty influential figure in science fiction in his time, why don't you check out some of the other stuff he did?"

H. Beam Piper Planned To Write A Triology On The Fair Play Men

"I received Otzinachson....  and I am delighted with it.  I'd say off hand, that it is worth all that I am going to pay for it ($15) both as a history of the valley in which I spent some of the happiest days of my life, and as a source of information and material for my projected series of three novels dealing with the Fair Play Men.  As to the latter, I think it will serve as the foundation, to which I will build up my other research into old records, oral traditions, and such."  Read  Otzinachson,  A History Of The West Branch Valley by Megginess here

Piper wrote  "Rebel Raider", the story of John S Moby, The Confederate Guerilla, of which Walt Disney purchased the rights.

"Why Walt Disney bought the movie rights to that article, I've never figured out," Piper remarked. "Will Colonel Mosby be played by Mickey Mouse, and General Phil Sheridan by Donald Duck? It's baffling. However, I was glad to get the check."

Very much later, the background material in the article was incorporated into Disney's "Willie and the Yank," a Roger Mobley vehicle.

Pipers Fuzzies are said to have inspired the Ewoks in Star Wars.

"Who's Got The Fuzzies?

The Fuzzies are little golden-furred creatures who predated George Lucas' cuddly ewoks by two decades when they first appeared in H. Beam Pipers fantaty novel "Little Fuzzy". Poper, whose book and it's sequel enjoyed great success along the lines of JRR Tolkiens "Lord Of The Rings" series, told friends jsut before he died in 1963 that he had completed a third book but no one could ever find it.  That is, until Pipers friend Michael Knerr began working on a biography of the author and came across a carbon of the third book hidden away in a trunk of junk.  The found treasure, called "Fuzzies And Other People" will be published in August by Ace Science Fiction & Fantasty books, continuing the intelligent fuzzballs adventures in the untamed forests of Zarathustra." 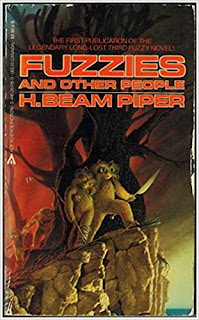 https://amzn.to/2XEZ6wq
Fuzzies And Other People was indeed published in 1984 (written in 1955).  But if Piper ever saw "success along the lines of J.R.R. Tolkien", it was certainly not during his life time.  He had been surviving on pigeons he shot, before committing suicide in 1964.
As for Michael Knerrs Biography of Piper, John F. Carr writes:
" Mike discovered the “lost” Fuzzy novel (Fuzzies and Other People) in one of the trunks that he’d taken from Piper’s apartment mislabeled in a box as “second pages.” In lieu of payment (Ace Books offered him several thousand dollars — Mike called it “blood money”) for the “lost” Fuzzy book — Mike stuck a deal whereby he would write a biography of Beam based on his first-hand knowledge and Piper’s diaries which ran from 1955 to his death. Ace agreed and he sat down and over the next several years wrote the book Piper. Unfortunately, when he turned the book in Ace reneged and told him they were no longer interested. He was about to destroy it when I called to obtain his permission to quote his letters for the article, “The Last Cavalier: H. Beam Piper,” I was writing for Analog Science Fiction–Fact magazine.   Mike was mad as hell, and I managed to calm him down a bit and told him it would be a crime if he destroyed Beam’s legacy in a fit of pique, since he had the only copy of the diaries. Instead, I suggested that he send me a copy of his Piper biography for safe keeping. You could have knocked me over with a paper clip when three months later it arrived in my P.O. Box! He sent me the original manuscript; I know that because it was backed with several other manuscripts (a lot of old timers did this to save on paper). I am certain that I have the only copy in existence…" http://mysteryfile.com/blog/?p=138
John F. Carr went on to write and publish a biography of Piper.