In March of 1865, the Civil War was coming to an end, and the men from the Susquehanna Valley were beginning to journey home at last. And then, the spring thaw was met with spring rains, and every major river in Pennsylvania flooded, destroying homes, railroads, bridges, and most of the travel routes, as well as cutting off the mail. 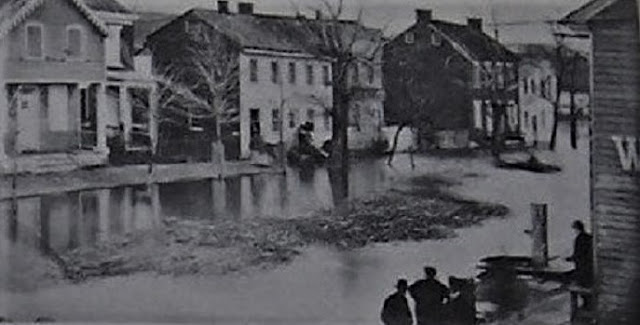 Known as the St. Patrick's Day flood of 1865, it was caused by a heavy winter snowfall, followed by heavy rains. At the time, it was the worst flood the area had seen, with water 3 1/2 feet higher than the flood of 1846.

All of the bridges between Northumberland and Lock Haven, which the townspeople had prepared to burn down if needed to stop troops from invading our area, survived the war only to be swept away in the flood.  Several spans of the Northumberland and Lewisburg bridges were lodged at the Isle Of Que, just above Selinsgrove. 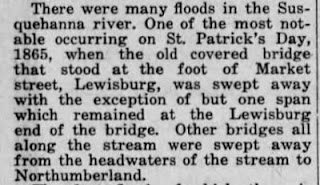 The railroad was severely damaged, and with most of the able bodied men still not home from the war, there was a severe shortage of laborers to make the repairs. The town of Selinsgrove, anxiously awaiting the return of its husbands, fathers, and sons, was without mail communication for more than week. 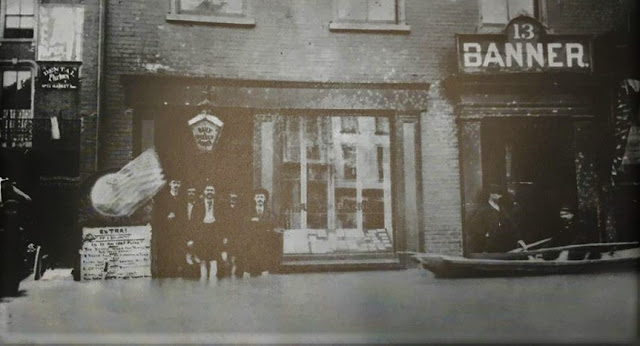 The water covered the entire Isle Of Que, "except for one spot large enough for four mules to stand on." To save the livestock, people brought them into their homes. John Fisher at the ferry had his cow on the porch and his horse in the barroom.

The Star Of The North (Bloomsburg) reported that the whole flat of land laying between Bloomsburg and Fishing Creek was submerged under several feet of water, making it look as if the area was a lake. Not a spot of dry land could be seen on the farms lying between the hills of the mouth of Hemlock Creek and the hills south of the Susquehanna, with the river having spread to nearly two miles in width.

Danville reported that the railroad was submerged and all travel suspended.

All of the large bridges on the west branch of the Susquehanna river between Danville and Williamsport were gone, and the canal was in many places destroyed. Half of Danville was underwater. 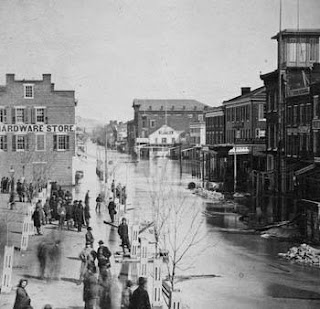 The Lewisburg Chronicle reported, "the loss to lumbermen, farmers, railroad and bridge companies, and all of those whose property was inundated is almost incalculable." The town of Lewisburg however, was relatively untouched by the flood waters. "The loss of property has been immense in all of our neighboring towns, while Lewisburg has escaped with a comparatively small loss. It has however, met with one serious and damaging blow. Our bridge is gone! The noble old structure that has withstood the storms, tempests, and floods of half a century has passed away."

The Susquehanna has flooded 48 times since we began keeping records in 1786, and the flood of 1865 remains in the top 10 of the rivers worst floods. 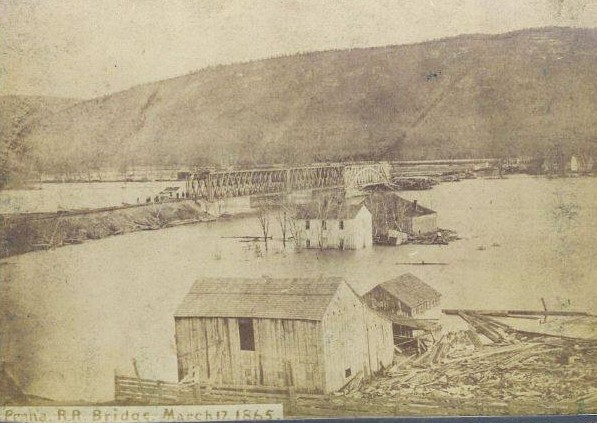 The Selinsgrove Tribune, March 1865
Find this article and more on Valley Girl Views