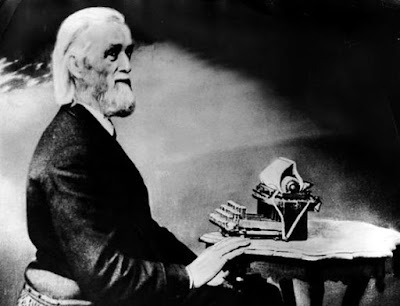 The first practical, commercial use type writing  device was invented by Christopher Latham Sholes, native of Mooresburg Pa.  His version also first introduced the QWERTY keyboard layout that is standard on all devices today, created to separate common letter combinations so that the bars would not stick together and jam as frequently when using his device. 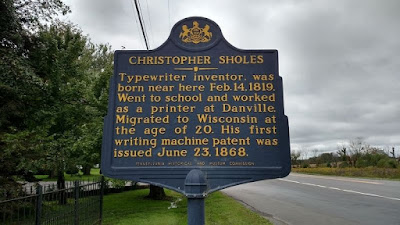 A marker near the Mooresburg one room school house reads:
Christopher Sholes, Typewriter Inventor
Was born near here Feb. 14 1819
Went to school and worked as a printer in Danville;
Migrated to Wisconsin at the age of 20
His first writing machine patent was issues June 23 1868
In 1714, Queen Anne of England granted engineer Henry Mill a patent for "a writing machine for the impression of transcribing letters singly or progressively one after the other".  According to a book on the history of the typewriter by Arthur Toye Foulke, "Between Mill's day and until 1924, no fewer than 315 weird and wonderful, but mostly impractical, writing machines ranging in size from a grand piano to those small enough to slip in a coat pocket were placed in the European and American Markets." 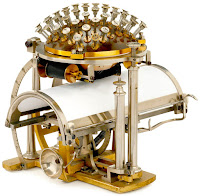 This pincushion like Hansen Writing Ball, invented in 1865 was one of many impractical writing machines predating Sholes typewriter.
Born on February 14th 1819 near Mooresburg Pa, Christopher Latham Sholes was the son of Orin & Catharine (Cook) Sholes.  Cyrus, cabinet maker, and his wife Catherine came to Mooresburg from Connecticut prior to 1819.  They lived in a log home in Mooresburg before moving to Water Street in Danville Pa.

Christopher  did his printing internship at the Danville Intelligencer. That job entailed sorting & arranging the type to be used in the printing, a monotonous job that may have later influenced his invention.  At the age of 18, Christopher went  with his family  to Milwaukee, where he went to work for his brother Charles, publisher of  the newspaper The  Wisconsin Democrat.  From there, he was sent to take charge of the Madison Inquirer, another paper owned by Charles.

"When he was a boy of fourteen he was set to work in a printing office and became the proverbial printers devil.  When he had passed his apprenticeship as devil, he went to work for his brother, a prosperous printer.  From being a printer, Christopher Sholes naturally developed into an editor and writer, and then just as naturally into a politician. " The Buffalo Morning News, November 13 1922

Sholes played a key role in early Wisconsin politics.  He helped organize the "free soil" and republican parties, and served several terms in the Wisconsin state senate. He lead the successful campaign to outlaw the death penalty in the state of Wisconsinn in 1853.  During the civil war, Sholes was appointed as the postmaster of of Milwaukee, and later was the port collector and commissioner of public works.

You can read the entire article here.