Home
News
Calendar
Community
Life
Politics
Sports
Features
Business
Education
Obits
Jobs
Thomas Edison strung a line of electric lights outside of his Menlo Park Labatory in New Jersey in 1880, delighting passengers on passing trains.  Two years later, the Christmas before Edison wired a building in Sunbury with the very first three-wire lighting system, Edison's partner, and former boss, ran a string of red, white, and blue lights around a rotating tree in his parlor window.
He improved on his display each year, and in 1884 the New York Times wrote about his tree, titling the article "A Brilliant Christmas Tree, How An Electrician Amused His Children."
As most homes didn't even have electricity at this time, the lights were more a publicity stunt than an invention for sale.  It would be another 12 years before Grover Cleveland used  electric lights for the first time on the White House christmas tree, and not until 1903 that GE sold a strand of Christmas tree lights that could be installed without the help of an electrician. Even then, the lights were so expensive that some department stores offered the option to rent them. 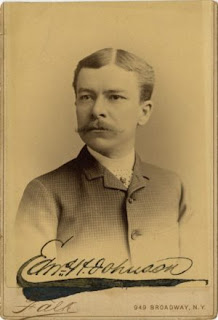 In 1871, Edward Hibberd Johnson hired Thomas Edison, then a 24-year-old inventor, as a consultant for the Automatic Telegraph Company. Johnson wrote of Edison, "he ate at his ate at this desk and slept in a chair. In six weeks he had gone through the books, written a volume of abstracts, and made two thousand experiments...and produced a solution.”

Johnson was so impressed by Edison that when Edison left to form his own company, Johnson went with him. In a role reversal, Edison's boss became his employee, and before long, trusted partner.

When Edison invented the phonograph in 1877, Johnson took it on tour.  When Edison patented the light bulb in 1880, Johnson was one of the first investors to form the Edison Lamp Company. Johnson worked as a vice president of the Edison Electric Light Company, and he was chief engineer for the electric generation system that Edison had unveiled in lower Manhattan that September. 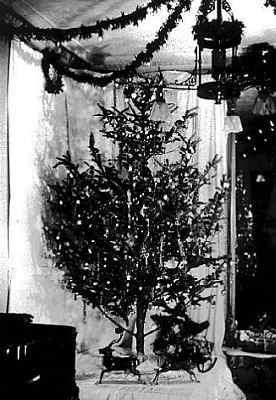 Setting up a tree by the window in his parlor, Johnson hand wired red, white, and blue light bulbs and strung them together around the tree. He placed the trunk on a revolving pedestal, all powered by a generator.

Years of promoting Edison's projects had taught him the value of publicity. As soon as his tree was completed, he called a reporter. W.A. Croffut, a reporter for the Detroit Post and Tribune, who was visiting New York, wrote:

"Last evening I walked over beyond Fifth Avenue and called at the residence of Edward H. Johnson, vice-president of Edison's electric company. There, at the rear of the beautiful parlors, was a large Christmas tree presenting a most picturesque and uncanny aspect. It was brilliantly lighted with many colored globes about as large as an English walnut and was turning some six times a minute on a little pine box. There were eighty lights in all encased in these dainty glass eggs, and about equally divided between white, red and blue. As the tree turned, the colors alternated, all the lamps going out and being relit at every revolution. The result was a continuous twinkling of dancing colors, red, white, blue, white, red, blue---all evening.

"I need not tell you that the scintillating evergreen was a pretty sight---one can hardly imagine anything prettier. The ceiling was crossed obliquely with two wires on which hung 28 more of the tiny lights; and all the lights and the fantastic tree itself with its starry fruit were kept going by the slight electric current brought from the main office on a filmy wire. The tree was kept revolving by a little hidden crank below the floor which was turned by electricity. It was a superb exhibition." ...