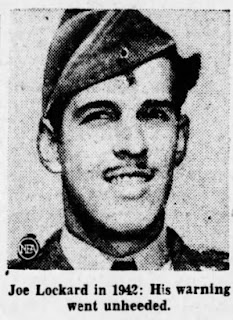 In the early morning hours of December 7, 1942, a man from Williamsport, stationed in Hawaii, spotted a large group of planes on the radar, headed their way. He raised the alarm, but his superior, believing the planes were their own b17s returning from the mainland, told Lockard not to worry about it. Fifty-five minutes later, the Japanese attack on Pearl Harbor began.

While visiting with veterans in nursing homes this week, a veterans wife gave me a history lesson on the civil air corp in Williamsport. And then she threw in, "A Williamsport man was the first to see the planes that bombed Pearl Harbor. But no one listened to him. We called him Pearl Harbor Joe."

Sure enough, a quick search of old newspaper records found dozens of listings for Joe Lockard. An article in the Williamsport paper called him the War's First Hero.  Later newspapers throughout the nation mentioned him as his superiors were investigated for not listening to him. 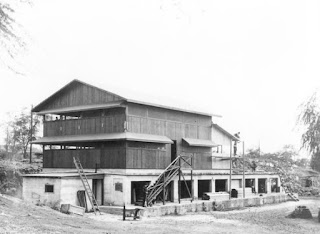 The signal station where Joe Lockard spotted the planes on the radar.

Joe Lockard was working overtime, on his own initiative, on the morning of December 7, 1941. He was the private in charge of the aircraft detector in Hawaii, and when his shift was over that morning, he asked to stay on a bit longer.  He was still learning  the equipment, and he, along with rookie George Elliot, wanted to spend some more time with the radar system. It was in this voluntary overtime that the two spotted what Lockard knew to be a really large group of planes on the radar.

He called his superior but Lieut. Tyler was unconcerned and told him not to worry about it, to go ahead and shut down for the day.

"In those 55 minutes, the whole course of the war in the Pacific could have been changed" the Williamsport newspaper reported.

As to why Lieut. Tyler ignored Lockards warning, Tyler believed what Lockard was seeing were their own B17s coming in from the mainland.

Tyler recalls, "Driving to the information center at Pearl Harbor before that morning I flipped on the local radio station playing Hawaiian Music with no voice interruptions, and recalled that the station served as a homing beacon when flights of B17s were coming in. So when I got the radar report later, I assumed it was those B-17s.  I had no way of knowing these were enemy aircraft."

Lockard and Elliot followed their Liets instructions to shut the tower down, and they headed down the mountain. About halfway to camp they passed the rest of their operating unit, speeding back to Opana, excitedly waving and shouting. "But we couldn't understand what they were saying." said Lockard.  "Then we saw these huge billows of black smoke coming from the harbor."

After Pearl Harbor, Lockard went on to Officer Candidate School of the Signal Corp in NJ, where he got his second Lieutenants bars. 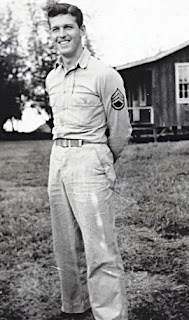 Paul Kearney ended his article with:

"The Placards all say Remember Pearl Harbor. I say, Remember Joe Lockard - and his simple notion that the least he could do for his country was a little more than was expected of him."