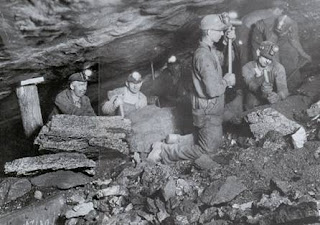 In the 1860s, Lithuania was being heavily persecuted by the Russian empire.  Serfdom had just been abolished, there was a great famine, and the Lithuanian language was banned. Conditions were so poor for Lithuanians, that 10-hour work days in Pennsylvania Coal mines, at 25 cents an hour wages, was far preferable than staying in their homeland. So many Lithuanian men came to central Pa. that it became known as "Little Lithuania," and Pennsylvania is known today as the home of the worlds oldest Lithuanian overseas community.
The Lithuanians had a honey liquer at home, called Krupnikas, that they no longer had access to here in central Pa. So they set about creating their own version, today known as Boilo. Originally Boilo was often made with moonshine, because it was all the miners could afford, and all they really had access to. But Four Queens Whiskey is the alcohol of choice, and what most Boilo makers prefer to use today.
Although Boilo is unique to a handful of Pennsylvania counties, areas where coal was mined by European immigrants more than 100 years ago, a similar drink can be found in the Lithuanian community in Baltimore, where it is called virtaya. 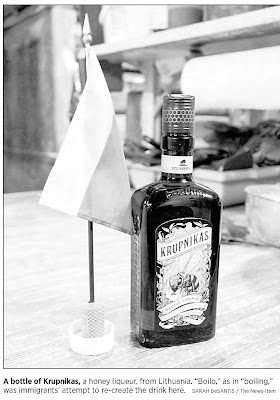 "A bottle of Krupnikas, a honey liquer from Lithuania.  Boilo, as in "boilin" was immigrants attempt to recreate the drink here" - Philadelphia Inquirer, Dec. 2017
Boilo takes about two hours to make, with the fruits and spices being cooked first, strained very thoroughly, then added to honey and grain alcohol.  The boilo can be then be bottled and stored. The drink is warmed up before being served.

Fritz Lynagh, a retired Pottsville police officer, remembers his parents administering small doses of hot boilo as a cold and flu remedy. Sometime in the 1980s, he began makinghis own, basing his technique around a recipe he received from a coworker at the county courthouse.

"His boilo begins with two liters of raspberry ginger ale emptied into a sturdy stock pot, along with staples like honey, raisins, oranges, lemons, cinnamon and cloves, plus some of his own touches: dried mint, pink peppercorns, caraway seed and concentrated OJ. This base simmers for a good half-hour before Lynagh pulls it from the heat, strains out the solids and stirs in his own reserve of Four Queens, plus a glug of Everclear for good measure. He does not boil the alcohol, but some do. He doesn’t add peaches or apples or blueberries or schnapps, either. Newfangled variations are fine, but he likes “the traditional stuff.” 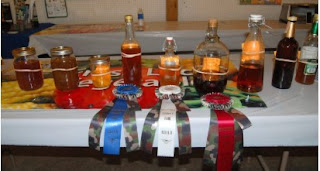 Boilo Varieties  at the Schuylkill Fair
Although  coal country families are proud to share their Boilo throughout the season, they are less likely to share their family recipes. There's a bit of a competition to to have the best boilo, at any gathering.  The base recipe for Boilo however, is easy to find:
Ingredients
4 cups water
4 1/2 pounds clover honey
4 oranges, quartered
3 lemons, quartered
1 cup raisins
6 cinnamon sticks
1 teaspoon caraway seeds
1/2 teaspoon whole allspice berries
1/2 teaspoon whole cloves
1/2 gallon 190 proof grain alcohol

Directions
In a large pot over medium heat, mix the water with honey, and stir to combine. Stir in the orange and lemon quarters, raisins, cinnamon sticks, caraway seeds, allspice berries, and cloves, and bring mixture to a boil. Reduce heat to a simmer, and cook, stirring occasionally, for 30 minutes. Remove from heat, and strain the liquid into a large pot. Allow to cool for a few minutes.

Slowly pour the grain alcohol into the honey mixture, and stir to combine. Pour into bottles, and cap; refrigerate until use. Serve gently warmed in shot glasses.
Read the rest of the article on Valley Girl Views