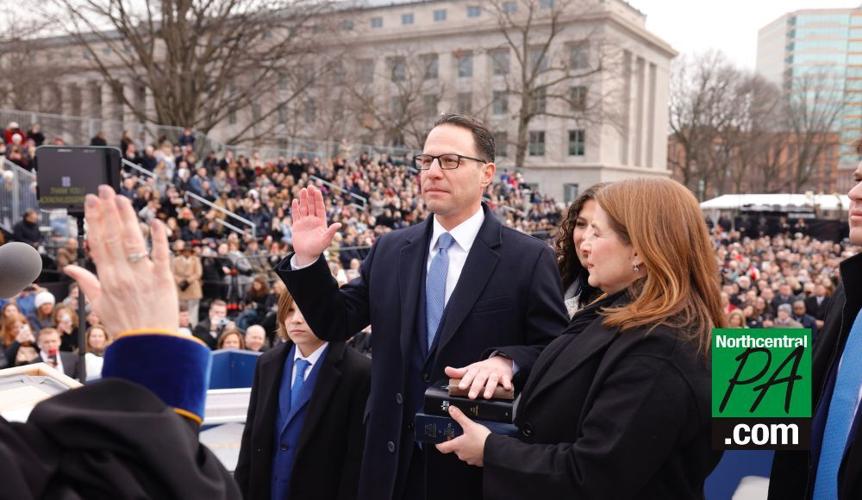 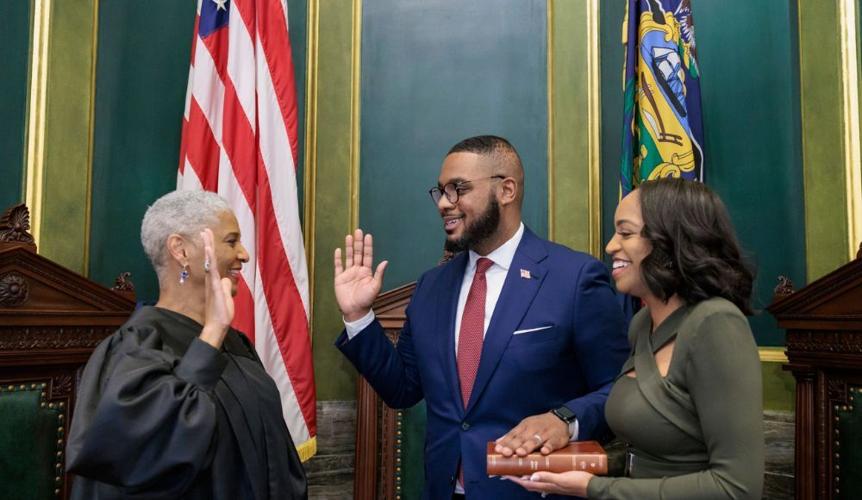 Harrisburg, Pa. — In his first moments as Pennsylvania’s 48th governor, Democrat Josh Shapiro touted his election as a rebuke of extremism and an embrace of bipartisanship.

Outside the Capitol in Harrisburg on Tuesday, Shapiro returned to ideas he had reiterated throughout his dominant campaign, pledging to deliver on promises of growing the economy, decreasing gun violence, ending the opioid epidemic, and bolstering trust in democracy.

“Here in Pennsylvania, we didn’t allow the extremists who peddle lies to drown out the truth,” Shapiro said in his inaugural speech. “We showed that our system works and that our elections are free and fair, safe and secure.”

Shapiro succeeds Gov. Tom Wolf, a Democrat who served two terms. He must now navigate Pennsylvania’s divided legislature — which includes a state House of Representatives teetering on deadlock — and decide which deals he’s willing to cut in order to make headway on his priorities.

Republican Tom Corbett, one of three former governors who had breakfast with Shapiro ahead of the inauguration, said he knows one thing for sure: The governor’s first term will only get harder from here.

“This is the first day and this will be the best day being governor,” Corbett said. “It’s a celebration.”

Also sworn in Tuesday was Shapiro’s running mate, Austin Davis. As lieutenant governor, Davis’ primary role is to preside over the state Senate. He will also chair the Board of Pardons, which hears requests for commutations and pardons.

Davis, 33, has served as a state representative for Allegheny County since 2018. He is the state’s first Black lieutenant governor and its highest-ranking Black official in the executive branch.

Davis reflected on his family history at his swearing-in ceremony, stating that the American dream is still real.

“I don’t think in my grandparents’ wildest dreams they would have ever imagined that their grandson would one day be sworn into the second highest office of this commonwealth,” Davis said.

Shapiro, 49, started his elected career as a Montgomery County state representative. He next served as a county commissioner, and later became the state’s attorney general, a role he held for the past five years.

During his time as attorney general, he cemented his statewide reputation by signing on to dozens of national lawsuits against former President Donald Trump alongside other Democratic attorneys general, completing an investigation into sexual abuse in the Catholic Church, prosecuting energy companies for environmental damages, and defending Pennsylvania’s election laws against the Trump campaign and other Republicans’ efforts to invalidate ballots.

Shapiro’s lofty political ambitions have long been well-known in Pennsylvania politics. In recent years, he channeled his decades of political capital into becoming the sole candidate in the Democratic primary for governor — itself an unusual feat in an election without an incumbent.

During the primary and general elections, Shapiro dipped into a deep well of monied backers, spending more than $69 million overall. He received major donations from individuals and organizations from inside and out of the state, from former New York City Mayor Michael Bloomberg to the political action committee of Wawa.

Shapiro won handily with more than 56% of the vote, and he outraised Mastriano by tens of millions of dollars.

In the months since, he has worked with a transition team led by some of the same wealthy donors who helped fund his campaign. That transition has been notably opaque.

The more than 300 members of Shapiro’s transition were required to sign nondisclosure agreements that bar them from publicly sharing information about their activities, at risk of a lawsuit and heavy fine.

The team is organized under the federal tax code as a so-called “dark money” group and does not have to publicly disclose the private interests that may be underwriting its work. Shapiro’s inaugural team, which will pay for his swearing-in day events, is similarly organized and is also shielding donor details.

Previous governors have privately funded their inaugural committees and celebrations, but both of Shapiro’s immediate predecessors have disclosed the names of donors.

Shapiro has had a reputation as a dealmaker throughout his political career.

As a state representative, he helped negotiate a novel scheme that allowed Democrats to elect a hand-picked, cooperative Republican as state House speaker in order to maintain power in the chamber during a period of closely divided control. As a commissioner, his fellow county officials recognized his key role in brokering a period of unanimity on a board that had often been publicly acrimonious.

During his gubernatorial campaign, he emphasized his pragmatism to attract independent and Republican voters who felt that Mastriano was too extreme.

During his inaugural celebrations, members of the state House and Senate said they expect that approach will continue.

House Democratic Appropriations Chair Matt Bradford, a fellow Montgomery County Democrat, told Spotlight PA that Shapiro is not an ideologue, and said he possesses executive, legislative, and political talent that made him an ideal fit for the office.

“I think he’s prepared on day one to be an impactful governor,” Bradford said.

A significant portion of those talents will go toward dealing with the state’s General Assembly.

Shapiro inherits a split legislature: Despite three current vacancies, Democrats are expected to soon control the state House, and Republicans will control the state Senate. Passing any legislation will require bipartisan collaboration.

Corbett said the parties are much more divided than they were during his tenure, which ended less than a decade ago.

Leaders and rank-and-file members of both parties in the legislature have said that they expect to focus on issues where they can find common ground, such as lowering the cost of insulin and raising the minimum wage.

“We are excited to work in a bipartisan fashion to keep up the great work,” said state Senate Minority Leader Jay Costa (D., Allegheny) in a statement to Spotlight PA. Costa named funding public education and infrastructure as priorities.

“I would hope that given Gov. Shapiro’s familiarity with the Capitol, his service in the legislature, that that would give him a better appreciation of the value of co-equal governance than former Gov. Wolf did, in my opinion,” Pittman said.

But some members of Shapiro’s party are watching their new governor with trepidation. Progressive state Rep. Chris Rabb (D., Philadelphia) said he wants to see what values Shapiro actually upholds as a leader.

“What I like about Shapiro is that he will sit down with anybody, and he will listen in good faith,” Rabb said. “My concern is that you can’t please everyone. And ultimately, we have to decide what our North Star is. That North Star could be political expediency, it could be justice, or anywhere in between.”

Since winning the election, Shapiro has followed his promises of bipartisan pragmatism by staffing high-level cabinet positions almost exclusively with experienced public officials and attorneys, including prominent Republicans.

Shapiro tapped Al Schmidt, a Republican election official in Philadelphia who gained attention for battling against Trump’s false claims of election fraud, for secretary of state — a role in which he’ll oversee the state’s elections. Shapiro also nominated Pat Browne, a former Republican state senator, as secretary of revenue. From 2014 to 2022, Browne chaired the state Senate Appropriations Committee. He lost his 2022 primary election by 24 votes.

WHILE YOU’RE HERE... If you learned something from this story, pay it forward and become a member of Spotlight PA so someone else can in the future at spotlightpa.org/donate. Spotlight PA is funded by foundations and readers like you who are committed to accountability journalism that gets results.