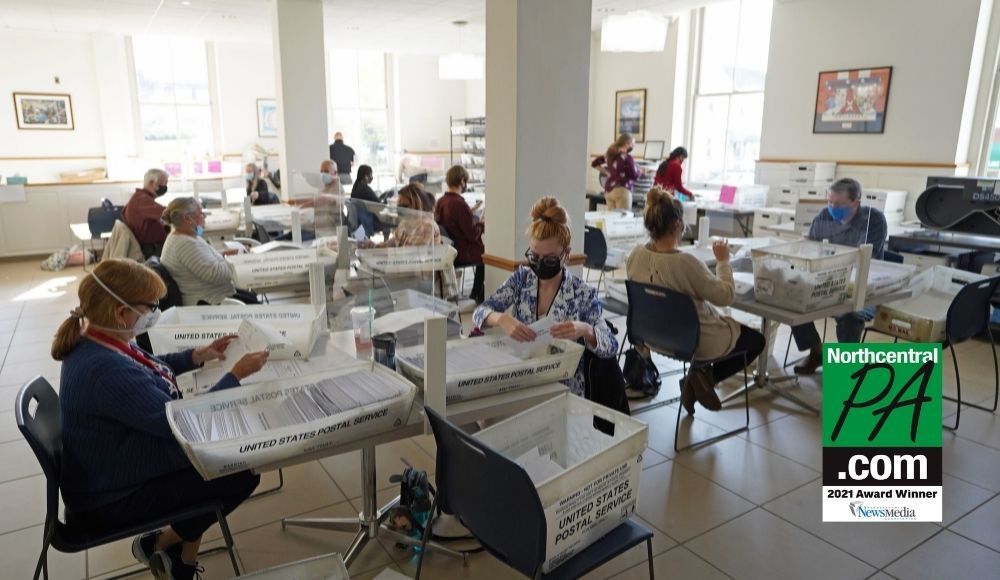 The Amistad Project firm has led litigation to challenge the results of the 2020 presidential election, including in Pennsylvania. 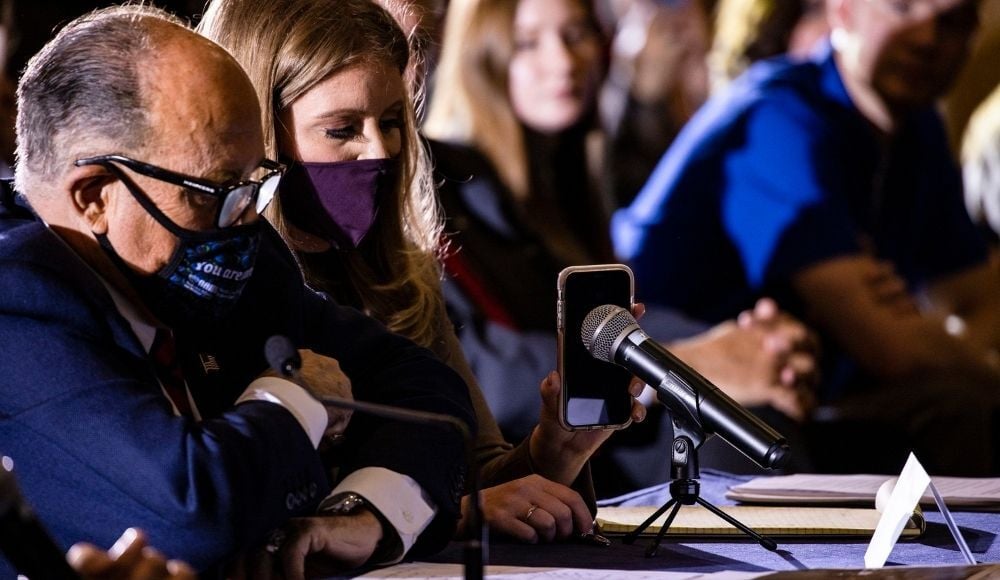 Jenna Ellis, then a member of President Donald Trump's legal team, appeared at a November 2020 meeting in Gettysburg that challenged the election results. Ellis is special counsel for the Thomas More Society.

Harrisburg, Pa. — Just before the start of the holiday weekend, the top Republican in the state Senate sued Democratic Gov. Tom Wolf’s administration over its new mask mandate for Pennsylvania schools as well as child-care and early learning centers.

But Jake Corman did not do so in his official capacity as president pro tempore of the chamber.

Instead, as a parent of two school-age children, he helped file a lawsuit backed by a conservative, nonprofit law firm with ties to former President Donald Trump that has led litigation to challenge the results of the 2020 presidential election, including in Pennsylvania.

Corman, state Rep. Jesse Topper (R., Bedford), and a group of other parents are being represented by Thomas King, a partner at a small Western Pennsylvania law firm and general counsel for the Pennsylvania Republican Party.

But for his services in the mask case, King told Spotlight PA his legal expenses are covered by the Amistad Project, an initiative of the Thomas More Society that former Trump lawyer Rudy Giuliani once described as a “partner” in the campaign’s legal efforts to overturn the 2020 election.

Though the group has been involved in several election-related lawsuits in Pennsylvania since last fall, little is known about who funds it or how it chooses its cases.

A spokesperson for the organization did not respond to requests for comment.

The latest lawsuit was filed just days after Wolf’s acting health secretary, Alison Beam, issued a mask mandate for all public and private schools in the state, as well as early learning and child-care centers. The GOP-controlled House of Representatives is returning to the Capitol from its summer recess earlier than planned to consider how to block the order.

Corman hasn’t yet committed to moving up the Senate’s return, but he has been highly critical of the mandate on conservative radio and, late last week, with little fanfare or public notice, joined the lawsuit with the other parents.

The senator did not respond to a request for an interview. Corman’s spokesperson, Jason Thompson, said taxpayer dollars are not being used to pay his legal fees.

Similarly, a spokesperson for Topper said the House of Representatives is not paying his legal fees.

“Legislatively, I looked into it, and I realized the General Assembly was not an aggrieved party in this matter,” Topper said Wednesday.

In talking with Corman, Topper said they realized that they felt the same way as other parents with children in school.

“We have every right as aggrieved parents to file this suit,” Topper said.

The Amistad Project, which describes itself as the nation’s “leading election integrity watchdog,” is run by former Kansas Attorney General Phill Kline. The Kansas Supreme Court indefinitely suspended his law license in 2013 over professional misconduct related to his investigations of abortion providers, and the Thomas More Society lists Kline as a former client.

Kline did not respond to a request for an interview.

In the weeks before and after the November election, the Amistad Project filed lawsuits in state and federal courts seeking to overturn President Joe Biden’s win in key swing states.

The Washington Post, along with other news organizations, reported that the Thomas More Society had ties to Trump’s campaign, calling into question its independence and motives in taking legal actions. Trump’s then-senior campaign legal advisor, Jenna Ellis, is special counsel for the society, which in December said Ellis was not involved in the Amistad Project’s election-related efforts.

In Pennsylvania, King and his firm, as special counsel for the Amistad Project, have filed at least five election-related lawsuits as well as one that challenged the Wolf administration during the pandemic.

Two weeks after the state certified its presidential results, they unsuccessfully sued on behalf of a group of Republican state lawmakers seeking to block the vote tally. The suit, The Inquirer reported at the time, was “supported with already debunked conspiracy theories and a bevy of complaints that have previously been rejected by state and federal judges in earlier legal fights.”

Another suit brought by King and the project — this one in federal court on behalf of several Republican state representatives challenging the use of private grant money to support some counties’ elections — ended in November, when the U.S. Supreme Court refused to intervene.

King’s firm and the Amistad Project also represented Republican congressional candidates Sean Parnell and Luke Negron in a lawsuit against the Allegheny County Board of Elections over mail ballots that were incorrectly sent to voters because of a clerical error. The parties settled that lawsuit in October.

Recently, the Amistad Project announced King had been hired to represent Fulton County in south-central Pennsylvania in its quest to reverse an order by the Wolf administration decertifying the county’s voting machines.

Acting Secretary of State Veronica Degraffenreid decertified the machines after the county disclosed that an outside firm, Wake Technology Services Inc., had conducted an audit of the equipment after last year’s contentious election. Wake TSI was later involved in Arizona’s contentious, partisan ballot review.

King also worked with the Amistad Project last year on a federal lawsuit challenging the Wolf administration’s business closure orders during the pandemic. A judge ruled against the governor, but an appeals court later dismissed the suit because the issue was moot.

In an interview Wednesday, King said he has been affiliated with the Thomas More Society for “a couple years.”

He said the Amistad Project raises funds to pay for attorneys’ legal fees, “and that’s what’s occurring here as well,” referring to the mask mandate lawsuit.

When asked whether the case was being handled pro bono for the families and schools involved, King said, “That’s not something that I can discuss with you.”

It is not clear when the Thomas More Society launched the Amistad Project.

In required filings with the Internal Revenue Service for 2019, the Thomas More Society described itself as a public interest law firm advancing “basic human rights,” as well as voter integrity and voter participation.

It also reported $9.6 million in revenue, $3.5 million more than in 2018. The lion’s share of the $8.7 million it spent in 2019 went toward legal expenses, although the filing does not provide a breakdown of those costs.

The organization does not publicly disclose its donors — nor does the law require it.

Philip Hackney, a former IRS lawyer who now is an associate professor of law at the University of Pittsburgh, said in an interview that nonprofit organizations such as the Thomas More Society only have to disclose donors to the IRS.

Hackney said the thinking behind that rule is that donor information is a private matter — although in his opinion, there should at least be exceptions for nonprofits that say they operate in the public interest and receive tax benefits in return.

“To the extent that these organizations are engaged in an activity on the public’s behalf ... I believe they should be disclosing more,” he said.

For his part, Topper said he has not had contact with the Amistad Project directly, only with King. When asked whether he was concerned about who funds Amistad, he said no.

“No, because I don’t consider myself being affiliated with them in this way,” he said.

WHILE YOU’RE HERE... If you learned something from this story, pay it forward and become a member of Spotlight PA so someone else can in the future at spotlightpa.org/donate. Spotlight PA is funded by foundation sand readers like you who are committed to accountability journalism that gets results.