Advocates are trying to bring greater attention to domestic violence  — and ways to prevent it.

At a Capitol ceremony on Monday, government leaders, lawmakers and advocates honored 123 victims who were killed last year.

“These grim statistics indicate that we still have much more work to do,” Susan Higginbotham, CEO of the Pennsylvania Coalition Against Domestic Violence, said during a Capitol ceremony.

Over the most recent 10-year period, the annual number of domestic violence victim deaths in Pennsylvania reached a high of 135 in 2010, according to data collected by the coalition.

The lowest number of domestic violence deaths occurred in 2014 and 2016, when there were 105 deaths each of those years.

Higginbotham’s group is working on legislation that would increase the availability of safe and affordable housing for victims — although the proposal has not been introduced yet in the legislature. 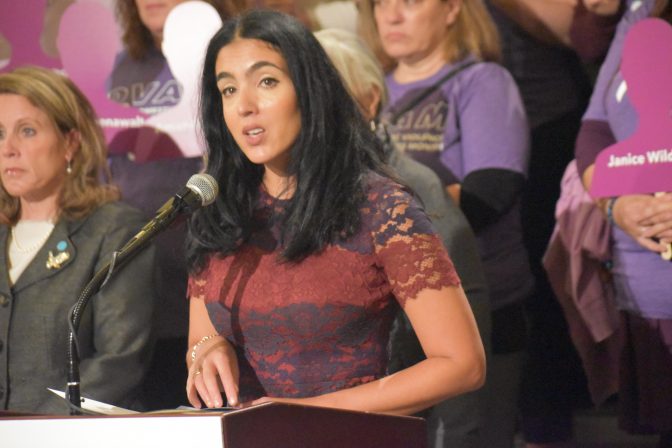 Gisele Fetterman, the Second Lady of Pennsylvania, speaks during a domestic violence awareness ceremony at the state Capitol on Oct. 21, 2019.

The group is also looking to increase state funding for domestic violence services.

In this year’s budget, lawmakers approved a 10 percent increase — raising the budget line item from nearly $17.4 million to nearly $19.1 million.

She described how a domestic violence victim reached out to her about eight years ago, when Fetterman’s husband was the mayor of Braddock in Allegheny County.

“I arrived to a very scared, very bruised young woman and her two children,” Fetterman said. “And I quickly, as I ushered her through this world, I landed in the lap of advocates … who were so welcoming, so supportive, and were really able to become the bridge that allowed her to come through on the other side, which she did.”