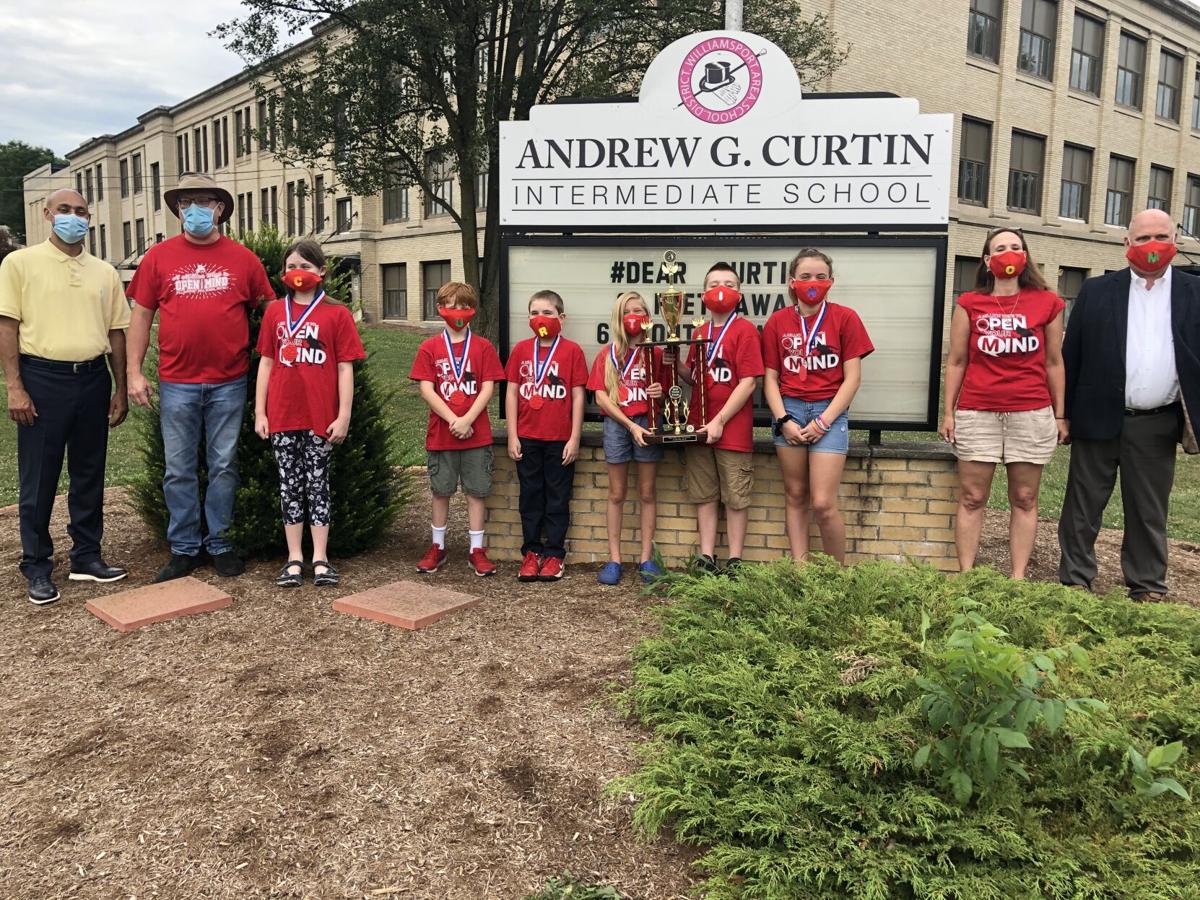 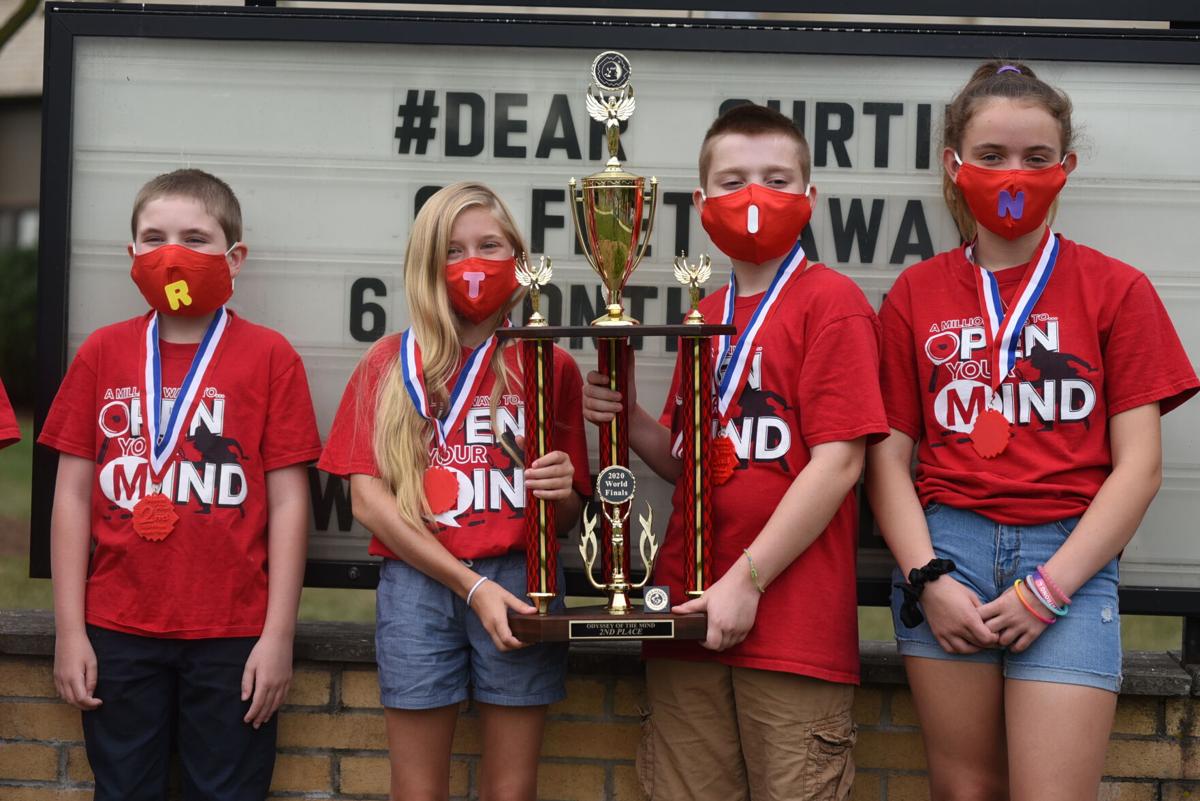 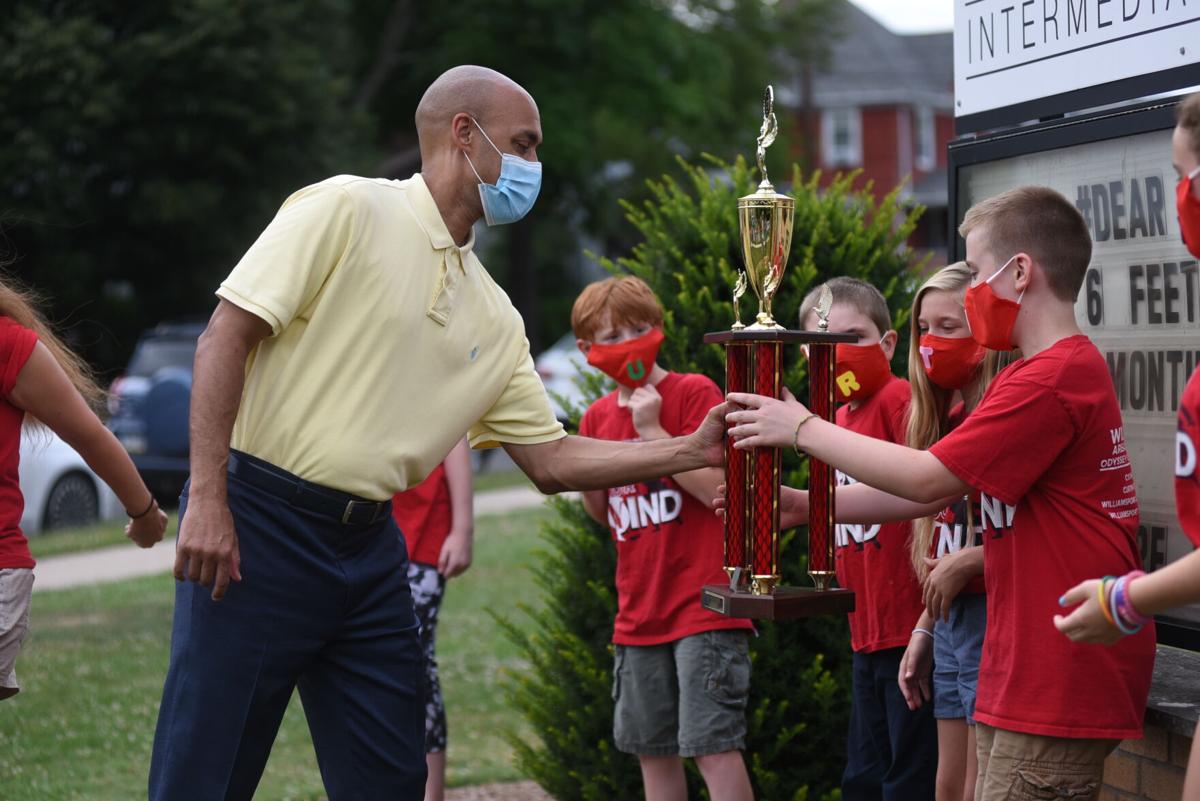 Williamsport Mayor Derek Slaughter presents a trophy to Curtin’s Odyssey of the Mind team that finished in second place in the word in the Classics category. They solved problem 3 with this year’s challenge called “The Effective Detective.”

Williamsport, Pa. — “We were all really nervous when our names weren’t called for third. We almost froze and then it was like a boom," said Williamsport Odyssey of the Mind second-year team member Asher McClelland. "We were all screaming and yelling. It was cool, because we all had similar, but different reactions. Some of us were quiet and then others, like me, were screaming.”

McClelland described the moment he and his team of fourth and fifth graders from Curtin Intermediary School in Williamsport learned they took second place in the World Championship for Odyssey of the Mind (OM).

OM is a competition for young students that involves problem solving in creative ways. The competition came about in the 1970’s when a teacher named Dr. Samuel Micklus challenged his students to creatively solve problems. Since then, it has grown globally and challenged kids from all ages.

The group of six team members and two coaches from Curtin celebrated a finish that named them the second-best team out of 118 competing in the world.

Overall, four Williamsport teams placed in the top 20. Curtin's group was in the first division.

The team solved problem 3, the classics, this year called “the Effective Detective.” It involved solving a problem, giving step-by-step details on each process, and eventually acting out a skit to explain each step they took to reach the conclusion.

“It’s rewarding,” Williamsport Mayor Derek Slaughter said. “It’s really a testimony to our school district. We have a lot of really exceptional programs, Odyssey of the Mind being one of them.”

Slaughter was on hand Wednesday evening to present the team with a trophy for their accomplishments. It was an extra special moment for Slaughter, who was a teacher in the district before being elected mayor.

“This is great recognition for the kids,” Slaughter said. “It’s a joy for me to come out and do things like this to recognize our school district and students.”

The group won regionals and then submitted an entry for the video world finals. They were also given a chance to explain their problem-solving techniques with a skit.

The group shined in the video portion. It’s a group of big personalities and each member expressed themselves well throughout the explanation portion, said their coach.

That all led to celebration as the group’s top finish was announced.

Pa. education secretary will step down in October to lead Lancaster technical college

It was a close finish, too. Curtin posted a final score of 334.99 and Long Beach Elementary, out of New York, posted a final total of 334.89 to secure third place.

The explanation was outstanding and helped the group complete a remarkable journey to be named the second best in the world, said Moore.

“It means a lot to me,” first-year participant Ava Carter said. “When we won regionals, I was really excited. When our named popped up for second my heart was pounding really fast and I cried. It means a lot.”

Carter decided to join the team to make new friends and be challenged. She never expected anything like the second-place finish.

“I wanted to try something new and make some new friends,” Carter said. “Everybody started jumping around and screaming. We knew somebody was going to place. We had a good feeling. When we got named second it was really exciting.”

Wednesday was the first time since the celebration all the kids and coaches were able to get together. And what better way to celebrate the reunion than with a big trophy being presented by the Mayor of Williamsport.

“The kids haven’t been able to be together in person since March, even though we have been meeting through Zoom regularly,” Moore said. “They just deserve so much recognition.”

The group would have been in an arena celebrating the accomplishment with thousands of peers but that didn’t happen as COVID-19 canceled the in-person event. It didn’t take away from the celebration the group had when they heard their names over the conference call.

“We were all screaming,” fourth grade team member Cooper Gutberlet said. “It was a very happy moment. Everyone was excited. It was one of the best moments yet.”

Odyssey of the Mind Problem #3 Classics… The Effective Detective Division I Finalist Results: