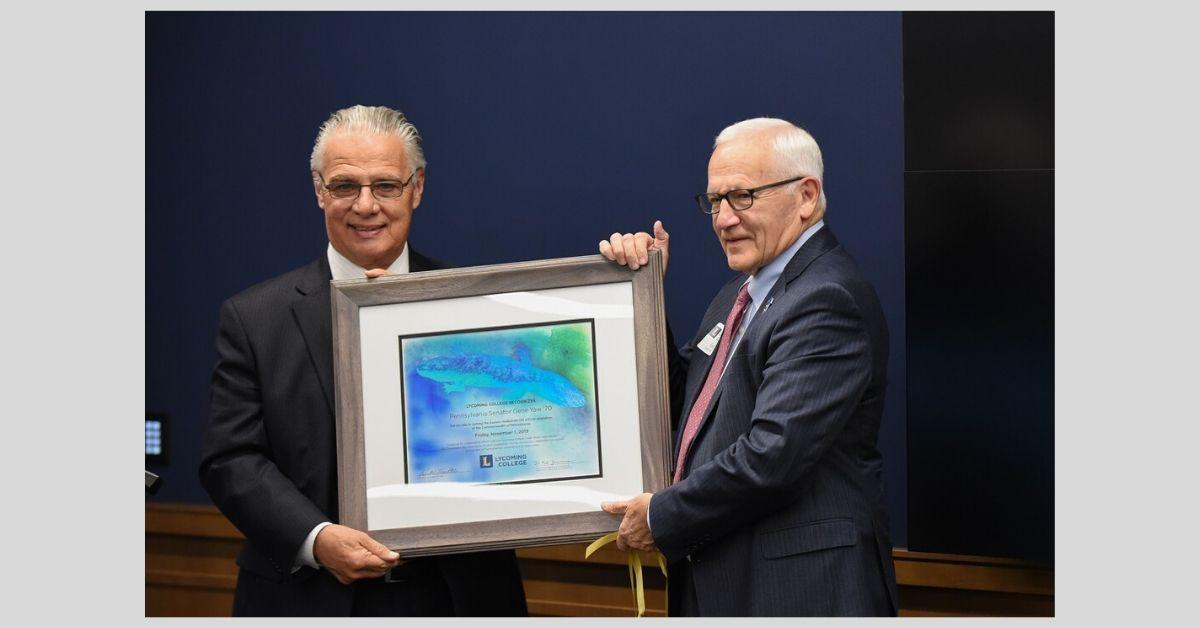 Lycoming College students and staff presented a print of an Eastern Hellbender to Senator Yaw '70 (right) during the event on Nov. 1. Photo provided 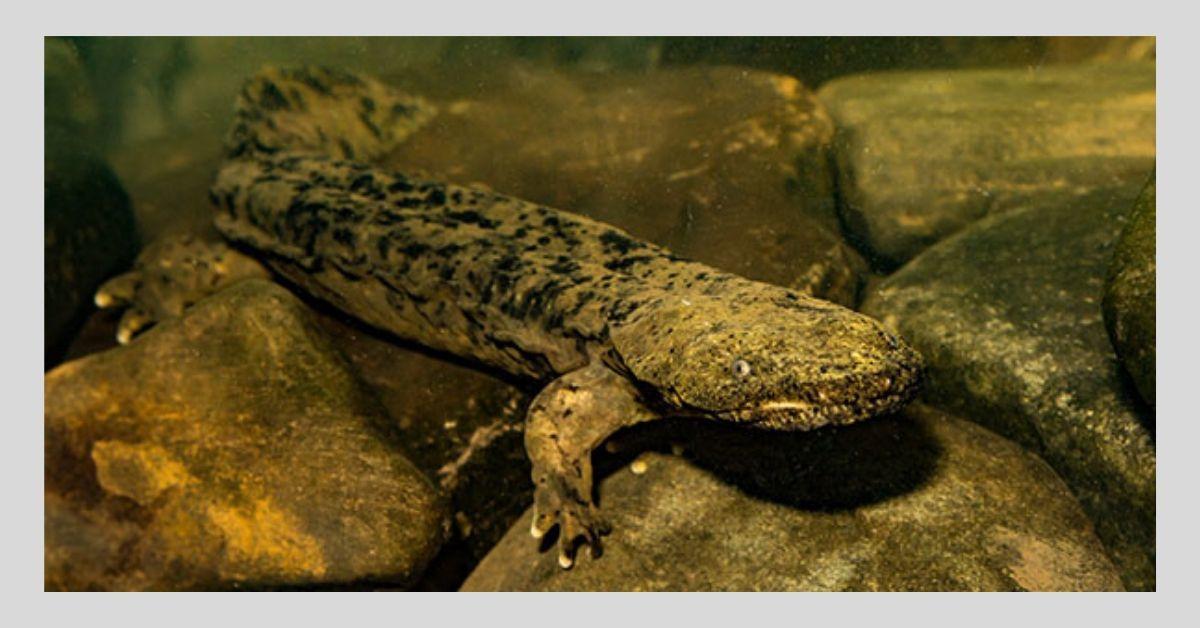 To celebrate the naming of the Eastern Hellbender as the official amphibian of the Commonwealth of Pennsylvania, a special event was held on Friday, Nov. 1.  Lycoming College's Clean Water Institute and the Pennsylvania Chesapeake Bay Foundation's Student Leadership Council acknowledged Senator Gene Yaw '70 for his cooperation and role in giving the salamander its prestigious title, as well as helping students participate in the legislative process.

The unofficial mascot of Lycoming College, the Eastern Hellbender is the largest salamander in North America. It subsists on a diet of crawfish, toads, snakes, and fish. Since 2006, Clean Water Institute student interns have engaged in the study of the Hellbender, catching more than 3,000 of the creatures while they conduct research on where the local populations live and collect data on their health. More recently, the focus of their work has expanded to include conservation and restoration, which requires the creation of habitats and the collection of eggs to hatch. The group raises newly-hatched Hellbenders and releases them back into the wild.

The mission of the Student Leadership Council (SLC) is to create a constituency who will value the Chesapeake Bay and its watershed as a living, connected system, and who will lead others in action to restore clean water and ensure a high quality of life for all its inhabitants.

“For our council the Hellbender bill meant so much more than just a designation. It meant that the Hellbender would not only be the state amphibian, but a symbol for clean water,” said Lenka Platt, senior at Halifax area high school and president of the SLC. “As an indicator species, the Hellbender needs cool clean water to survive, making it the perfect state amphibian for Pennsylvania. We are all so thankful that Sen. Yaw agreed with us, and that he agreed that students could and should play an active role in the legislative process. Sen. Yaw showed us how we can make an impact.”

The Hellbender’s road to fame and public attention began in 2016 when the Clean Water Institute’s research drew the interest of the SLC. Curious about how they could assist in the amphibian’s cause, the group of high school students proposed and drafted a bill requesting the creature be named the state amphibian.

Senator Yaw championed the student-drafted bill, presenting it to the Senate State Government Committee while noting that the bill was about both naming a new symbol for our state and about fostering youth involvement in the legislative process, advocating for clean water in Pennsylvania, and promoting conservation programs.

Since then, the Eastern Hellbender — lovingly nicknamed the Allegheny alligator, the mud-devil, and the snot otter, among others — has transformed into a media darling, grabbing the attention of news outlets across the country, and even the world, as it climbed its way to the top of the state legislature to claim its title, “Official Amphibian of the Commonwealth of Pennsylvania,” when Gov. Tom Wolf signed the bill into law on April 23.

“From the environmental resource and energy perspective, what better symbol could we have of clean water in Pennsylvania than the Hellbender?” asked Yaw. “This was an educational experience that [the SLC] will never forget. It’s a pleasure for me and something that I’ll remember too. We started this from scratch, and that’s a really special accomplishment.”

“Even as we recognize Sen. Yaw, this is also a time to applaud the impressive efforts of the Student Leadership Council of the Chesapeake Bay Foundation in advocating for and organizing to support this important legislation,” said Kent Trachte, president of Lycoming College. “The research that established the scientific basis that the health of the Hellbender could be understood as an indicator of water quality has been conducted under the auspices of the Lycoming College Clean Water Institute, now in its 20th year.”