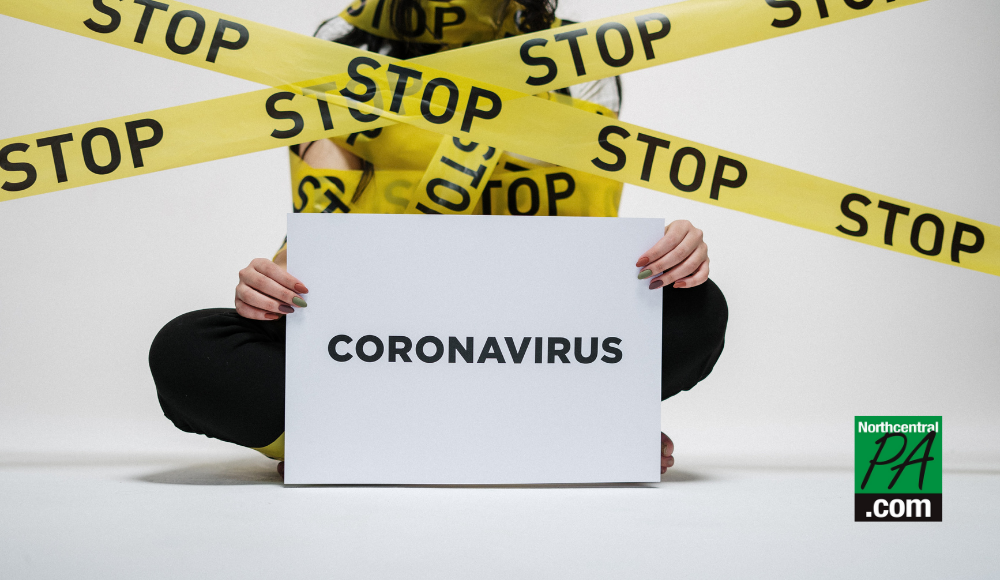 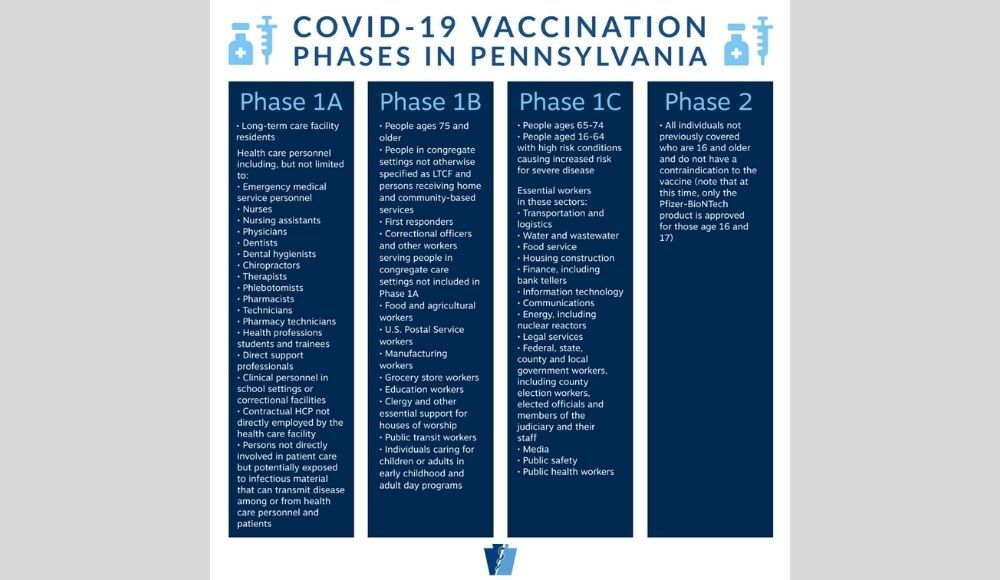 An explanation of the phases of PA Dept. of Health's vaccination plan.

Harrisburg, Pa. – There's been a lot of confusion surrounding the distribution of the COVID-19 vaccine in Pennsylvania, especially in our rural communities. To offer some answers, the Center for Rural Pennsylvania hosted a public hearing to discuss vaccine rollout.

Here are the key takeaways:

1. Vaccine Roll-out: Who's in charge?

Each week on Friday, Operation Warp Speed informs the Pennsylvania Department of Health (DOH) exactly how many doses of the Pfizer and Moderna vaccine the state will receive the following week.

Then, the DOH figures out where those vaccines will be sent in accordance with the phases of distribution. The decision for what type of worker is included in a specific phase was made by the CDC Advisory Committee, explained Dr. Levine. The phased distribution in Pennsylvania follows the categories chosen by the CDC.

The vaccines are shipped directly from the Federal Government directly to the specific locations as specified by the Pa. DOH.

“We never actually touch the vaccine at all, we work with CDC and Operation Warp Speed to get the vaccines out,” said Dr. Levine.

The Pfizer vaccine has been designated for long term care facilities.

Due to this contract, the DOH has very little control over vaccine distribution to long term health centers.

3. The Data: Distribution vs. Allocation

The Department of Health has created a dashboard to track vaccine distribution in the state.

Dr. Levine explained the reason for the gap.

Additionally, the dashboard data does not reflect the current distribution numbers. "There is a 24 hour window from the time hospitals give the vaccine to reporting and a 72 hour lag time with CVS and Walgreens," Dr. Levine said.

The original Federal Funding package for vaccine rollout only provided Pennsylvania with $14.5 million, which equated to about $1.20/person.

"I think this distribution has been underfunded by the federal government," Dr. Levine stated. However, Dr. Levine expressed hope that funding from the new stimulus deal, which includes over $100 million for Pa., will help speed things up. "We haven't gotten it [stimulus funding] yet, but will be getting it shortly," she said.

Steve Johnson President of UPMC Susquehanna echoed Dr. Levine's comments about the importance of funding, noting that while hospitals in the UPMC system have the "infrastructure and capacity" for vaccine distribution, additional funding is needed to meet demand in a timely and effective manner.

“We are painfully aware that the vaccine distribution has been very fluid, it has been awkward and unpredictable, but it’s getting better," said Johnson.

5. Getting your Vaccine: Who? What? When? Where?

The DOH is following the CDC guidance on phased distribution of vaccines. Currently, the state is in Phase 1a, which includes healthcare workers.

Healthcare workers who have not yet received a vaccine, including dentist office staff, EMS personal, etc. are advised to contact their local hospital to schedule a vaccine.

Following the Federal Government's recent change to vaccine distribution guidance, announced yesterday, individuals aged 65 and over as well as individuals of any age with pre-existing conditions are now included in Phase 1b of distribution.

Despite the announcement, Operation Warp Speed has not increased the planned number of vaccines allocated to each state. Dr. Levine said she anticipates a rush for vaccines next week, since the state now has more people who are eligible for their vaccine, but the same amount of vaccines.

"We get what we get. We’re trying to divide it in a fair way. What we don’t want to do is for people to queue up like they did in Florida. Everything will be calling or online for an appointment,” said Dr. Levine.

Next week, the DOH plans to launch an online map which which will show locations giving vaccines, as well as their phone numbers and emails so individuals can make appointments to get vaccinated. Vaccine scheduling is done locally, explained Levine, not by the state.

The overarching messages of the panelists were: the need to build trust around the safety and necessity of vaccines; communicating how, where and when residents can get vaccines; and making sure there are sufficient staff and funding to administer and distribute vaccines.

“We’re hoping that the information presented today will help inform distribution planning, remind our residents to remain vigilant in preventing the spread of this virus, and encourage residents to talk with health care providers about getting the vaccine,” said Sen. Yaw.

Considerable clouds early. Some decrease in clouds later in the day. High 38F. Winds W at 10 to 15 mph.