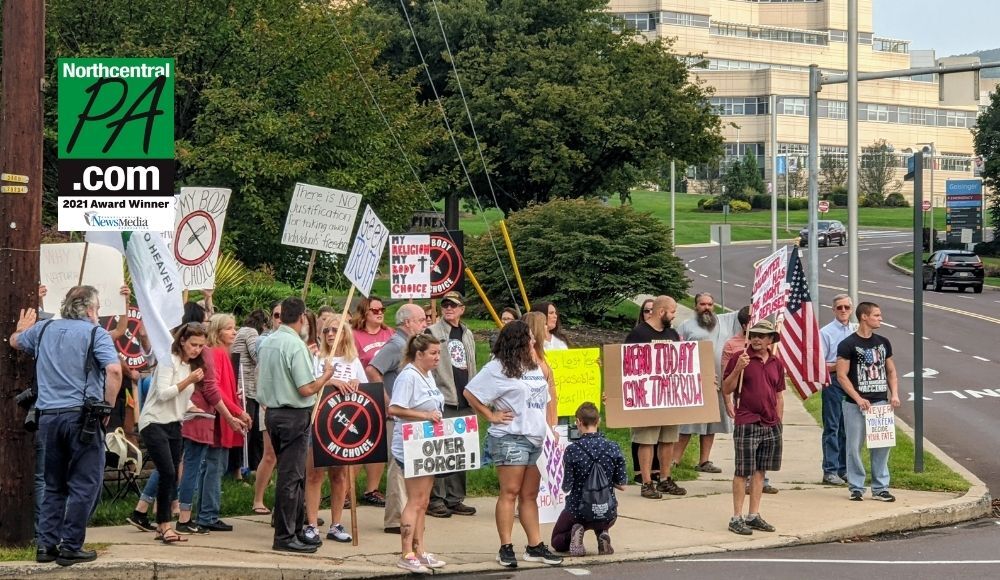 A peaceful demonstration took place at the entrance to Geisinger in Danville, Pa. on Tuesday, Sept. 14 against the vaccine mandate the health system announced on Aug. 25. 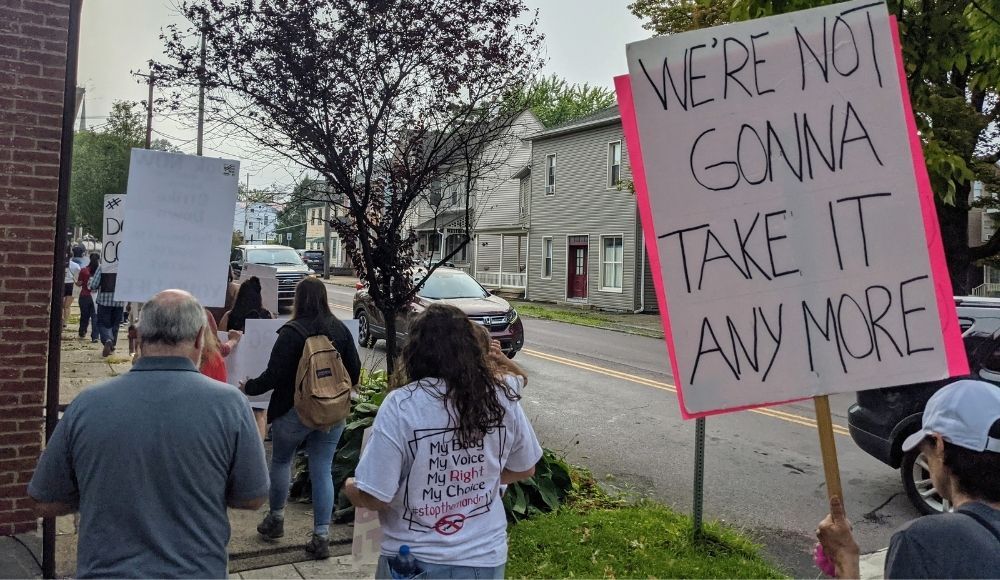 The group walked from the nearby Weis Market parking lot to the front entrance of Geisinger Health Danville campus. 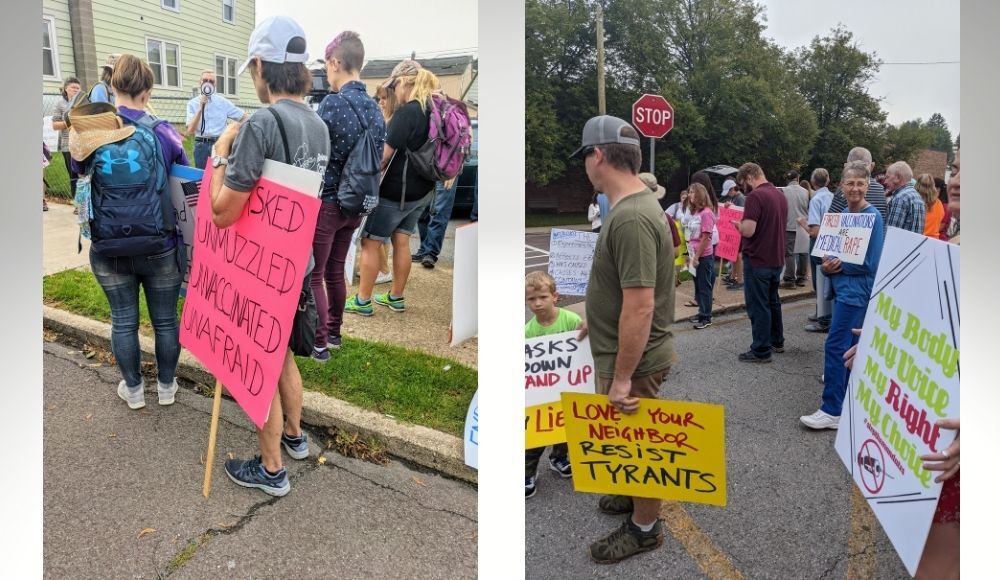 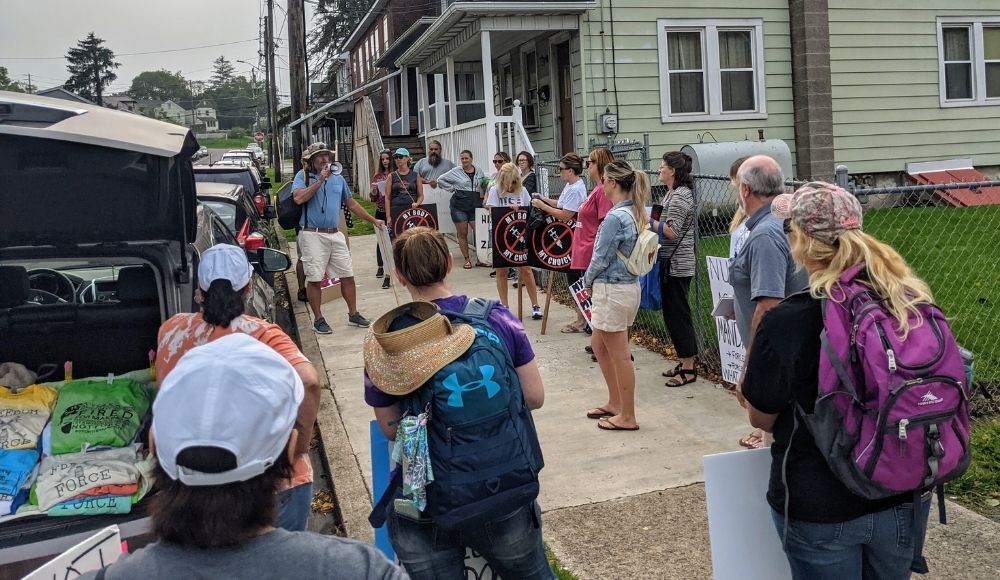 William Huntingdon, holding the bullhorn, said he was not the organizer of this protest. "It's a grassroots movement," he said. He did call the demonstration to order and offer instructions on conducting a peacful protest.

Danville, Pa. -- It's not the vaccine itself that many of the participants in Tuesday's demonstration in Danville were there to speak out against, it's the mandate that Geisinger has implemented, forcing the health system's employees to be vaccinated by November 1.

The group on the march included both healthcare workers and supporters from within the community, echoing similar sentiments of "if we don't speak out now, we'll only continue to lose our rights."

"This is just the beginning," said one protestor who wanted to remain anonymous.

In fact, all who were approached to speak with NorthcentralPa.com on camera declined the request. Many said it was out of fear of retaliation from Geisinger.

Geisinger administration made the following public statement in response to the protest lining the street in front of the hospital:

“We support our employees and respect their right to voice their opinions. As we face another surge in COVID-19 infections and hospitalizations, the science is clear that the vaccine is our best hope to stop the spread of COVID-19 and prevent more dangerous and contagious variants from taking hold in our communities. Requiring all Geisinger employees to be vaccinated fulfills our obligation to do everything we can to protect our patients, their families and each other. And it also helps protect our friends and neighbors — who rely on us every day for high-quality, accessible care — by making sure we have the staff available to provide it. An exemption process is available for those who have a documented and very specific medical reason or sincerely held religious belief that precludes them from receiving the COVID-19 vaccine.”

William Huntingdon of Bloomsburg was an unofficial organizer of Tuesday's protest, carrying with him a bullhorn and issuing the request that the participants behave peacefully.

"Martin Luther King, Jr. gave us the pattern. Peaceful protest," he said. This is very personal, but we almost have to divorce ourselves from it because they want us to act in a bad way and we can't have that," he told the crowd before walking toward the hospital campus.

The mandate prompted Huntingdon to take up the signs and march. "I'm not against the vaccine," he said. "If you feel you have enough information to make decisions for own personal situation, then go for it. That's just not my choice," he said.

No one should be forced to make the decision to lose their job if they don't want to get the vaccine, he said, and that is what Geisinger is forcing.

Another protester noted Pennsyvlania law, citing philosophical and religious exemptions. "They demanded a minister's signature," the woman said, "and you're not supposed to do that by law. They scared people into thinking they didn't have a choice when in fact they were breaking the law."

According to a Geisinger spokesperson, 82 percent of Geisinger employees are fully vaccinated, have received at least one dose, or been approved for an exemption.

As of midnight, September 14, Geisinger reported 137 patients with COVID-19 in hospitals systemwide.

The Pennsylvania Department of Health said on Tuesday that the report on COVID-19 post-vaccination cases, commonly known as "breakthrough cases," shows the overwhelming majority of cases, hospitalizations and deaths in the state are among the unvaccinated.

Huntingdon said, "There is a 99% chance if I get this, I'll survive. So at this point I would take my chances with a 99%. Long term, like five, 10 years down the road the truth will come to light. Sometimes it takes a while and we just don't know enough at this point."