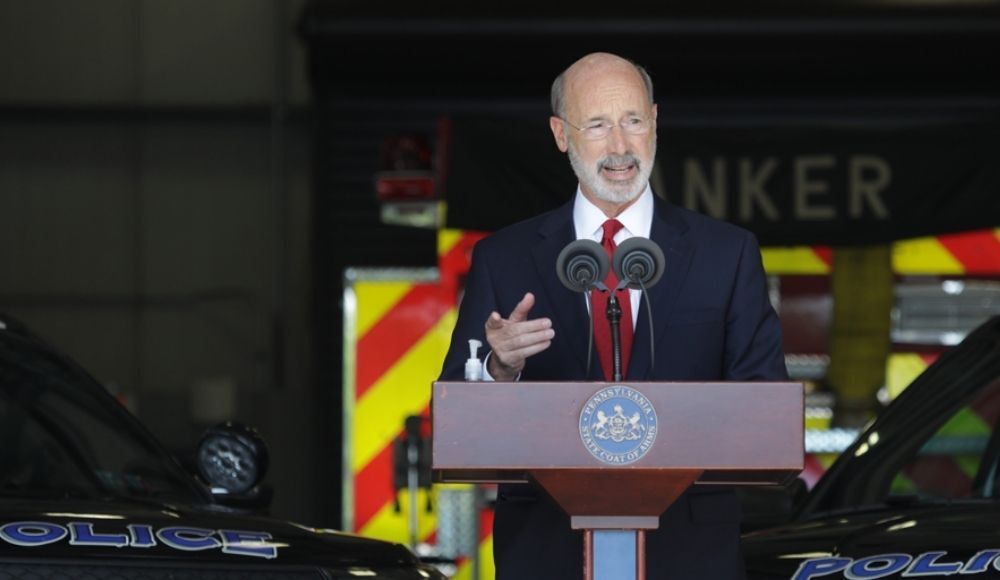 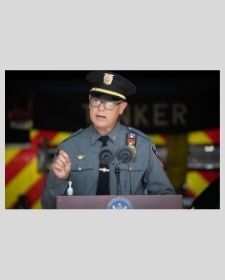 Susquehanna Twp. Police Chief Rob Martin speaking to the press. Governor Wolf visited the Susquehanna Township Police headquarters today to discuss the important roles education and understanding play in the enforcement of the various COVID-19 mitigation orders in place across the state.

While support of law enforcement was the subject of today's press conference, comments Governor Wolf made regarding the PIAA guidelines for spectators may have overshadowed today's intended message.

Last week the PIAA issued guidelines for athletic competition limiting spectators at all youth competition. K-12 sports, according to the guidelines, will have only student-athletes, coaches, officials, and other staff in attendance, per Governor Wolf's order.

Related reading: Flexibility is key as PIAA marches ahead with fall sports plans

Very quickly, a change.org petition started by Shannon Fry garnered more than 43,000 signatures. The petition insists that "Child athletes need to have parents and fans at their events--their self esteem soars when they know someone who knows and loves them is in the audience watching them do what they love."

Today the governor indicated he may be wavering on the statewide order.

"School districts are looking at each of their situations differently," said Governor Wolf. "What happens in schools should be consistent with what happens on the playing fields. If a school is going completely virtual, it seems hard to justify having in-person contact sports being played in the fall," he said.

However, if the school is going to be open and teachers, administrators, and parents feel it’s safe to reopen, then "that’s a different proposition for contact sports," the governor said.

"We're trying to allow for different situations in different parts of the state because we do have some diversity and their sports decisions and their education decisions ought to be governed by what’s going on locally," he said.

“I hate to sound fuzzy," the governor said, "but this is a work in progress.”

On Monday, sixty-three Pennsylvania House Republicans wrote to Gov. Wolf and the Pennsylvania Interscholastic Athletic Agency (PIAA) to request a change in recent policy prohibiting spectators at PIAA events, including parents of athletes.

“At a time when folks have had the five-months-long experience of social distancing and protecting themselves and others from a contagious virus, it makes no sense that people might be less safe sitting in the football stands or around the high school track at a soccer match, with appropriate modifications, than in the aisles of their local mega retailer,” the letter to Gov. Wolf reads.

“As some of the most visible public servants in the commonwealth, the state police will continue working collaboratively with the Department of Health and local police departments to remain at the forefront of law enforcement pandemic response efforts,” said Lieutenant Colonel Price.

"We are grateful to the majority of Pennsylvanians who have stepped up to follow mitigation requirements and for all the support our troopers and liquor control enforcement officers have received during the past several months,” he continued.

Local law enforcement’s role is a collaborative one with state agencies and local officials, and Chief Martin stressed his department’s work to educate businesses and residents, and to refer any suspected violations of the governor and Dr. Levine’s orders to the proper state agency if necessary.

Chief Martin said that as the pandemic reached Pennsylvania, "I did what I often do to prepare for crisis as a leader, I made a visit to history," referencing a WWII-era fireside chat of Franklin D. Roosevelt, in which the president gave an address titled "Sacrifice."

"He shared with the American people the need to sacrifice, and I quote, 'This is one front when every American is in action and will remain throughout. The front is right here at home in our daily lives, and in our daily tasks.'"

“Our citizens in Susquehanna Township have been inspiring. On many occasions they have contacted our police department and our government center for advice, guidance, and our assistance. We wish to meet our citizens where they are and be an educational voice of gentle persuasion,” Martin said.

“Of the times that we have had to make referrals to our commonwealth partners, we have been met with cooperation and understanding. I want to thank the commonwealth for being a valued partner, and thank Governor Wolf for his always civil mannered discourse, as what our country needs right now is civility.”

According to a recent poll by Franklin & Marshall College, two-thirds of registered voters in Pennsylvania believe it is “extremely important” to wear a mask whenever they leave home.