Williamsport --  Citing concerns for wildlife, specifically a Bald Eagle's nest near the fireworks launch area, the leading sponsor of "Set the Night to Music," Backyard Broadcasting, has announced a new location for the July 4 fireworks show.

"Because of various environmental and wildlife concerns, the Mayor of Williamsport has suggested that we move Backyard Broadcasting’s 25th Annual Fireworks to an alternate location. The Lycoming County Fair Association in conjunction with the borough of Hughesville have graciously offered us the use of the Lycoming County Fairgrounds!" said a post on Facebook.

"So on behalf of UPMC and UPMC Health Plan and our other fine sponsors, we invite you to join us for our annual fireworks display as we 'Set the Night to Music' at the Lycoming County Fairgrounds in Hughesville on Saturday, July 4th at 9:40 p.m., complete with a choreographed patriotic soundtrack heard on Backyard Broadcasting radio stations 105.1 WILQ, 99.3 and 103.7 WZXR, 93.3 WBZD and Hot 107.9. Unfortunately there can be no vendors or entertainment but there will be plenty of 'social distancing parking' at the fairground’s lot that night starting at 7 p.m. Stay tuned for more details!"

"I am saddened to hear that the 25th Annual 'Set the Night to Music' 4th of July fireworks display has been moved from the viewing area of Williamsport.

"This was a decision made by the sponsor: Backyard Broadcasting.

"After it was clear that PennDOT would not grant a permit for the fireworks at the usual bridge location, I worked with Backyard Broadcasting to find another reasonable location. We thought we had found the right spot before it was realized that an occupied Bald Eagles’ nest was nearby. Federal law requires a 1/2-mile radius buffer around an active Bald Eagles’ nest for anything such as a fireworks display.

"I reached out to Backyard Broadcasting to inform them I needed to contact the state and federal government for written permission from them to ensure that the state and federal government had no concerns related to the fireworks display disturbing the active Bald Eagles’ nest. The display would have just been outside of the required 1/2-mile radius.

"owever, the 1/2-mile buffer went onto the property from where the fireworks were slated to be shot off. As Mayor, I requested and was waiting for written confirmation from the federal government that we had the 'go ahead.'

"Tonight, I have just learned — via social media — that Backyard Broadcasting decided to move the fireworks.

"Backyard Broadcasting has made their own decision without waiting for the official clarification which would have informed my decision." 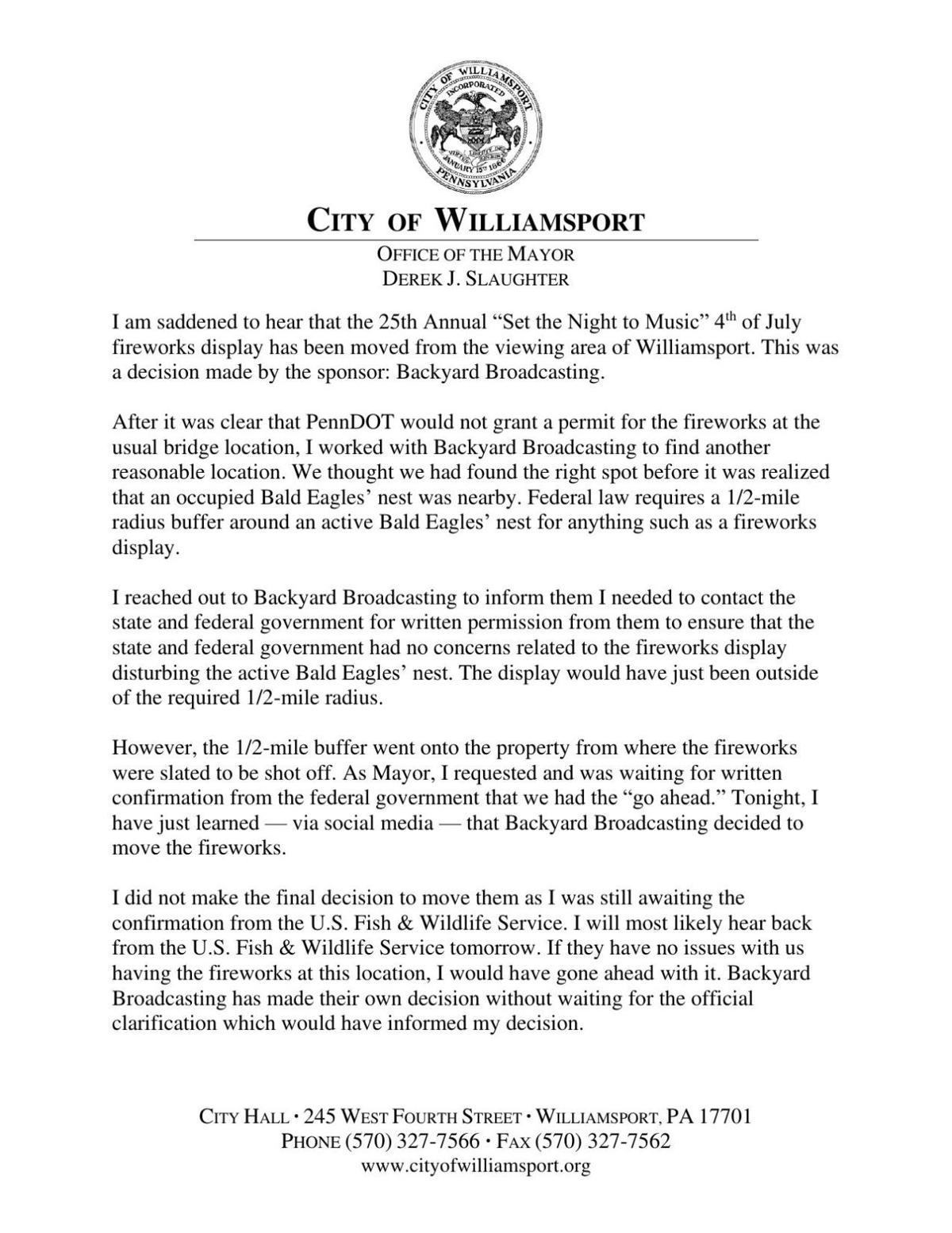 Partly cloudy. A stray shower or thunderstorm is possible. High 88F. Winds S at 5 to 10 mph.