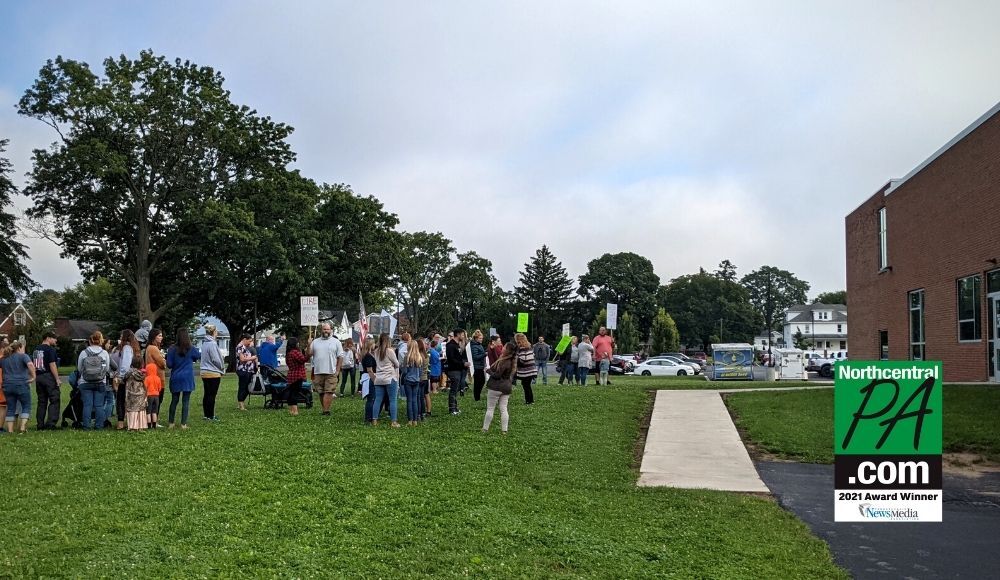 The protesters gathered on the lawn outside the district's business office. 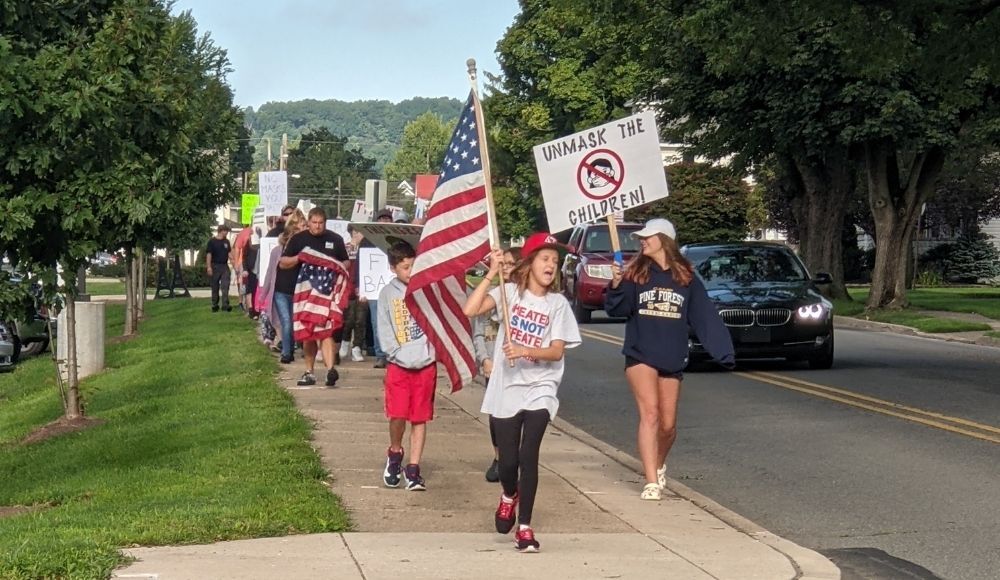 Protesters ranged in age. Some of the most vocal were minors. 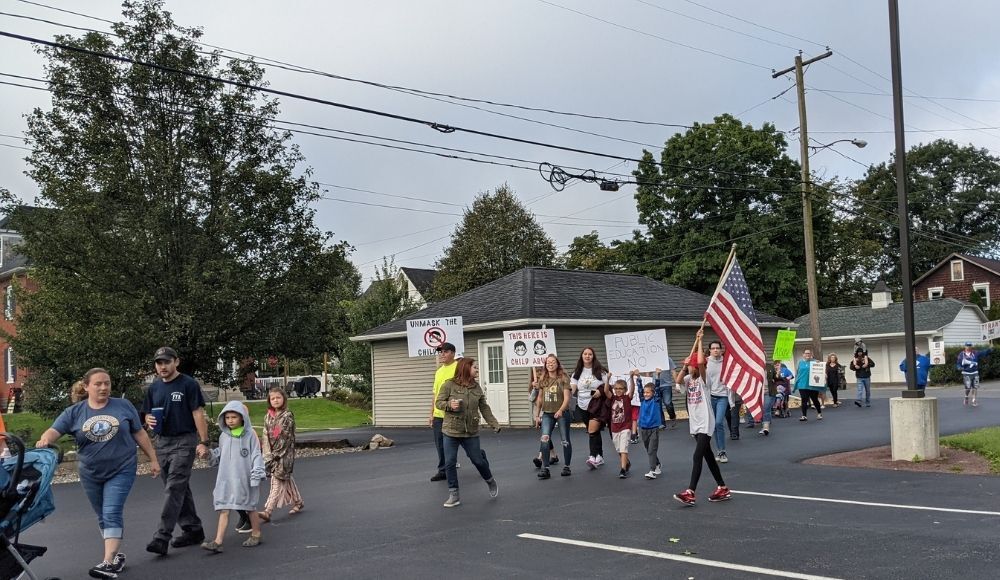 Rumors swirled that similar protests were occurring at Milton and Loyalsock school districts, but NCPA reporters did not find evidence of protests at those schools. 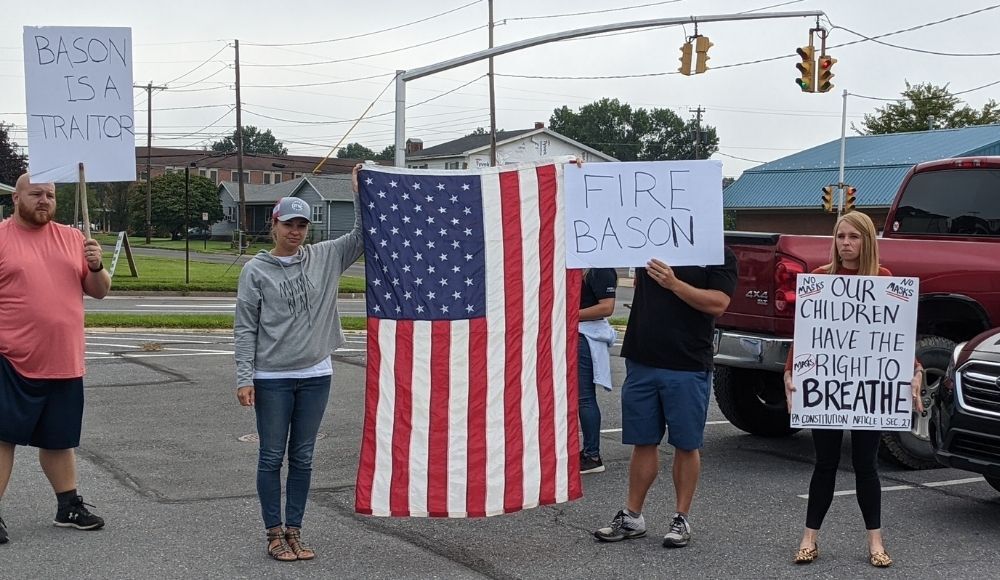 The school superintendent did not return our request for comment.

Montoursville, Pa. -- Students returned to classrooms across the state today, masked once again, as ordered by the acting Pennsylvania Secretary of Health.

Governor Wolf announced via a press conference on August 31 that masks will be required to be worn inside K-12 school buildings, early learning programs, and child care providers beginning September 7. The order, according to the state, is in response to the rising cases of COVID-19, specifically the Delta variant.

As the students returned, protesters in Montoursville rallied.

Carrying signs and chanting "no more masks,' the group, including children and adults, walked around the high school and continued to McCall Middle School on Willow St. in the borough.

Brenda Oberheim, a parent of two children in the Montoursville school district, has voiced her concerns over masking at previous school board meetings, and was present at the protest on Tuesday after dropping her kids at school.

"This morning I walked my kids up and I had a note," said Oberheim. "My note said, 'my kids have a medical exemption, do not mask them for any reason.'"

Her children weren't immediatly allowed in the school, Oberheim said.

Part of the problem: an exemption form that became available on the school district website late last week. Oberheim was told that she would need that form, signed by a doctor, in order for her children to attend school Tuesday without a mask.

Oberheim said making a form that requires a doctor's signature available on a Saturday of a holiday weekend for school attendance the next Tuesday put parents in a difficult situtation.

The form indicates that a student is "medically, cognitively, or emotionally unable to wear a cloth mask or a face shield for the entire school day, including on a district bus/van," and requires a doctor's signature. The form also states "Students who already had a doctor's excuse from last year do not need a new excuse."

Oberheim's two children, ages 10 and 11, were exempt last school year, and were eventually let in to the middle school Tuesday morning, but she feels that if she hadn't have been there to advocate for them, "it would have been a catastrophe."

The CDC has issued a strong recommendation for masking of all persons, teachers, students and staff, within the nation’s schools, regardless of vaccination status, to create a multilayered approach for fighting COVID and to keep our schools open for in-person education.

In addition, the American Academy of Pediatrics (AAP) has also strongly recommended masking in schools.

Finally, recent studies have shown that mask-wearing in schools has contributed to lower levels of COVID-19 transmission among students and staff and allowed for the continued in-person attendance.

Requiring face coverings in schools, therefore, balances the concerns for the mental health of our children with the need to protect them against a disease that is growing more virulent as we struggle to protect the most vulnerable members of our population.

In accordance with the recommendations of the CDC and the AAP and based upon the rising case numbers and hospitalizations in general in the Commonwealth, including the number of cases in our children, as well as the need to protect and maintain in-person education for the health and well-being of those children, I am issuing this Order to protect the ability of our schools to continue to educate our children, and of our children to receive in-person instruction in the safest environment possible.

Order of the Acting Secretary of the Pennsylvania Department of Health

Protesters carried signs that said, "Unmask our children," "I do not co-parent with the government," "masks are not backed by science," "It's not about health, it's about control," in addition to slogans calling for the firing of school Superintendent Christina Bason.

A call to Bason for comment was not returned to NorthcentralPa.com.

The safety of mask wearing continues to be at the center of the dabate.

"The rest of the world is walking around unmasked, but our kids have to sit in school in masks because the state has that control," Oberheim said, pointing to the inconsistencies in mask mandating.

"The masks are harmful to children. Children are not at high risk for spreading COVID in any way," Oberheim said.

These statements, however, are ones that become contested.

Lycoming Physicians, a coalition of local physicians from a variety of practices and specialties shared recent results from what has been the largest study to date on the effectiveness of masking.

Scientists at Yale, Stanford, and UC Berkeley studied a population of 350,000 people in 600 villages in Bangladesh in the first randomized trial to examine the effectiveness of face masks at reducing COVID-19 in a real-world setting, where mask use may be imperfect and inconsistent.

The results indicated that increased mask-wearing via a community-level mask distribution and in-person pro-mask campaign, they found a significant reduction in the percentage of people with COVID-19, based on symptom reporting and SARS-CoV-2 antibody testing.

According to Tyler Wagner, public relations manager at UPMC, the health system is reporting an increase--though slight--in the number of pediatric patients at UPMC hospitals due to COVID-19.

System wide, providers are treating 399 inpatients who are positive for COVID-19, with 23 are in northcentral Pennsylvania.

“The delta variant has been a lot more infectious and contagious,” commented Dr. Camille Sabella a pediatric doctor in a publication by the Cleveland Clinic. “It’s much easier to transmit than the previous variants that we’ve seen.”

Mask mandates are as much in place to protect school children as they are to protect the teachers, school staff, and community at large, doctors say. While children are less susceptible to severe illness, they are able to carry the variant.

UPMC's Wagner said, "as COVID-19 continues to evolve, UPMC encourages families and the public to vaccinate themselves and their children who are eligible as soon as possible. The best ways to minimize the spread of COVID-19 are by taking the vaccine, masking, and social distancing."

But mistrust in the Department of Health's data is rampant, and many are calling for autonomy.

Republican legislators agree, writing, "based on the governor’s comments earlier this summer that masking in schools should be a local decision, school boards across the Commonwealth spent the last several weeks working with health care providers, parents, and students to put protocols in place that reflected the needs and priorities of their districts.

"As a result, 195 districts voted to have some type of masking policy, 304 made it optional and one was still undecided," legislators have written.

"Parents should have the ultimate control over anything that is done to their children. There's no informed consent that is signed to allow them to do anything medical to our children," Oberheim said.

"This is all last minute," Oberheim said. "It's like [Wolf said], 'now I couldn't get to you any other way, and you weren't going to listen to me, so I'm going to stick it to you and your kids and cause this whole mess right when school starts."

"Wolf is lying to try to put masks on our kids," said Oberheim. If kids need a note signed by a doctor to be able to go without masks, "Doctors should sign off on Governor Wolf for what he's doing here."

Cloudy during the evening. A few showers developing late. Low around 45F. Winds light and variable. Chance of rain 30%.