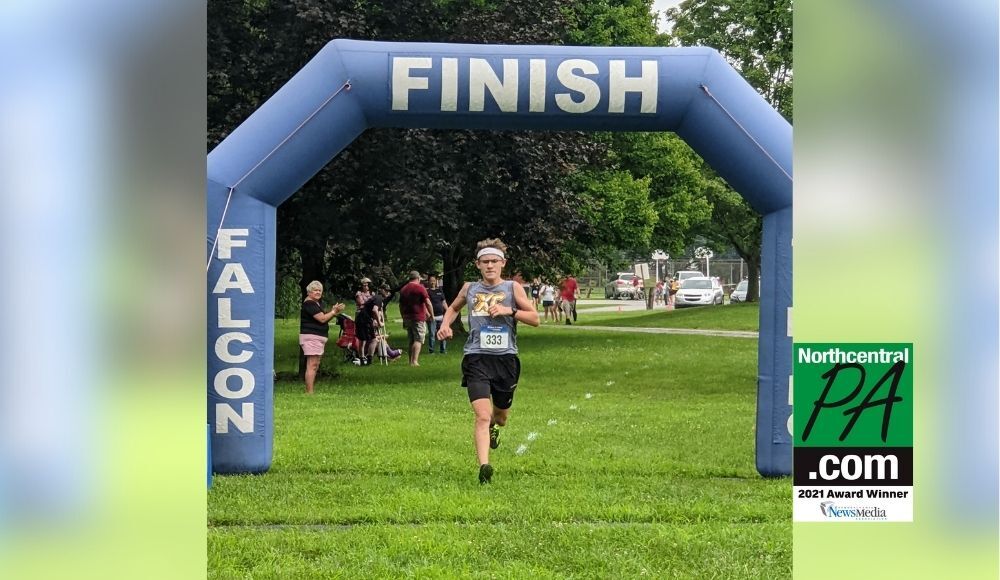 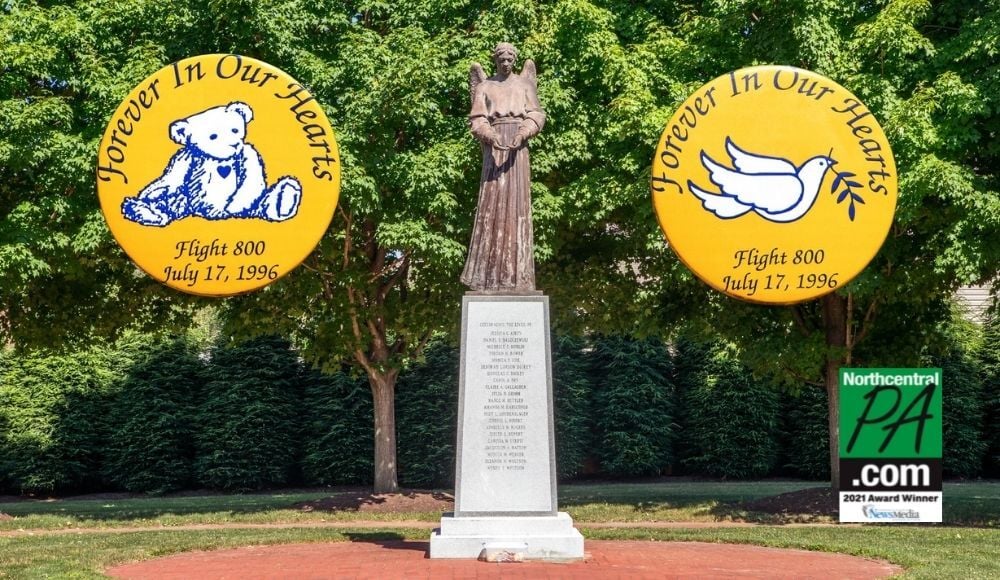 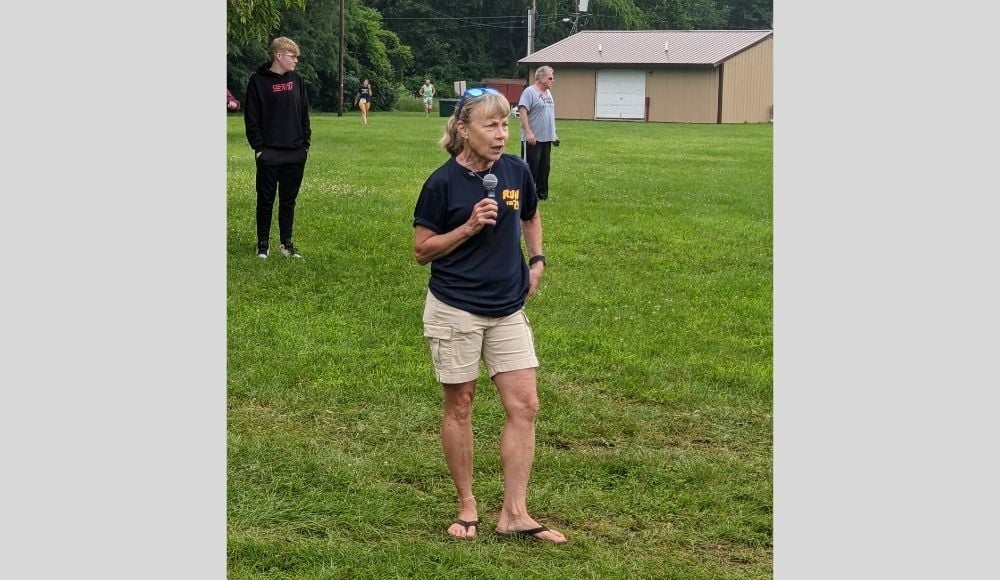 Stephanie Bedison addresses the crowd at the start of the Flight 800 Memorial 5K/walk in Indian Park, July 17, 2021. 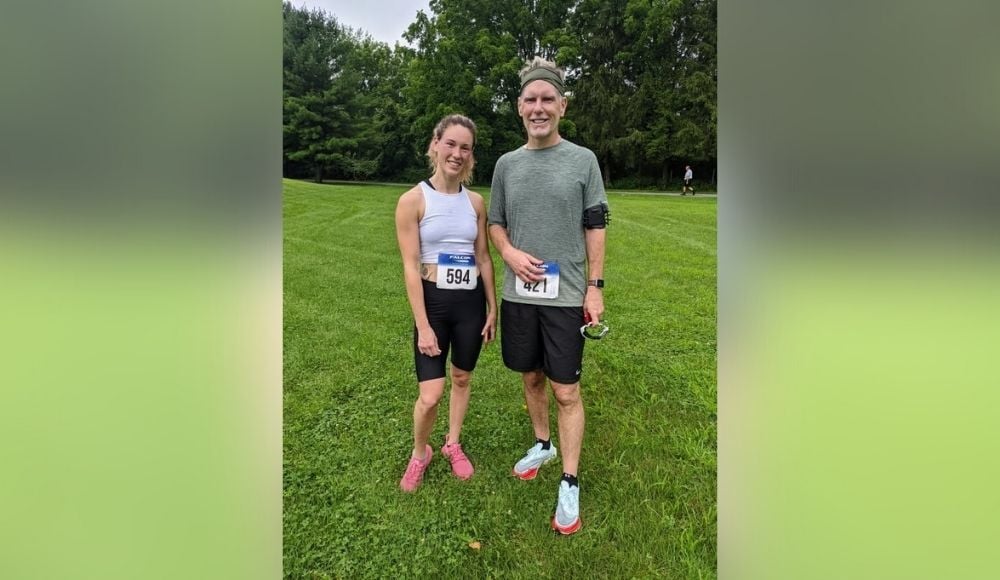 Montoursville, Pa. -- Crossing the finish line of a 5k race first is becoming a habit of Weston Fry, 14, an upcoming freshman at Montoursville Area High School.

Saturday morning he did it again in Indian Park at the Flight 800 Memorial 5K with a time of 18.20. He was proud, he said, because he put in the work, and it paid off. But at 14, attending the school that lost 16 students and five chaperones 25 years ago on Flight 800 bound from New York to Paris, France, he was more proud to run it today in honor of those who couldn't.

"This is the race I've been training for all summer," he said. "For the people who could not run today. That's what makes me proud."

A Jordan M. Bower scholarship was also established for seniors at Montoursville Area High School, recognizing seniors who demonstrate an interest in track and leadership abilities. Seniors Erin Witter and Alivia McDonald were this year's recipients.

Holly Robertson of Williamsport was the first woman to cross the finish line Saturday morning with a time of 21.40. She was just five years old when Flight 800 crashed. "I remember like anybody else. I was a kid at home watching TV. As a kid you don't process it the same way, but it's still ingrained in your mind."

But describing the experience, to run among all of the people who came out to show their love and compassion for everyone who was lost, was enough to get Robertson, who is training for a triathlon, to choke up. It's not the personal connection, she said, but rather the cumulative show of support that was most important.

According to race organizer Stephanie Bedison, who was the Montoursville cross country coach in 1996, "today ran like a well-oiled machine." While her energies were clearly devoted to running a smooth event, the emotion in her voice was palpable as she welcomed the runners and supporters.

"In this town, no one struggles alone." It's a motto that Amy Rinker, co-founder of Helping Hands For Hudson coined. Rinker is the mother of Hudson Rinker who lost his battle to cancer just a few days shy of his second birthday. "It couldn't be a more appropriate motto for Montoursville," she said, acknowledging a community that continues to support their own.

Amber Lowry, head coach of Montoursville's cheerleading team, and 20 members of the team spread out throughout the course to pump up the runners. "We don't have running specific cheers," Lowry said, but the team didn't want to pass on the opportunity to show support. 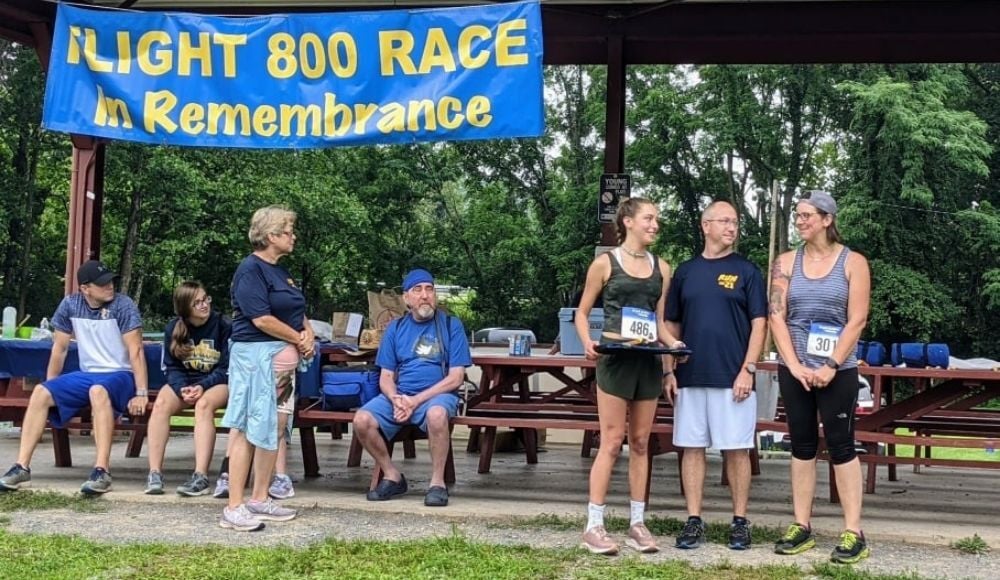 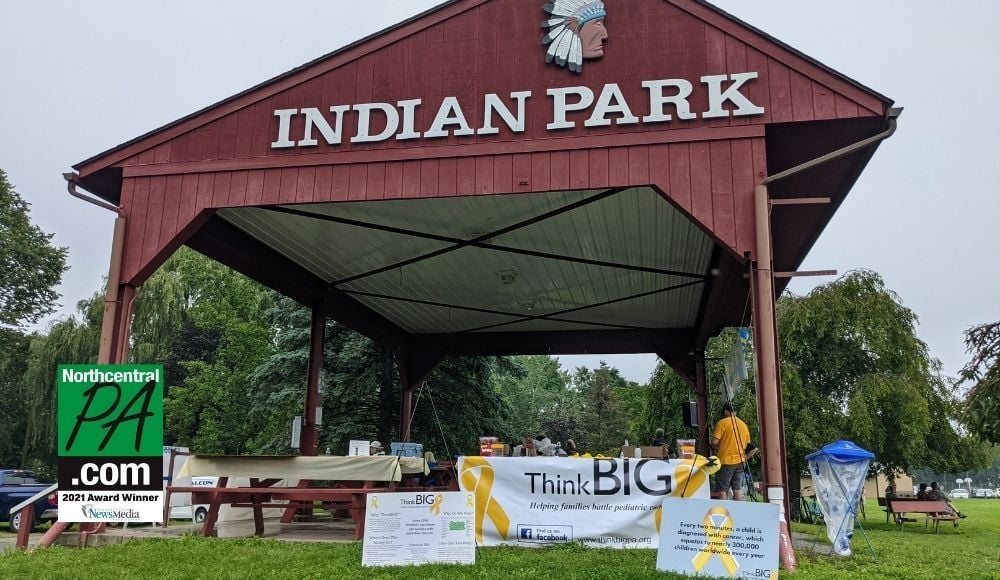 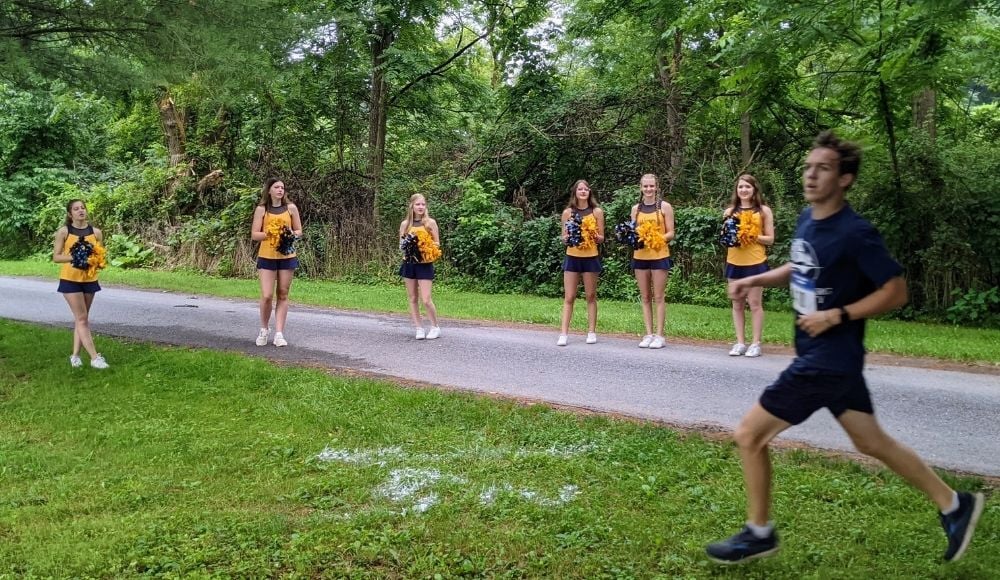 More pictures from the 5K in Indian Park, Montoursville.

In addition to the 5K runners, a group of walkers were on hand to walk in honor and memory of the 21 lost.

The community draws together each year to pay special honor to the lives lost that day. It's a day that many spend performing random acts of kindness.

Anthony Frey was a member of the class of 1996 and one of the organizers of the Flight 800 Memorial event.

"Twenty-five years ago this month my world, as well as my entire community's, was turned upside down when TWA Flight 800 crashed," he wrote on Facebook. For the last 9 years people from our community have been doing 'Random Acts of kindness.' It doesn't have to be anything big. If you'd like to participate, print out the paragraphs below, do whatever your heart tells you to do, and leave the note explaining why.

And although this 25th anniversary draws special recognition, "It's the same today as all the other anniversaries," said Montoursville Mayor Steve Bagwell. "Every year is meaningful."

In memory--forever in our hearts

Flights from Williamsport to D.C. and Chicago may soon be a reality

Steve Bagwell has captured the Flight 800 Memorial in Montoursville in all conditions. Summer, fall, winter, spring. Moonlight, sunlight, at d…