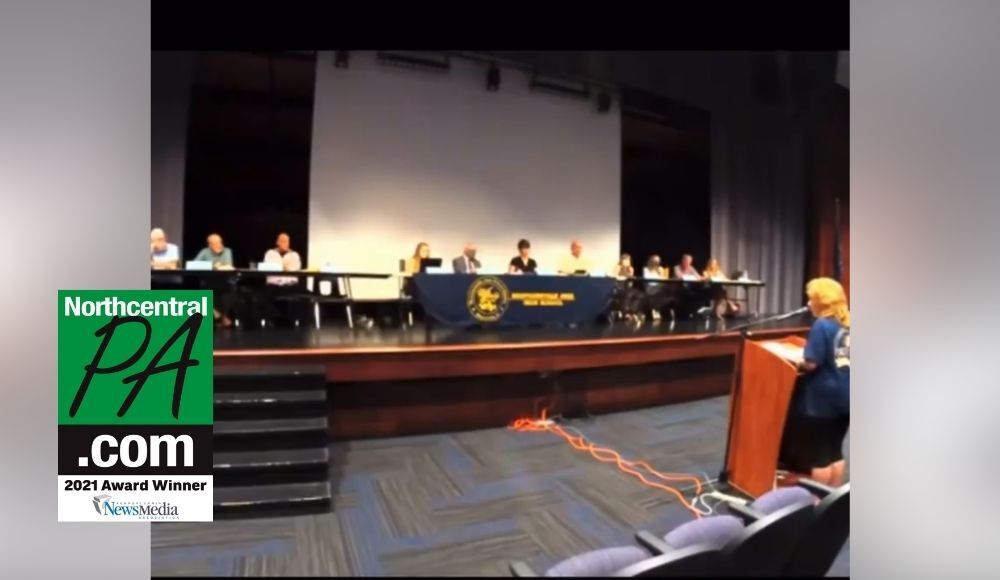 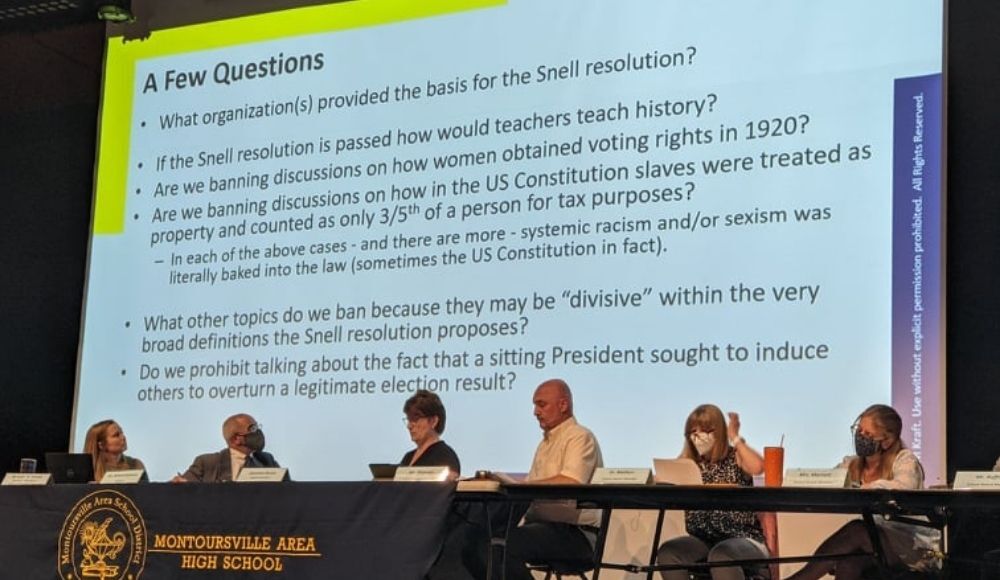 A power point presentation by Michael Kraft of Montoursville posed questions to the board members Tuesday night during a heated debate about Critical Race Theory.

"Snell Resolution" that appeared in the Aug. 10 MASD school board meeting agenda.

Montoursville, Pa. -- The concept of "Critical Race Theory" went undefined yet was highly contested during a nearly three-hour School Board meeting on Tuesday.

Most notably, a resolution, dubbed the "Snell Resolution" after Board Member Ron Snell who introduced the document, was met with more overall support than opposition, yet still failed to pass during the meeting.

Intellectual movement and loosely organized framework of legal analysis based on the premise that race is not a natural, biologically grounded feature of physically distinct subgroups of human beings but a socially constructed (culturally invented) category that is used to oppress and exploit people of colour.

Critical race theorists hold that the law and legal institutions in the United States are inherently racist insofar as they function to create and maintain social, economic, and political inequalities between whites and nonwhites, especially African Americans.

The reason: the nebulous nature of the language within the resolution's statement. Gray areas, undefined paramaters, and ambiguity within the copy, put several board members on alert.

The theory itself was not defined in a way that appeased either side of the aisle. In fact, a true definition was not offered by any speaker at the meeting. Michael Kraft of Montoursville, offered a presentation on Critical Race Theory (CRT), identifying the subject as a means of informing policy reform in government.

"CRT is an uncommonly taught law school/graduate level sociology topic that is neither in the Commonwealth of PA curriculum expectations nor is it appropriate for K-12 study."

Nikki Young, associate provost for Equity and Inclusive Excellence at Bucknell University offered a similar viepoint. "CRT is an academic study within higher education," she said. "How people engage with the concept is more likely to be in a high school curriculum."

More appropriate, Young said, is instead of tackling the construction of a "notion of race," she said schools should be asking, "does this curriculum apply to everyone? Is it accurate? Is this a narrative that leads to futher oppression?"

Teaching more inclusive, "closer to accurate," less "leaving out" of the narrative of underrepresented races is not the same concept as CRT, according to Young.

"Re-structuring how we're telling stories of race in America," should be part of the conversation in schools, Jocelyne Scott, director for Equity and Inclusive Excellence at Bucknell, added.

When the motion was put up for vote Tuesday night by Snell, not one board member followed with a second, leaving the issue to die on the floor. It was the language within the resolution, according to a few who explained their hesitancy, that gave them pause.

"I'm against anything that promotes division of people based on color of their skin," said school board member Bill Ruffing. "I never saw an issue with more gray area than with CRT."

Who decides who disciplines teachers who teach content that is deemed within CRT curriculum? Who even decides what CRT curriculum is? He questioned. "I see no need for it."

School board Director Dave Shimmel agreed. "I have confidence in the staff to teach kids how to think critically. This [resolution] is not needed. It's an insult to staff to say we need this," he said.

Community members came to the podium in support of the "Snell Resolution" before it was put to vote.

Karen DiSalvo, local attorney asserted that "Critical Legal Studies" is the backdrop to CRT, and that the theory "is rooted in Marxist ideology. We're indoctrinating our children to hate Americans," she said.

Montoursville resident Catherine Burns said the foundation of American Democracy is not being taught in schools anymore. "We've cancelled God and replaced him with Satan," she said, referring to CRT as "racism on steroids."

"Whether they know it or not, they're trying to push an agenda that's divisive and political," said Brenda Oberheim. "We need more than the district's word" that they won't allow the "divisive and wrong" message that she said CRT promotes, "we need this resolution."

"The goal is division," said Kyle Taylor. "[CRT] breeds resentment because it presents an unwarranted victimhood mentality. Perceived racial disparity doesn't hold up to fact or reason," he added.

"The truly oppressed, those who are minorities, deserve the real root of the problem," Taylor said after the meeting. "Instead of investigating what caused the disparity, we just assume racism," he said, advocating a "more rigorous" curriculum that "actually works."

But long-time English teacher at Montoursville Area High School, Cindy Wentzler, questioned what would be ok to teach and what wouldn't under the resolution. The goal of studying literature, after all, is to explore issues considered "Divisive Concepts relating to Sex, Race, Ethnicity, Color or National Origin."

"If we couldn't discuss texts because of one group [being at a disadvantage] to another, as a major theme, we'd lose: A Thousand Splendid Suns; The Kite Runner, To Kill a Mockingbird; Huck Finn; Jane Eyre; A Doll House; The Canterbury Tales; The Crucible; A Raisin in the Sun," she said.

"And arguments could be made that these are potentially divisive: Brave New World; Animal Farm; Of Mice and Men; Sold; The Glass Castle," she continued. "And that's just in English class. Imagine the ramifications in social studies. You can't talk about the election without it being 'divisive.'"

Wentzler noted the ambiguity of the definition of CRT as presented in the resolution. "As a professional, I know how to discuss a controversial subject without 'indoctrinating,'" a word used by many of the parents who said they were there to protect their children from "progressive rhetoric" and "activist propaganda."

Young, the associate provost at Bucknell, suggested practical issues for any K-12 school district to consider. "A change-up in the authors we read," she said. Also, who and how are we reading? What concepts are important, what resources are available, and what simple learning activities could we implement that relate to a more inclusive curriculum? What budget is in place for more inclusive learning materials?

"If there is no budget," she said, "they're saying we've already invested in the narrative we want to teach."