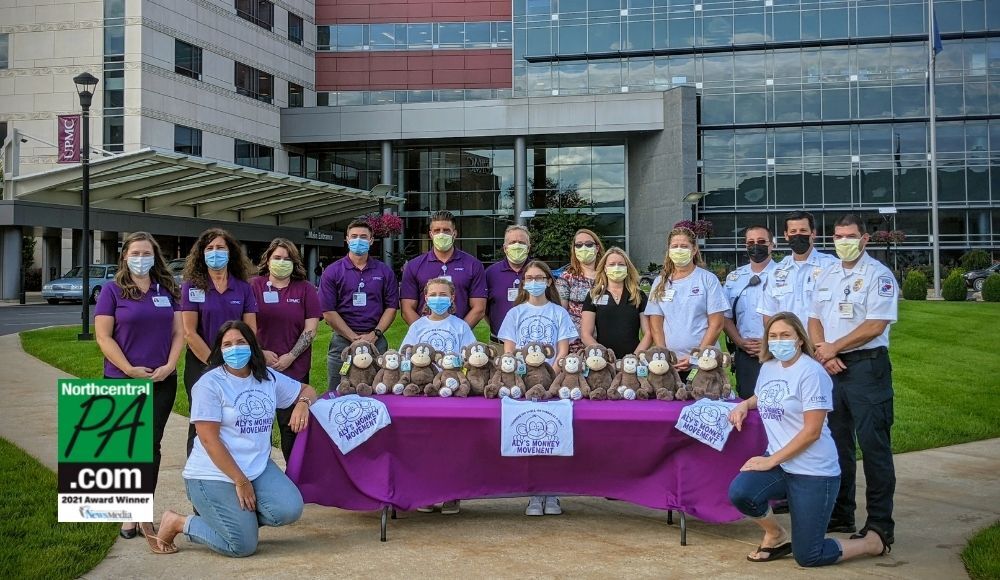 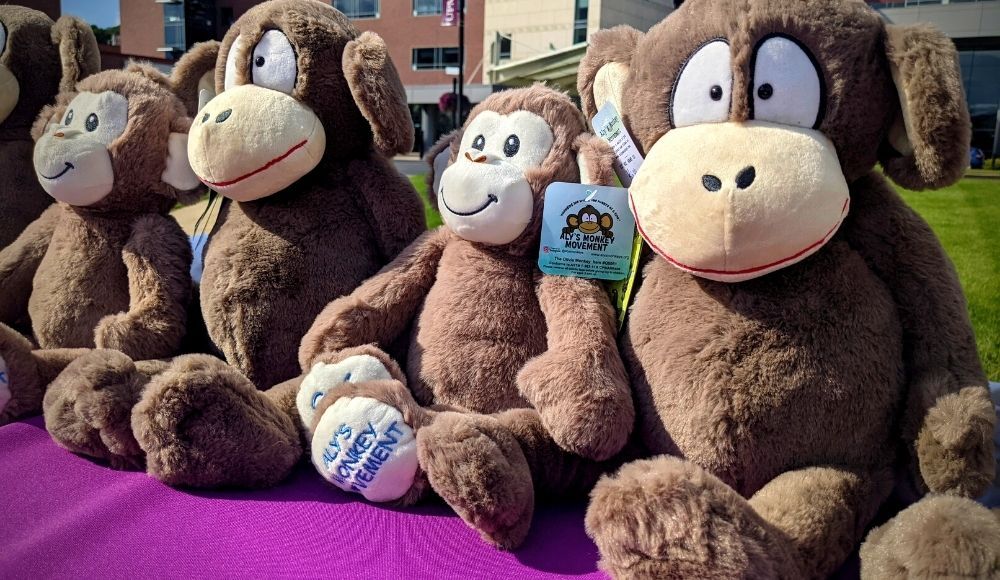 Monkeys have traveled as far as Fiji, the United Kingdom, and Germany, according to Kristy Creasy. The nonprofit sends the monkeys at no cost, but requests a shipping sponsorship to help defray mailing costs. You could sponsor an international monkey by visiting Aly's Monkey Movement. 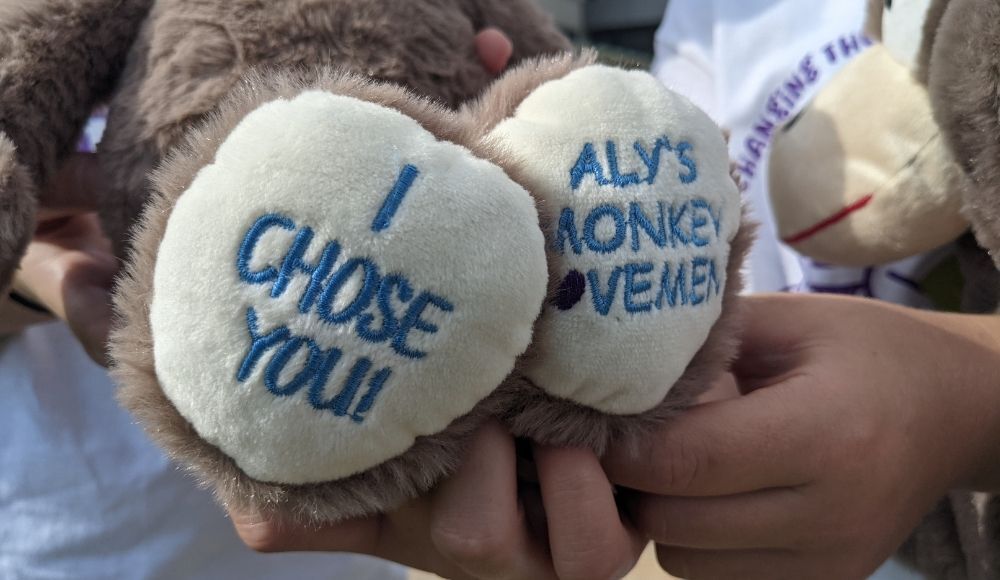 The "Olivia" is a new monkey in the gang, named after a young girl who died in a car crash. 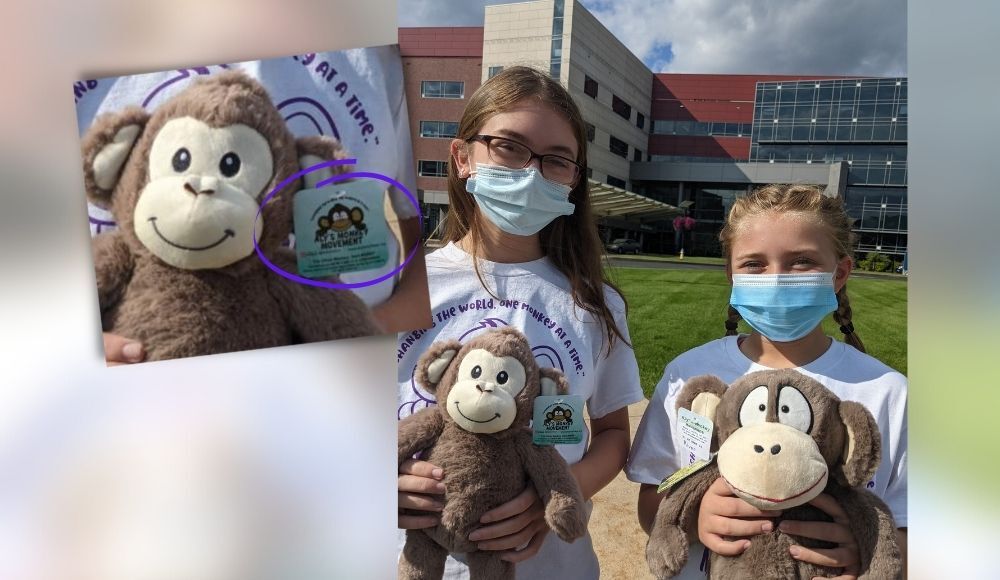 Aly’s monkeys all come with a personalized tag that includes the monkey’s name, which she names after the individual who sponsored that monkey. 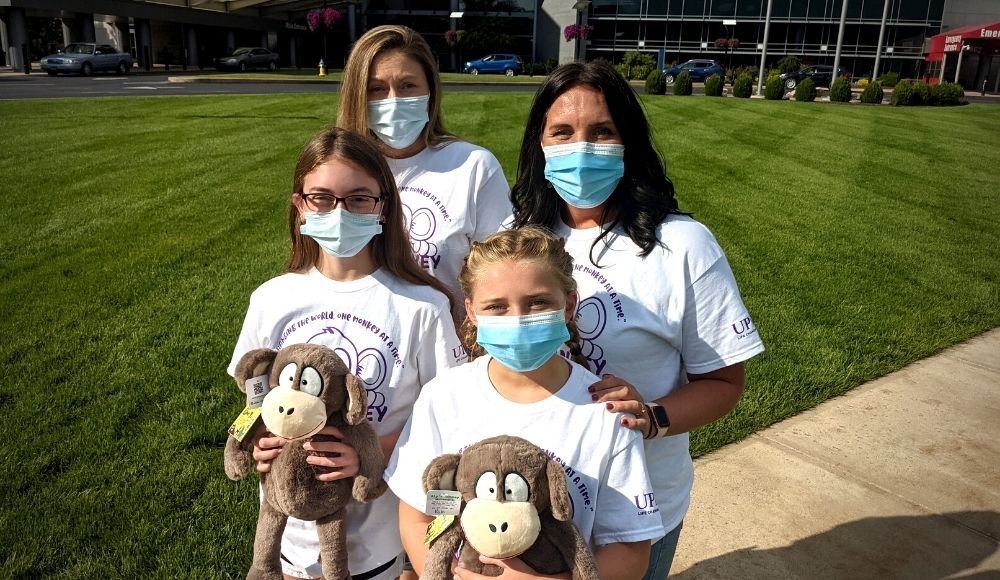 Williamsport, Pa. – Picture a monkey swinging through the trees. The trees help the monkey get where it wants to go. Without them, the monkey would have to walk the distance.

The trees in this story are the people who have helped one young girl named Aly change the world, "one monkey at a time."

On Friday afternoon, Aly, her mother Kristy, her best friend Ava, Ava's mother Jaimie, and a team of people at UPMC celebrated the results of "Monkey Month" at UPMC in North Central Pa.

It's like watching a forest grow. Let's back up.

Aly’s Monkey Movement provides stuffed monkeys to children and adults all over the world who may be experiencing a difficult time in their lives.

Whether the person in need has experienced the the loss of a loved one, or a diagnosis that leaves them hospitalized, or is a mom or dad gazing at their newborn through tubes and machines. The intention of the monkey is to provide comfort and joy in the midst of their fear.

Aly decided on monkeys because that's what she said she received from her nana when she was in the hospital, and the cuddly, soft, stuffed monkey made her feel better.

In 2019, Aly decided that for her tenth birthday, she wanted to do something different. She sacrificed a birthday party and gifts in exchange for donations to purchase as many monkeys as she could to hand out to boys and girls all over the world.

Aly and her team have now given more than 5,000 monkeys to families across Pa., the U.S., and the world.

The team includes Aly's family who have sacrificed to grow this nonprofit, including a spot in the driveway for a storage container to house regular shipments of monkeys.

Her best friend, Ava, who has teamed up with Aly to help shoulder the responsibilities of running a nonprofit as mere seventh graders who also like soccer, hunting, and dancing.

The providers at UPMC who deemed July “Monkey Month” in an effort to help raise funds to support Aly’s Monkey Movement. With a goal to sponsor 125 monkeys, equivalent to $2,500, they nearly tripled that goal and contributed $7,375 in sponsorships to the program.

Even Penn College student interns, according Aly's mom Kristy Creasy, who helped design and build the website that people the world over now use to contact Aly's Monkey Movement and refer someone in need of a monkey.

"We have some regular volunteers that'll show up once a week, twice a week. People who have monkeys at all times, that help move monkeys," Creasy said. "You know, team work makes the dream work," she joked. But in all seriousness, accepting help from the many volunteers is how the family can balance this passion and still be a regular family.

The passion has also spread to the UPMC team who have embraced the movement.

“Light radiates from that child, giving a moment of relief to the adult beside them and brings hope to the health care employee who spends day after day with people feeling their worst. These monkeys are the sunshine to a cloudy day, and we are forever grateful to Aly and her movement for brightening our world,” Teisher said.

Teisher works closely with Starlett Bixby, nurse manager of the Trauma team at UPMC Williamsport. Giving a child or a family a monkey is meaninful, explained Bixby. "For these families who might be shut down with confusion or fear or grief, bringing them a monkey makes everything less stressful in that moment," she said.

The simple gesture of giving a stuffed animal can open up a moment to help the family and the caregiver make a real and very important connection.

The Aly-Ava duo from Muncy and Hughesville are learning through the process. "It's hard work, tagging each monkey," Creasy said. "It's nonstop."

They're also inspiring their peers. Recently a young girl named Avery decided that instead of gifts for her eighth birthday, she'd raise money, and raised $800 toward the movement.

"I think the beauty in this is that it shows the kids how to give back to a world that is truly taking a lot from kids right now," Creasy said. "These monkeys will make a huge difference to so many children and seniors that are in need of an extra boost of compassion.”

SPCA Pets of the week: Nevaeh and Mama