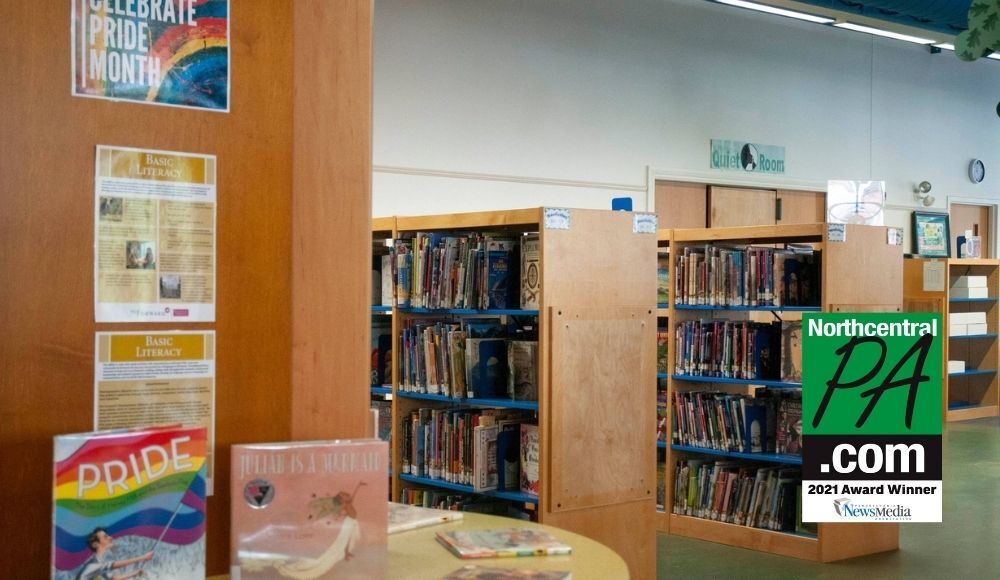 The display of materials recongizing Pride week in the Welch Family Children's Library. 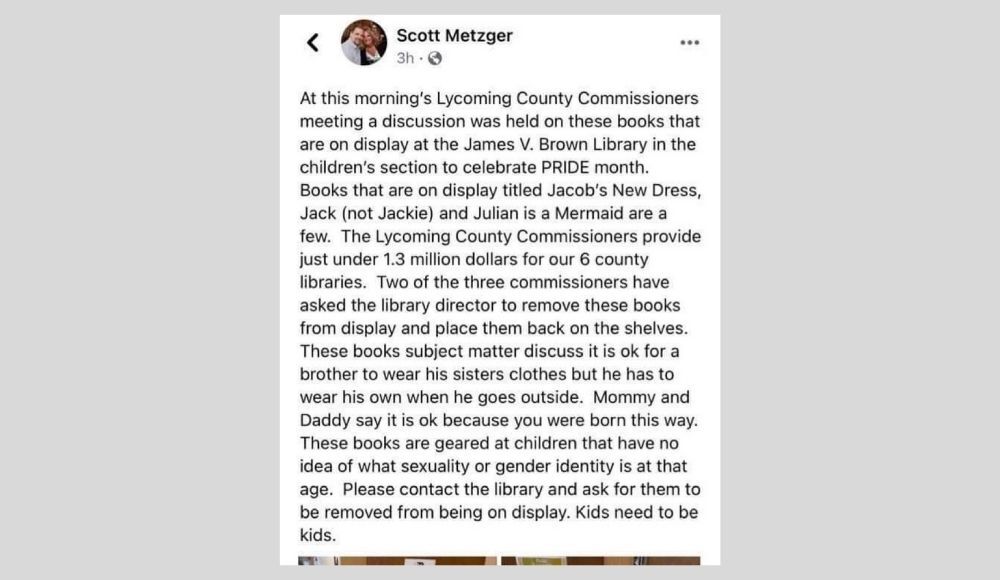 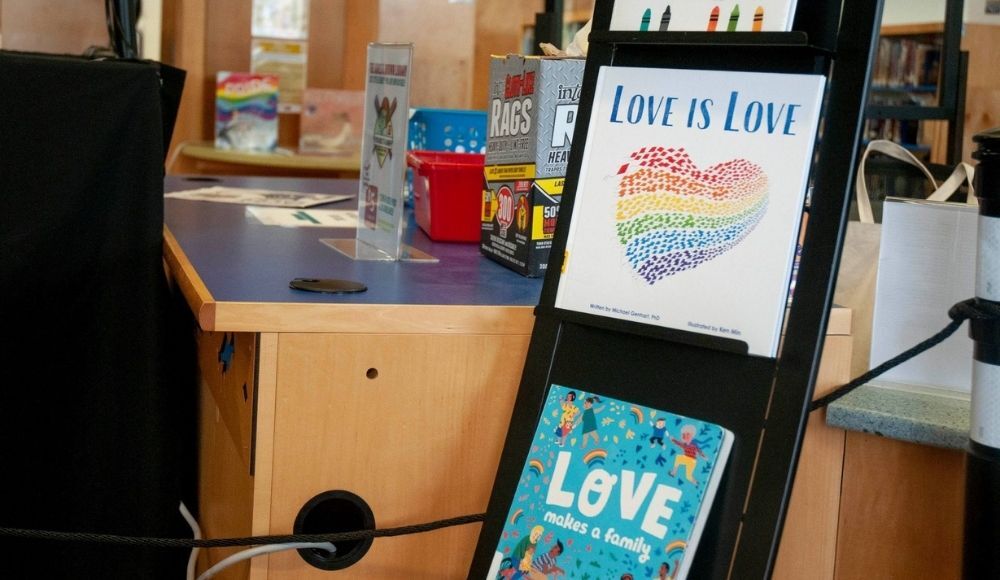 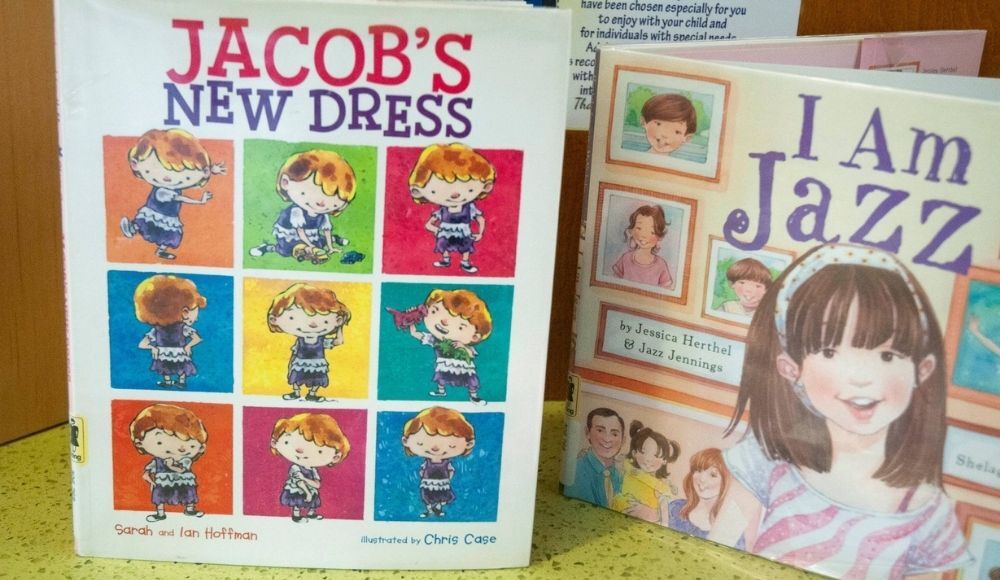 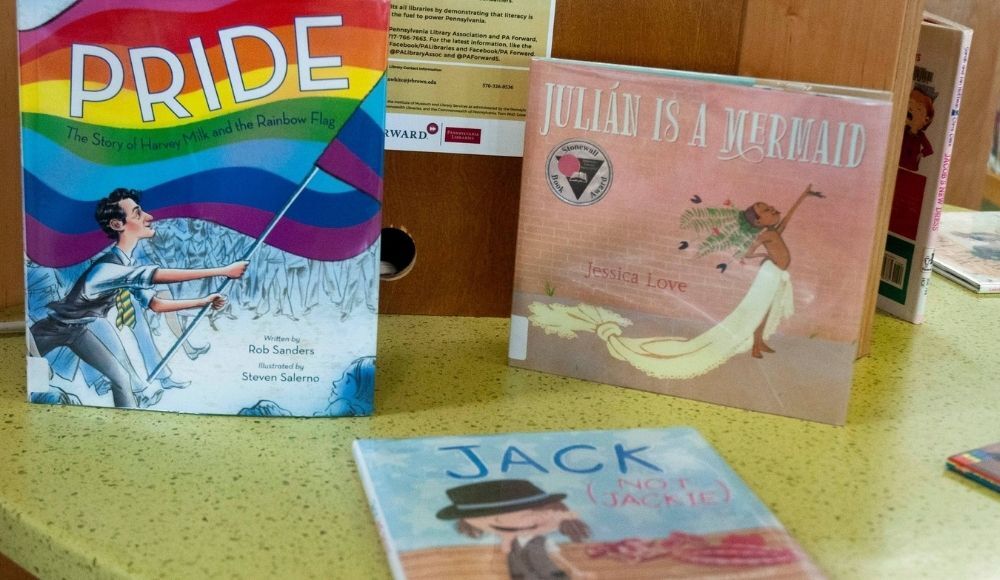 Williamsport, Pa. -- After a recent visit to the James V. Brown Library in Williamsport, Lycoming County Commissioner Scott Metzger shared a Facebook post that ended up garnering a lot of attention.

In the post, Metzger referenced a display of books in the Children’s wing. The display, in honor of Pride Month, sits on about three quarters of a small round table with eight or so books that address gender identity and equality for a young audience. Titles include “Jacob’s New Dress” and “Julian is a Mermaid.” Other books on display are titled “Love is Love” and “Love Makes a Family.”

Metzger wrote: “The Lycoming County Commissioners provide just under 1.3 million dollars for our 6 county libraries. Two of the three commissioners have asked the library director to remove these books from display and place them back on the shelves. These books subject matter discuss it is ok for a brother to wear his sisters clothes but he has to wear his own when he goes outside. Mommy and Daddy say it is ok because you were born this way. These books are geared at children that have no idea of what sexuality or gender identity is at that age.”

The post urged members of the community to contact the library about removing the books from the display to let “kids be kids.”

Metzger later removed the post from public view, but said it remains on his private page.

Metzger said he removed the post because of “the hate that people felt that the post generated.” He said the type of discussion happening on social media was not driving positive interactions.

“I want to have conversations with everybody. I will not tear a person apart, nor do I want them tearing me apart because of a difference of opinion. Let's have a conversation,” Metzger said. “ I want to hear what you've been through. I want to hear your life experiences. Maybe I can share my view with you and you can share me yours. That's what you need to have, not what was going on social media last night. That was inappropriate. And that's why I took it off, because it wasn't productive at all."

The Commissioners said their request to remove books from the display provoked support.

“I've had several private messages, you know," said Commissioner Tony Mussare. "‘Thank you for being the face of this,’ and ‘stand up, stand your ground.’”

On the flipside, there is a fair amount of outrage over the post.

A petition circulating online calls for the resignation of Metzger and Mussare. “Their logic is that because they have been elected to delegate where our tax dollars go, they also have the right to force their own archaic beliefs onto the publicly funded library. As soon as your personal opinions start to influence your decision making ability, you are no longer competent to complete the duties of a public servant,” the petition says.

Is the request to remove books from a display and back to their shelves, or further, to relocate children's materials to the adult section an infringement on the First Amendment? The American Library Association’s published Library Bill of Rights targets censorship head-on.

According to the ALA, “The First Amendment gives everyone residing in the United States the right to hear all sides of every issue and to make their own judgments about those issues without government interference or limitations.”

Libraries are obligated to serve the needs of an entire community, and elected officials can not take that right from the public. Hiding content, according to the ALA, is akin to restricting access.

The library routinely organizes displays to celebrate and bring awareness to various months, including Black History Month, Women’s History Month, and National Military Appreciation Month. Pride Month, according to the commissioners, puts materials in front of kids that is inappropriate for a young audience, but the commissioners say censorship is not at all their intent.

During their tour of the library, the commissioners asked, “how do I respond to a taxpayer that may not be in favor of this?”

Barbara McGary, executive director of the James V. Brown Library told them, “you would tell them that we're all inclusive.”

Metzger said, “I'm not in favor of censorship, I don't want books burned. A library is a library, everything should be included. But we asked to put it back on the shelf, that's what this is about, putting the books back on the shelf.”

Both Metzger and Commissioner Tony Mussare said as representatives, they have to listen to their constituents. “I have my core values still, and I listened to the people that put me in office, and a lot of people who put me in office said that they don't feel [these books] should be in the kids section, or they should be in the parenting section or on the shelf with the pride month books,” said Mussare.

Metzger said that after asking around, people were "outraged. Some people didn’t want any books on any of it.”

Their solution lies in compromise, the commissioners say. Compromise would include relocating the books from the display table back to the shelves, or perhaps more appropriately to the adult section. If children had questions, parents could decide which books to share with children. Metzger said he believes that teaching tolerance is a responsibility that lies with parents.

Is this risky material?

Mussare asked, "why should kids know about a lot of sexual things at that age?"

Books about gender identity and differences are not about sexual preference, however. Seeing books that represent a difference of any kind can be a lifeline, according to Licensed Clinical Psychologist Vanessa Hintz, Psy.D.

"The benefits outweigh any invisible risks," she said. "Kids understand difference and sense of belonging even at a preschool age. They're able to recognize differences in themselves and others."

Additionally, Hintz said, offering books that represent all kinds of differences in people increases a child's emotional intelligence level. "Somewhere along the line, people who display intolerance have learned to devalue people who are 'other,'" she said.

Having resources openly available does not harm non-questioning kids, but provides major benefits to those kids who are, said Dr. Hintz.

The James V. Brown Library did not respond to NorthcentralPa.com's questions about their placement of the books in the display by the time of publication.

"We represent everybody," said Mussare. "And we use their taxpayers money to support it. So when people come up to me and say, 'I don't want my tax dollars going there,' where's the compromise? Because I can't say I'm not going to fund the library, it is too valuable of an asset, but where is the compromise? And that's exactly what I asked for the other day.”

At the end of the day, it's up to the library's discretion, Metzger said, as to whether or not the display will come down. "They decide whether they would want to take it down or not."