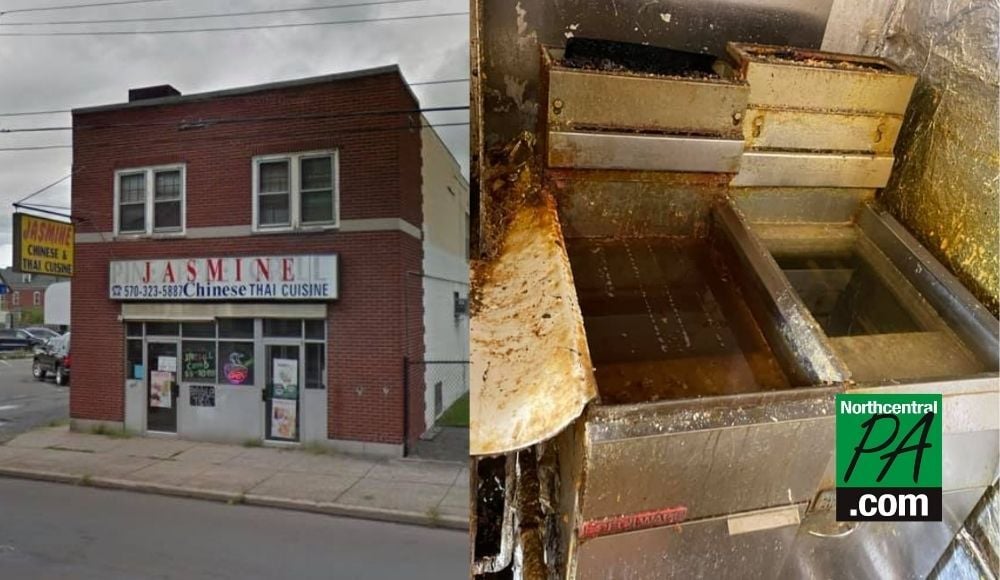 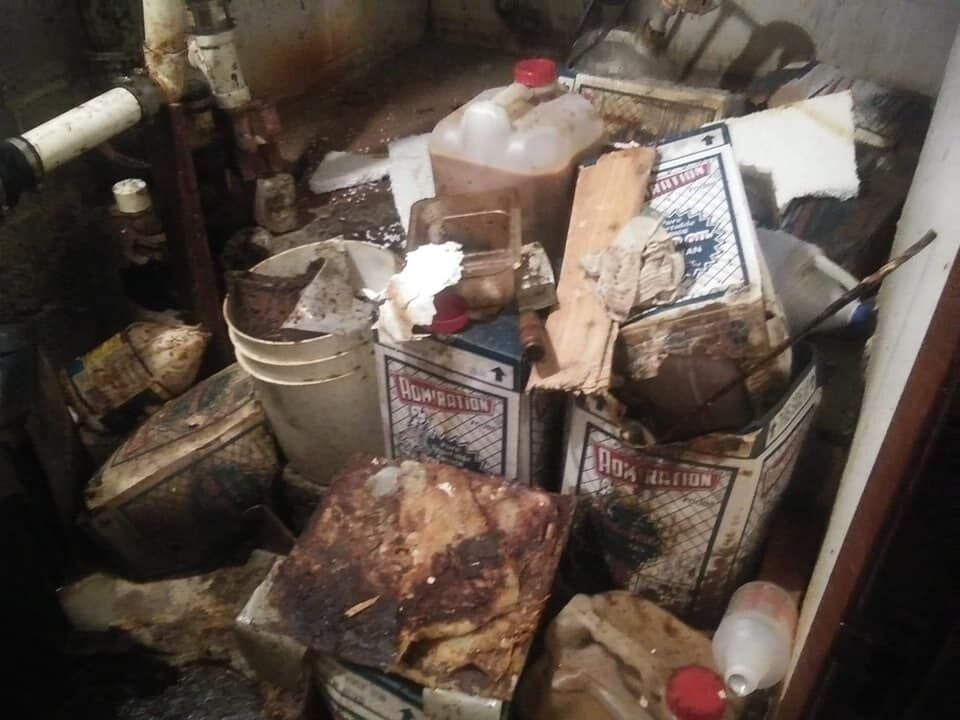 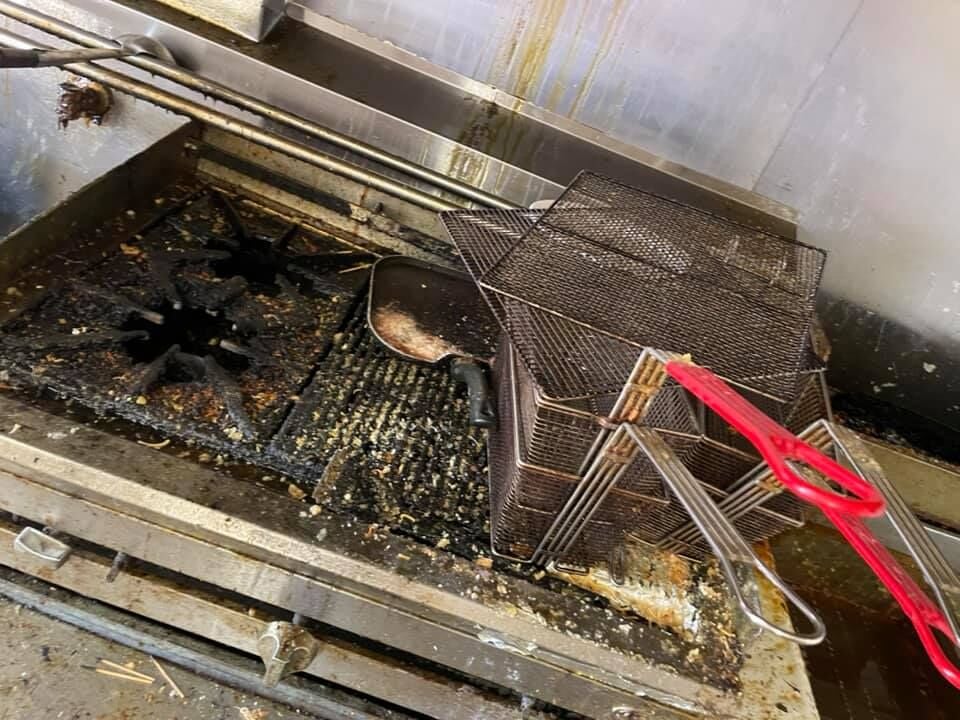 A photo posted by Zigarski of the stove. 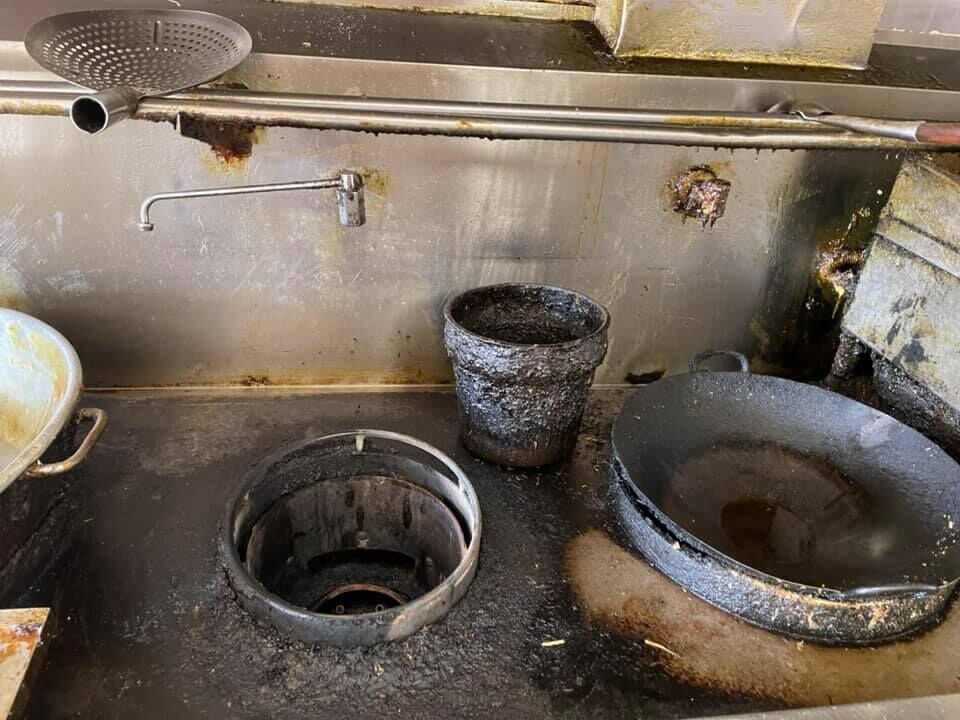 “I was appalled. There were just grease layers all over the walls and the floor. If you touched anything, it felt like there was a slimy layer on it,” said Sami Zigarski, describing the scene she and her boyfriend, Barry Signor, found when they entered the building at 331 Washington Blvd.

The location, up until April 22, had been the address of Jasmine Chinese and Thai Cuisine restaurant.

Zigarski posted photos and videos of the inside of the building to Facebook documenting the filthy conditions in which the former tenants and restaurant owners were cooking and living.

The owner of Jasmine Thai and Chinese Cuisine, Sammi Ynn, said the post was “all lies.”

Ynn describe the post as “heartless,” and said she has continually received racist hate messages and death threats since it was posted.

“They make up, it’s not true,” said Ynn. “It’s a fake story.” According to Ynn, the equipment shown in the photos was old and left there from the previous owner. Ynn said the restaurant had bought all new equipment–including a fridge, freezer, and cold storage–which they took with them when they moved out of the building.

In her Facebook post, Zigarski states that the previous tenants “took advantage of an 85-year-old Chinese man who owns the building.”

The elderly man is Williamsport resident, Hang Ping-Law. Ping-Law, along with his two sons, Zee and Chu, bought the building and began operating their family-owned restaurant, according to Zigarski. Then, Chu’s wife received a job opportunity to be a microbiologist in China, prompting the couple to move, and the family to close their restaurant.

Ping-Law and his son, Zee, remained in Williamsport to manage their rental properties, including the restaurant building in which the former Jasmine Thai and Chinese Cuisine was located, said Zigarski. In 2014, Zee, became sick and moved to New Jersey to be closer to treatment and his extended family.

Since Ping-Law does not speak English, Zee asked his long-time friend, Barry Signor, to help and Signor agreed.

As part of his work to manage the properties, Signor spoke with Joe Girardi at the Williamsport Codes Office in November 2020 to ask the office to conduct an inspection of Jasmine Thai and Chinese Cuisine, suspecting something was amiss, explained Zigarski.

“We had no idea how bad it [the restaurant] was at that time,” said Zigarski. “The grease trap in the basement was overflowing, with grease all over the basement floor. They [the tenants] were only supposed to be renting the restaurant part of the building. When we went in, we realized they [the tenants] had broken into the apartments upstairs and were living in them.”

However, Jasmine’s owner, Ynn, says this is also not true, and they had paid their rent. In fact, Ynn said the most recent rent check they mailed, for last month, was sent back to them by the landlord.

Zigarski said that in 2014, when Ping-law went to collect the rent from the tenants and owners of Jasmine Chinese and Thai Cuisine, they threatened him with a knife, told him not to come back, and chased him.

Ping-law explained-–with the help of his son, Chu, who translated for his father–-that he was “too scared” since he was old and lived alone to report the incident. Instead, Ping-Law had paid all the property taxes and fees out of his own pocket.

After learning this, Chu and his father decided to put the property in Signor’s name, so Signor could get the tenants evicted and the building repaired so it could be rented again. Once things are back in order, Zigarski said the plan is to eventually put the building back in Ping-Law’s name.

The paperwork took about a month, explained Zigarski. When the building was signed over, Signor told the tenants they were evicted and threatened to take them to court for the unpaid rent–nearly $250,000, according to Zigarski.

According to Ynn, she normally mailed the rental check directly to the landlord, Ping-Law. Ynn said one day she noticed a letter addressed to the restaurant from Hutchinson Construction Company, inquiring about potentially purchasing the building, which she mailed to the landlord.

Ynn said Hutchinson sent two letters inquiring about the building, which she made copies of to keep as documentation.

It was after these letters that Ynn met Barry Signor. The first time, said Ynn, Signor stopped by to introduce himself as the property manager. The second time, Signor gave Ynn an eviction notice.

“It’s all a fake story, the fact is they want us to move so they can sell the building for the Dollar General,” said Ynn.

Last October, the Williamsport City Council voted to permit Hutchinson to build a new Dollar General Store on Washington Blvd., next door to Jasmine Thai and Chinese Cuisine, despite some local opposition.

Hutchinson Companies, LLC. told NorthcentralPa.com they have no comment at this time.

On April 22, the restaurant stopped serving food and Ynn completely vacated the building.

Zigarski said the tenants were looking for a new location to re-open the restaurant, which is what prompted her to post the photos and videos of the interior of the building to social media.

“We’re not trying to get publicity; we feel like we have to let people know what they were eating out of. If I was one of their main customers, I would be very upset,” she said.

Ynn adamantly denies that the restaurant used the equipment in the photos. “They can do anything they want once we move out,” she explained. “If the restaurant was really that bad, we wouldn’t be able to open.”

Signor and Zigarski, however, believe the restaurant had not been inspected for years. “The amount of filth in there could not have built up in just one year,” she said. “We don’t understand why they were not inspected.”

By law, all eating and drinking establishments must be inspected once every year, according to the Pennsylvania Department of Agriculture’s (DOA) Website. An inspection record for Jasmine Thai and Chinese Cuisine could not be found on the DOA’s food inspection data page.

NorthcentralPa.com has reached out to Joe Girardi of the Williamsport City Codes Office for comment but at the time of posting has not received a response.

Ynn said she is currently living with a friend and is scared for the safety of her children as a result of the threatening messages she has received.

“I’m very, very sad. I don’t know why people believe it. People are acting very aggressive–so many strangers sending me curse words and death threats,” she said. “I have a little kid, if he knew we were in danger…I can’t even think about it.”

The Blue Collar Bookseller review: Pleasures of the Flesh