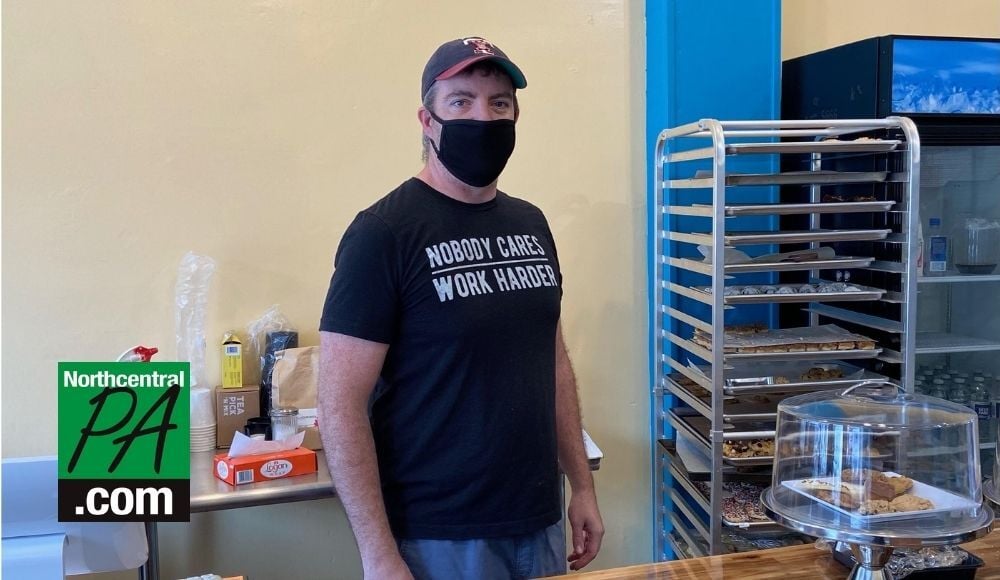 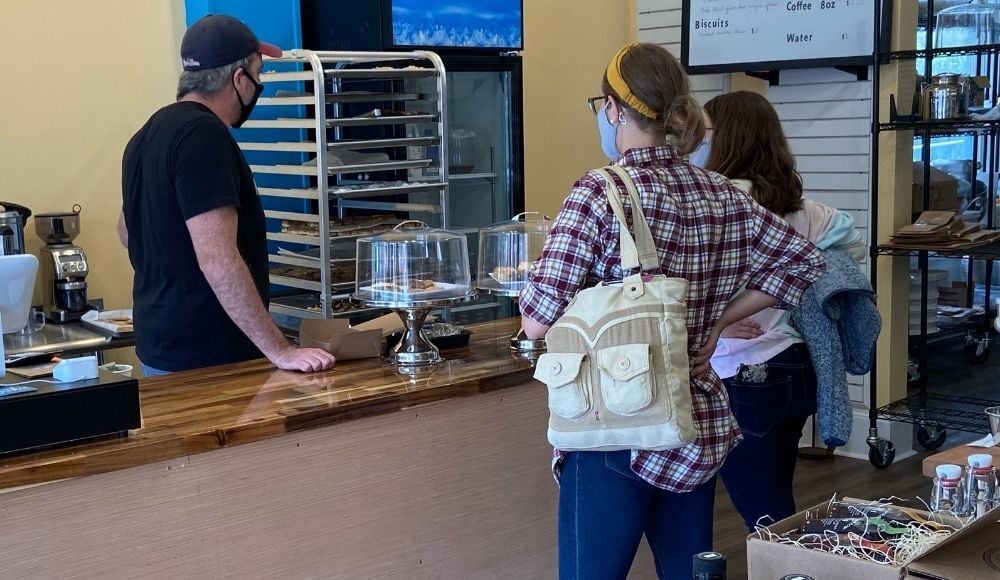 Dan MacArthur waits on customers at his bakery, The Cookie Dude, in Lewisburg. 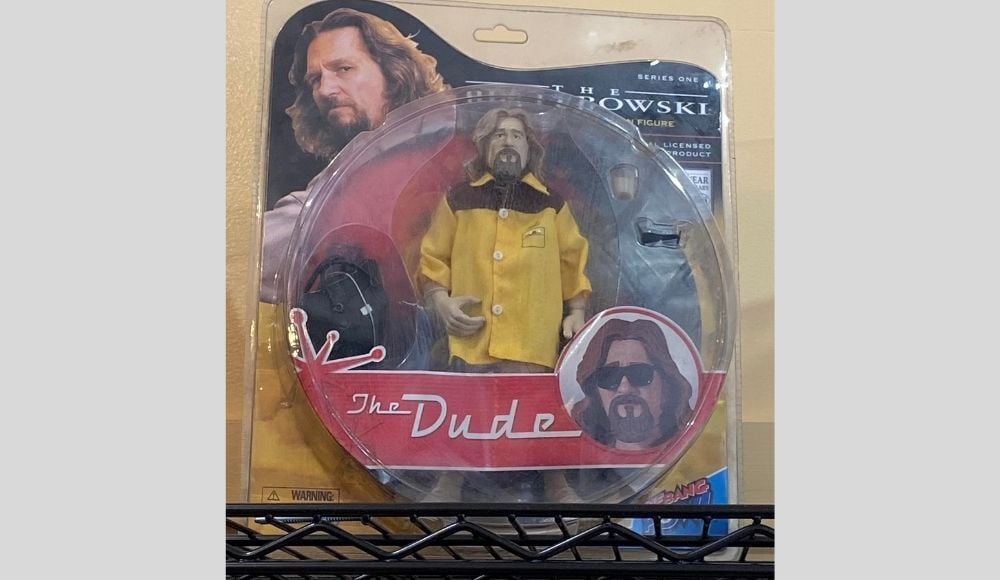 The Dude, from the movie The Big Lebowski, is an influence for The Cookie Dude's shop name.

Lewisburg, Pa. – Dan MacArthur, “The Cookie Dude,” wonders if someone should pinch him to wake him up from a dream.

That dream, owning a brick-and-mortar bakery, came true last month when he opened his shop, The Cookie Dude, at 335 Market Street in downtown Lewisburg.

“This is everything I’ve ever dreamed of as far as a career or job or anything,” MacArthur said. “I get to do it every day. I get to make biscuits. My hands are in flour all the time. It’s like really….it’s kind of, pinch me,” MacArthur said in a recent interview at his shop.

The Cookie Dude opened for business in Lewisburg on Sept. 12. Ever since then, MacArthur and his staff of four have been working in the shop seven days a week to fill orders.

MacArthur’s shop is located in the space of the former Purple Platypus toy store, which closed in November 2020.

“When this became available, this space, it was like the universe had a big arrow pointing to us,” MacArthur said.

MacArthur has wanted to own a food business since he was in his 20s. Originally, MacArthur thought about starting an ice cream shop. But when he realized buying equipment to start a shop would cost more than $100,000, he decided it was not realistic. Later on, after MacArthur began dating his now-wife, he ended up helping her bake cookies for a holiday exchange which would lead him on his current path today.

“We made spiced molasses cookies. It’s actually the same recipe we started with nine years ago,” MacArthur said, pointing to the cookies in his shop. “And everybody was crazy about those. And the next year we made chocolate crinkle with peanutbutter icing and a friend of ours was a chef and said, ‘Hey, you can sell these.’”

“I’d always harbored these grand delusions of culinary stardom, but that was the first time someone I trusted that I knew they knew their way around the kitchen gave that validation.”

Eventually, MacArthur had an inspected culinary kitchen installed in the basement of his home in Milton. He started The Cookie Dude business five and a half years ago not knowing what to expect. He began taking orders online with free delivery. Soon, MacArthur’s orders picked up. Parents of Bucknell University students found his information and began ordering for deliveries to their children.

MacArthur continued to hold a full-time job when he initially started the business. As orders increased, MacArthur made the decision to leave his job and make The Cookie Dude a full-time venture. MacArthur started taking his cookies on the road, to farmer’s markets, and the annual Lewisburg Arts Festival. “We still get customers who remember us from the Arts Festival,” MacArthur said.

His business was growing and the timing of moving into the Market Street location in July seemed right. “It made sense to come to Lewisburg due to the relationship with Bucknell, and it also worked with other businesses in the area,” MacArthur said.

Cookie flavors at The Cookie Dude vary weekly. Of course, there’s the old standbys such as chocolate chip and caramel shortbread. And then there’s whatever MacArthur thinks of that week. “It’s a bakery on a whim. It’s what we have going on,” MacArthur said, adding that some of the more unusual flavors he’s had include chocolate chipotle, Swedish Fish, and a cookie with Captain Crunch cereal.

The shop also has a cookie decorator, who has been making the popular Lewisburg lamp post shaped cookies. MacArthur said they’re “willing to make anything,” when it comes to the decorated cookies. “We just had an order for Scream masks. A woman’s nephew liked the Scream movie,” MacArthur said.

Many of the cookie names come from pop culture. The chocolate crinkle cookie with peanut butter icing is named Temple of Yum, which is a nod to the movie Indiana Jones and the Temple of Doom. The chocolate chip cookie is named The Original Dude. Named after The Dude, of course. Movie buffs may have caught onto the name, The Cookie Dude, as an ode to The Dude in the cult classic “The Big Lebowski.” MacArthur has several pop culture items in the shelves in his shop, including a Big Lebowski doll.

MacArthur likes The Dude because, “Nothing ruffles him. Nothing bothers him. In truth, I’m probably more like Walter. I’m like, turned up to number 11 all the time. I’m just amped up ready to go. But I want to be more like The Dude. I just want to go with the flow. And so, part of it’s a reminder to myself that you’re making cookies. It’s not rocket science. Nobody’s life is in danger. You should have fun with this,” MacArthur said. The Original Dude cookie, of course, is named that “because it really ties the room together.” (Big Lebowski fans should get this reference.)

For those whose mouths may be watering just thinking about cookies at this point, you may order traditional cookies on The Cookie Dude’s website with at least a couple days’ notice. For decorated cookies, two weeks’ notice is preferred and it’s best to call those in orders in at (570) 939-4241.

The Cookie Dude also offers vegan and gluten free cookies. In addition, the shop offers other baked goods such as biscuits. Of course, the holidays are around the corner and MacArthur expects orders to increase. “Ordering earlier is better,” MacArthur said.

If you’re a person who prefers to make your own cookies, MacArthur has you covered. The other side of The Cookie Dude shop is a bulk emporium, full of canisters of sugars, spices, sprinkles, and any other ingredients you would need to bake. “I wanted to give people multiple reasons to come in,” MacArthur said.

MacArthur and his wife travel often and have brought home various spices, salts, and oils from around the world which he’s now proud to offer at his shop. Coffee is another item that will be offered soon. MacArthur also likes to offer food items from regional small businesses, including maple syrup made by a family in Wellsboro and spices made in Elysburg. MacArthur feels that some people may prefer to make cookies or baked goods as gifts. “I really believe in the mental health benefits of cooking for others,” MacArthur said.

Making foods for others certainly has had a mental benefit for MacArthur. "I've worked jobs that were stressful for one reason or another and my place to unwind is in the kitchen or shopping for food," MacArthur said. He has his self-described “dream job” and business is growing quickly in his first month in the shop. “It’s really humbling. It makes the long days worthwhile,” MacArthur said.